Week two of DC’s Futures End month, and even fewer comps come through this week; of the ten issues released this week, only three were in the comp package (I did, however, get “review copies” of the cereals whose packaging was redesigned by DC artists the other month. No, really). Of the three I read, though, one was a definite hit, one was playing to its audience, and the final one was… well, I’m not sure whatever audience it was intended for, to be honest.

(Also: This is running late for the simple reason that I didn’t even get a chance to read all these books until this morning. I’m sorry, I’ll try to do better next week…)

Batgirl: Futures End #1: While I’ve not really kept up with Gail Simone’s Batgirl run as a while — I’ve been reading occasional issues and slowly following it in trade — there’s a wonderful sense of this issue being the ultimate Gail Simone Batgirl, in some way.

In one sense, of course, that’s entirely true; Simone herself described it as “the last Batgirl issue [she’ll] write, ever,” but there’s more to it: characters return from earlier in the run for desperate final gambits, characters appear who fans have been asking for for the length of Simone’s run to date — hey, remember Stephanie as Batgirl? What about Cass Cain? Here they are again! — and a sense of thematic closure to Barbara’s darkness (and arguably, her time as Oracle) is present throughout.

All of that makes the issue great for Batgirl fans, but for the rest of us, I’m unsure. There’s a lot of stuff happening in this issue, and at times it feels too ambitious, too packed with story and big dramatic events that arguably don’t even belong to the character — there’s a mini-arc with Bane that feels very much stolen from Batman, as opposed to organic to Batgirl in any way — or disposed of without due consideration. You can tell that Simone has a plan and is working towards a specific conclusion, but there’s a sense of this issue in particular being too rushed, too eager to get there. One for the fans, definitely — and one that arguably points towards where Simone’s going to go in Secret Six at times — but I’m not sure how it works as a standalone for newcomers.

Batman: Futures End #1: And here’s where I contradict myself to an extent, because this issue is filled with, if anything, more shout-outs, easter eggs and direct references to a whole bunch of DC comics — it’s a prequel to Scott Snyder’s story for Detective Comics #27 with Sean Murphy, for one thing, but it pulls in references to current Justice League stories, a set-up from Futures End and even shout-outs to the “Knightfall” storyline and a Villains Month issue from last year — but it nonetheless feels more complete, and more successful overall, than the Batgirl issue.

That’s almost entirely down to the execution which is, put simply, great. Grayson may be the more technically-accomplished of the Futures End books to date, but I think that this one may be my favorite overall: it takes a cue from the approach of Snyder and Capullo to the main series — an over-the-top-ness, for want of a better way to put it, a desire to play with tone, genre and visual aesthetic with the character that’s resulted in a series as over scale and colorful as anything Dick Sprang could’ve thought up — but isn’t a slavish copy. More than anything, this issue reminded me of a sci-fi version of Hawkeye over at Marvel, at least in terms of the way it looked (ACO’s art and FCO Plascencia’s colors are genuinely wonderful here). 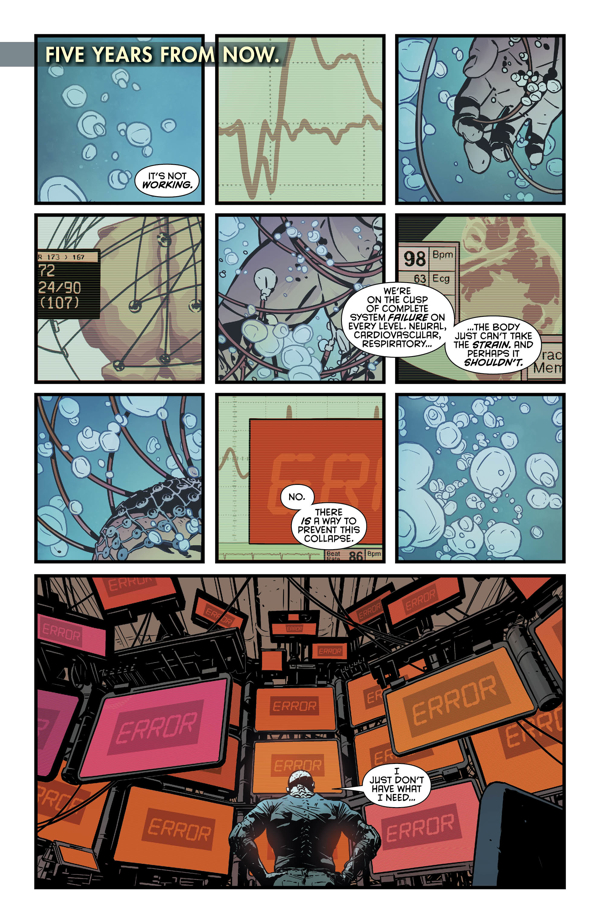 In terms of writing, though — this is a fun book, despite the fact that it deals with Bruce Wayne’s obsession with his mission and his inability to surrender to anything, even death. It is, in its way, Batman Beyond as buddy comedy heist movie, if you can imagine that, and somehow it works despite everything. Ray Fawkes, who’s responsible for the script and co-plotting with Snyder, comes out of this issue really well; more than anything else he’s done at DC to this point, this is something that makes him seem like someone to look out for in future (Yes, I know his Oni books are great; they’re a different beast to his DC work, though).

Worlds’ Finest: Futures End #1: Coming after that, Worlds’ Finest couldn’t help to be a letdown. Definitely the most pedestrian of the three books, and also the one that ties in closest to the main Futures End series — perhaps there’s a connection, he says, despite being a fan of the latter — it’s just a very bland issue that does nothing to advance any plot or character, but instead reiterates character beats (Power Girl is determined! Fifty-Sue is powerful and kind of a dick!) for twenty pages and kills time. There is so much more than could be done here, as either of the other two books I read this week demonstrate, but instead what we get is a book that feels as if it was constructed to fit into every “New 52” cliche even as the line is expanding way beyond that elsewhere. Very much a disappointment.