Previously on Drokk!: The last time we did an episode, we looked back at the past of the series with the fourth and final (to date) volume of the Restricted Files collections of ancillary Dredd stories, and it really, really wasn’t good. Both of us hoped things would pick up for this, the final episode of Complete Case Files reading, and… spoilers… it really, really did. 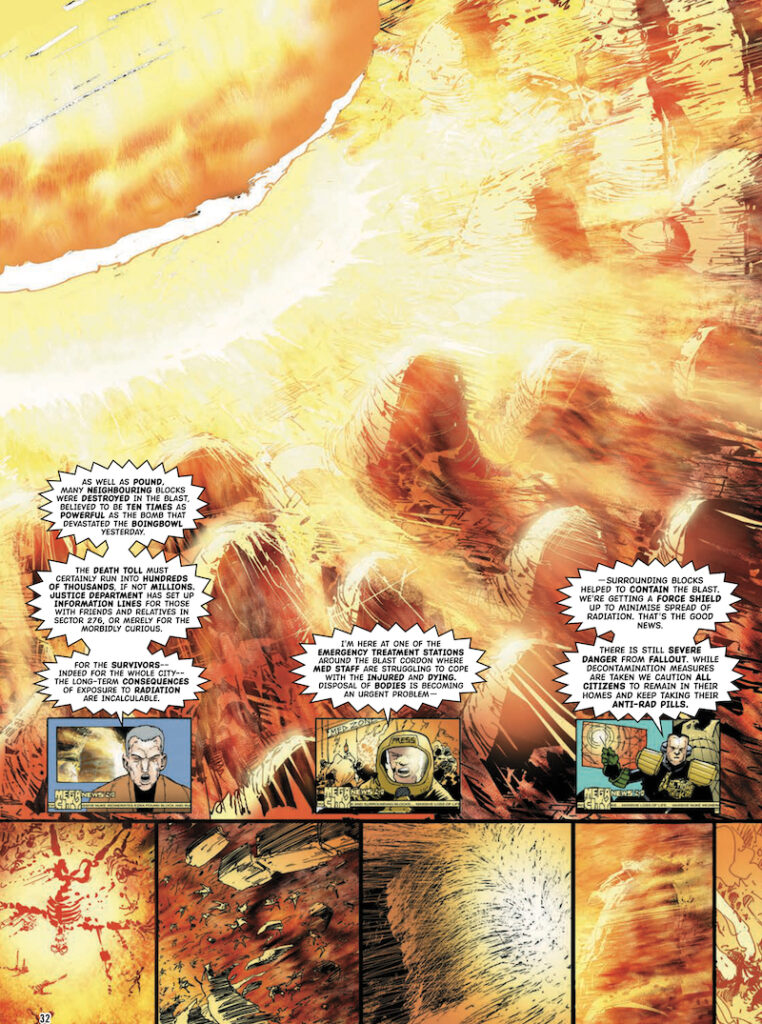 0:00:00-0:06:03: We introduce ourselves, and the fact that we’re talking about Judge Dredd: The Complete Case Files Vol. 40, a book published in the US within the last month, judging by the number of times we saw it on New Release shelves at the end of last month. We also quickly talk about how much we love the book, which is easily the strongest this series has been in a long time — and that’s not meant to suggest that it’s been bad up until now; this is just a really great volume. 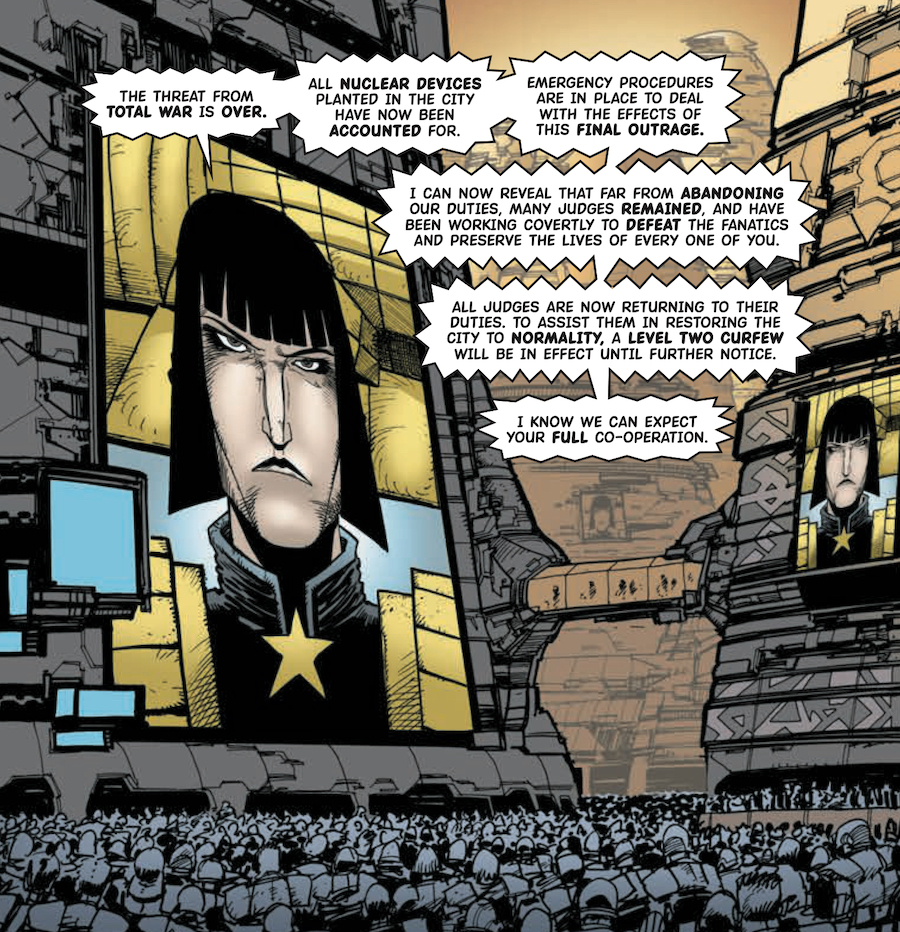 0:06:04-0:10:05: In what is a brief prelude to what’s about to come — but, in its inability to complete the thought that we think we’re staying so strongly on topic for — we talk about one of our reasons for loving the volume so much: that the book, at least in its 2000 AD chapters, feels like one coherent story, starting from an event that massively re-energizes the strip. And that event is…

0:10:06-0:54:20: …the storyline “Total War,” which is a mega-epic unlike anything we’ve seen in Dredd before, in large part because it treats the apocalyptic events as something truly traumatizing and not easily recovered from. Is this because it’s the first widescale “Mega-City One gets fucked” story created since 9/11, we wonder, and think about what 9/11’s aftermath felt like when this story was published in 2004. We also talk about the ways in which this storyline feels like a practice run for “Day of Chaos,” a storyline that would be published some years later — laying some foreshadowing of our own — as well as John Wagner being a “both sides” writer, and the wonder that is Henry Flint, whose work in this arc is genuinely staggering. (We spend more time than usual talking about a particular sequence, and what Flint and colorist Chris Blythe achieve here, but it’s entirely deserved.) At some point, one of us describes this arc as a masterclass in comics, and I’m standing by that as I type these words. 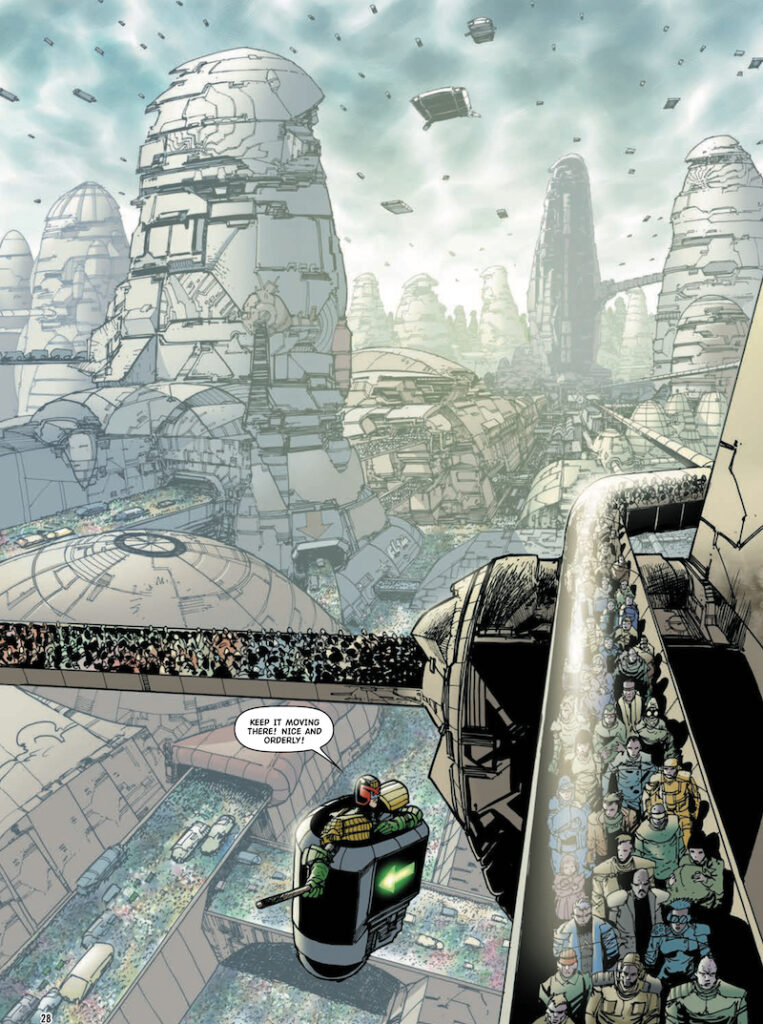 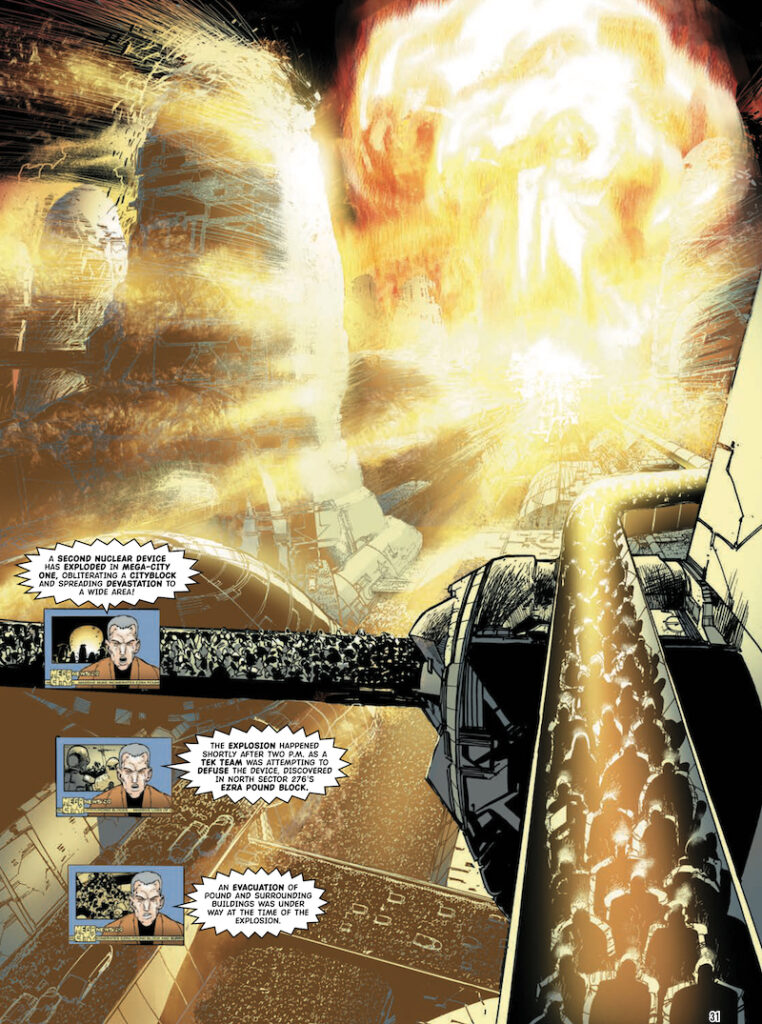 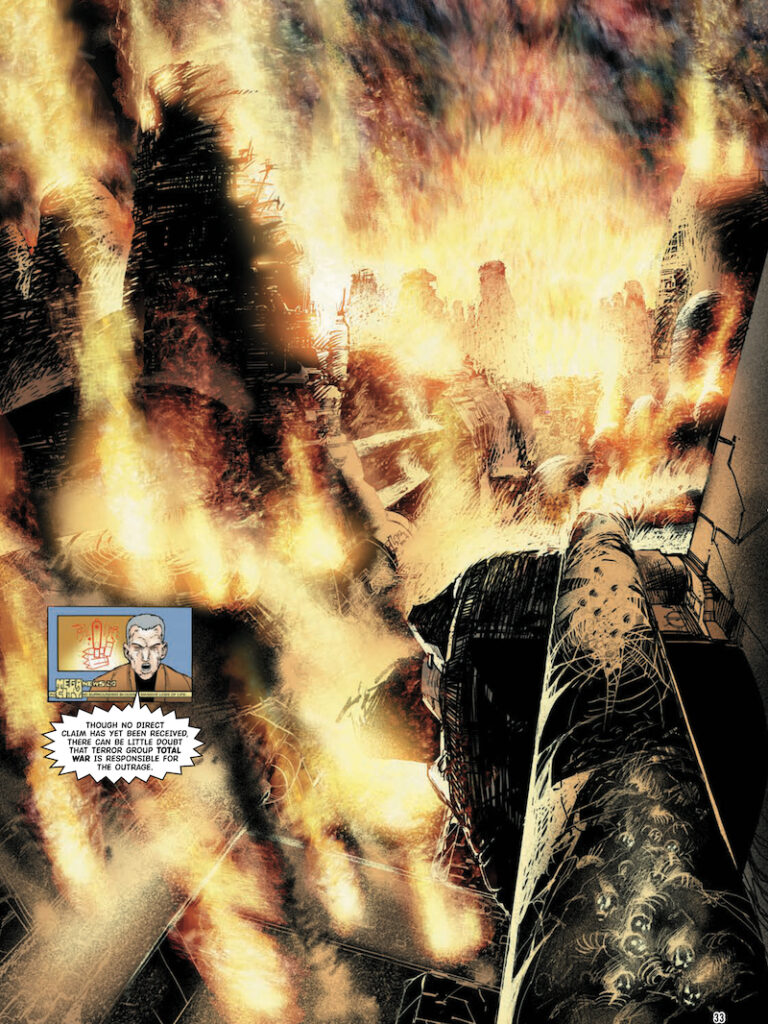 0:54:21-1:17:48: We’re not done with “Total War” yet, because we dig into the B-plot, which worked for me more than it worked for Jeff, who was arguably objectively right on this particular topic. I also love the very last page of the story, which leads Jeff into one final(?) classic “Jeff is perhaps reading too much into what’s on the page” moment of the run, but at the same time, I suspect that he’s spot on when it comes to some of the subtext, so… that’s a win…? 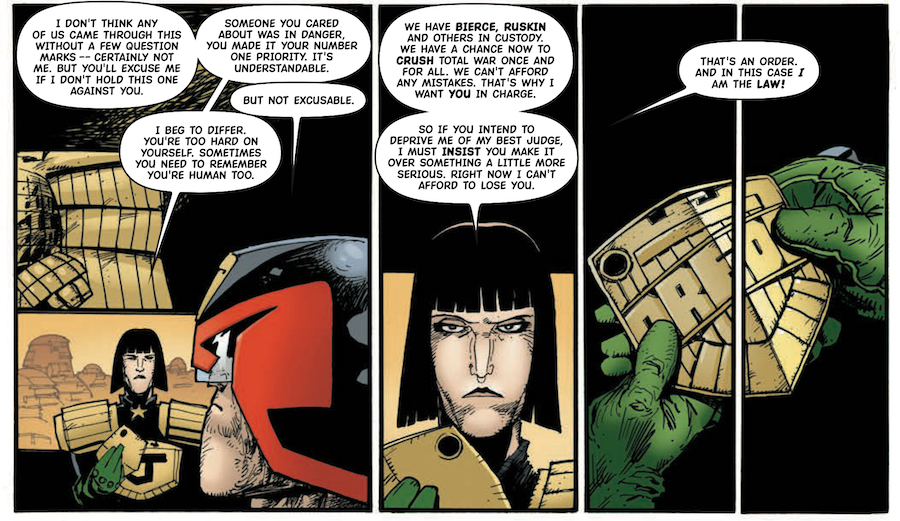 1:17:49-1:35:40: Having spent more than an hour on ~70 pages of a 200+ page book, we start speeding through the rest of it, in an attempt to keep the episode to a reasonable length. As a result, we rush through the following topics when discussing the remainder of the 2000 AD episodes in the book: Is Jason Brashill’s art too cartoonish for the subject matter of a grim John Wagner arc? Why is Gordon Rennie returning to the pairing of Vienna and Rico? How fucking great is D’Israeli? (Very; he’s very fucking great.) Is Ian Gibson too cartoonish for the subject matter of a downbeat Gordon Rennie arc? Also, why do neither of us really care or even remember that much about Judge Karyn, who’s obviously meant to be a major player in the arc she appears in? (Also also: Boo Cook’s colors are amazing.) It’s pretty all over the place for 18 minutes, really. 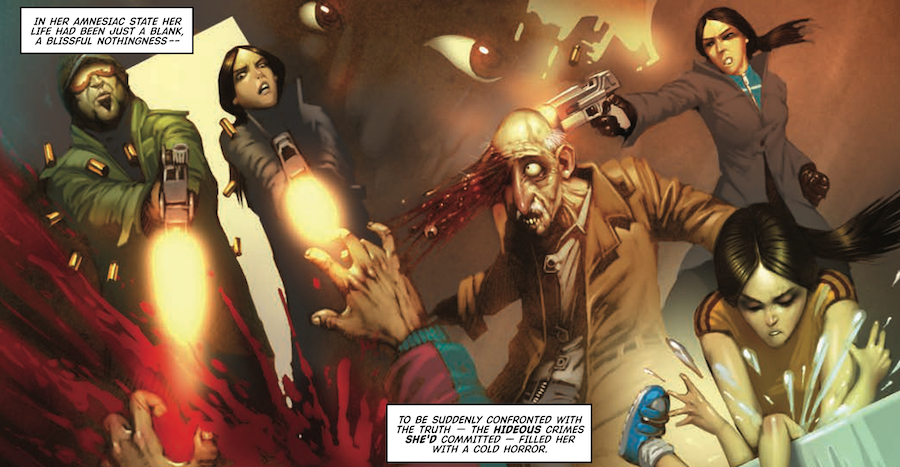 1:35:41-1:52:33: And yet, somehow, it sounds coherent and considered next to our rush through the Megazine episodes of the book, which include a John Smith-written Devlin Waugh cameo — which nonetheless has nice art from John Burns — as well as the strongest Alan Grant story we’ve seen in this series in recent memory, a Gordon Rennie one-off with Simon Coleby called “Meat Patrol” that is up there with Wagner’s work, and Jeff’s favorite thing in the world: John Wagner writing sportscasters. (That said, the story in which those sportscasters appear also got him thinking about Chloe’s piece about underground comix from The Gutter Review, so there’s more here than just Jeff loving the banter.)

1:52:34-1:57:41: Oddly enough, we’ve spoiled our traditional format by announcing that this volume was Drokk and not Dross all the way at the start of the episode, and it’s also pretty clear what our favorite stories in the volume are, as well, so clearly we should once again return to our shared love of Henry Flint by talking about his placement in the Dredd artist pantheon. (I suspect this is going to get some people thinking we were too generous, but you know what? We really weren’t.)

1:57:42-2:01:02: We’re caught up with the Complete Case Files, so what are we going to do for our (shiver) final Drokk!? How about the afore-mentioned Day of Chaos, which fucks MC1 up to a degree previously unseen in Dredd, and lets Wagner go for the slow, horrific dread (no pun intended) for almost a year’s worth of stories. I tease what to expect here. 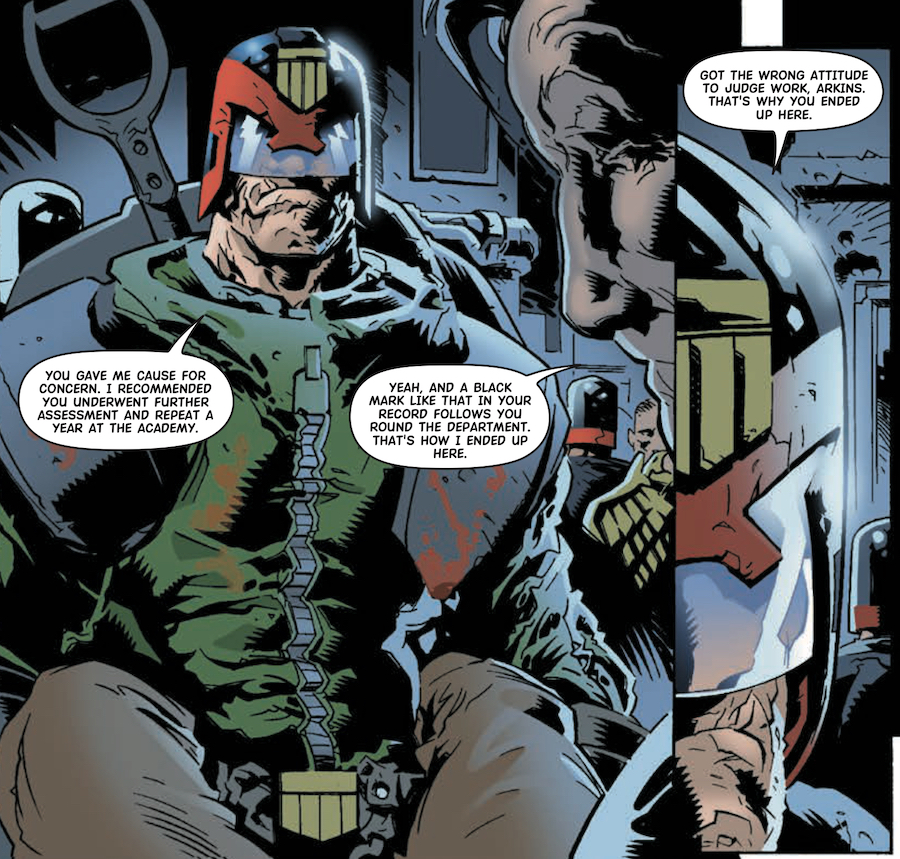 2:01:03-end: And then, it’s almost all over, bar the regular wrapping up of Twitter linkage and Jeff telling everyone about Patreon — oh, and us going over the fact that we’re ending the podcast at the end of the year, as well. Go leave us messages and questions for next week’s Wait, What? Q&A episode either via email (waitwhatpodcast at gmail etc.) or @WaitWhatPodcast on Twitter before it implodes, and come back next week for the near-end of Mega-City One, and the definite end of Drokk! As always, thanks for listening and reading along.