Previously on Drokk!: Considering this is the final episode in the series, what’s come before can be pretty fairly summed up by the word “everything.” Most important, though, is remembering that, way back when, Judge Dredd ended the Apocalypse War by deciding to blow up the Soviet city East-Meg One… 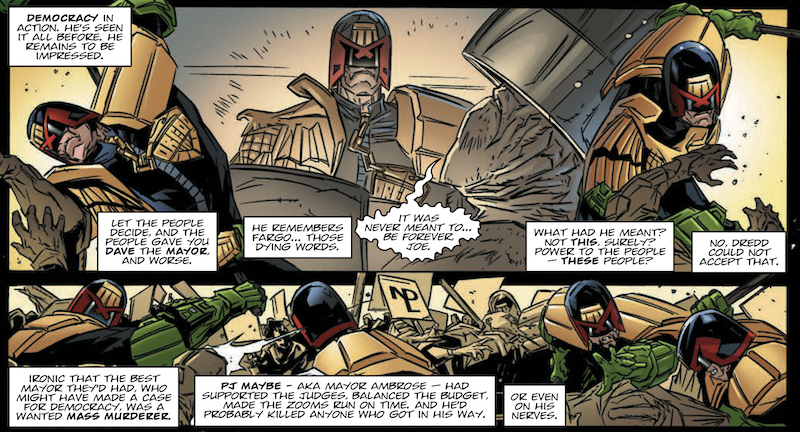 0:08:31-0:18:19: We’ve jumped six years between the last Complete Case Files volume and this one, and I go over some of the story that covers, primarily the “Origins” storyline — which, as the name suggests, talks about the beginnings of the Judge program, as well as reintroduces Judge Fargo to proceedings temporarily — and the idea that PJ Maybe has not only returned to MC-1 but temporarily served as the best mayor the city has ever seen in the interim, as well. How has Dredd (the strip and the character) changed in those six years? Jeff has some thoughts.

0:18:20-0:23:59: Technically, the short arc that starts the first of the two Day of Chaos collected editions isn’t part of Day of Chaos proper, but as we discuss, it certainly sets the tone for what’s to follow: the sense of tension and impending doom, as well as the idea that everything has gotten far more fragile and dangerous in the interim, as well…

0:24:00-0:39:52: For a series of comics created between 10 and 12 years ago, Day of Chaos feels scarily prescient about the world we’re living in today, which we discuss in some depth. It’s not just the panic and paranoia of an illness that decimates the city, although in these COVID times, that’s certainly an element — there’s a more than healthy distrust and disbelief in the authorities and anything the police have to say on display here, with surprisingly tragic consequences for those involved. We talk about the power of the omniscient narrator, the fact that everyone in the story was acting in good faith in their own way, and the way in which the storyline swaps out traditional narrative structures for something relentlessly bleak that is, perhaps because of that unrelenting nature, just shockingly powerful. Jeff also talks briefly about the shooting of Alex Nieto in San Francisco in 2014, and his own connection to those events. 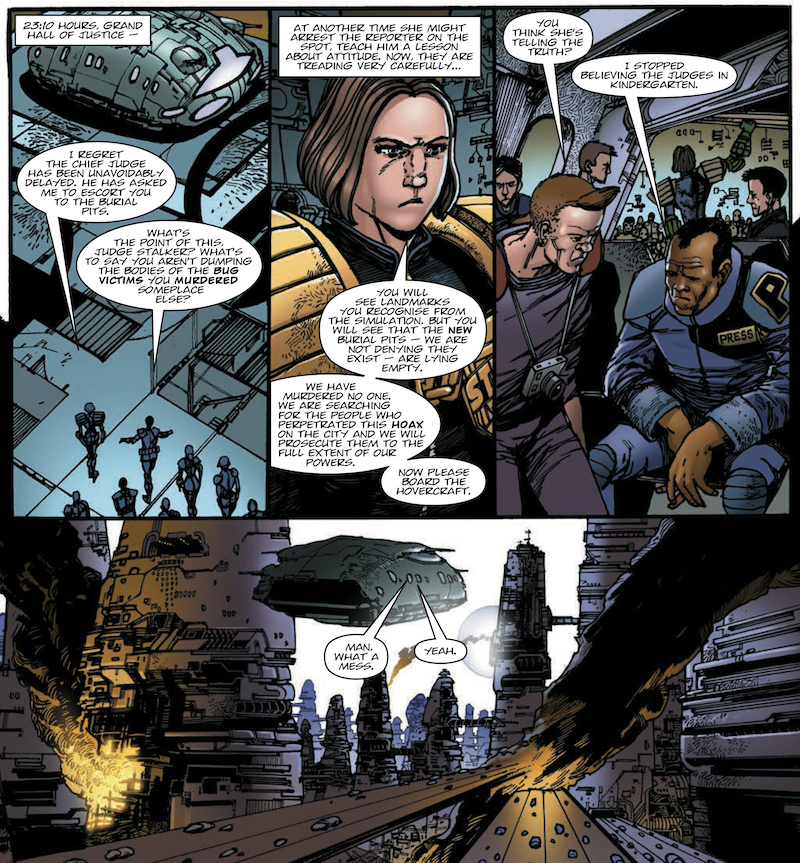 0:39:53-0:42:57: Very very briefly, Jeff and I talk about whether or not Day of Chaos was at some point intended to be John Wagner’s farewell to Dredd — and whether it still stands as his final statement on the strip, even though he continues to contribute in small ways. 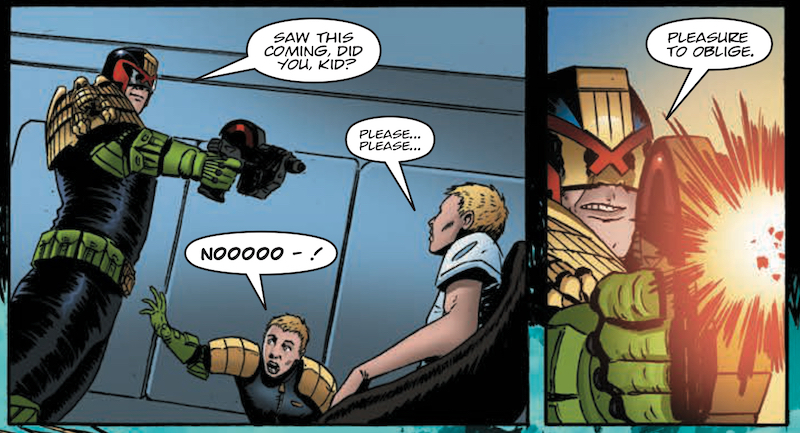 0:42:58-1:10:44: Finally, I summarize what Day of Chaos is about as quickly as I can, and Jeff corrects me, cementing our traditional dynamic for the ages. He also, importantly, suggests that this isn’t an adventure story or mega-epic in the traditional Dredd sense, but instead a contemporary take on a Greek Tragedy in which the inevitability of disaster is pretty much the point. Or, as he puts it, “instead of the tension of ‘Will they or won’t they,’ there’s a sustained feeling of, it’s time to pay the piper.” We also talk about the small comedic elements of this storyline, and whether or not they work for us. (Me, yes, Jeff, less so.) 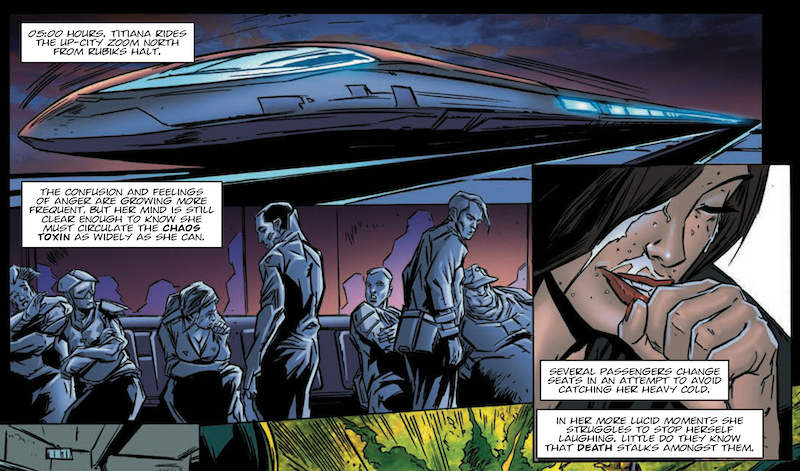 1:10:45-1:34:36: Aside from Jeff repeatedly calling the Apocalypse War “the Armageddon War” — I didn’t want to break his flow to correct him! — we talk about the horror of this story as a corrective to fan apathy with the traditional shape of the mega-epic storylines, as well as just how brutal the story’s epilogue ends up being, by leaving Dredd in his moment of despair. Does this story manage to humanize Dredd in its sparseness? Also, Henry Flint is amazing, this storyline understands horror and trauma in a way that many fictions about such topics fail to, and Jeff manages to explain just why Day of Chaos hits as hard as it does: in doing so much damage to Mega-City One, it’s essentially killing off the second lead of the strip after so long. 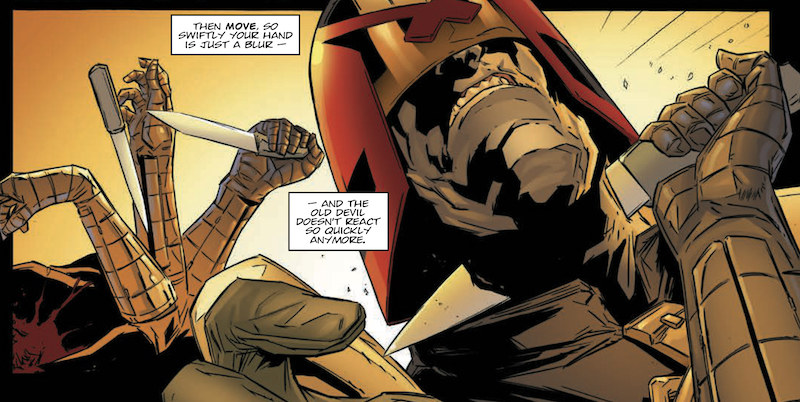 1:34:37-1:48:48: Day of Chaos is an impressively nihilistic storyline in a strip that isn’t traditionally so dark — and I look forward to what followed to illustrate that the series arguably healed to some extent after this arc — but, in its nihilism, does John Wagner finally answer the question of whether or not Dredd is a hero or a villain? Jeff has a theory that suggests yes. What if this storyline in particular is Wagner finally wrestling with the question of whether cops can ever actually be heroes at all? 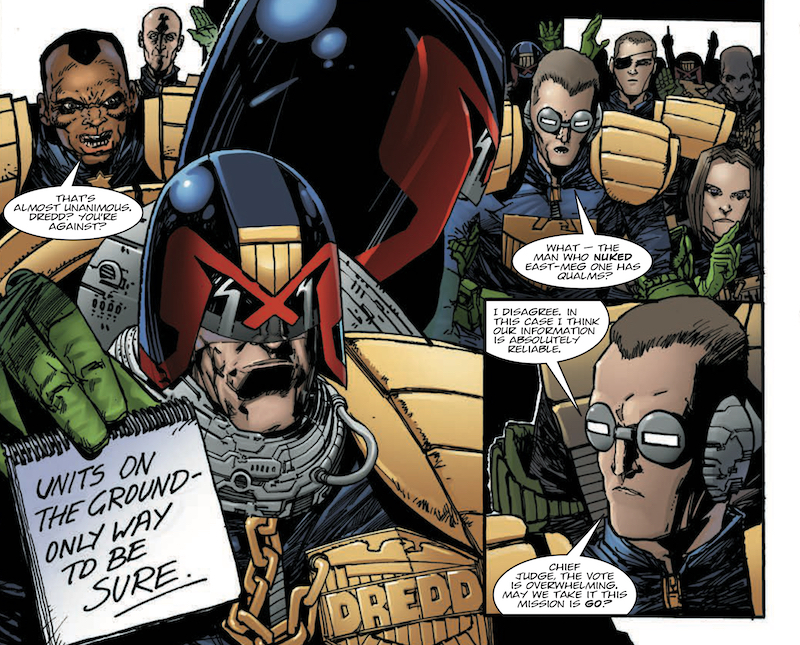 1:48:49-2:22:25: After running through the artists we like and like slightly less in this storyline — short version: we continue to love Henry Flint and Colin MacNeil — we declare this storyline Drokk instead of Dross and move onto the important question: after reading so much Dredd in a relatively short period, would Jeff call himself a Judge Dredd fan at this point? Jeff answers in a very Jeff way, and then pivots to something arguably far more important: the fact that John Wagner is a very underrated writer, and Judge Dredd is a very underrated comic book property outside of the UK. Can that be changed, and if so, how? Also under discussion: what has doing Drokk! taught me over the past four years? And how does Jeff really feel about Batman villain Ra’s Al Ghul? 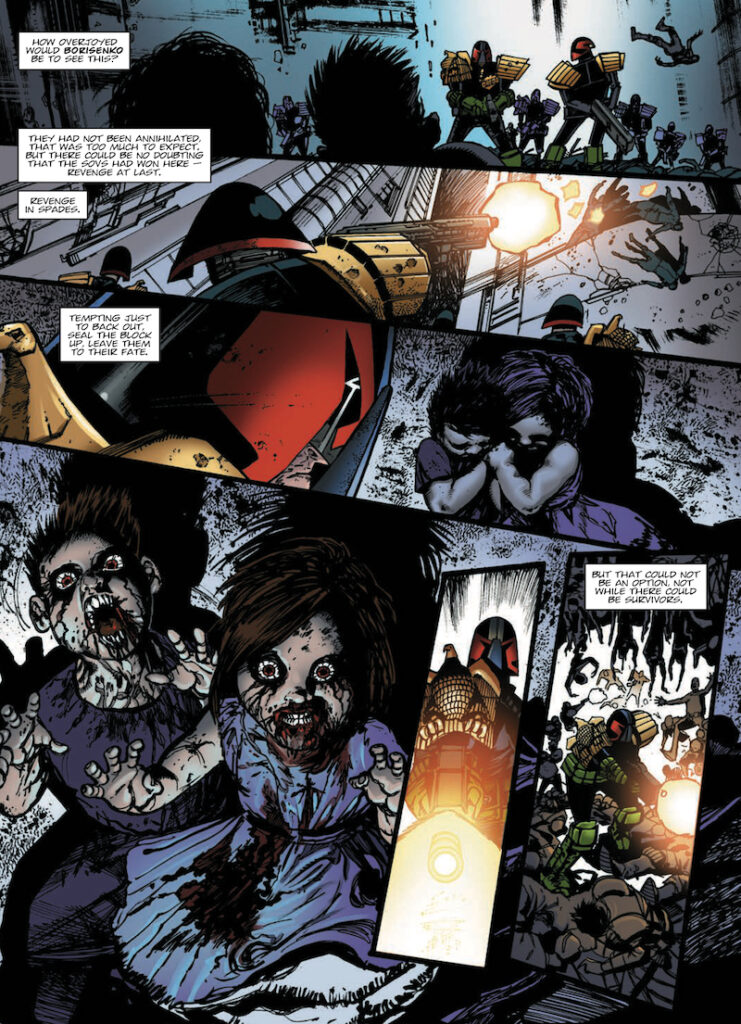 2:22:26-2:30:13: One last piece of business before we wrap it all up for good, as I answer a question asked by Matthew Murray on Twitter specifically for the end of Drokk: do I think that 2000 AD and those in charge of it — which is to say, Tharg the Mighty — will ever let either Judges Dredd or Anderson die, or will they be kept in action in perpetuity?

2:30:14-end: And that’s it! We wrap things up in our dazed fashion, which is just what I’m doing here with these show notes, too. Thank you sincerely for everyone who’s listened along to this over the past four years, and especially those who’ve left comments on these posts: you’ve almost without fail been smarter and more on topic that Jeff and I, and we’ve appreciated everything you’ve brought to the table. It’s been a genuine honor and joy to do Drokk!; I hope it was even half as much fun for you lot to listen to. Thank you, all.