You are viewing all posts published for the month of October, 2015. If you still can't find what you are looking for, try searching using the form at the right upper corner of the page.

Okay, so it’s unlikely that, between Halloween, the end of Daylight Savings Time, and all the usual stuff that goes into the weekend that this post will truly help you BUT JUST IN CASE let…

I don’t generally think of these reviews from a commercial perspective. I don’t think of these posts as buying advice, for the most part, especially since most of my reviews wind up boiling down to “Yeah,…

Programming Note: If you haven’t already heard this week’s episode, scroll down past this entry and find it. And then, on the 29th, tune in to the new episode of Fan Bros to hear me… 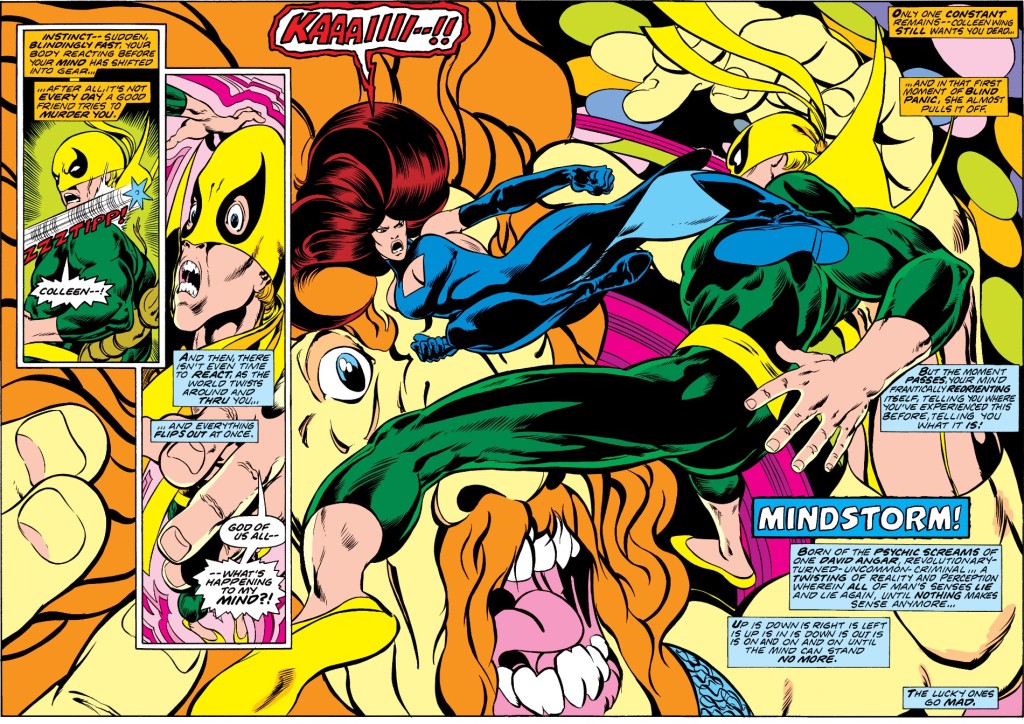 Early trick? Infrequent Treat?  Either way, Wait, What? Ep. 187 is at your doorstep, dressed up this year as “Sexy All Things Considered”!  This episode is two and a half hours of Graeme and Jeff sonically toilet-papering comics’ house, and you’re invited to hide in the bushes and snicker with us!

(For those of you reading this who don’t have Halloween in your location, I hope that paragraph was more charmingly surreal than vexingly impenetrable.)

Anyway, let’s get on with those show notes, shall we?  This year, they’re dressed up as  “Sexy Medical Consultation Notes”! 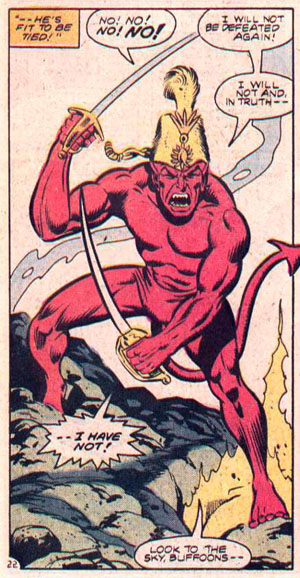 00:00-13:47:  Greetings from Jeff “I Am The Devil!” Lester and Graeme “Yes, He Is The Devil” McMillan, who are off and running almost immediately thanks to some pressing comic book questions, like: was the Son of Satan actually, y’know, the son of Satan?  Discussed: J.M. DeMatteis, The Defenders, Buddha and Anti-Buddha, The Twentieth Century Satans, the David Bowie with the least amount of Bowie Flavor, the world’s meekest defense of Elvis Costello, Marvel’s recent BOGO sale, Iron Fist, Power Man, and Power Man & Iron Fist, and more.  “Patient’s autonomous reflexes are responsive…especially the sexy reflexes!” 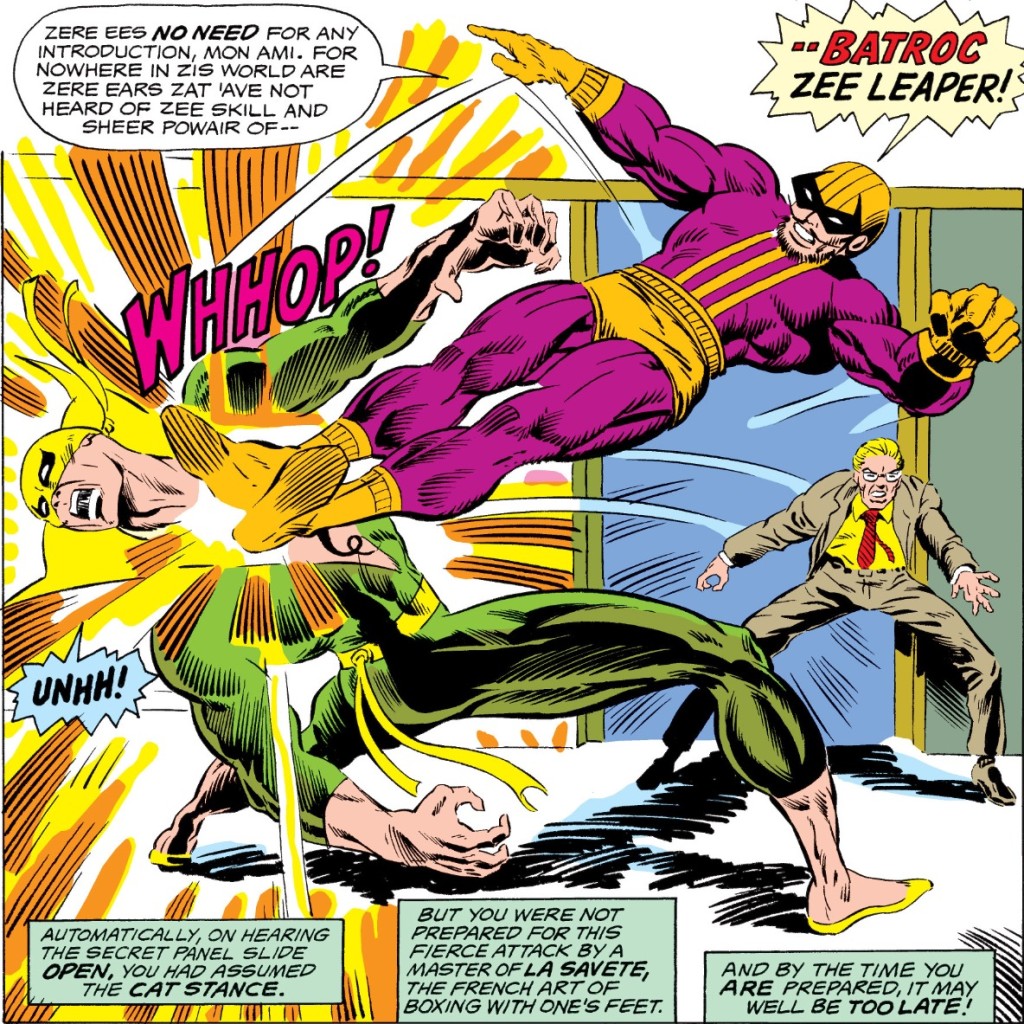 13:47-34:59: But still tho: Iron Fist.  Jeff has been re-reading from Iron Fist’s debut in Marvel Premiere #15 and so as you can imagine we discuss: Iron Fist, the Marvel premiere of Iron Fist (in Marvel Premiere), the career of Pat Broderick, the episode when Jeff suffers a stroke on-air, the penciling debut of Larry Hama and some of the visuals that get carried over to G.I. Joe, Tony Isabella as Gerhard Schnobble, Batroc The Leaper, the origin of Ghost Rider, Seeker 3000, Crystar’s comrade in arms Beau Bridges, Mag-NEET-oh vs. Mag-NET-Oh, the origin of The Champions, Jimmy Woo founding member of the Defenders, and etc. “Patient’s seems dazed and only partially responsive to questioning…unless the questions are sexy and provocative!” 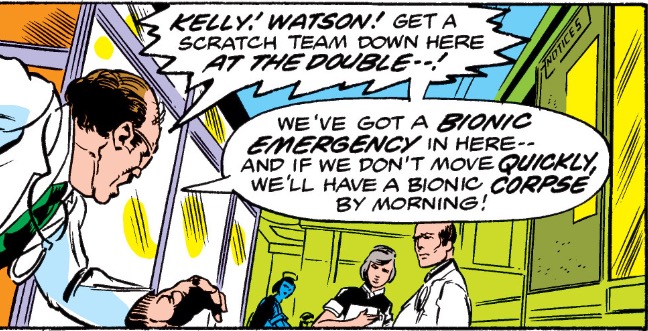 34:59-1:02:43: But of course a big deal about early Iron Fist stories is it’s where a certain Chris Claremont gets his first ongoing series (and with John Byrne, his first regular collaborator) and just like with Hama, it’s pretty damn interesting to see how much of Claremont’s interests, obsessions, and tropes are here in nascent form and how much of them are just…there, right from the get-go.  Discussed:  softball, creator cameos, mind control, the success of Spider-Man eyes, Bill Everett and Amazing Man, Batroc The Leaper as Pepé Le Pew, Chris Claremont’s scripts, what made the X-Men sell and sell and sell, Claremont and his desire to create tiny little stories about people, how everyone in the cast powers up and the bionic arm reveal in Iron Fist #3, Neil Conan NPR Reporter and Moira McTaggert, Peter Corbeau, more about Jo Duffy on Power Man and Iron Fist, Kerry Gammill, Trevor Von Eeden, Bob MacLeod on New Mutants vs. Bill Sienkiewicz on New Mutants, and much more in that vein.  “Veins and pulse rate are shallow…except for the sexier veins. MROWR!” 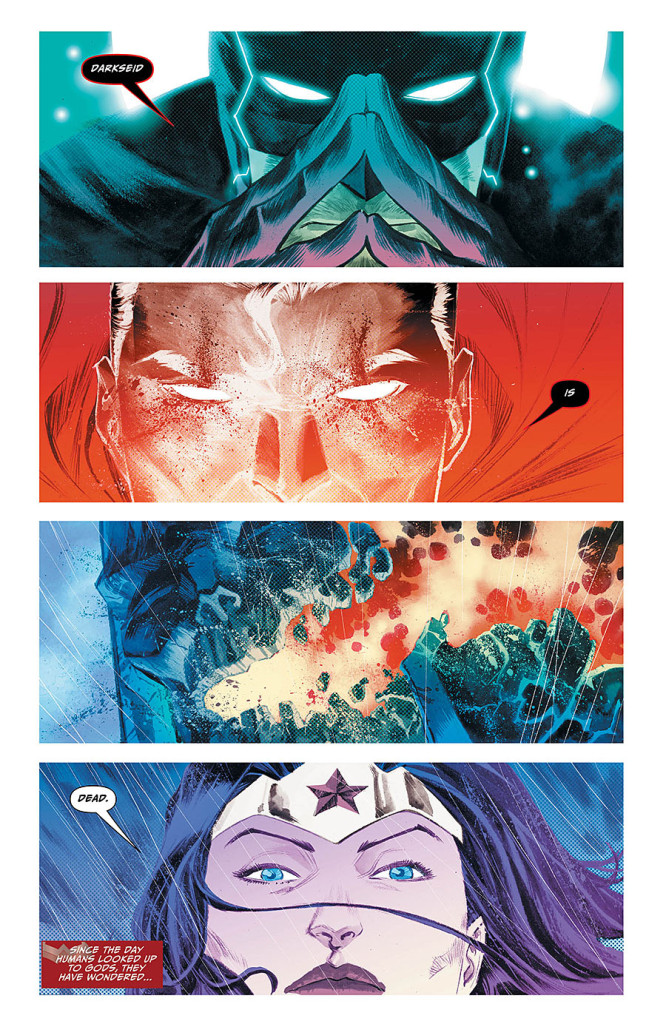 1:02:43-1:17:16: “I want to spin us around entirely differently,” Graeme announces, “and say did you got to the store this week?” Jeff hasn’t, and technically neither has Graeme but thanks to the miracle of digital downloads and comp copies, he’s here to talk about one of his favorite books of the week, Justice League #45 by Geoff Johns, Francis Manipul and Brian Buccellato.  “You have this absolutely ridiculous plot and this astounding art, and I just finished it being like ‘why can’t Justice League *always* like this?  This is amazing!’” SPOILERS for this arc, The Darkseid War, and also SPOILERS for Brian Hitch’s opening arc on Justice League which Graeme is also enjoying.  Also discussed: Geoff Johns tropes, The Amazo Virus, old rumors from the time of Final Crisis, Jeff Lemire and Justice League Dark, Jeff Parker and Justice League United, “Even Cowgirls Get The Plants,” and more.  “Conjunctivae pink. Sclerae anicteric. Oropharynx clear…and hotter than a barbecue pit in July!” 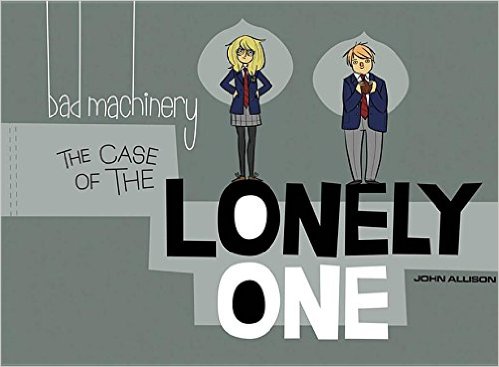 1:17:16-1:22:14: “You know what I’ve been enjoying more than anything?” Graeme asks, but thank goodness it’s a rhetorical question because Jeff doesn’t know. “Bad Machinery.”  Discussed: yup, you guessed it: Bad Machinery by John Allison, a comic that Graeme says is “perfectly tuned to my sense of humor and my sense of the ridiculous,” the template for Bad Machinery cases, and SPOILERS for the upcoming volume from Oni, The Case of the Lonely One (and what Jeff does not say but should have is that Graeme would probably like him some Daniel Pinkwater). ” No cyanosis, clubbing or edema…except for *erotic* edema!”

1:22:14-1:28:03:  As becomes clear from the conversation that follows, Graeme has not read Jeff’s review of The Colonel of Two Worlds,( and Jeff is okay with that!) but he has read the comic itself, so the duo are able to discuss that very fun and strange freebie comic. Discussed: the importance of unjustified ridiculousness,  the new sincerity and the new irony.” This area was mildly indurated. There was absolutely no erythema or fluctuance and it was not tender at all. No drainage…except for the *love* drainage!” 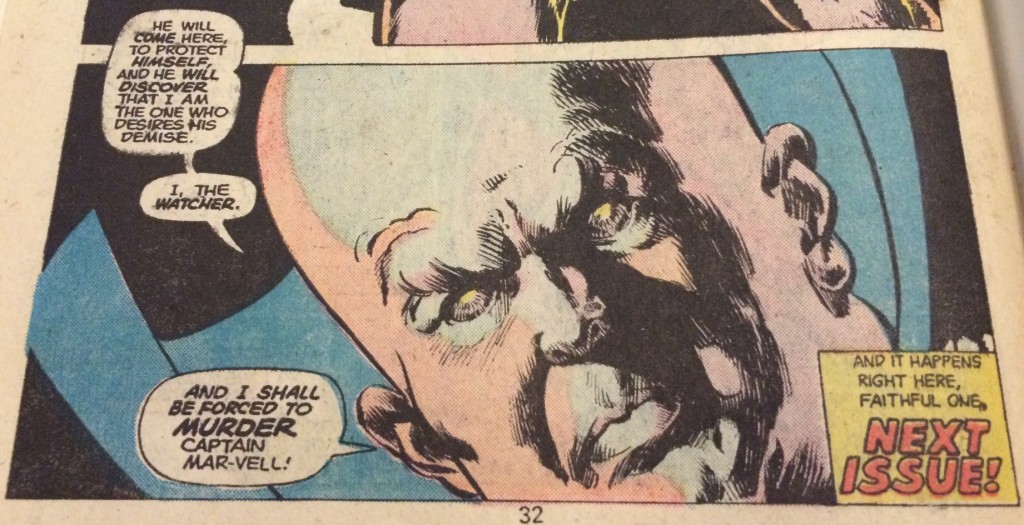 1:28:03-1:49:12: Although he did not get to the store, Jeff did read a lot of comics and he wanted to talk about Captain Marvel #35-46, more or less by Steve Englehart and Al Milgrom.  This period falls right after the stunning run by Jim Starlin and, being buds and partying pals of Starlin, Englehart and Milgrom have big shoes to fill but also a semi-sympatico sensibility (and with that I’ll just collect my Alliteration Award at the window and be on my way, thank you very much)…or do they?  Discussed:  The Lunatic Legion, dropping acid in the Negative Zone, The Trial of the Watcher, the Skrull version of the MacArthur Genius Grant, the secret origin of Captain Marvel, space mules, how the storyline should’ve ended, Field of Dreams, and more. ALSO ALSO: If you want to read a little bit more about how less than spotless this run is, Jeff uses the letters pages as an example here.  “1+ posterior tibialis bilaterally. Feet are warm and capillary refill a bit slow but still less than 2 seconds. Decreased hair…which suggests sexy waxing! (Or hair loss.)”
1:49:12-2:00:51: Really, we should be just about done, right?  Well, no, not quite:  Jeff, knowing how much Graeme has had to write about Star Wars recently, asks Graeme about…Star Wars!  And yet, Graeme doesn’t quite take the bait and pivots instead to discuss…Back To The Future Day! Also discussed: the impeccable craft of the first Back To The Future movie; Jeff’s suspicions about Back To The Future and Forrest Gump, Graeme’s criticism of how Back To The Future 2 steals the thunder of Back To The Future 3; Graeme’s criticism of Jeff’s theory, especially in light of the villain of Back To The Future 2 being deliberately modeled on Donald Trump, FULL SPOILERS for Back To The Future 2, shooting sequels back to back and whether that can work with movies that aren’t books, and more.  “Heart is Regular rate and rhythm without murmur, rub or gallop except for intermittent pangs…OF SEXY LOVE.”
2:00:51-2:27:48: “I like how we were actually ‘let’s talk about Star Wars’ and we totally didn’t,” sez Graeme, and so we finally do.  Discussed: The release schedule for Star Wars movies, Greg Rucka’s Journey To Star Wars—The Force Awakens miniseries (and Graeme’s review), whether the new movie would be more satisfying the less you know about it, J.J. Abrams *KEEPER OF MYSTERIES*, Star Trek Into Darkness and Graeme’s rewatch and Jeff’s refusal to believe anything Graeme says now, rewatching Man of Steel vs. rewatching Green Lantern, rewatching Avengers vs. rewatching Avengers Age of Ultron, the good moment from The Phantom Menace, why Jeff likes John Cassaday on Star Wars and why Graeme likes Stuart Immonen on Star Wars, and more.  “Possible abnormal chest xray. Will repeat today….over a romantic candlelight dinner in the nude!”
2:27:48-close: Closing comments!   Our special thanks to the kind crew at American Ninth Art Studios for their continuing support of this podcast..as well as our special thanks to the Empress Audrey, Queen of the Galaxy…and to all 112 of our supporters on Patreon who make all this possible.  Stitcher! Itunes! Twitter together and separately: Graeme and Jeff! Matt! Tumblr!
NEXT WEEK: Another skip week since there were five Thursdays this month and the very last Thursday is right before Jeff’s birthday so…yes, no podcast next week and blame Jeff for that.
HOWEVER, did you read all of the roundtable between Graeme, Matt, and I about the first issues of Paper Girls, Survivors’ Club, Batman & Robin Eternal, and Doctor Strange?  It’s like a podcast for the eyes! It’s worth a read! We had a lot of fun doing it and will probably want to do more! 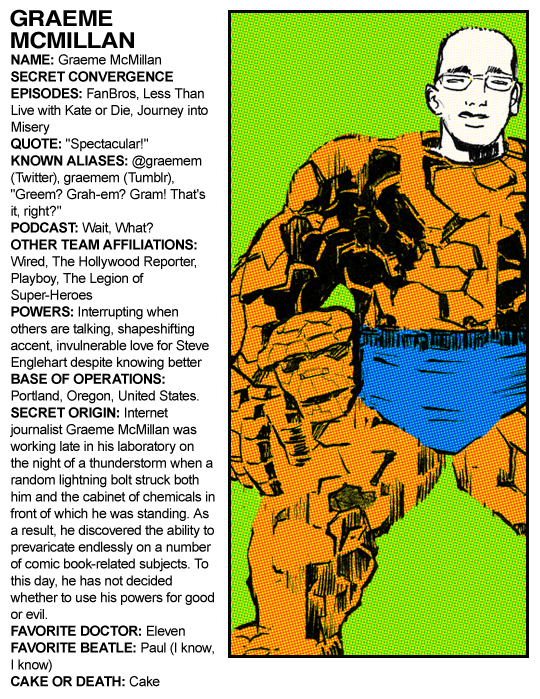 ALSO, on Friday, Graeme and Jeff are special guest-stars on the only movie podcast in the universe, Travis Bickle on the Riviera!  We are on part two of the massive Spookstravaganza where Sean Witzke, Travis Stone, and an unstoppable super-team of cinematic smartypants look at the film of Ridley Scott versus the films of Tony Scott!  Go check out Part 1 so you can be prepared for the sonic chair match that is Graeme vs. Jeff vs. Sean vs. Tony Scott’s Domino!!!

It looks like the auto-embedding of the player is back so look to our first comment if you need a link for cutting and pasting needs.  And as always, thank you for listening!

It’s almost Halloween and I am currently very much enjoying the fruits of my labors…although you have to understand I’m using the term “labors” in the 21st Century First World definition, which is to say “purchases.”…

You might think that taking part in an 800,000 word roundtable conversation that started with discussion of Batman & Robin Eternal #1 would’ve exhausted everything I had to say about that particular lightweight action-adventure superhero romp….

Perhaps it’s because I have written more words than any human being should, over the last few days, about Star Wars, but I keep finding myself surprisingly blocked when it comes to expressing how I…

KFC: THE COLONEL OF TWO WORLDS:  As a kid, back when comic books were more out of reach than they are now, I remember being delighted whenever a free comic came my way.  For a…

PREVIOUSLY, ON THE WAIT, WHAT? ROUNDTABLE. We have exhausted about a trillion words in a look at four recent first issues: Batman & Robin Eternal #1 (DC), written by Scott Snyder and James Tynion IV with…

PREVIOUSLY, ON THE WAIT, WHAT? ROUNDTABLE. We started a look at four first issues: Batman & Robin Eternal #1 (DC), written by Scott Snyder and James Tynion IV with art from Tony Daniel; Survivors’ Club…