First and foremost: how great is Graeme’s takedown of MPH?  Reading that the other day was like having a triple shot of espresso.

As for me, I keep wanting to write capsule reviews—if I do ‘em right, they’re lively, fast-moving, and funny, plus it’s a little bit easier to ignore my shortcomings (“Oh, the art? Huh, yeah, I guess the art is okay”) —and I think I finally found my hook. What if I reviewed the books from Comixology’s recent Summer Reading List giveaway? Maybe broken out over two or three entries?

That might be okay, right? If I don’t give myself too much rope and end up writing eleven million words, thereby defeating the purpose, right?

Detective Comics #871: Huh. So DC gets the starting position of a twenty day giveaway and comes out of the gate with issue #871 of its previous run of Detective Comics, the one featuring a non-Bruce Wayne Batman? Way to welcome new viewers, DC! Maybe they were worried about pissing off direct market retailers, but doesn’t it seem like it would’ve been smarter to put up Batman Eternal #1? It’s an issue that feels like a jumping-on point, it’s a 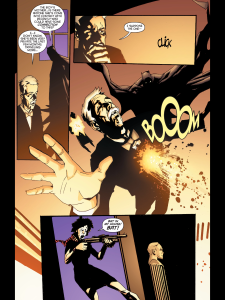 Here’s a confession: I never read this when it came out! By the time I heard good stuff about this run, it was a little too late to jump on—I actually ended up picking the arc a year or so ago when it was on sale digitally and then they’ve sat around unread ever since. (I love the clutter-free nature of digital comics but it’s too damn easy to stock up on stuff in a fit of spree purchasing and then have them sit out of sight, out of mind.) So reading it now, after Scott Snyder has become a thing? It’s fun to read him back when his tics were still quirks—the guy sure likes his spooky natural occurrences, family anecdotes, and drug names, doesn’t he?—but in my opinion the guy definitely traded up when he went from Jock to Greg Capullo. Here, Jock draws a nice cover but the rest of it looks like something Phil Hester would draw while walking down twenty flights of stairs: it makes Francesco Francavilla’s back-up (“Commissioner Gordon Looks Startled, Part One of Three”) seem like fucking Suspira by comparison. (But then, I’m pretty much in the tank for the way Francavilla pumps up his colors and his inks for that oversaturated feel.)

Despite my kvetching, a perfectly fine free comic in that “hey, I got to read a whole Batman comic for free!” kind of way.

Magnus Robot Fighter #1: Fred Van Lente and Cory Smith (with colors by Mauricio Wallace) modernize the Gold Key property so that anyone who can read it can be all, “Dude. The first Matrix movie came out fifteen years ago? Dude.”

Sorry, that’s me maybe giving away the big twist of the first issue, which finds our protagonist living in a mountain-side idyll, robots and humans side-by-side, until Magnus learns all—or at least some part—of that life was a delusion fostered by the only robot in a post-Singularity world capable of love.

We do get to see Magnus hi-yah some robots, which I’m okay with. (By all means, more hi-yahhing of the robots!) But after reading D4VE, it’s hard to take it as seriously as the book would like us to. Van Lente always has one or two super-clever bits in his scripts (I liked Magnus being found out as a human after he reads a Captcha) but…I kinda wonder what drives the guy, you know? Maybe he’s just a funny person who is good at writing funny stuff, but considering Van Lente has read more philosophy than I’ll ever pretend to know, I do wonder what’s really important to him. Because although this book was fine in an “I’d probably pay ninety-nine cents for another one” way, he doesn’t seem especially haunted by our post-Singularity apocalypse.

My Little Pony: Pony Tales Vol. 1: Oh, the hijinks that would ensue if I were to read all 150+ pages of this! But no, I made it through the first 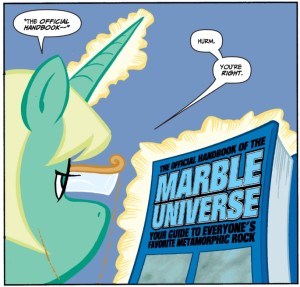 twenty-plus page Twilight Sparkle’s story (written and illustrated by Thomas Zahler), and a few pages of the Rainbow Dash’s story and packed it in.

But honestly, I didn’t pick this up out of a sense of sheer completism, I grabbed it so the next time my four year old niece was visiting and wanted a comic book to be read to her, I could break out something I know she already likes. We’d purchased the first issue of Friendship is Magic and, at the risk of being a heretic, I’d say I preferred what I read of this to what I read of that.

For one thing, Friendship is Magic #1 is a tough book for adults to slog through—the characters aren’t clearly identified so if you don’t know your Ponies and you’re reading it aloud, you’re really screwed. (I made do with a lot of pointing and occasionally asking my niece, “Uh, what’s this one’s name again?”) Also, the font size in Friendship is Magic #1 was bad enough her dad “accidentally” lost the comic after the third time my niece requested it read for bedtime: apparently, he chose lying to his daughter over murdering his own eyesight.

Thank goodness, this one has each pony in its own story with a big pin-up page at the beginning so you know who the hell you’re going to be talking about, and the font size seemed damn legible to me. At 150+ pages, it was a damn good deal for free: I’ll totally read it to my niece the next time she’s over, and maybe even pick up something at full price for her if she still has any interest in reading by the time she inherits her dad’s old iPad (which is pretty much her and her sister’s by now, anyway).

Be warned, though: if you don’t like horse-related puns and pastel colors, reading this will be like having your head shoved into cake frosting while someone punches you in the dick.

Lumberjanes #1: Blabbed about it back here. (or I would  if Boom! published My Little Pony, not IDW–thanks, Alin!). Well done there, Boom! (For stuff unrelated to IDW publishing My Little Pony.)  Although I wonder what my niece would think if I tried to read this to her—it feels a lot more slapdash than the first story in Pony Tales and I don’t know if there’d be enough of a hook here for her (although maybe “girls having adventures at camp” is more than enough of a hook?).

In some ways, Lumberjanes reads like a licensed comic to me: a lot of the impact comes from a relationship the reader has already developed with the characters elsewhere, except there’s not any other place for a reader to develop the relationship but here?

Werewolves of Montpellier: Remember that deleted sequence from Pulp Fiction where Mia Wallace grills Vincent Vega about whether he’s a Beatles person and an Elvis person? I wonder if there should be a similar Jason/Trondheim thing. Me, I’m a Trondheim guy as far as “anthropomorphized animals doing regular folks stuff” goes: Jason’s quiet—almost monotonous—style with its static panel sizes, silent panels, and understated expressions is fun, but I don’t know if I’ve ever read something of his where the story didn’t just deflate like a soufflé. I know that’s the kind of thing Europeans tend to find inherently funny—nothing can make a Westerner living in post-Empire conditions slap his knee like deadpan ennui—but for whatever reason it irks me in Jason’s work, where his twists on genre concepts seem more like attempts to wring juice out of said concepts in order to give his observational work a litle pep. 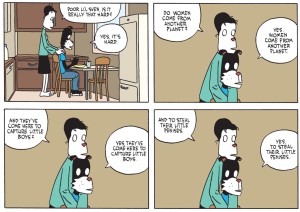 Take That, American Werewolf in London!

Here, for example, you’ve got a fifty page story about Sven, a recent émigré to France who robs (or at least breaks into) apartments while disguised as a werewolf, and ends up stirring the ire of a brotherhood of actual werewolves who think he’s caused too much negative attention. While that all shapes up, we see Sven read books, play chess, and fall in love with the woman across the hall who acts and dresses like Audrey Hepburn in Breakfast At Tiffany’s. The whole time I was reading Werewolves of Montpellier, I felt like I was watching a short film by Wes Anderson, one of those twelve minute affairs he uses to sell Italian fashion or Natalie Portman’s ass or something. In fact, despite Sven being an anthropomorphic dog (I think?), I could totally see Jason Schwartzman playing him. It’s cute, it’s peppy, and very “indie movie” in that way, that “charming for the first fifty-five minutes and annoying for the last thirty” way that some indie movies have.

To be fair to Jason (cartoonist, not the actor), there’s an excellent case to be made that even he is a little sick of his shit. Thematically, Werewolves of Montpellier is about the pitfalls of emulation and imitation—by the time you see the drawbacks to what you’re emulating, you’ve already become that thing, and it’s too late. But even with that factored in, I’m just not a big fan of anticlimax. Unless it’s done really, really, really well, I always end up thinking the creator got lazy.

Big ups to normally tight-fisted Fanta for releasing an entire graphic novella for free instead of just a hefty excerpt–and I really liked the first half or so–but for all of the above are the reasons it didn’t really kung-pao my chicken.

Archer & Armstrong #0: Fred Van Lente again, doing strong work (again) in the origin issue of Obadiah Archer, this time supported with artwork by Pere Perez, and colors by David Baron, which I found appealing in a “hyper-competent but bloodless” way (the art reminded me a bit of Dave Gibbons). In fact, that’s kind of the way I feel about fifteen or so issues I bought of this title before throwing in the towel. I’ve complained on the podcast before about not connecting with the Valiant books despite their laudable professionalism: I enjoy them while they’re being read but I put them down feeling restless.

Even here, for example, where we’ve got a kid kidnapped and brainwashed by the 1%, his life and memory stolen from him by a cult recruiting him to try and kill their immortal enemy, I never get much of a sense that Van Lente cares one way or the other. I mean, he knows what good is and what bad is, and he clearly supports the former over the latter.  But there’s none of the rabid dog fury that made a guy like Jim Starlin, for example, go out of his way to continually attack organized religions (in Warlock, Dreadstar, and Batman: The Cult, among others). Even if Van Lente does have something that really steams his clams, he’s not going to let something like that get in the way of keeping the story buttery-smooth.

As a free comic it’s perfectly cromulent, although as “zero” issues usually are when they don’t come out after a bunch of other issues, it’s less a strong introduction to Archer & Armstrong and more a decent pay-off to readers who’ve been following the book for a while. I wouldn’t kick it out of bed for eating crackers but, man, it kind of bums me out that the most influential comic book writer of the 90s is apparently Fabian Nicieza.