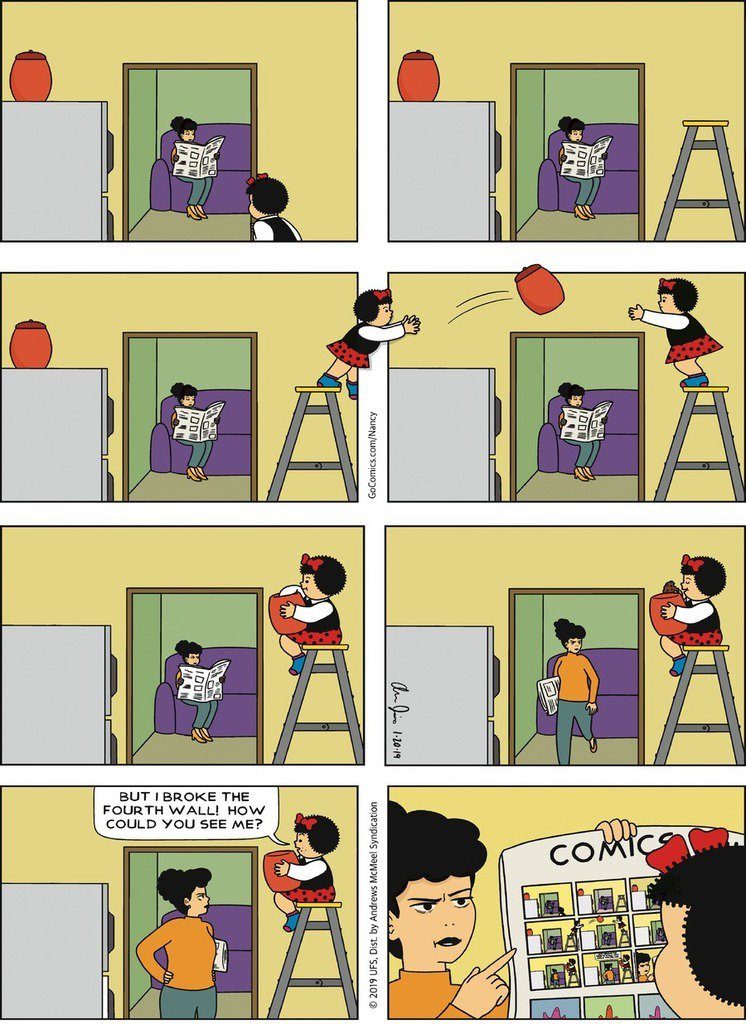 0:01-6:54:  Greetings from Graeme “Has A Cold” McMillan and Jeff “Has Gone Vegan” Lester, here to talk about the charms of Nyquil and Theraflu.  And if that wasn’t exciting enough: weather talk! Exciting!
6:54-14:05: Fortunately, we remembered we’re ostensibly doing a comic book podcast, so Jeff breaks out one of the few topics on his brain:  talking about vol. 1 of Mad Bull 34 by Kazuo Koike and Yoshinara Inoue.  When is a lowbrow manga too lowbrow for Jeff? And why?  Tune in and find out. 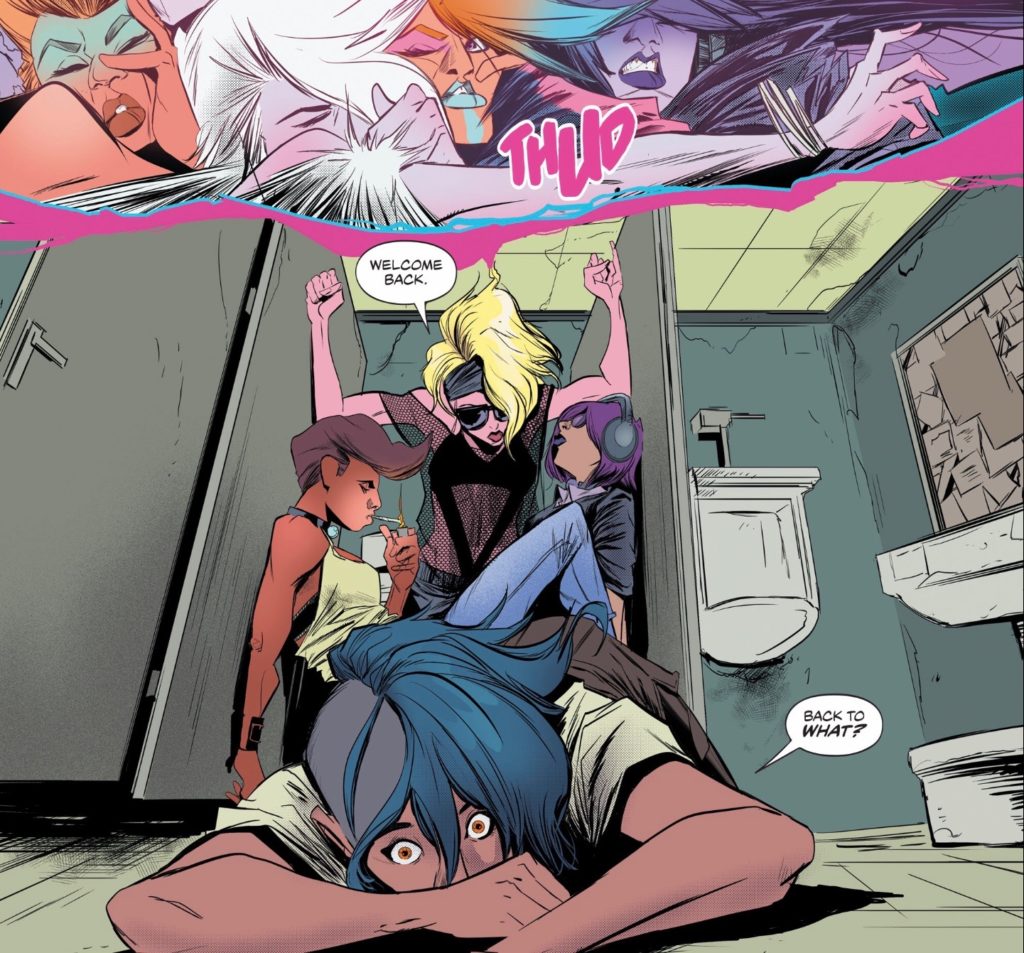 14:05-37:06: And from there, what seems like a digression is probably a more interesting topic for discussion: the absurd amounts comics and manga available digitally for a very low price.  Also discussed: Vinland Saga; Graeme’s Year of Reading More Manga; After Hours; My Boyfriend Is A Bear; Goddess Mode by Zoe Quinn, Robbi Rodriguez, and Rico Renzi; Action Comics #1000; and more. 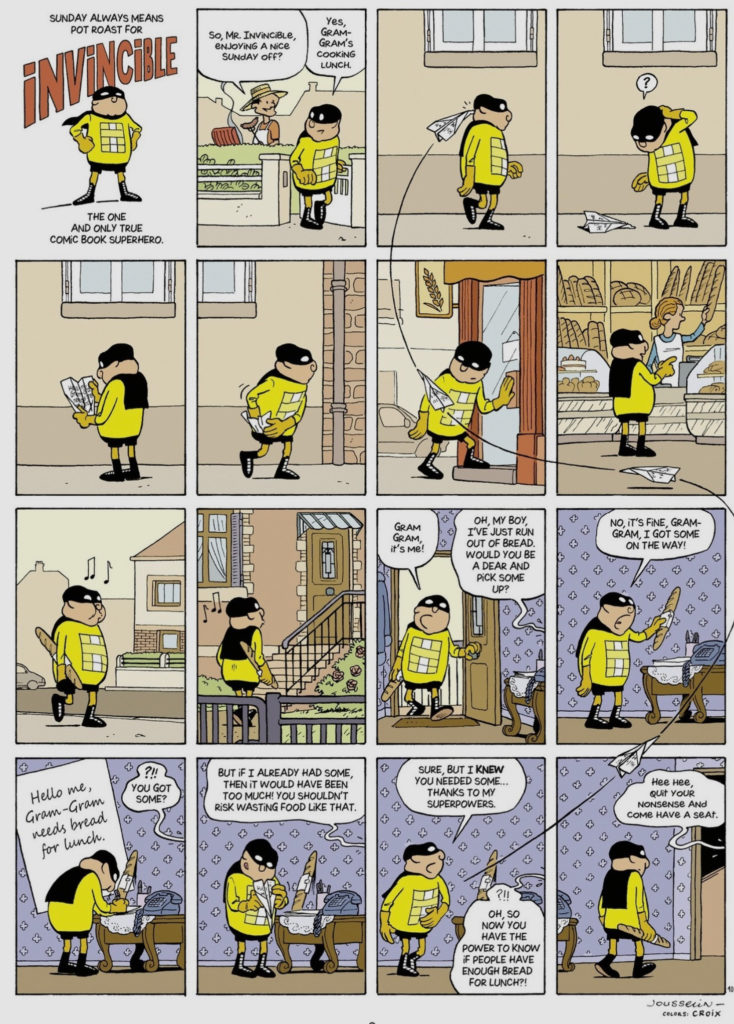 37:06-1:04:39: After talking about a bunch of stuff that didn’t really float his boat, Jeff grows audibly relieved to be talking about something he did read and like Invincible: Justice and Fresh Vegetables by Pascal Jousselin. (Huge thanks to kotgb for the recommendation.) Also discussed: Kirkman and Ottley’s Invincible; Hobo Mom; Die #2; Avengers #12; Master of Kung-Fu the omnibus vs. MOKF the digital collection; double page spreads; Barrier #1 and the Marvelscope annuals; and more.  (Oh, and George Perez announced his retirement the day we recorded so we spend a lot fo time trying to figure out why he’d already retired?) 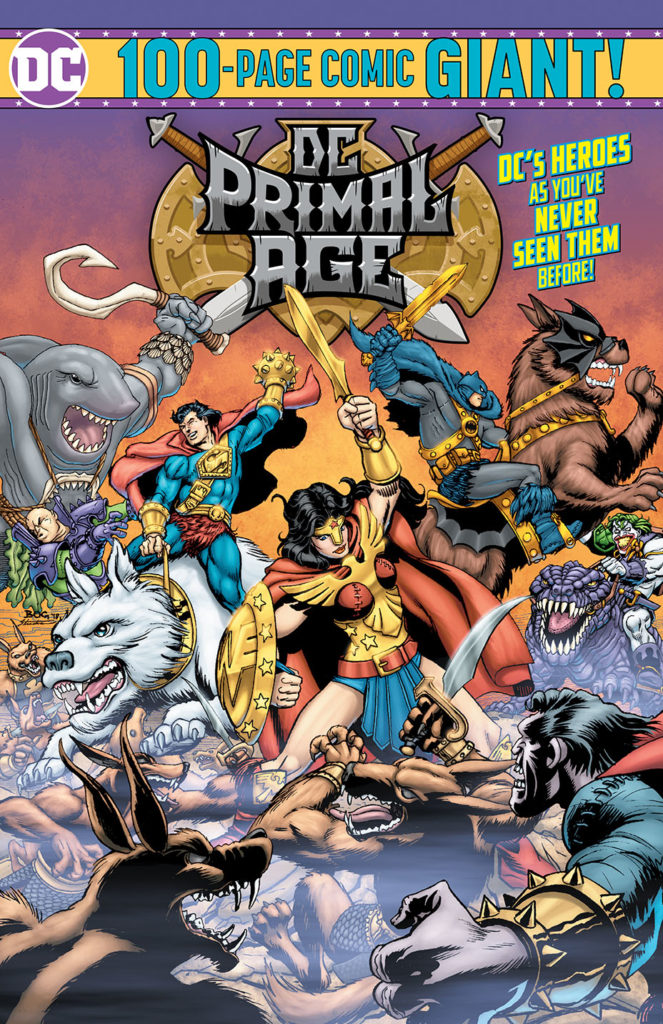 1:04:39-1:10:45:  Graeme has read the Target exclusive DC Primal Age 100 pg. giant, and has some thoughts about this eccentric (but not uncharming!) toy line tie-in!
1:10:45-1:28:10: What else has Graeme been reading? Why, the Secret Society of Super-Villains, Vols. 1 and 2, of course!  The reason why Graeme has been reading it might surprise you (unless you follow our tumblr, in which case you’ll already be in the know).  Come for Graeme’s strangely otherworldly echoey voice, stay for the amazing post-Kirby Fourth World shenanigans.
1:28:10-1:46:44: And as long as our eyes are turned to a four-color past, Back Issue Magazine #110 has a long article about the storylines Steve Englehart planned to write for Marvel in the ‘80s when he was canned.  (Thanks to Martin Gray for the tip!)
1:46:44-1:51:05: Talking about possibly subscribing digitally to the TwoMorrows books leads us back to the current digital glut and our growing backlog of material to catch up with. 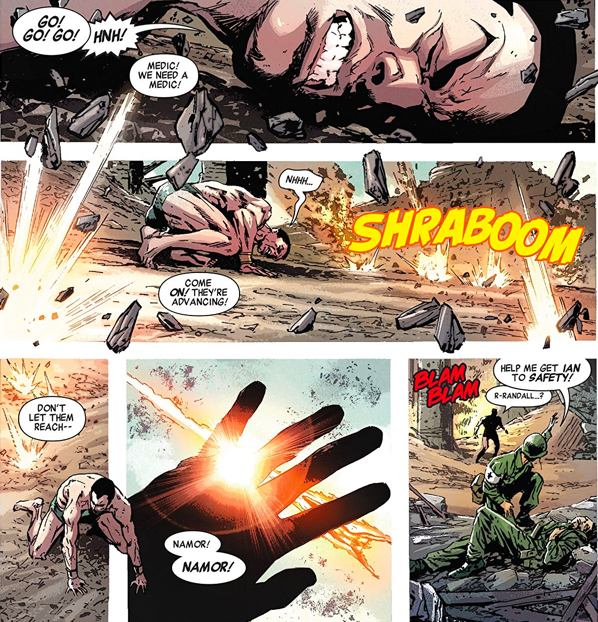 1:51:05-1:58:14: Graeme read two first issues from Marvel he enjoyed a great deal: Black Widow #1 by Jen & Silvia Soska and Flaviano; and Invaders #1 by Chip Zdarsky, Butch Guice, and Carlos Magno.
1:58:14-2:14:47: We talk a bit about Diamond’s bestselling comics for 2018 as well as the top ten graphic novels.  Also discussed:  the power of Saga; the power of Paper Girls; the power of ongoing publication; the power of repeatedly typing “the power,” and much more.
2:14:47-2:28:50:  Symbiote Spider-Man #1—an attempt for Marvel to flood the the market, or a sign of the possible influence of C.B. Cebulski as E-I-C?  And related to that, a bit of comics news, Graeme remembers just now: Rob Liefeld returning to X-Men with Major X, a new series.! (That he’s writing, not arting.)  Also discussed: what is Jonathan Hickman up to these days?
2:28:50-end:  Closing comments!  Look for us on  Stitcher! Itunes! Instagram! Twitter together and separately: Graeme and Jeff! Matt! Tumblr, and  on Patreon where a wonderful group of people make this all possible, including the kind crew at American Ninth Art Studios and Empress Audrey, Queen of the Galaxy, to whom we are especially grateful for their continuing support of this podcast.  And then we’re out!
NEXT WEEK:  Skip week!  But join us in two weeks for a new episode and maybe the official announcement of our next read-through!