While Jeff does comic reviews, I’m apparently doing graphic novel reviews this week because that’s how… I… roll…? Okay, I admit it. I got nothing aside from this pairing of what the Internet used to call “OGN”s.

Petty Theft by Pascal Girard and Shoplifter by Michael Cho: In case the titles don’t give it away, there’s a kleptomaniac connection going on between these two books (I tried to write “kleptomaniac konnection,” like it was some kind of alliterative Kinks rip-off, but auto-correct pulled me up, thankfully). They’re hardly the same book: Girard’s book is a “heavily fictionalized memoir” that sees him investigating, and ultimately falling for, a woman he sees stealing one of his books in a store by chance, whereas Cho’s debut graphic novel is… I’m trying to think of a nice way to say “like an extended remix of a story Adrian Tomine would’ve written a decade ago, only the movie version that would star Zoe Kazan playing Asian” and utterly failing. 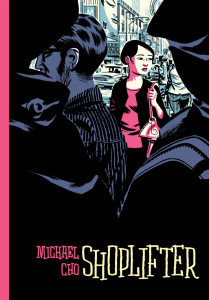 Somehow, I think you might be able to tell that I wasn’t a fan of Shoplifter’s writing by now, and it’s true; there is little if anything original here, from the sense of twentysomething ennui and, like, seriously looking for something real in this world of commodities, man (“Sometimes I think I only see moments like that through some kind of screen,” lead character Corrina narrates at one point, thinking about a beautiful sunset. Later, she complains that she’s “just treading water, waiting for something to break.”) to the stock characters that slip in and out of the narrative. Look! There’s the sexy receptionist who isn’t as weighed down with angst as Corrina! Hey, there’s the wise and yet patronizing boss who’s doling out something that might be wisdom or bullshit, and even he doesn’t know the difference! And, yes, there’s the simple, lowly store cashier, who nonetheless has a moral center and wisdom beyond his social status.

Corrina drags as a lead and narrator, as well; she alternates between entitled and powerless, snarking about “first world privilege” — she only steals from big box stores, because “it’s just clerks earning minimum wage from an owner who’ll never know my name” — while complaining that she can’t give up her ad agency job because she couldn’t afford the condo by waiting tables. The plot, as sleight as it is, is entirely obvious from the start and unfolds pretty much exactly as you’d expect. It is, on a writing level, something you could easily and happily avoid.

Except, it looks amazing. Admittedly, I read a black and white advance copy that didn’t feature what’s being called “two-color illustrations” in the final book, out September, but what I saw nonetheless was just beautiful work that is reminiscent of Darwyn Cooke’s Parker books, but far more subdued and, oddly, more contemporary (It also reminded me at times of Jaime Hernandez and J. Bone, as well as the afore-mentioned Adrian Tomine. All things said, that’s pretty good company to be in). As bad as the writing is, the art more than makes up for it — this may be one of the best-looking comics to be released this year, and as such, something that I suspect will make a lot of people want to check it out. Just, you know, don’t read the words.

Petty Theft, on the other hand, is a book where the writing overpowers the art, which is simple and sketchy in a pleasant, but hardly eye-catching, way (Judge for yourself, there’s a preview here). In terms of writing, though, and sticking with the movie comparison: if Shoplifter is every indie movie cliche in one, Petty Theft is a Woody Allen “joint,” but one of the early ones where he was still funny and doing romantic comedies that people liked. 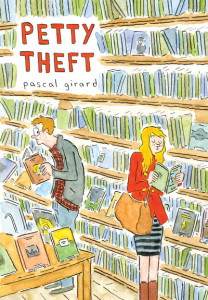 In addition to intensely neurotic self-portraits, Girard shares a pleasant shapelessness with early Allen; both feature scenes that are more jokes or snippets of conversations instead of anything more formal, and characterization thrown out in favor of set-ups, punchlines and unattainable, free-spirited romantic figures. That weird, vague structure works in a way that Shoplifter doesn’t, though; it feels more true to life, and also more endearing purely because there’s less of a sense of self-importance present (Also, Girard’s thief doesn’t try to offer a defense for her actions, essentially just arguing “I steal because I want to, I like books” when confronted). I don’t want to suggest that Petty Theft is in anyway more original than Shoplifter, because that’s definitely not the case (It merely steals from different sources, and ones less prevalent in today’s pop culture); it is, however, more entertaining and more complete in and of itself.

Of course, now that we’ve had these two books with similar themes, I feel like we need one more before we can officially label this a trend. Maybe the next one can lift its narrative approach from a big summer blockbuster movie, just to keep that theme going, too.