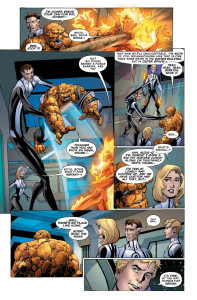 Because I (a) have Marvel Unlimited, (b) find myself drawn to Fantastic Four comics even when I strongly suspect that they’ll only disappoint me—I am one of the few people online who’ll admit to reading the entire DeFalco/Ryan run—and (c) there’s something about this particular run that calls to me like a siren or a car crash, I found myself reading 2013-2014’s Fantastic Four #1-16 over the weekend. It was, it turns out, not as bad as I’d anticipated, but in a way that only made things far more frustrating.

There are two fatal flaws in the run—well, three, but one of those (Mark Bagley as artist) is arguably an entirely subjective opinion depending on whether or not you dig an artist who draws every character as a gangly teenager so that you genuinely can’t tell the difference between the pre-teen Franklin Richards and early-20s (?) Johnny Storm at times. One of them was seemingly unavoidable (The replacement of Matt Fraction as writer as the series is approaching its conclusion), the other something that could have been avoided with more time and attention. To put it in layman’s terms, the story of these sixteen issues just doesn’t hold together.

You can see that it’s meant to. In one of Fraction’s latter issues, he has Reed Richards explain how the seemingly-random adventures of the run to date were actually part of a plan that he had concocted because he’s a genius who had a plan all along to solve the mystery of his powers suddenly killing him; similarly, when Karl Kesel—Fraction’s replacement, brought on to stick the landing with three issues to go—tries to explain that same mystery, there are callbacks to an earlier issue, but it all feels sketchy and unconvincing, as if it’s a first draft where the idea is there but the execution is lacking (In Kesel’s case, the problem lies in what was missing from Fraction’s earlier issue, but that could hardly be changed at that point; he should’ve either written around it or ducked the idea altogether).

Kesel’s final three issues feel particularly odd after thirteen issues of Fraction’s guidance. It’s not merely that there’s a tonal difference—Kesel’s FF feels more “like” the characters, as opposed to Fraction’s take on the team, for want of a better way to put it; it’s not that Fraction didn’t do his homework, because he clearly did, but that he nevertheless was too present in each of their voices, skewing them just slightly off, just enough for it to be noticeable—but there’s a shift in the pacing and the amount of focus in the writing, as well.

Fraction’s Fantastic Four never quite came together, despite clearly great intentions. It’s obvious from the first issue, which starts with a scene set a year in the future, that he was trying to build something that was very structured and intentional, but the actual work didn’t live up to that (Tellingly, perhaps, the moment that he flashed forward to in that first issue turned out to be nowhere near a climactic moment in the final story; a sign that Kesel’s finale was something other than what had originally been intended, perhaps). Everything felt underdeveloped, in need of a second draft or another pass. It’s not that it’s bad, because it’s not; the problem is that it’s not good, either. Instead, it feels frustratingly grounded and unfinished.

(It also feels unoriginal, which is a familiar problem with this title and still arguably the biggest one that any Fantastic Four writer has to struggle with these days. Too much of what happens in this run is a remix of what we’ve seen before, though: Historical figures aren’t who they appear to be, just like when Ben Grimm turned out to be Blackbeard in Lee and Kirby’s run—also odd is that we get that plot twice during Fraction’s thirteen issues—or the Skrulls are back trying to cause mischief and Reed turns them into cows. Perhaps these were meant as cute easter eggs, but they don’t come across that way, sadly. Even issues meant to explore the characters’ histories come across as rehashes, instead of revealing anything new about them.) 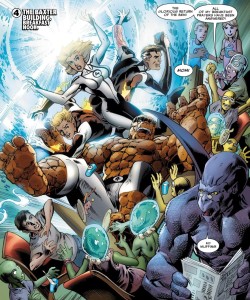 The biggest sin of the sixteen issues is a simple one: there is far too much that doesn’t make sense to fail to bring the reader down. Suspension of disbelief can only be sustained for too long, and the flabbiness of these issues overwhelms it far too early with no chance of recovery. This isn’t confined to Fraction; Kesel’s attempt to resolve the central mystery of the FF’s powers turning on them just simply doesn’t make sense, and especially so when the mechanics behind it are turned on their heads later in the climax. The predominant feeling of sixteen issues is one of an authorial voice saying “Don’t ask, just buy it,” but without the sense of glee and excitement that accompanied Kirby’s original boast.

That this run is so close to being “right” is almost the worst thing about it. There’s a sense throughout the entire thing of a sincere effort being put forth on behalf of everyone—even Bagley, whose work is, well, as Mark Bagley as ever—but it never quite coalescing into something that works. Perhaps the title really is one that defeats almost all that attempt to conquer it, transforming everything into another adventure by the Challengers of the Known.