Following on from last week’s read of the entire Fraction/Bagley/Kesel/Ienco Fantastic Four, I spent part of this week re-reading of the companion title, the Fraction/All-Allred FF. The short version? Like many people pointed out in the comments, it’s a lot, lot better.

For one thing, there’s a coherence to it that’s lacking in the main Fantastic Four series—although it occasionally approaches the haphazard and fragmented plotting of F4, there’s a character consistency and longterm arcs that redeem and, to a large extent, disguise the stuttering rhythm of storylines shuddering into and out of motion. In fact, alongside the art of Mike and Laura Allred—and I’ll get to that soon enough—it’s the character work that makes FF work so well.

Not so much the overwrought Ant-Man arc, which seems to takes precedence over almost everything else in terms of Fraction’s interest. That makes sense: he’s essentially another of the writer’s hapless, wisecracking but essentially ineffectual loser protagonists, like Hawkeye in that title, who shambles through stories feeling pain and being misunderstood yet adored despite his lack of sensitivity to everyone else’s emotions. (It’s interesting that the Scott Lang that finishes the series, as written by Lee Allred, is far more proactive and kinder, less wrapped up in his internal angst, than what we’ve seen before; is it Allred having more interest in that kind of character, or was Fraction planning for him to come into this persona all along but had to leave the title too early to see it through?) It’s tempting to call this kind of character a Mary Sue for Fraction, if only that didn’t seem quite so unkind.

In fact, none of the core four adults of the FF title offer much in the way of interesting or worthwhile character work—She-Hulk and Medusa get reduced to cat-fighting maternal types who are robbed of much of their agency, oddly enough (Something that’s very unlike Fraction, for his sins), while Darla Deering’s evolution into a superhero feels both forced and all-too-sudden; she goes from self-pitying pop star to Miss Thing in the space of an impassioned plea and the quick revival of the artificial Thing suit. She remains an endearing character, but never one with much depth or believability.

No, it’s the kids of the title that are the most charming, and also the most off-the-wall; while the A-plots of each issue inevitably seek to show up the replacement FF as well-meaning but flawed, Fraction (and, to a lesser extent, Allred) takes the opportunity to go into less obvious, and far kinder, places with the kids and their plot lines: the amazingly touching moment where Tong realizes that she feels more comfortable as a girl (“Are you still my brothers? Are you still my family?” and you’re just shouting at the page say yes or I will be heartbroken) may be the scene most shared on Tumblr, but Adolf the Impossible Kid and Bentley both get their moments in the sun as well, and are just as winning in their own ways.

It’s these moments—when Fraction sneaks away from the superhero stuff and instead writes about messier, more honest emotions and experiences—that make FF, and also make me as a reader wish that he’d just write the book centering around the kids that it felt like he really wanted to. Imagine how good a series that would be (This skill when writing about “real stuff” is one of the reasons Sex Criminals can be so good, despite everything; the most recent issue was astounding, in part because it dropped the high concept to write about depression in a way that felt human and true). 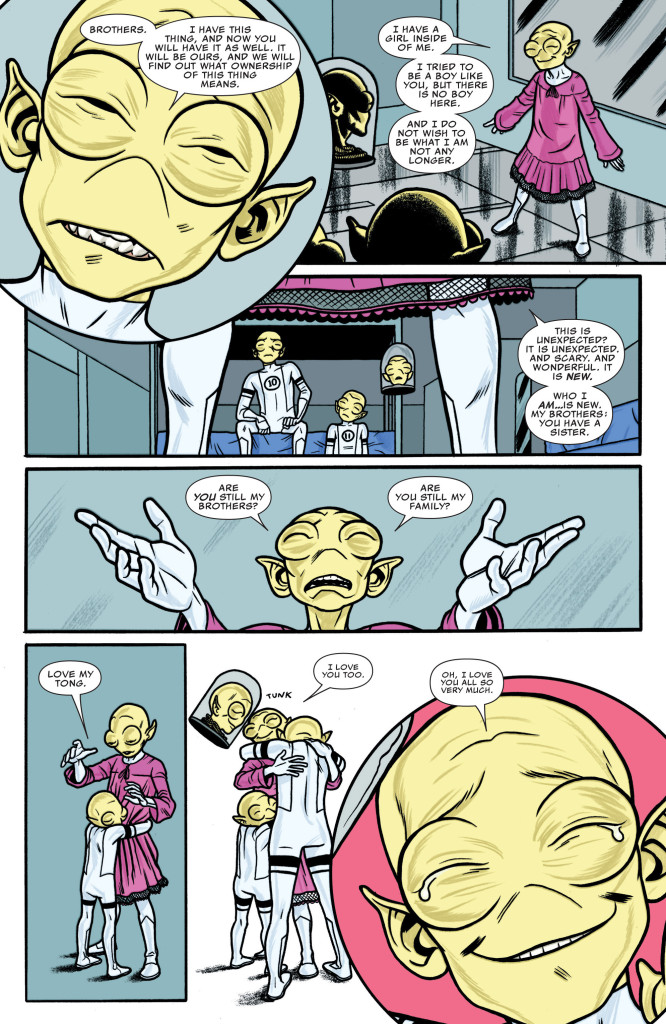 Fraction (and Lee Allred) are only part of the appeal of the series, though; the art—primarily by Mike and Laura Allred, although Joe Quinones offers up a couple of wonderful fill-in issues—adds to the off-kilter charm. It’s almost impossible to imagine this book in the hands of other Marvel artists, with their harsher lines and more aggressive visuals. There’s a softness (and, in many ways, a nostalgia) to Allred’s line that makes it feel more comfortable and approachable in a way that other superhero artists’ work isn’t; a sense of whimsy and lightness, too. Imagine, say, John Romita Jr. drawing the very same script and you have something that would feel more oppressive, and less inviting.

Allred’s (Allreds’?) visuals also add to the idea that this isn’t a traditional Marvel book on a subliminal level, as well, and lend something—a humanity, perhaps—to Fraction’s words even on the worst stuff in the book. As strange as it may sound, I almost wish he’d had the chance to work with Fraction on the short-lived Defenders series, as terrible as that ended up being. Perhaps his art would have been able to normalize the tone in some way that could’ve helped the book out. Great comics that we’ll never see, part seventy-two.

In many ways, FF is more of a Fantastic Four for today than Fraction’s Fantastic Four ended up being. It certainly updates the “it’s superheroes, but just like us” modus operandi in a more convincing manner, and also offers something new instead of, as Fraction’s characters have an unconvincing tendency to say, the “same-o, same-o.” If only we’d managed 32 issues of this, instead of just 16 and 16 of the “main” title.

3 comments on “For FF‘s Sake: Graeme Jumps Over Onto The Companion Fraction Fantastic Title”