For all that I’ve given Jeff shit on the podcast for his continued support of Batman: Eternal — a series that he doesn’t seem to be enjoying as much as enduring, based upon what he’s said about recent issues — I have to admit that I have kept up my own unhealthy DC weekly fix in the shape of The New 52: Futures End, a series that continues to confound expectations (and, increasingly, understanding) the longer it continues.

By this point in the series — #37 is out this week, with Ryan Sook delivering a cover that looks as if he’s channeling Steve Pugh’s 1990s style, unexpectedly — it’s not an exaggeration to say that the storylines have become so convoluted that I’m not entirely sure why some things are happening anymore, nor what is necessarily has to do with earlier events featuring the same characters. So far, for example, Grifter has gone from being a lone wolf, hunting down alien invaders, to a living lie detector forced to work for Cadmus against his will, to a desperate man hiding on an island filled with robot-controlled superheroes from an alternate Earth, to a surrogate father to an omnipotent genetically-modified clone that thinks she’s an eight-year-old girl. See: doesn’t that just sound like a coherent chain of cause-and-effect events?

Grifter isn’t alone in the almost arbitrary changes: Ronnie Raymond went from someone who didn’t want to be Firestorm to someone who only wanted to be Firestorm, to someone who could never be Firestorm, to dead (Spoiler alert!) in such a way that seemed entirely unrelated to anything other than wherever the plot needed Raymond’s emotional state to be in any given issue. Shazam literally took up the mantle of Superman off-panel, then gave it up when confronted by Lois Lane midway through the series — and, notably, when the real Superman showed in the book as a character — only to appear later, again dressed as Superman.

Admittedly, that’s better treatment than Mr. Terrific, who was supposed to be a major player in the series but who disappears for long stretches of time because it’s clear that his plot isn’t long enough to stretch the entire series if he appeared every issue — although, given his unexplained evolution into an asshole (Once again, comic books mistake “being arrogant” with “being a straight-up dick”), that might not be the worst thing, all told. Similarly, characters like Tim Drake, Lois Lane and the Stormwatch team of Hawkman, the Atom and Amethyst make irregular appearances in the book, their plots dropped and picked back up seemingly at random. 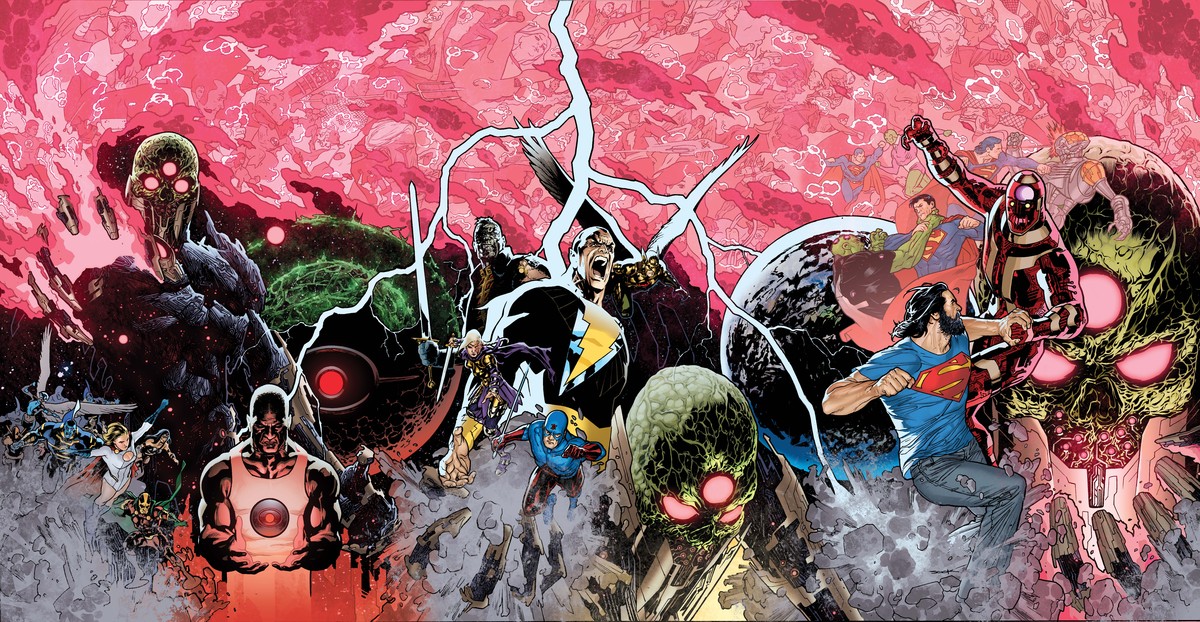 The stuttering pacing, like the increasingly nonsensical plots and the incoherent cast list, are all part of the same central problem with the series: the longer it continues, the more it reads as if no-one expected to burn through story as quickly as they did (or, else, the initial plan for the series consisted of “We know where we’re starting, we know where we’re ending, let’s just wing the middle part while it’s happening”). As difficult as Futures End is to read, there’s a perverse part of me that wishes it were an ongoing, just to see at what point everyone involved just threw up their hands and admitted they’d run out of even the most ridiculous, out-of-nowhere plot twists and would like the chance to start over, please.

At the launch of this series, there was enough of a 52 vibe to get me excited about where it could go, even if the character line-up wasn’t entirely my bag. As we’re approaching the finish line, it could be argued that Futures End has started to approach Countdown to Final Crisis more, except without even the promise of Grant Morrison at the end to make everything feel better. It’s a series that’s gone impressively off the rails, but I know that I’m in it for the long haul.

3 comments on “I Should’ve Known Better: Graeme on The Latter Days of New 52: Futures End”