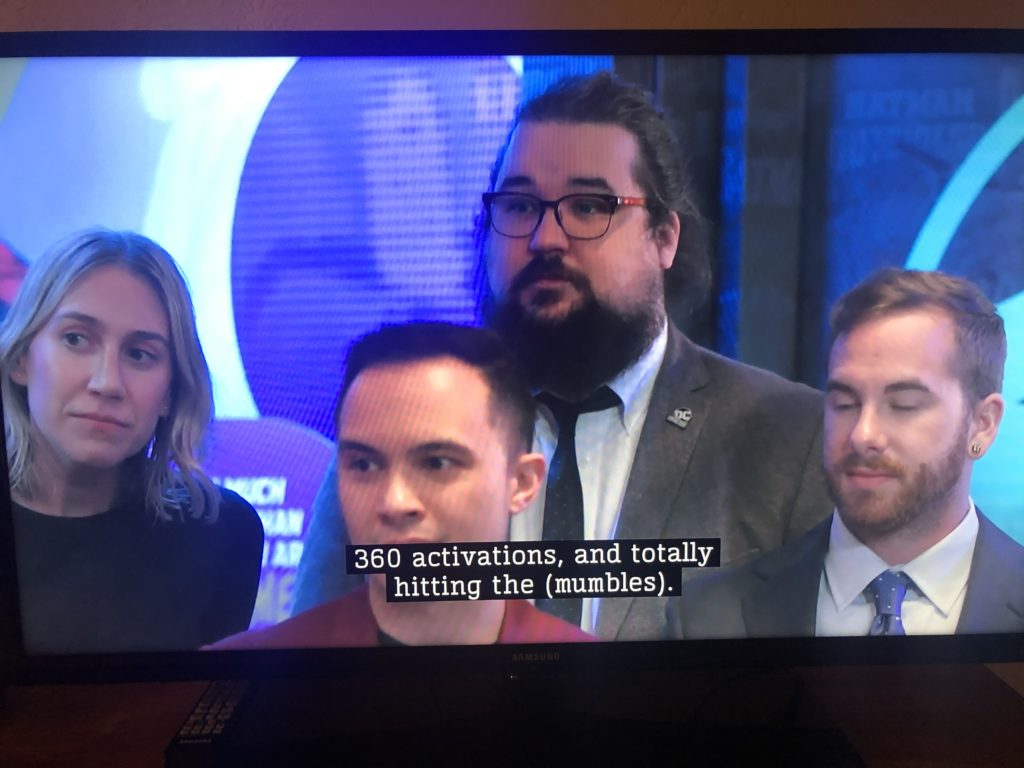 00:01-06:01:  Greetings from Graeme “Whole Day” McMillan and Jeff “Poor Guy” Lester! Graeme is medical emergency adjacent; Jeff is Jeff; nevertheless, we decide to persist in the face of adversity and press on to discuss…attempted murder!!!!
6:01-41:33: Yes, at Graeme’s insistence, Jeff ended up watching the first season of DC Unscripted, the reality show on DC Universe that tracks ten contestants’ attempt to pitch a new reality show for DC Universe.  (Suspiciously meta premise, that.)  We discuss our reactions to the show, the actual winners, 360 activations, slide lines, ringers, and much more.
41:33-50:59: So, yes, after discussing how unlikely it would seem that someone would watch a DC Universe reality show, Graeme comes clean as “genuinely, non-ironically a fan of” Marvel’s Hero Project on Disney+!   So, ya know, what do we know, really?
50:59-58:28: “At a certain point,” Jeff says, “we have to talk about Animal World.” And because Graeme has no idea what Jeff is talking about when he says that, that point becomes immediately after Jeff gets through saying it. Discussed: Animal World, Gambling Apocalypse Kaiji, Unlimited RPS, Deadpool, and much, much more.
58:28-1:23:40: Finally busting out the comics-as-comics talk, we discuss the first nine issues or so of Dan Slott’s run on Fantastic Four, since Jeff finally girded up his loins to read them and…oof.  Discussed: A fascinating piece of pre-FF #1 fanfic concerning Sue and Ben’s relationship (in Fantastic Four #5), the FF as family, the appeal of inoffensive comics, functional families vs. dysfunctional families, and more.
1:23:40-1:52:50:  Remember when we were talking about the reading list Jeff keeps, and Graeme went, “yeah, hey, I should do that,” and then was all, “hey, I did it!” and then was like, “no wait, it’s not complete I’ll read it to you next time?”  THAT TIME IS NOW.  (Jeff also reads his reading list, but more for a comedic contrast than anything.)  Also discussed: Narrative exhaustion, working oneself sick, being young, a thought about old Rockstar Games video games that I don’t think I got to finish?, Jeff watching Graeme’s old cat, Luna, and more.
1:52:50-1:58:56: All the grousing about narrative aside, Jeff really wants to recommend An Invitation From A Crab, a manga from indie Japanese cartoonist Panpanya.  Jeff busts out a lot of great creators—Kafka!, Woodring!, Miyazaki!—in his flailing around trying to convey what’s so great about this collection of stories.  It’s very good!
1:58:56-2:14:59: And Graeme has spent a lot of time, when not reading Birds of Prey comics for work, reading Justice League comics from the late ‘80s, early ‘90s. Tune in for an analysis of the days of Giffen, DeMatteis, Jones, Jurgens, and more. Also discussed:  the discrepancy between one title between runs; mutant orgies; and more.
2:14:59-end:  Closing Comments! Well, it should be but somehow we go directly from giant robots to Bobbie Gentry? Look for us on  Stitcher! Itunes! Instagram! Twitter together and separately: Graeme and Jeff! Tumblr, and  on Patreon where a wonderful group of people make this all possible, including Empress Audrey, Queen of the Galaxy, to whom we are especially grateful for her continuing support of this podcast.  (Also, don’t forget about Spotify!)
Next week: Drokk!! It’s time for Drokk!!