Yup, here it is: our 174th episode (by one count, at least), just in time for you to snort some Hitler and celebrate Mary Jane Watson’s birthday!

Well, since I’m sure you’ve got a busy day ahead of you, allow me to present to you…without further ado…our show notes!

00:00-6:00: Greetings! Death threats! As Jeff says, “Listeners! Welcome to what may be the last episode of Wait, What?” Yes, it’s a bone-chilling opening for a podcast that jumps right in and barely looks back, with an introduction of what we’re going to be talking about length: a frank (and profanity-filled) discussion of Avengers #1-36, New Avengers #1-24, and Infinity #1-6, all written by Jonathan Hickman and a elite cadre of Marvel’s shock troops!

6:00-25:42: But first, before we do that, since this was recorded on the day the second Star Wars trailer dropped (embedded above), we have to talk about it first. Also discussed: Return of the Jedi, The Empire Strikes Back, Star Trek Into Darkness, the franchise that taught you not to trust franchises, class struggle in Star Wars, the Mad Max: Fury Road trailer (also embedded above), Terminator Genisys trailer, the Avengers: Age of Ultron trailer, the weird fragmented point trailers are at right now, the second Ant-Man trailer, and more.
25:42-1:11:05: And now we get back to Jonathan Hickman, Avengers #1-36, New Avengers #1-24, and Infinity #1-6, with liberty and spoilers for all.  Because we are trying to be better with context, fasten your seatbelts as we try to describe everything that’s going on and break down our reactions. (And if you want to read along, all issues discussed are currently available on Marvel Unlimited). Discussed: plot hammering, what Jeff characterizes as the “contemporary American spirit” at the heart of Hickman’s story, the powers and drawback of repetition, a story about the inevitability of mortality as told in a story featuring characters who we know technically will not actually die; Marvel’s former series What If, #NotMyTonyStark, shared universes, D&D references, Stan Lee’s pubic hair, Secret Wars, the Nick Spencer train, the latest iPad update for the Marvel Unlimited app, the 500 Star Wars comics dropped on the app this week (seriously, if you find yourself hankering for the Dark Horse Expanded Universe, or you just want to re-read that issue where Michael Golden drew a really keen lightsaber fight, it is now exceptionally easy to get your hands on with a subscription to MU), and more. 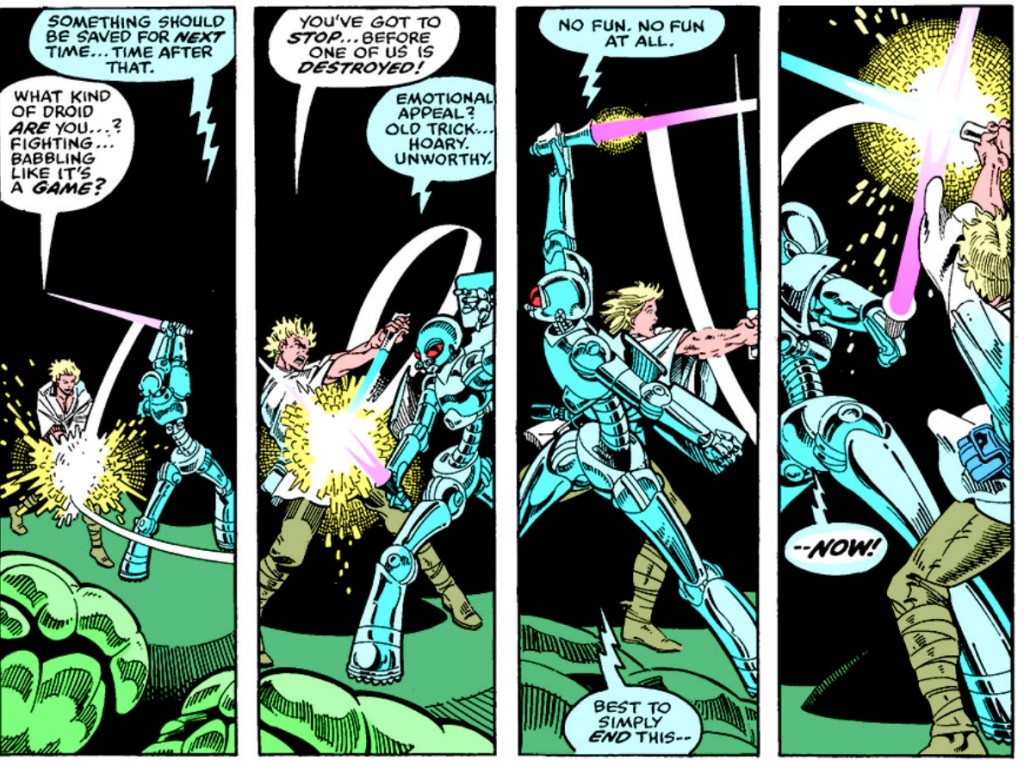 1:11:05-1:20:58: The mention of the iPad (and more specifically, Jeff’s not-subtle hint that Graeme should get one) leads to a story from Graeme about what he’s been up to since the last time we podcasted. (Spoiler: a lot of what he’s been up to involves sitting in the Apple Store.) Throw in a cameo from Ernie and Gus-Gus and you’ve got a lovely non-comic intermission! 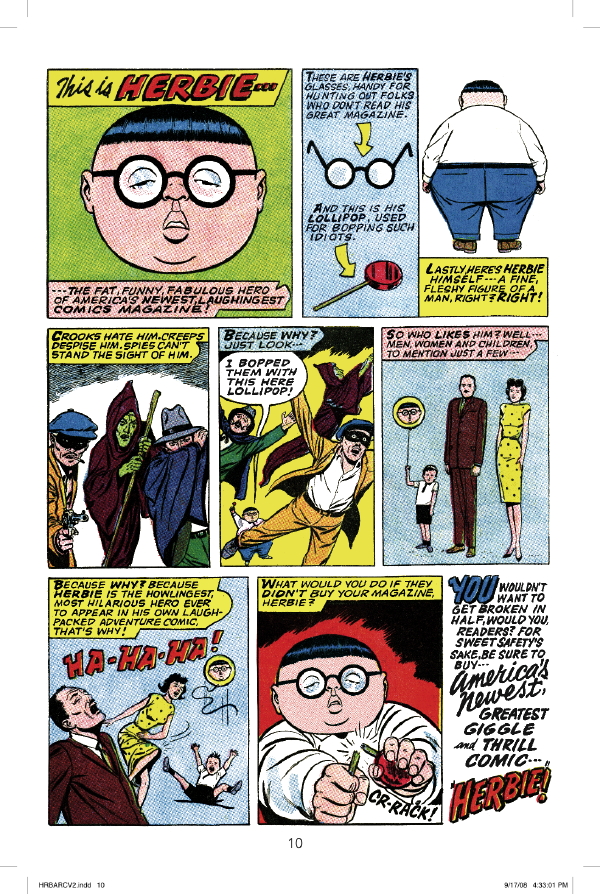 (Did not crop after ganking; probably should’ve)

1:20:58-1:43:20: Returning from that intermission, patron Scott Ashworth requested that we read one of the oldest cult comics, Herbie the Fat Fury, by Richard Hughes and Ogden Whitney, which Graeme with his superior library skills (and superior library) is able to do! Discussed: Alan Moore, a certain type of “satire,” Groundhog Day (the movie, not the holiday), JFK (the person, not the airport), Stockholm Syndrome, Gold Key Star Trek comics, Daniel Pinkwater, pre- and post-war America, and coming up next on our to-read list: Opus by Satoshi Kon, as requested by Eric Rupe.  Also, not mentioned in our discussion, but let me throw in a counterbalancing opinion about Herbie from Bill Reed, and an uncovered connection between Herbie and Watchmen. Those “Comics Should Be Good” guys are great, aren’t they? 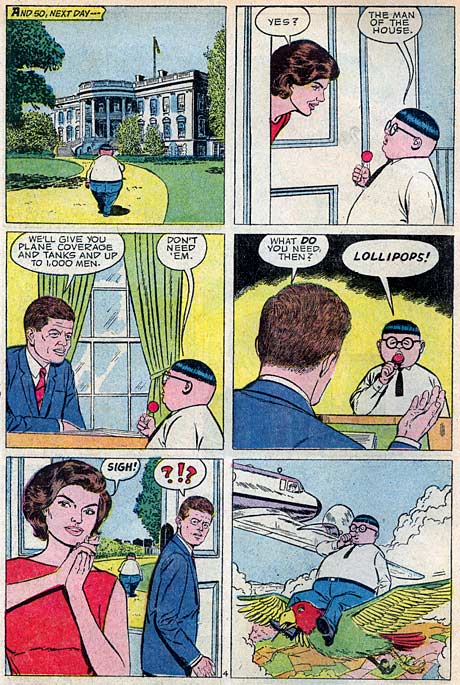 1:43:20-1:55:21: Graeme also read the first week of Convergence titles from DC, which he wrote about for the website  but also discusses at a bit more length here. Mentioned: Alisa Kwitney on Batgirl, Lee Weeks on Superman, Jeff Parker and Tim Truman on Hawkman (upcoming), someone’s butt talking to someone else’s boobs, editorial inconsistencies, Convergence as an event where you can read the crossover books without having to read the main event title; and more. 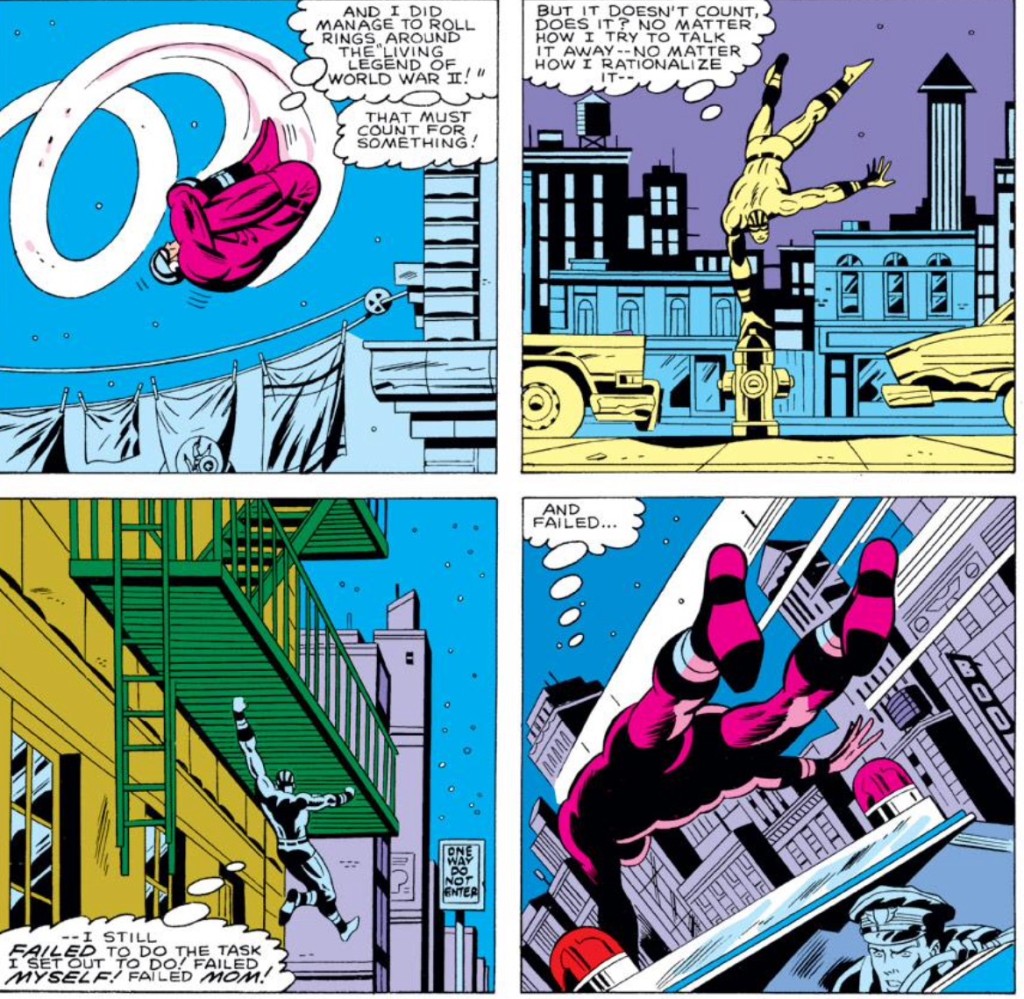 1:55:21-2:06:51: Although he didn’t have anything special planned to say (or anything planned at all), Jeff nevertheless wanted to talk about the passing of Herb Trimpe, comic artist, writer, and teacher who managed to fuse the imperatives of a Marvel house style with his own more unique one, and gave us a lot of great comics along the way: the Incredible Hulk, Shogun Warriors, Godzilla, and G.I. Joe, a fill-in issue of Captain America written by Bill Mantlo (issue #291, which Jeff does an impressive job of partially misremembering here (and again, thanks to Marvel Unlimited, I dug up that issue, read it and screenshot it just now), the Phantom Eagle in Marvel Super-Heroes #16, issues of G.I. Joe Special Missions that he wrote, and more. Thank you, Herb.

2:06:51-end: Closing comments, a.k.a., “when the hell is our next episode, we honestly have no god-damned idea.” (Hint, it’s a skip week coming up, so look for us in a fortnight.)  The Small Tote Bag! Places to look for us at—Stitcher! Itunes! Twitter! Tumblr! and, of course, on Patreon where, as of this count, 102 patrons make this whole thing possible.

Next Week: there is no next week!  (As far as a podcast episode is concerned) but then come back the week after that! And the week after that!  Etc., etc.  And remember, if you need just a straight text-only link to cut and paste into your browser or program of choice, check out the first comment!