00:00-9:21: Hello, hello, hello!  Today you’re in for something out of the ordinary, as Gary Lactus (from Silence!), Chico Leo (of Fan Bros), and Paul O’Brien of House To Astonish join Jeff Lester on Battlepod for an infinite secret podcast crossover!  Yes, Graeme was whisked away by the Beyonder to another part of the strange dimension known as Battlepod, leaving me to fend for myself against three of the sharpest knives in the comic book podcasting drawer. First up are speedy introductions to one another—punctuated by a lot of “Fer Sure! Fer Sure!” in what is a sudden thickening of my native Californian accent—and then more formal introductions of each of our esteemed guests so you know who they are, where they’re from, and why they’re awesome.

9:21-18:41: Intros out of the way, it’s time for us to turn to this episode’s theme (yes, a themed Wait, What? episode—the stakes get higher by the minute!): “The Worm Turns:  Characters, Creators and Books that we used to hate but now love or vice-versa.”  First up:  Paul O’Brien and Captain America!  Discussed by the group: propaganda, the monarchy, Frank Miller and Ales Kot, Mark Millar, good ol’ John Walker, and more.
18:41-36:34: Next, Chico Leo is at plate to talk about…Spider-Man! Discussed by the group: how a simple concept has grown less simple over time, and how attempts to simplify have somehow only made it more complex in some ways; The Simpsons vs. Harry Potter; John Byrne’s take vs. Dan Slott’s comic; the grating gear change at the end of Claremont-infused X-Men stories; Marvel continuity versus the imaginary stories of the DC Silver Age; the idea of the crossover as “naughty universe touching;” and more. 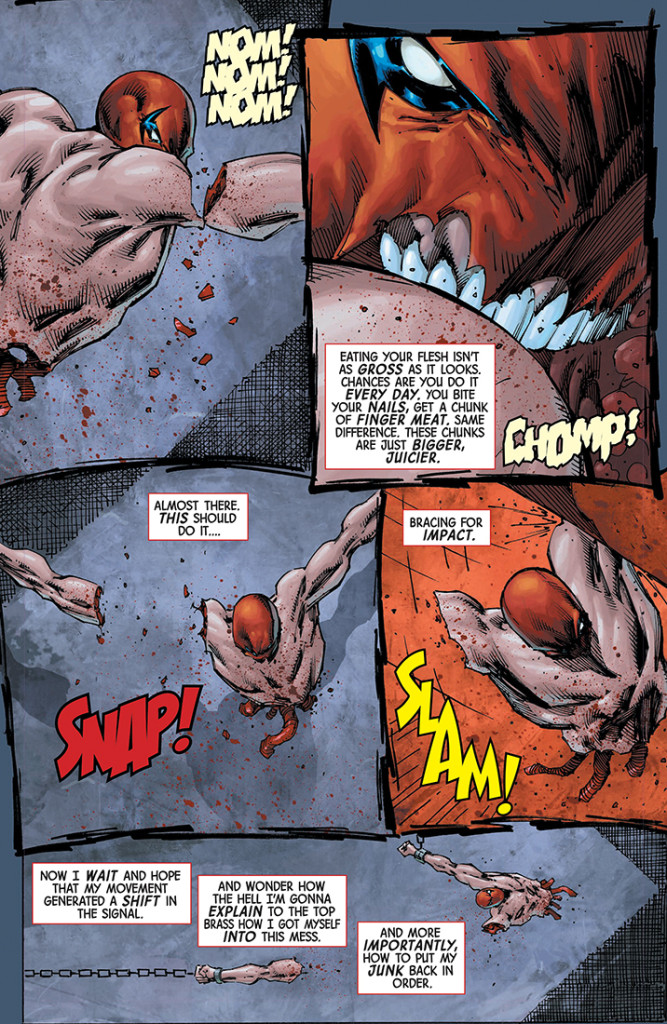 36:34-48:41: Gary Lactus is up next to talk…Bloodstrike! After discussing the history of the 90s and running into the arms of Dan Clowes, Peter Bagge, and Dan Clowes, Mr. Lactus has come around to talk the charms of one Robert Liefeld.  Discussed: feet; penises in jars; the Inkstuds interview with Rob Liefeld; the first issue of Prophet; the road from sunday school to Black Mass; “he’s a one note creator but sometimes all you need is that one note;” Rob Liefeld’s The Covenant; a quick break as one of Gary Lactus’s former heralds shows up to cause disarray; when the phrase “remarkably sane” is disappointing; and more. 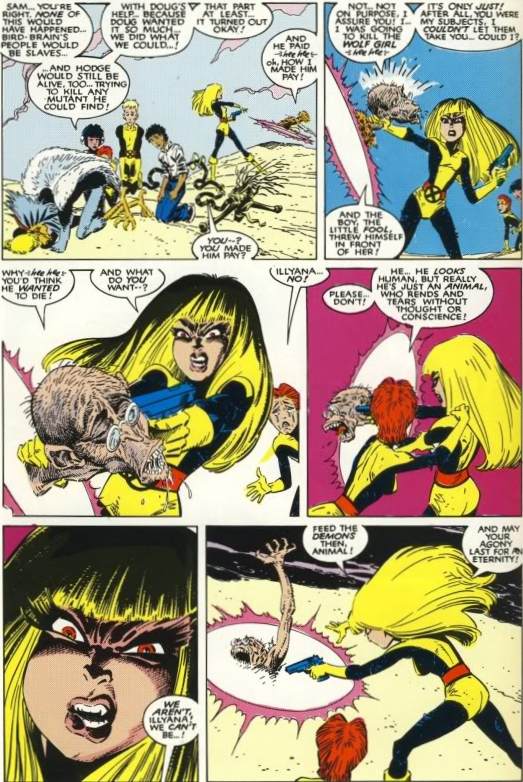 48:41-54:12: “We’re definitely in the realms of freeformville,” Jeff announces.  “Is there anyone else who maybe has a creator up their sleeve that they have switched on over time?”  And of course Paul chimes in with the name everyone was surely just about to say:  Bret Blevins.  Also discussed: BRET BLEVINS; Louise Simonson; New Mutants; Meltdown: Havok and Wolverine; the importance of watercolors to telling a serious story in the Nineties; and more.
54:12-1:00:36: For follow-up, Chico Leo talks about both a creator with whom he went from “hate” to “love”—the mighty José Luis García López—and from love to hate: Mr. Frank Miller.  Discussed:  “the goddamned Batman;” the term “mind enema;” Woody Allen, Bill Cosby, and the difference between the artist and the art; the secret career of JLGL; and more.
1:00:36-1:10:33: Gary Lactus gets another turn at the creator flip and this time he brings up an excellent choice: Mr. Joe Matt.  Discussed:  confessional comics as the big thing of the ‘90s and what happened; our ability to share and get instant affirmation; Jeff doing strange things to the word “reportage”; Chester Brown’s Paying for It; guys growing up isolated in smaller industrial cities; and more. 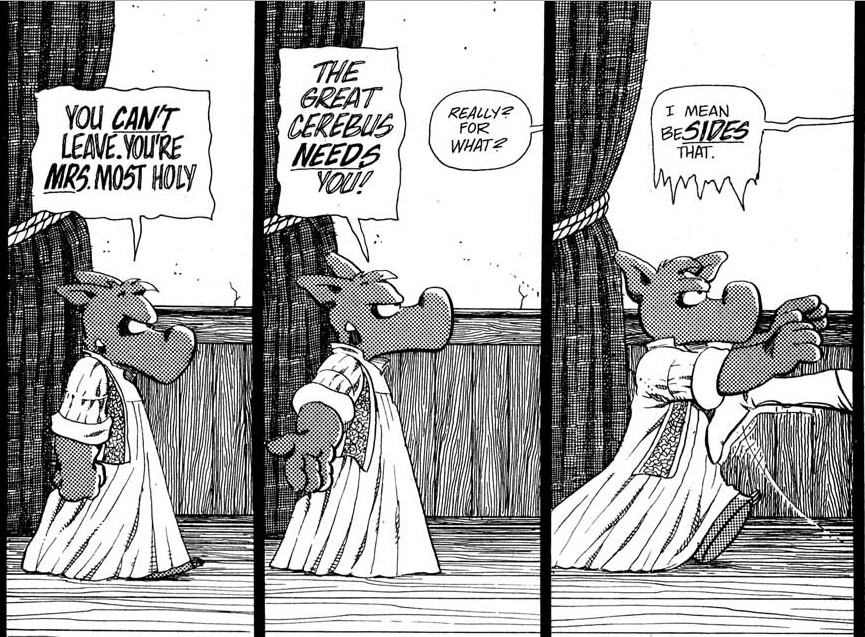 1:10:33-1:29:43:  The book round!  Paul has an excellent choice for this, just as Gary did for creator:  Cerebus The Aardvark.  Mentioned:  The gnostic heresy, the perfect phrase “one of the most technically competent pieces of outsider art ever made;” the literal disbelief with which the turn of Sim’s intentions was greeted by on the Internet; the idea of Cerebus as three different comics; Speakers’ Corner; Gary’s inability to get into Cerebus; The Strange Death of Alex Raymond; watching someone box a stump; Terry Zwigoff’s documentary Crumb; Steve Ditko and Alan Moore; and more.

1:29:43-1:36:52:  Gary Lactus has one last worm to turn, and it’s in regards to the Golden Age hero, Mr. Terrific.  It’s a delightful tale well told by GL, one that’s well worth a listen and also a great way to wrap up our adventure.
1:36:52-1:41:28: Because the shimmering cosmic curtain that has gathered is about to dissipate, a call is put out for closing shots.  Chico Leo weighs in with the book he once loved that now he hates:  Mad Magazine.  You may get a glimpse into the time displacement involved in the recording of this episode by our discussion of contemporary politics at the moment…
1:41:28-closing: Closing comments, in no small part because our bladders are incredibly full: each of us tells you where you can find us next. Since I covered a lot of that up in the intro, let me just add the twitter accounts for Mr. Lactus, Mr. Leo, Mr. O’Brien and myself. 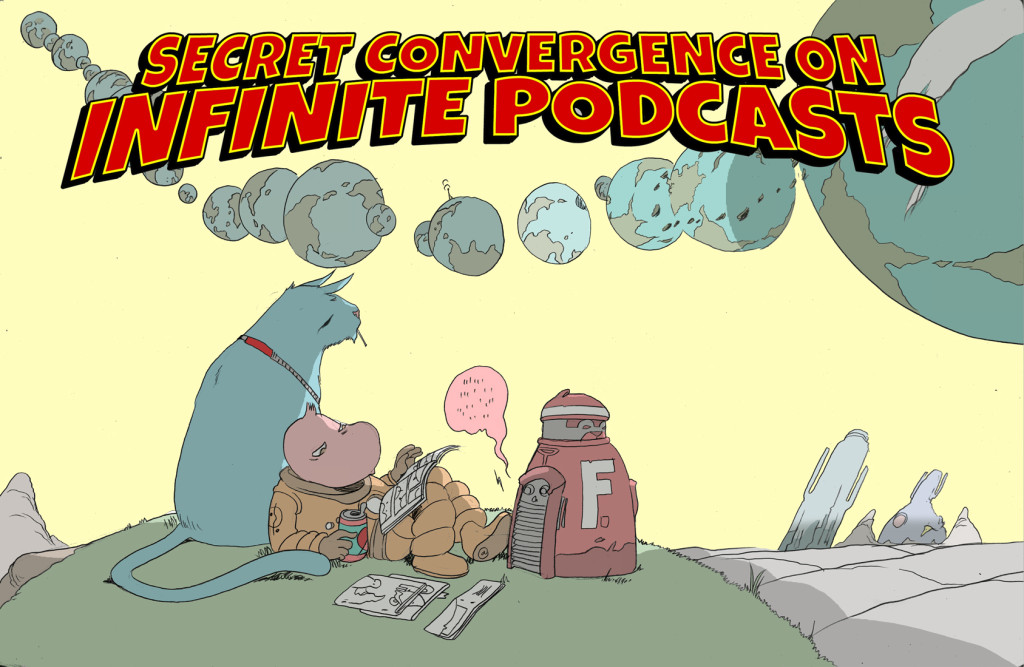 And look out for Episode 7 of the Secret Convergence on Infinite Podcasts over at House to Astonish.
NEXT WEEK:  Graeme returns in a brand new black costume for Baxter Building Episode 11!!