So…who’s in the mood for an absurdly digressive review of the first three issues of a title that’s been out for months? But, wait, here’s a bonus: you also get to hear what I think about a thirty year old movie?

Tingles, right? Anyway, join me after the jump for a whole bunch of words about…

Caliban #1-3: It’s easy to read Caliban and imagine Garth Ennis walking out of a screening of Prometheus muttering, “Fuck it, I can do a better Alien than that shit.” So far, the first three issues of Ennis’ Avatar book (illustrated by Facundo Percio) are jam packed with classic “regular joes and janes on a space journey gone wrong” riffs familiar to any fan of Ridley Scott’s 1979 classic, as the mining ship Caliban “collides” in mid-warp with an alien craft, creating a damaged fusion of the two ships. In trying to repair their ship and explore the new surroundings (it’s like “reality is doing the best with what it’s got,” as one crew member puts it in issue #2), the crew of the Caliban unleashes a mysterious essence with a specific and seemingly predatory agenda lined up for them.

In many ways, it’s bar band Ennis, nipping off to Ye Olde Avatar Pub (other names I considered for Ye Olde Avatar Pub: “The Fourteen Covers,” “Torture & Tits Out,” and “The ‘Here Now, What’s This I Found in Alan Moore’s Beard, And Can We Get Four Issues Out of It’ Juice-a-teria”) to jam out some covers with the house band, and, honestly, I am okay with that.

It’s not just that Ennis is a fan of Alien—the shelves of video and comic shops are clogged with terrible, terrible rip-offs of Alien, many of them made by big fans of the movie and the sequels (in fact, some of them are sequels)—it’s that (a) Ennis is Ennis, and is therefore going to guarantee at least a certain level of craft even when fucking off; and (b) Ennis and I seem to pretty sympatico about some of the more overlooked stuff that makes the first Alien movie so great.

(Although, you know, that said, I’m really curious if Ennis called the ship Caliban because Caliban is the bestial servant in Shakespeare’s The Tempest, a play which had bits pillaged and transfigured—missing genius, only daughter, aforementioned inhuman servant, control of the elements, drunken cook [trusting you on that last one, Wikipedia]—to make the science-fiction epic Forbidden Planet, which in turn got its bits and pieces—crew in over its head, ruins of a destroyed civilization, inhuman servant, invincible and murderous predator—plucked for Alien, or if Ennis is planning to go for the triple word score of working a scene of cannibalism into his book, since the story goes that Shakespeare’s ‘Caliban’ is an anagram of the Spanish ‘canibal,’ which is indeed where the English word comes from.)

Digression 1:  “And I just wanna digress ’cause it’s been going on so long/ readers, I’ve been doing you wrong…”

Alien gets called “Lovecraft in Space” for a very good reason—the movie features regular  joes (and janes) coming across vestiges of strange and incomprehensibly foreign cultures that have existed long before we were even born, and we are about as prepared to deal with or understand them as a snail is prepared to deal with a shaker of salt. 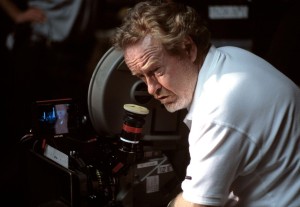 Unlike other directors, Ridley is unafraid of having his picture taken with a movie camera.

But one of the great things about good old Howard Philips Lovecraft—apart from superior networking skills that would put any hustling Internet thought aggregator to shame—is how much he feared everything. Genitalia. Water. Death. Life. The future. The past. Things you eat. Things that eat you. Black people. Yellow people. White people were okay, except for artists and non-artists, who were probably drawing or eating something they shouldn’t. Lovecraft seemed to fear everything but sleeping, the postal service, and what people thought of him. He was the ur–hikikomori, and his ability to do so without the benefit of a single chat room or dating sim make his hikikomori-ness all the more impresssive.

Alien not only has an easily recognizable kolpophobic vibe—thanks in no small part to the contributions of H.R. Giger, R.I.P.—and there’s that Alien chestburster sequence, a nifty “fear of male birth” scene as distinct and perfectly packaged as a McDonalds ketchup packet (and probably as useful for adding a quick dash of flavor to one’s film course reading curriculum). (No, don’t ask why you would add a McDonalds ketchup packet to a film course reading curriculum). Ridley Scott is clearly unafraid of cigars, being photographed near a film camera, and ridiculous screenplays, and yet Alien still is a very comprehensive collection of fears, including some very nifty “colonizers and colonized” fears (with the colonizers of course ending up on the receiving end of the deal, thanks to the facehugger scene doing double duty as an equally vivid fear of Forced Oral Copulation), fear of your co-workers, fear of your employer, fear of bodily fluids, fear of eating in public, fear of working for a bonus without being paid the bonus, fear of enclosed spaces, a fear of open spaces and most especially a fear of Star Wars. Or, more specifically, the sort of ahistoric shenanigans Star Wars espoused.

Digression 2:  “I’m So Throwed and I Don’t Know What To Do/But to Give You Part 2 of My Digressions”

To elaborate on that last point a little more, let me just posit that the two great wildly popular enduring sci-fi movies of the late ‘70s, Star Wars and Alien, are actually mirror images of each other, being as they are very different reactions of the very same sets of events—the collapse of the ‘60s and the revelations of Watergate. 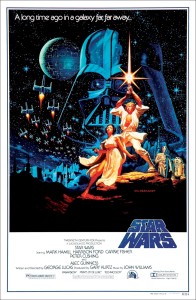 After the violence, the terror, the seeming senselessness, and, finally, open evidence of a betrayal of the public trust, Americans were tired and disillusioned. They were only too happy to put away childish things like revolution so they could turn back to the basic tenets of the Great American Dream: Cutting loose on a Friday night. Going to the movies. Working for a bonus and getting paid a bonus. And, the greatest of all American Dreams: the promise of a better future and being able to put the old world behind them.

This is what Star Wars promised right from the very start, the thing that that let them know what they were in for from the very first words: A long time ago, in a galaxy far, far away…

Alien is the same but different—it’s the future, but there is barely any mention of Earth and whether it’s better or worse off. Instead, we just see a bunch of working slobs on a ship called on to do a little bit of extra work. Like Americans of the period, who had recently put up a coat of Bicentennial wallpaper rather than deal with the exposed dry rot underneath, the crew of the Nostromo has had all their curiosity worked out of them. When presented with possible evidence of the only other sign of intelligent life in the universe, Yaphet Kotto dismisses it, complaining, “I wanna go home and party.”

And so the crew come across something from long ago and far, far away. And it does indeed fuck them up something fierce, usually while they’re bickering about who is responsible for what, and how much they should be getting paid for it. In the wake of history’s removal, there is only defenselessness and paranoia (“I don’t trust him,” Ripley says about Ash. “I don’t trust anyone,” replies Dallas, who is the damn captain of the ship.). Ripley survives not by being the virginal last girl of slasher movies, but by being clear-eyed and disciplined, unwilling to bury her head in the sand. Seen through this light, it makes a lot of sense that one of her last actions before the finale is to issue the Nostromo’s final report. History is to be recorded, so that we can be prepared.

Huh? What? Where was I? Oh, right. Ennis and Percio’s Caliban. 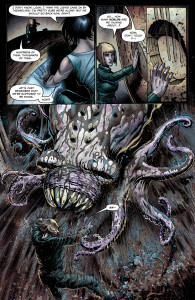 The start of one of the better sequences, so far.

Anyway, so yes. Ripley issues the Nostromo’s final report, Near the end of Alien, Ripley issues the Nostromo’s final report. Caliban opens with Nomi writing notes on her current situation as Systems Officer of mining exploration vessel Caliban. (Also, just as Ripley’s final report serves as a handy way to explain what the hell she’s doing and save the climax from a ton of exposition, Nomi’s notes are a pretty elegant infodump.) True to their spiritual predecessors on the Nostromo, the crew of the Caliban have a seemingly endless number of things to squabble about, first and foremost in the early sequence the chain of command while the captain is off banging his executive officer. We even get a nice little outburst in issue #3 from Cuthbert, a Kotto-esque dude with a chip on his shoulder.

And just as Alien lacks anything like a traditional movie star—even during a decade where the traditional movie star was about as non-traditional as Hollywood was going to get—artist Facundo Percio draws every character as distinct but not striking, a comic book filled with character actors. (Although with each successive issue, Percio and inker Sebastian Cabrol succumb a little bit more to Avatar’s recurrent disease, Burrows Syndrome, wherein figures waste away in the face until they all resemble the same character, distinguishable only by context and haircut.)

Except for a superbly icky sequence at the beginning of issue #2, Ennis has things dialed so far down they’ve moved over the course of three issues from understated to underwhelming. Some of that may be again down to Percio, Cabrol, and colorist Hernan Cabrera, who appear to understand the aesthetic they’re shooting for but never quite create that juxtaposition of dialed-up backgrounds and dialed-down acting that make A New Hope and Alien (and, of course, 2001 casting its monolithic shadow over all) do what they do so well. (Bless their hearts, they are no H.R. Giger—whose work was so unearthly screenwriter Dan O’ Bannon was allegedly inspired to revisit aspects of his Dark Star script and make a science fiction movie in which astronauts can only react with dread—much less Ron Cobb and Chris Foss, who designed the Nostromo’s spaceship and tech. If nothing else, Percio is simply outnumbered…and that’s if you don’t factor in the fact that (a) all of those guys are geniuses in their field; and (b) the brilliance of Scott in having two distinct sets of design in the film to heighten the feeling of uncanniness and invasion.)

In fact, on his end, Ennis has kept the body horror in Caliban surprisingly literal, as the predator of the two ships attacks crewmembers one by one in the interests of testing their limits of pain and injury.  And although it’s unlikely he won’t try some spin on Alien’s extreme horror (it’s not just that the guy’s chest bursts open in the mess hall, it’s what bursts out that matters), it’s not impossible, either.  Ennis’s thematic preoccupation is how humans fuck one another up. Aliens, angels, superheroes or supervillains: none of them are remotely as interesting as that.  It wouldn’t surprise me if Ennis’s invader continues to wear a human face until almost the very end.

On the other hand, Ennis might have a thing or two to say about cosmic horror if given the opportunity and Caliban is most certainly a very clear opportunity. Even if I’m far from smitten, I’m optimistic enough to keep grabbing issues as they come.

10 comments on “The Alien and the Familiar: Jeff Talks Caliban #1-3”