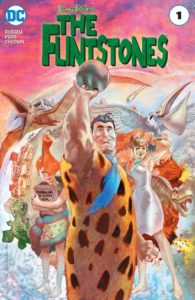 I was baffled by DC’s Hanna Barbera reboot from the moment it was announced. Where Marvel has a tendency to announce things as throwaway gags only to have them take off (looking at you, Gwenpool!), this was DC announcing an actual publishing initiative that felt like it had to be some kind of elaborate, Andy Kaufmann-esque prank.

And yet here we are.

I haven’t read all the books — I have no recollection of Wacky Races and so don’t care about the Mad Max-ified reboot; I never got into Jonny Quest and so am skipping Future Quest despite a fondness for the creative team. I’ve read the Scooby Doo book and found myself wondering who could possibly care about it, but the main element of WTF-ness there comes from watching two sexagenarians try to write “hip” dialogue for Shaggy.

But this week I read The Flintstones #1, written by Mark Russell and drawn by Steve Pugh, with colors from Chris Chuckry and letters by Dave Sharpe. And hooooooooo boy, the WTF is off the charts on this one.

It’s not a bad book, at all. Russell is good at satire, as he demonstrated on Prez,  and Pugh’s art chops are beyond reproach. And it feels pretty clear to me what Russell’s trying to do, here: you can’t “update the Flintstones” in the sense of setting them in the modern world, because … well, for reasons that are incredibly obvious. But he’s trying to update their satire to be compatible with modern mores, and applicable to modern times. It’s actually a pretty audacious idea, and lord knows everyone involved seems completely committed to it.

But, man, this feels less like an actual comic and more like the satirical comic that would appear in the background of a Paul Verhoeven movie. I’m going to list a few scenarios about the Flintstones and you go ahead guess which one I made up.

Here’s the thing: some of the jokes are genuinely funny. The satire lands. These creators know what they’re doing. But the cognitive dissonance of them doing it with the Flintstones really kept yanking me out of the story, again and again.

Here’s another line from Fred Flinstone–good ol’ “Yabba dabba doo, I’m on some chewable vitamins!” Fred Flintstone–in response to being asked if he believes in fate: “I don’t know, sir. I was in a war. Good soldiers died. Bad soldiers made it through without a bump. Seems like no one really controls their own fate. Maybe that’s why it’s called fate.”

Over in the DC Universe, they’re doing some kind of linewide event where everyone is sad because the characters from Watchmen made them incrementally angrier, as if that’s some kind of dramatic big deal, and meanwhile, in this other line of books, Fred Flintstone is contemplating the vagaries of fate and the emptiness of war. It is WEIRD. Again, not bad, but super, super weird. 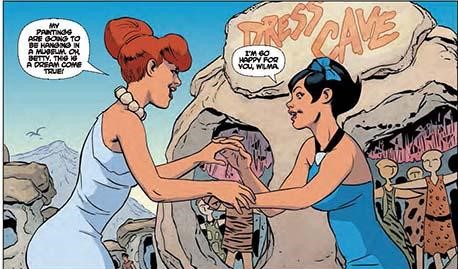 There’s a scene in this book where Fred and (a very attractive Steve Pugh-drawn) Wilma are invited to his boss’s house for a hot tub party. It does NOT turn into a wild, awkward sex romp … but I absolutely, 100% thought it might.

When these books were announced, the general response was “Oh, they’re doing their own Afterlife With Archie.” And the comparison makes sense–kids’ property, dropped into a genre that is decidedly unkids-like. But Afterlife With Archie never gave me the same WTFs. Reading this comic reminded me a bit of reading the first issue of the Tom Scioli/John Barber Transformers v.s G.I. Joe book: the thing that kept going through my head was “Is anyone at the licensor actually reading this thing? How is this even coming out?”

The Flintstones has a ways to go before it reaches the genuine artistic heights of TvsG, but I’m impressed that I’m even mentioning it in the same sentence. This is a book that left me a little amused, a little confused, and definitely intrigued to read the next issue.

4 comments on “The Postmodern Stone-Age Family: Matt on The Flintstones #1”