Looking back over the reviews I’ve written recently, a couple of things stuck out to me:

Since Marvel Unlimited finally uploaded the long-absent first issue of Ellis’s 1995 Starjammers miniseries , I figured I’d return to both those topics in one post. Which you can read, below!

Back when Marvel Unlimited first launched, I kept hearing it pitched as “Netflix for comics”. Given Netflix’s current market role as purveyor of well-regarded original content, it’s easy to forget what that shorthand meant at this time: it meant that Marvel Unlimited was a storehouse of old stuff.

(The metaphor could also have been extended–it was a storehouse of old stuff that was poorly organized, oddly incomplete, and updated sporadically and unpredictably–but I don’t think most people knew that yet.)

That was reason enough for me to test it out. I’ve gotten rid of my old comics more than once, but they used to have a way of coming back–f you wanted to reread old comics, you needed to own them. Which meant you needed to find them, buy them, store them, etc. The idea of being to read some old Marvel comics without the associated clutter and storage nightmare… that was worth exploring, to me.

The service in those days had some hiccups. The app was clunky at best and completely non-responsive at worst. Issues downloaded to read offline regularly and inexplicably deleted themselves without warning. The series in the library, although improved from what I had heard about at launch, were still swiss-cheesed with random missing key issues. The internal tagging was a joke, rendering the search function all but useless.

Still, the promise was there. For a comic reader of a certain age and of a certain sensibility, this was a huge step forward. And, to their credit, Marvel and whatever digital partners they have onboard for the effort have continally refined the app and the product as a whole. Most of the early bugs have been shaken out. Backissues have been steadily added to plug gaps and fill out continuity.

If you want to read nearly full runs of Iron Man comics or Fantastic Four comics or X-Men comics without the tedium of owning them, you can do it now, and if that’s the sort of thing you might want to do, the service is probably worth it for that alone. But the way they’ve been handling new issues makes it really worth of note.

“Current” issues post to Unlimited every week, almost exactly six months after initial release. And this is gamechanging for me. Because it means that Unlimited isn’t just applying the Netflix library model to Marvel Comics, it’s applying the broadcast TV model as well.

One of the reasons I keep trying Agents of S.H.I.E.L.D. even though it spent most of two full seasons being awful is that, frankly, there’s very little reason not to. I don’t have to carve out time to watch it, because it records to DVR and I put it on in the background while I do other things, and it’s not a show that costs me extra money in any way (like, say, ponying up for HBO to see Game of Thrones or whatever).

There is literally no cost to me to keep trying Agents of S.H.I.E.L.D. (aside from the fact that a little bit of my soul dies every time the camera lingers on Clark Gregg smirking knowingly). 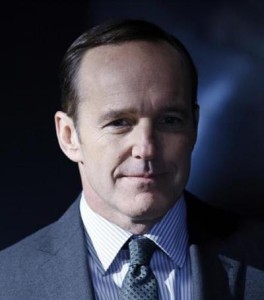 And that’s where Marvel’s comics output has, somewhat inexplicably, wound up. Do I love Inhuman? Not really — as I noted in my review a few weeks back, it’s a perfectly breezy, cromulent comic. But when I have paid nothing for it–or nothing extra, I guess, since I do actually pay for Unlimited–breezy and cromulent is great.

If I had shelled out four bucks, I’d be disappointed; it’s diverting fluff, but nothing that engages me beyond the few minutes when I’m reading it. But thinking of it as a TV show, or like any other piece of web content I consume in the course of a day … I mean, ten minutes of diverting fluff is one of the best possible outcomes.

And money isn’t the only thing I don’t have to expend on the books. The act of acquiring them is totally passive as well–as with TV in the era of DVR and OnDemand. There’s no trip to the store, no pre-order, no thought or effort required at all. The books show up on Monday, and when I get around to it I read what I want.

Not to put too fine a point on it, but this is, to me, the perfect way to consume serial superhero fictions. (And not just superhero, as Marvel is also publishing all of their Star Wars comics through the service. If they, in conjunction with Disney and Lucasfilm, don’t push this service like crazy as a tie-in to the new movie–“Read all the Star Wars comics ever in recorded human history and get new ones every month!”–they’re abject morons.)

There are still ways the service could improve, of course. I’ve been agitating for ages for a shareable “playlist” feature that would allow users to curate and share runs of comics. Search is still not great. I’d love to see Marvel implement something similar to what DC is doing with their digital comic store, where they select older series and upload an issue a week in sequence. (On the other hand, I’d love to see DC do their own version of Unlimited, so it’s not like there are any real winners in this comparison.) There are still loads of inexplicably missing comics, and those holes are still filled in unpredictably. 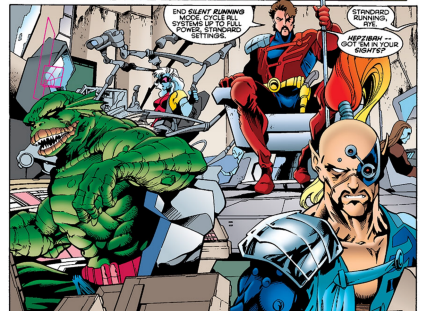 But  when those gaps do get addressed, it can be its own sort of mild delight. For example, the 1995 Starjammers miniseries, written by Warren Ellis with art by Carlos Pacheco. Until last week, Unlimited housed issues #2 through #4 of this four-issue mini. This was impractical, to say the least.

Last week, for no real discernible reason, issue #1 showed up. I was fresh off of reading (and being bored by) Ellis’s new Karnak series, and was wondering if Ellis’s older Marvel work was as much more to my tastes as I remember it being, or if my tastes had just veered away from Ellis’s style. So this seemed like a good chance to figure it out. Here are the results:

1) Yes, I still enjoy Ellis’s older superhero work. That didn’t go away. But looking back at it now, I feel like there’s maybe a heavier editorial hand in the proceedings. There’s more of an effort to hit certain plot beats at certain times, to end the issue with some forward action and/or suspense, to over-dialogue to ensure that plot points are clear. I feel–with no evidence whatsoever! yay, irresponsible speculation!–that modern-day Ellis is afforded a bit more deference from editors. He’s a trusted, experienced comic book writer, so–not unlike Stephen King being allowed to write as long as he wants–it feels to me like maybe his current editors cut him a little more slack. I don’t know. But part of why this Starjammers reads smoother than Karnak is that the older book just feels more like a mainstream comic in terms of pacing, structure, etc.

It’s also notable to me that early Ellis seems more willing to write characters with their established speech patterns. He is very much writing these characters in the same voices Chris Claremont used in developing them. It’s most notable on voices that use busted syntax, like Hepzibah, but even Chris “Don’t Call Me Corsair” Summers ineffably sounds like a (slightly less verbose, slightly less purple) Claremont character. This stands in contrast to much of his recent work, for Marvel and others, where the character tend to speak in one of two or three Ellis Voices.

2) But y’know what else I really enjoy? Carlos Pacheco’s work. Especially in this early period. I love his slightly design-y sensibility that still rests comfortably within the mainstream superhero comic paradigm of the time. He’s got a confident, slashing line that I’ve always enjoyed on superhero books, with a sharp-edged clarity that reminds me of early Paul Smith. (A big chunk of my personal murderers row of 90s-or-later superhero artists comes from the stretch of the Mark Waid Flash run that had art from Pacheco, Mike Wieringo, Salvador Larroca, and Oscar Jiminez, with Humberto Ramos over on Impulse. So this early Pacheco work is right in my wheelhouse.) He handles the space battles well, makes the aliens look suitably alien, but also never sacrifices clarity for style. It’s an easy-to-read story.

3) In fact, it’s a story that holds up really well two decades later. It’s a self-contained, continuity-lite story. There are some elements that tie in to what Ellis would be doing over in his Excalibur run, but it doesn’t matter if you know that at all. The Shi’ar and Kree empires both allude a bit to past Marvel history, but not in any way that requires you to actually know anything. The characters are cleanly and swiftly drawn, alliances are sketched quickly, and the art (as noted above) isn’t going to be barrier to even the most casual reader. If Marvel Unlimited is Netflix for Marvel Comics, this is one of those books that’s like finding Looper for the first time on a can’t-sleep-let’s-pick-something-random Netflix session. If only it hadn’t taken them three inexplicable years to upload the first issue, I would’ve been able to recommend it much sooner.

4) And it’s not bad space opera, either. Despite my assertion in #1 above, this isn’t really superhero work. This is Ellis doing his version of some Star Trek or Battlestar Galactica tropes, years before his more overt parody/homage/satire of them in Switchblade Honey, and it works really well. He gets to indulge the side of him that likes science-y stuff, but never lets the infodumps overwhelm the plot. And the various traps and perils the crew find themselves in all flow naturally from the narrative, and the escapes are all cleanly set up and well-executed.

Basically, it’s a really good episode of an imaginary superhero/space-opera TV show, which makes it an optimal thing to stumble across on the Netflix of Marvel Comics. 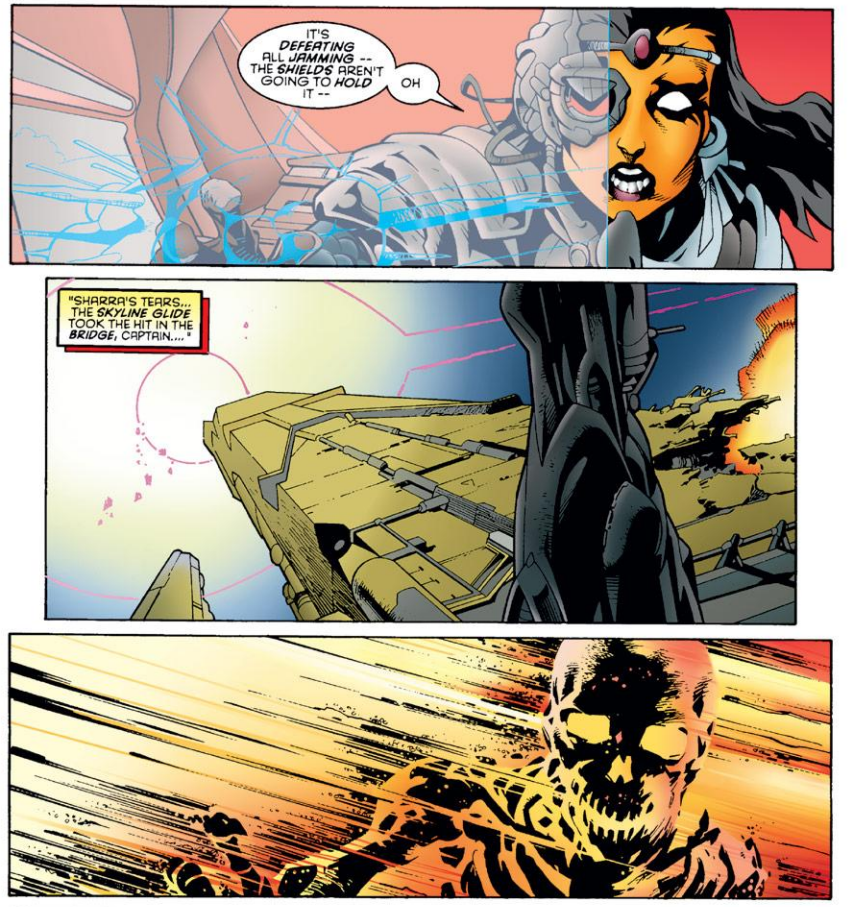 2 comments on “Marvel Unlimited and Chill: Matt Rambles About Netflix-For-Comics and an Old Warren Ellis Book”