Donald Trump reminds me of this Fred Armisen character who can’t finish a single sentence pic.twitter.com/hlV3cL2RmW

And as a bonus pick for Jeff, here’s a picture of Randy Quaid: 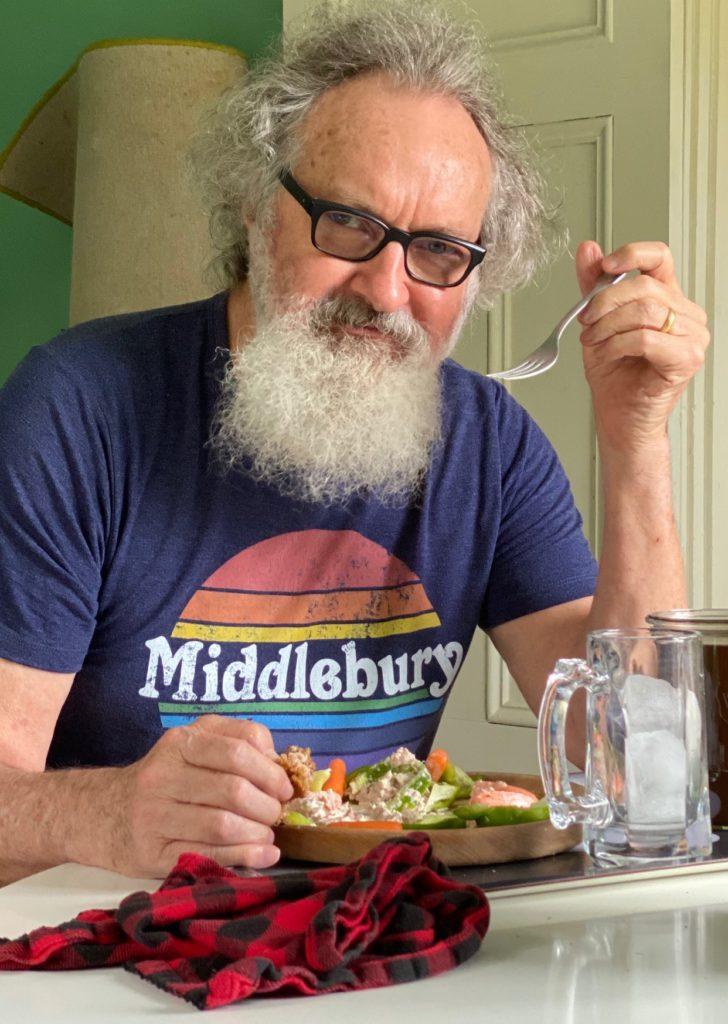 And with all that said, here’s the episode!
0:01-28:07: Greetings from Episode 300!  We get right into it with exactly what people expect from a big landmark number like that—nostalgia, self-aggrandizement, and a sheepish acknowledgment that our numbering system is hilariously askew.  Also discussed: Battlestar Galactica! Smashing Pumpkins! The Batman Quadrology and related relationship (and music) confessions!
28:07-41:19: Three Questions from Galactic Protector Dominic L. Franco!  Question 1: Since you both at one time worked in retail comics, I wanted to ask your opinion about why comics don’t fully transition to the graphic novel format.  Floppies made a lot of sense when they were relatively cheap and when the only market was the direct market or the newsstand.  But now, there are bookstores and Amazon, Comixology, and even those direct market stores that all do their business off of trades and graphic novels.  When publishers are asking $9.99 for a “giant, special” issue, is cost really the boogeyman some would make it out to be.  Floppies also made a lot of sense when every floppy was a self-contained story.  But now, so many issues are just “writing for the trade”, why not cut out the middle portion and just put out the trade?  Is it because trades/graphic novels cost so much up front for something you don’t know anything about?  How is that any different from the hundreds of hardcover novels that get put out and picked up every year?  Are publishers worried about the upfront cost?  Again, why is that so different from the book market and the publishers that work there.  Every book publisher knows what authors will be bankable (in the short term) and what authors will be a risk or a possible loss; Marvel knows what kind of numbers a Mark Waid book is going to post; DC knows that Geoff Johns is going to cover the cost of putting his work out.  I just wanted to know your thoughts about transitioning fully to the trade format — arguments for and against.  I apologize if this feels like a subject that was covered before.
41:19-57:48:  Question 2! Why does Superman not seem to work anymore in pop culture at large?  Batman is thought of as “so cool”, has multiple cartoons and multiple movies that have worked and reworked his concept.  Superman is thought of as “everyone’s dad” but that’s just shorthand for saying he is old-fashioned and corny.  He’s put into films that play up the fact that he is an alien (not one of us), or that make him more violent and less heroic (in the try to save as many people as possible sense — “we can’t fight here — the people!”).  Even in the comics, different attempts are made to chip away at him — to give him angst or pathos.  Why can he not seem to work as the inspirational figure he is meant to be?  Why is his ethic of wanting to do good simply for the sake of doing good (because it is the right thing) sneered at?  Did we let Superman down or was he always just something for children?  I ask this as a Superman enthusiast and am just curious as to what kind of discussion this may stir.
57:48-1:02:55:  Question 3! You know I’ve tried to solicit from the both of you Wait, What? the Soundtrack.  Now I want to ask about Wait, What? the Movie: Jeff, in your opinion, who plays you and who plays Graeme?  Graeme, same question.

1:02:55-1:24:57: This was a long time coming!  Kevin Donlan asked: So…on the last Q&A (Ep 273) I had asked a question that got pushed because it was a bit deeper than time allowed, I’m still curious about your thoughts, especially with how the world has gone slightly more than sideways since then. If you were to recommend an introduction to comics to different age levels what would you recommend. I had put a bunch of age brackets in the question last time, but how about 10 and under, 11-15, 16-20, 21-30 and 31+. I know it’s kind of a hard question since you don’t know anything about the target audience other than age, but I think you are up to the challenge. Thanks for the podcast, I appreciate what you guys share with us.
1:24:57-1:38:08:  Michael Loughlin performs a flawless victory combo! On the last episode, you discussed the recent Lois Lane mini series, and that Superman explaining why he wouldn’t help immigrants imprisoned by the government was weak and didn’t fit his character. I’ve long maintained that bringing in too many real-world elements breaks Big 2 super-heroes.
Do you agree?
Should we see super-heroes solve real world problems in the pages of their comics, or does that cheapen real world problems?
Is it better to see super-heroes deal with an analogue to the real world problem? (e.g. “President  Universo is detaining undocumented Durlans on Takron-Galtos and using the Science Police to attack protesters! It’s up to the Legion of Superheroes to free the unjustly-imprisoned Durlans, but can Element Lad convince Officer Erin to stand up to his fellow officers?”) (why yes, I have been reading a ton of Legion lately, how did you know?)
Not counting out-of-continuity/alternate reality series like Watchmen or Squadron Supreme, can you think of a Big 2 super-hero comic that addressed real world concerns that was exceptionally good?
1:38:08-1:51:13:  David Austin inquires:  Question for podcast 300: I rarely hear you guys talk about eurocomics/Bandes dessinee compared to American, British, or Japanese comics, even though they’ve become a lot more accessible thanks to ComiXology, Titan, and other distribution mechanisms. Curious if you have some favorites or recent picks (I enjoyed the Elric adaptation from a few years ago). Also curious whether you think European genre comics – fantasy, sci-fi, crime, etc. – are smarter or more sophisticated on average than American genre comics, or do they just tend to present as such because of more sophisticated visuals and more “adult” themes?
1:51:13-2:04:30: Steven Bagatourian descended into the underworld to save his beloved and returned with this:  Speaking of desperate and dying, let’s talk about the state of mainstream comics! More specifically: the price of mainstream comics.
When I started reading comic books, they cost 65 cents at my local Circle K. Today, we live in the land of the $3.99 and $4.99 comic book — price points that are wildly out of whack with the cost of inflation and the cost of minimum wage in this country. No matter what index you choose, comic book prices are just insane and seem to doom this medium to cultural obscurity, particularly now, with the present economic horror show we’re living through. I realize the readership is shrinking dramatically, but to me, clearly, these absurdly escalating price points are a huge reason why this has happened — not the only reason, to be sure, but a pretty fucking big one.
Is the paper floppy really a dead format (NOOOOOOOOOOO!)? Would $2 floppies sell substantially higher than their $4 counterparts, enough to justify the price-drop? (I say “Yes” to that last one — at least, I would take a chance on a whole lot more books at two bucks.) Are we destined for comic book magazines in America that combine multiple issues in phonebook-style manga magazines?
2:04:30-2:07:16:  HEEEEEEEEEERE’S Ethan Johnson! What is DC doing?  It seems like a bunch of titles are “wrapping up” in a month or so.  Is this the “5G Reboot” thing, or is that off the schedule because of COVID and DiDio’s departure?
2:07:16-2:26:46:  Telegram from Tim Rifenburg!   Hey Guys, I already sent a question through Patreon but if you are feeling kind, here is a quick one. Favorite Anniversary Comic? (100th, 500th, 25th etc.) Mine is JLA 200.A fun throwback to early JLA with Gerry Conway, George Perez and a bunch of short chapters with classic team up / slugfest by a jam of artists.
2:16:54-2:26:46:  Podcast Protector and Comic Book Champion Adam Knave (whose name I think I talked over when Graeme said it? Sorry, Adam!!):  3 part question though, in honor or the 3-0-0 –
What is the GREATEST Avengers run?
What is the GREATEST JLA run?
Between the two – which is better than the other?
2:18:38-2:26:46:  We are always grateful to hear from Dan Billings—sorry we truncated your comments down to just the question, Dan!—who ponders:  What would you recommend to feel good about comics?

While talking to my wife about Christopher Nolan’s movies, she said that she much preferred “the Buster Keaton Batmans” and reader I am still recovering.

2:26:46-2:29:04: That imp CJ Kral inquires:  Would you rather see a 1920’s silent Batman film staring Buster Keaton or Spider-man staring Charlie Chaplin?  Super-exciting question for Jeff on so many levels!  It’s a reference to one of his tweets!  He gets to explain the joke to Graeme!  And his answer makes Graeme reconsider his.  WE HAVE A HAT TRICK, LADIES AND GENTLEMEN
2:29:04-2:35:51: It’s the Flasshe of Two Worlds!  Roger Winston powers up the cosmic treadmill to ask:
Question 1: If DC’s 5G initiative had actually gone forward and was as rumored (legacies replacing originals), is that something you would’ve been in favor of? And for how long? I think I would’ve been okay with it, but for like 2 years max.
2:35:51-2:41:46:  Question 2: Is the pandemic NOT really going to be the nail in the coffin of the comics industry, or at least the direct market? I was sure it was, but now I’m wavering.
2:41:46-2:46:52: Question 3 (I guess he’s the Flasshe of Three Worlds?):   Has quarantining / self-isolating changed your eating habits for the better or worse or not at all? I am eating less, but also probably less nutritiously, and losing weight but not the “bad” weight since there is also less exercise.
2:46:52-2:50:00: And jumping the queue is Chad Nevett for our final question of the episode: which of you is which from below?  Robert Secundus quote: “Oh you two have a podcast? Which is the scholar and which is the clown?”
2:50:00-end:  Closing comments!  Look for us on  Stitcher! Itunes! Instagram! Twitter together and separately: Graeme and Jeff! Tumblr, and  on Patreon where a wonderful group of people make this all possible, including Dominic L. Franco, and Empress Audrey, Queen of the Galaxy, to whom we are especially grateful for her continuing support of this podcast.  (Also, don’t forget about Spotify!)
Next week: It was supposed to be a Drokk! but it instead is going to be the wrap-up of answering your questions! Woo, another longstanding Wait, What tradition survives!