A hastily-written grab bag of reviews! Of things you wanted me (Graeme, because as pointed out in the comments, that’s not immediately obvious)  to write about, Whatnauts! You only have yourself to blame!

For people coming here to listen to the latest episode of the podcast: Scroll down one entry! It’s right there!

Dead Letters #3: I feel guilty falling out of interest with this book more and more with each successive issue, but I can’t deny that’s what’s happening. The problem is, I think, that Chris Sebela’s over-writing it for my tastes — not only does it feel like a book that’s literally just overly verbose, but the twists and turns don’t feel organic or even that interesting, but instead the result of self-consciousness and the idea that they’re born of responding to expectations instead of what would be best for the story itself. What’s keeping me around is Chris Visions’ art, which remains as wonderfully loose as the story is over tight, but without some kind of turnaround in the writing, I don’t think it’s going to be keeping me around much longer. 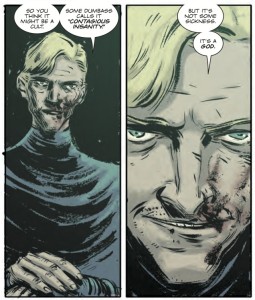 Oh, that’s not creepy at all.

The Empty Man #1: I’m not quite sure why this reminded me so strongly of The Following, the Fox series — perhaps it was the cult overtones? — but it was a parallel I didn’t manage to shake all throughout the book, right up to the final page (which reveals that this is definitely more of a horror book than the increasingly-shitty thriller procedural of the Fox show). It’s a shame, I think; there’s more going on here — and things that are far more interesting, as well — than my unfair sense of deja vu allowed me to fully appreciate, but not enough of them to properly get me over that feeling that I’d seen it before somewhere. Cullen Bunn piles on the foreboding in his script, but eschews any real meat, frustratingly, while Vanessa del Rey offers up art that’s appealing scratchy but somewhat unclear at key moments, all of which adds up to something that’s promising but nowhere near satisfying yet… and given what’s happened to fellow Boom! launch Dead Letters, that’s not amazingly reassuring right now.

The Woods #2: And talking of unconvincing Boom! launches, the second issue of this feels like James Tynion IV read Morning Glories and thought “Wait, what if I mixed that with the “kidnapped to an alien planet!” conceit from Secret Wars even moreso than the first issue. There’s nothing particularly wrong or bad with this series to date, but there’s also nothing particularly compelling or original about it, either (Unlike Dead Letters and Empty Man, the art by Michael Dialynas is… functional but not stylish enough to distract from the writing’s shortcomings), which feels like a problem these days. There really is just too much to read otherwise to keep going with this, it seems.

(A random thought: All of these books feel like they could benefit from being 2000AD-ized. Not just in the sense that they could all use the tightening up that a five-six page episode structure would bring — but, oh man, would they — but also that there’s something about the variety of an anthology that I could imagine each of these stories thriving in. Individually, there books range from “Okay, I guess” to “I’ll probably pick up the next issue, it’s pretty good, maybe?” — but if they were combined, there’d be a nice sci-fi horror package that might feel more rounded and paper over the cracks in each of the individual strips.)

The Amazing Spider-Man: Family Business/X-Men: No More Humans: So, we’re three releases into Marvel’s Original Graphic Novel program, and so far, it’s been pretty underwhelming. While these two books are better than the weak Avengers: Endless Wartime — a project that felt as if neither Warren Ellis and Mike McKone were particularly engaged with the task at hand — both of them tell stories that are surprisingly slight on all levels. Not only do both plots basically have a “LOOK A BIG CHANGE IN THE STATUS QUO OH ONLY JOKING NOT REALLY” construction (In fact, both also offer a big change in the status quo that seems so dramatic as to be obviously unsustainable, making both books feel like they’re just killing time before their own retcon), but both books manage to avoid using the temporary change in the fictional characters’ worlds to say anything new, insightful or interesting about their titular characters. The end result of both books, then, is something that feels worryingly close to filler for some reason — material that, at another time, would be used as an annual that would’ve cost a quarter of the price and been better suited as a result. 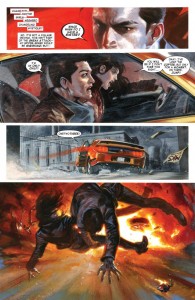 Of the two books, the Spider-Man graphic novel is significantly better than No More Humans; Mark Waid and James Robinson have a good handle on Peter Parker’s voice, even if the book then makes a point of taking the character out of his traditional environment (and narrative aesthetic) to drop him into a spy story with his newly-discovered sister. The art by Werther Dell’edera and Gabriele Dell’Otto is a mixed bag; at times, it works really well and has a nice heft to it, but there’s something about painted artwork and Spider-Man that never works for me — it feels too slow, too ponderous for the character, if that makes sense.

X-Men: No More Humans, on the other hand, looks and feels very much like a regular X-Men book, with Salvador Larroca and Justin Ponsor providing line-art and color respectively. It reads like one, too, thanks to Mike Carey providing a script which manages to feel at once bogged down in continuity and off-putting to newcomers all at once. Seriously, if someone who didn’t read comics came out of X-Men: Days of Future Past and picked this up in the store, they’d deserve an award if they didn’t find this mess of characters — most of whom lack any real introduction or explanation — so confusing that they gave up and went off to read something else instead.

That adherence to current comic book continuity is both books undoing, ultimately; even Amazing Spider-Man: Family Business relies on past continuity in the choice and actions of its villains, and as such, neither are truly successful as introductions to new readers — and ensuring that nothing of note happens in each book, so as to not penalize regular readers of the ongoing titles who might not have the $25 to pick these up as well, robs each book of having any kind of complete or coherent character arc for anyone involved. This shouldn’t come as too much of a surprise, of course; it’s how Marvel works these days and has been the case for years now. But it would’ve been nice to think that some kind of solution could’ve been worked out in order to earn the price tag and format.

Maybe the Thanos OGN will offer something special. Who knows…?

9 comments on “Because You Demanded It (Well, Demand May Be A Little Strong, Perhaps)”