Because I missed out last week’s written post (Sorry, all! Life happened), you’re getting multiple posts from me this week. But if you haven’t listened to the most recent episode of the podcast, stop reading this, scroll down and do so right now. No, really.

Re-reading Crisis on Infinite Earths this weekend, it struck me what an odd position that comic used to hold for DC Comics as a publisher.

These days, of course, it’s a proud part of the company’s history — in fact, by being a minor plot point in The Multiversity, Convergence and Justice League in the last year alone, it’s arguably more integral than ever. (Even if, in Convergence‘s case, quite what is going on with regards to Crisis remains a mystery months after the series ended. It was… undone? Maybe? Possibly?) It’s also been collected in at least four separate editions in the last decade and a half, including three different hardcover editions. (The version I read this time around was the “deluxe edition,” an oversize hardcover that, nicely, also contains Wolfman and Perez’s History of the DC Universe follow-up that was official canon pretty much for about the month it was published before being contradicted.) It’s a well-respected part of the DC library.

Thing is, that wasn’t always the case.

Given the title’s importance not just to DC as a fictional meta-narrative — it’s the series that literally brought (almost) everything the company had ever published into line with itself before hitting the do-over button on it all — but superhero comics as a genre, it’s genuinely surprising to realize that Crisis went uncollected for thirteen years following its completion, and when the first collection was announced, it was a limited-edition hardcover that would “never be reprinted” because the company wasn’t sure that it had longterm appeal. 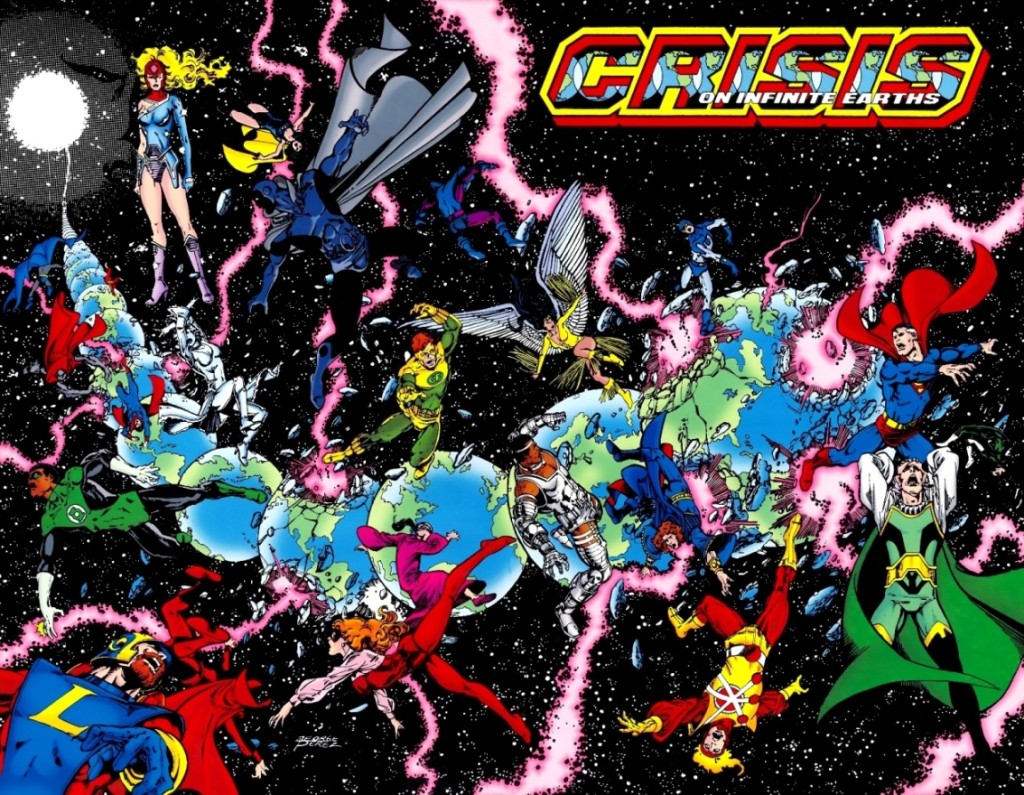 (I bought the $99 hardcover, back in 1999; I fell for the hype. Not the hype that it was worth that much money, I should add, but the hype that it wouldn’t be reprinted. What can I say? I was stupid, and apparently had far too much money; I remember being genuinely nervous spending that amount on a book at the time, and telling myself that I’d have to read it slowly to properly get my money’s worth. Two years later, I’d given it away like the rest of my collection when I moved to the U.S.)

Moreover, the story of Crisis was a void in DC’s own mythology. Part of the conceit of the series, after all, was that it would re-write DC’s history to make it impossible for Crisis to happen in the new version of events: if you say that there’s never been a multiverse, then how can there be a story where a bad guy is erasing alternate earths and re-writing history so that there’s never been a multiverse? And yet, according to DC’s new history something like Crisis happened that resulted in the death of Barry Allen, but quite what that was, was left frustratingly vague. It was really important, definitely. It’s just that no-one could explain it.

And that almost, but not quite aspect to the company’s history echoed throughout the line for decades; Grant Morrison and Mike Parobeck took to redoing “The Flash of Two Worlds,” but this time it wasn’t that Jay Garrick was on another Earth, but that Keystone City as a whole had been vibrationally shifted out of reality. Morrison (again!) and Frank Quitely reintroduced the Crime Syndicate of America as the Earth from the Anti-Matter Universe, because, sure, why not. Post-Man of Steel (the Byrne comic, not the movie), the Legion of Super-Heroes were revealed to have been inspired by a Superboy that was a fictional construct in a pocket dimension, because otherwise, that whole franchise was shot to hell.

There were all these workarounds created to explain away this thing that was intended to make everything far simpler than it had been, and the story itself was, for a decade and a half, lost to the back issue bins; Zero Hour, which was essentially Crisis II: This Time It’s On Fast Forward And Kind Of Crap, got published and collected before Crisis was given a quasi-permanent edition. Because of this, Crisis on Infinite Earths stopped being the things that it actually was — a comic book series that attempted to refashion the DC Universe to streamline it and make it easier for readers to come onboard — and started becoming defined by its absence; it became a void at the center of things for DC as a whole for an entire generation of readers: a secret origin of the DC universe itself.

Which was a problem, because even now, it makes it hard to see Crisis on Infinite Earths for what it actually is. But I’ll get to that next.

5 comments on “Canons Will Live, Canons Will Die: Graeme on Crisis on Infinite Earths, Part 1”