And so we return for the final part of my traipse through DC’s Crisis on Infinite Earths. I’ll shut up after this, honest.

The problem with the second and third installments of what I’ve come to think of as DC’s Crisis Trilogy — well, one of the problems, at least — is that while both learned from the example of Crisis on Infinite Earths, there’s an argument to be made that neither actually managed to learn the right lessons. 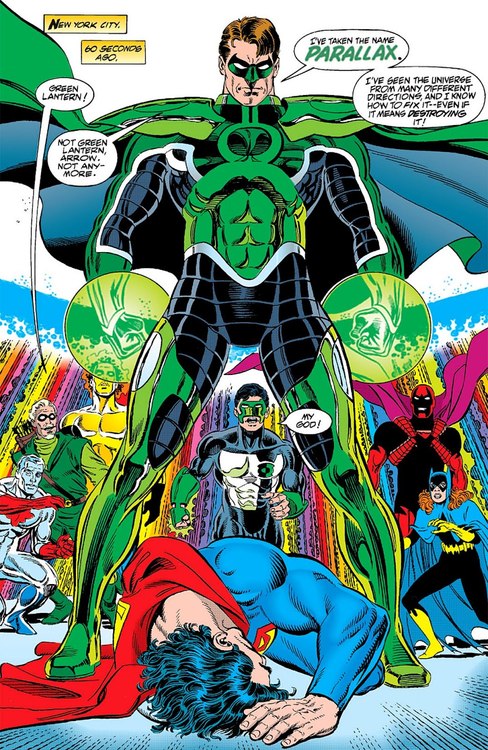 Take 1994’s Zero Hour: Crisis In Time!, for example. Yes, the exclamation point is really part of the title; it’s right there in the logo. As much an admission that Crisis had not only utterly failed to simplify DC’s superhero mythology, but actually made the problem even worse as anything else — why else create a five issue series with that very purpose less than a decade later? — the series, by the team of Dan Jurgens and Jerry Ordway, apes the breathless melodrama and spectacle of Wolfman and Perez’s series but lacks both its heart and its common sense.

Things just happen in Zero Hour; there’s none of the attempts that the original Crisis did to be self-contained or try to explain itself away. Who is the villain who it seems is trying to destroy time itself? Oh, he’s a former hero turned villain from Armageddon 2001 that then changed his name and look in two issues of Showcase 94, but neither will be referenced here. Who’s Extant and why does he look like Hal Jordan? Hope you read Emerald Twilight, fanboy. And so on, and so on. Why try to give context or motivation when you can have the Justice Society die of old age because they’re old, like losers?

(There is something to be made of the fact that Wolfman purposefully didn’t kill off characters that were older than his career, with the exceptions of those who had younger versions waiting in the wings to take over, but Jurgens happily offs the majority of the JSA with haste. I just don’t know what.)

I’m being too cruel, to be honest. Jurgens tries to bring a sense of personal stakes (and personality) to the series in its final two issues, with Green Arrow distraught to see his best friend so corrupted by ultimate power, and Batgirl struggling to deal with the idea that she’s merely a time anomaly. But it’s too little, too late, and a poor attempt in a series that already far too busy and overstuffed at just five issues.

The same can’t be said of Infinite Crisis, in which Geoff Johns, Phil Jimenez, George Perez, Jerry Ordway and Ivan Reis — man, did that book get late, judging by the number of artists responsible for the latter issues — diagnose a problem of cynicism and apathy at the heart of the DCU by creating one of the most cynical responses DCU comic books ever. Unrelatedly, man, is the pacing of this book really slow.

Whereas Zero Hour seemingly lacked any deeper purpose beyond “fix Hawkman” and “make a lot of noise,” Infinite Crisis lays out its agenda in its first issue: Superman is too inactive and unable to lead by example, Wonder Woman too scary, and Batman too paranoid. Oh, and the heroes who escaped to a Happily Ever After at the end of the original Crisis are very disappointed with everyone, thank you very much.

In terms of emotional throughlines, there’s a lot in Infinite Crisis to appreciate or, at least, chew on, but with the exception of the Batman thread, none of them really pay off in any satisfying manner — Superman learns to punch things! Yay? Wonder Woman… actually, I have no idea what her emotional journey is actually supposed to be, but she really had the worst time of all the icons in the story — and, in attempting to build in a surprise villain of the piece, Johns et al manage to (accidentally?) piss all over the original Crisis‘ optimism: hey, remember that Superboy from the old Earth-Prime and the Lex Luthor who was a good guy? They’re both evil, just because. 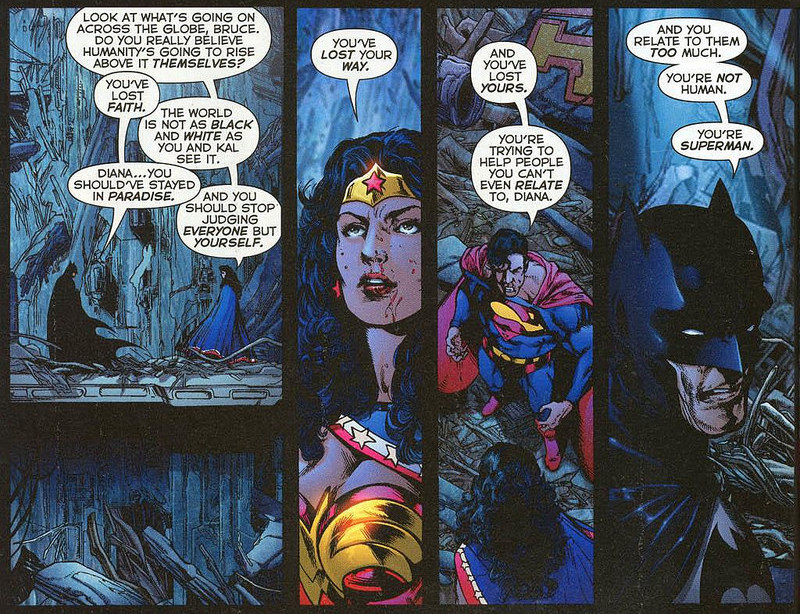 And the whole thing is inexplicably complicated, as well — even if you go with the “Alex Luthor has been manipulating events for months” theory of events, why did he cause an intergalactic war between Rann and Thanagar? What was with him forming the (basically unused) Secret Society of Super-Villains? Why is magic suddenly falling apart? What purpose does the whole OMAC Project plot actually serve to the greater story?

All of which isn’t to suggest that Infinite Crisis has no saving graces — overlooking Geoff Johns’ love for ripped-off arms, the body count is surprisingly low for an event like this (in part, I suspect, to make Connor Kent’s death land the way it does), and I genuinely appreciate the attempt to acknowledge the aspirational failure of the main heroes, even if it goes nowhere after that — but, again, it’s a comic that’s at least as flawed as it is successful in its aims. It suggests the scope of Crisis on Infinite Earths on numerous occasions, but in the same way that Oasis suggested the scope of the Beatles. Which is nice enough if you’re in the mood for it, but otherwise, not so much.

There are, I’m sure, those out there wondering why Final Crisis isn’t part of the Crisis continuum in my head, but despite its title, it feels too separate to belong; unlike Infinite Crisis, it doesn’t share a cast with the Wolfman/Perez series, and unlike Zero Hour, it isn’t a retread. But with the current Darkseid War storyline in Justice League, I do wonder if DC is ramping up for a fourth installment in the series ahead of whatever “Rebirth” ends up being — we have the Anti-Monitor showing up and an explicit reference to the original in the prologue.

If there really is going to be more Crisis in our future, it’d be nice to think that the quieter lessons of the original will have been learned this time around. But, really, how likely is that?

5 comments on “But What About The Children?: Graeme on Crisis on Infinite Earths, Part 3”