As Convergence rolls into its third week, things begin to get a little… stranger. The third week’s issues are, technically, set in pre-Crisis on Infinite Earths continuity, but what that actually means is something that’s best left unexplored, I think. Suffice to say, when both Superboy and Superman are shown to be trapped under the dome (Technically, different domes, seeing as one has 30th century Metropolis, and another 20th century Gotham), things get complicated. Both are Pre-Crisis Superman, except they’re different characters and yet…?!? More, as ever, under the break.

Unlike previous weeks, there was less of an attempt to stay faithful to the tone of the eras in which that week’s programming was set; when Marv Wolfman used thought balloons in Adventures of Superman, it seemed as incongruous with the other books as the pages of expeditionary flashback Len Wein employed in Swamp Thing (A book that took the Crisis mention far more literally than any other issue of the week, going so far as to bring in red skies as a Macguffin). Really, this was a week of… perhaps not revisionist takes on the era, per se, but definitely a distanced recreation of a time that’s gone, instead of an attempt to reclaim old glories. 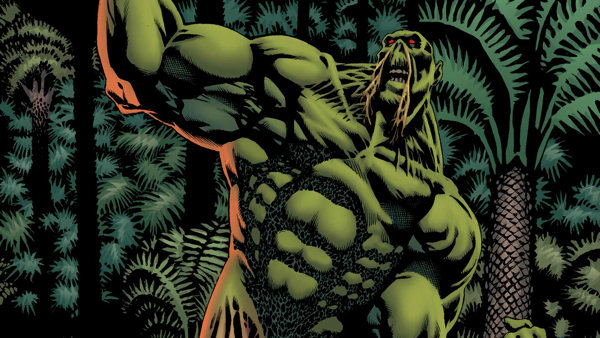 For one thing, the sense of optimism that was threaded through most of the pre-Crisis material is absent, replaced by a sense of foreboding and dread — something that might be appropriate given the concept of Convergence, perhaps, but feels at odds with the comics these issues are ostensibly continuations of. Wouldn’t the pre-Crisis heroes have taken that particular lemon and decided to turn it into crime fighting lemonade, instead of pouting and complaining?

Some of the books in week three show that kind of thing happening: Wolfman’s Adventures of Superman sees Supes and Supergirl venture into the Phantom Zone to try and find a way out of the dome, and Fabian Nicieza and Chris Cross’s genuinely great Justice League of America reveals that the members of the Detroit-era team have been helping out in non-super ways since losing their powers. Similarly, Jeff Parker and Tim Truman’s Hawkman is suitably upbeat, if a little frazzled; a really nice combination, all things considered.

That’s not to complain about the books where the heroes are a little more fragile; Green Lantern Corps might offer a completely cracked Hal Jordan, but as a Guy Gardner book in all but name, that actually works really well. Larry Hama and Joshua Middleton’s Wonder Woman is also oddly brittle, but it works in context of the story being told, with Middleton’s art being the highlight even if his Diana herself seems off for some reason. (It’s a week for good art; Kelley Jones’ Swamp Thing also looks great, and Gus Storms’ Superboy and the Legion of Super-Heroes also works well.) 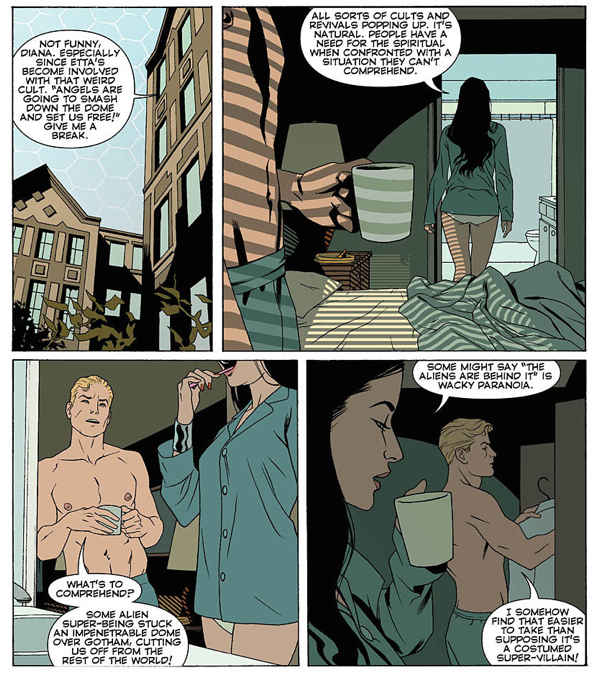 While the third week of books shares a lot of the continuity problems with Convergence Week 1 — really, there’s all manner of internal inconsistencies that can’t be reconciled, including Batman being in two different places at once when the dome comes down, which also happens at two different times of day — it’s actually much closer to the second week in terms of overall quality; there are fewer standout books (JLA and Wonder Woman are the best, I think), but everything’s pretty good. Only Superboy and the Legion, New Teen Titans and Batman and the Outsiders feel flat.

By this point, the event is beginning to feel like something that is unlikely to inspire any new fans, but will also manage to satisfy many old ones. The main Convergence series falls under the same description for me; I’m surprised by how much I’ve come to enjoy what is ultimately a very old-fashioned superhero story where everyone panics and reacts without much rhyme or reason. It’s about two steps away from everyone lining up in a panel at some point in the beginning of each issue to say each other’s names in bold type during an awkward conversation, and I mean that as a compliment.

That’s almost certainly not the reaction DC executives were hoping for — I think they were closer to what are all these new versions of these characters, I must buy some collected editions and back issues immediately in terms of desired responses from fans who didn’t read the original comics that inspired the event — but, considering this whole thing is pretty much a two-month fill-in, it still feels like a win to me. New readers will come back in June when everything relaunches one more time, right…? Right…?