This should be a review but it’s not.  It’s really more of a rant.

I’m not cheap.  I’m not.  I’m quick to pick up the check, I like buying presents for people.  I like spending money—probably too much so—and I’m still down with the idea of using my money as a form of activism, whether that means buying books I believe in and giving them as gifts, or donating small amounts of money, or microloans through Kiva.  All that.

But I also appreciate a good deal and like saving money.  So allow me to give you an opportunity on a tremendous comics deal trembling quietly under your very nose…and while doing so, also grouse about my complete confusion about what the fuck DC Digital is doing.

When DC started digitally publishing Batman: The Jiro Kuwata Batmanga, I was in from the first issue.  In fact, I was so delighted paying ninety-nine cents for the first 34 page installment of Batman’s fight with Lord Death Man  (Lord Death Man!) that I signed up for a digital subscription via Comixology.

Of course, the next week wasn’t 34 pages for ninety-nine cents.  It was fifteen pages for a dollar ninety-nine.  As was the next.  And the next.  In my brain, I changed gears a little bit and part of me decided there was more than a little bit of consumerist activism in keeping my subscription.  Well, getting this stuff restored isn’t cheap, I figured, and there probably aren’t that many people buying the digital copies so the price I’m paying is help underwriting the project.

If you listen to the podcast, you know I’ve gibbered happily about the stuff Kuwata is doing here:  it’s great goofy Batman comics, stuff that looks like the “New Look” Batman from the ’60s but reads more like the wacky sci-fi Batman stories from the ’50s.  I mean, my favorite story here has a supervillain named Professor Gorilla who is indeed a gorilla with the intelligence of a professor.  He uses his new found genius to punish humanity for its cruel treatment of animals.  He’s kind of R’as Al Ghul crossed with Gorilla Grodd, except he also wears a cape and mask like a wrestler in a lucha libre.  I love Professor Gorilla with a passion that borders on the terrifying. 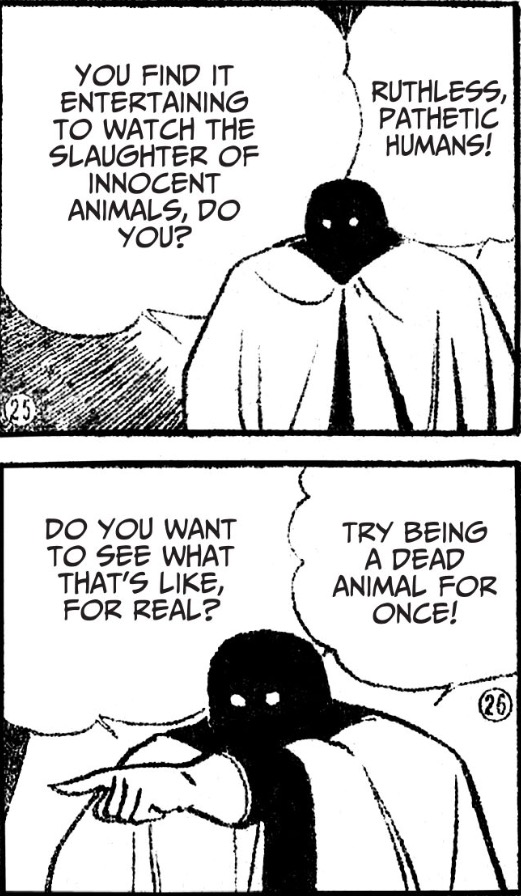 So about twenty minutes ago, when I started this post, I was going to tell you, “hey, good news, the first collection of Batmanga is in print and you should get it because it’s a fantastic deal.” 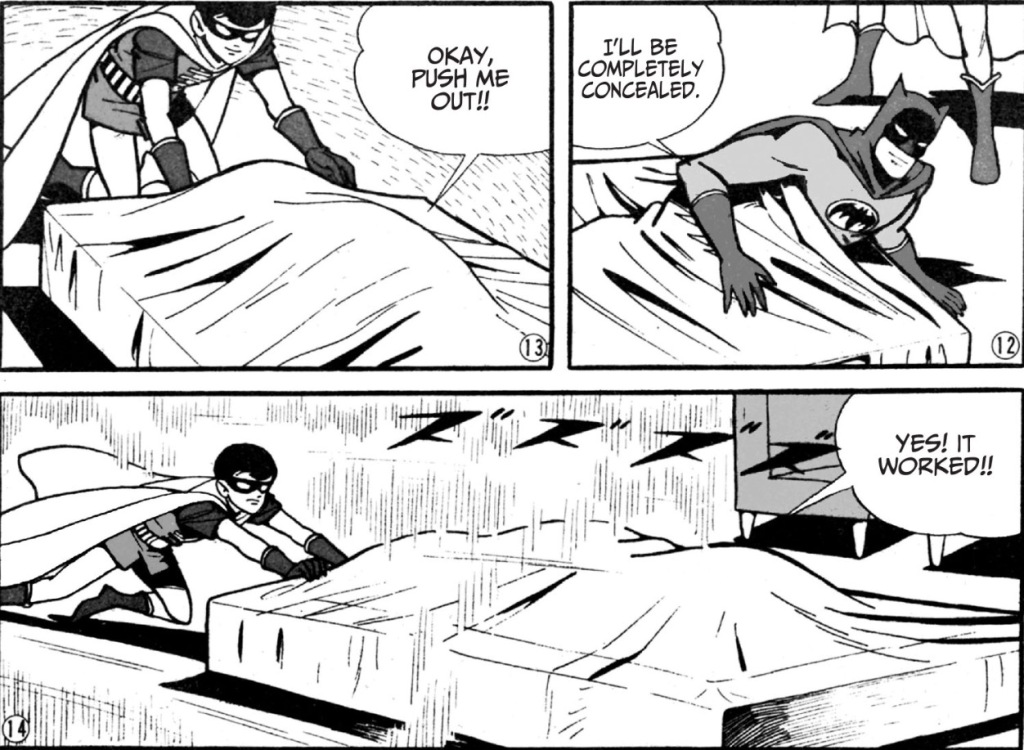 Best escape from a death trap EVER.

And, don’t get me wrong, it is a really good deal.  It has the first six stories (or nineteen issues) for $14.99 in a well-designed trade paperback.  Seriously, 357 pages for a hair under fifteen bucks!

And then I thought about it and broke out the calculator and did the math.

Let’s take the glass half-full approach:  I got to read all this material on a weekly basis starting five months ago.  I didn’t have to go to a comic store for it; in fact I usually downloaded it on Friday night so I could read on my lunch break on Saturday, and all nineteen issues take up the same slot of space on a device about as thick as a slice of bread.

But you know what? If DC Digital had charged me ninety-nine cents an issue, I would’ve paid $18.81.  And while that would’ve saved me a lot of money, it would’ve still been more than the $14.99 they’re charging for the trade paperback.  As you know, the trade has a lot more hidden costs behind it: there’s printing costs, distribution costs, the costs of returns for the book in the bookstore market.  Somebody got paid to design the dress.  And if you buy this book on Amazon, you don’t even pay $14.99, you pay 12.99

for the paperback because Amazon is willing to work on a lower profit margin than your local comic book store.

And here’s where it gets weird, stupid, and kind of offensive: you can also buy this volume as a Kindle edition for $9.99

So let’s look at that glass half-full approach again.  The only advantage I now have for my extra twenty-five dollars is that I got to read the material on a weekly basis starting five months ago.  I suppose if I divide twenty-five by five, that’s five dollars a month extra or a little over $1.25 an installment?  That’s really not so bad, is it?

I know I’ve bitched about this before but I feel the topic merits revisiting:  is DC’s Digital program an attempt to develop and test a new marketplace, or is it a big ol’ cash grab?

Seriously, DC:  now that you have a digital collection where every installment is basically sixty-three cents, why don’t you adjust the prices of the individual issues to ninety-nine cents to encourage more new readers to experiment, or for people who enjoyed the trade to gift issues?  Assuming you’ve made your nut enough to offer a print edition, with all the additional cost that entails, for something like seventy-eight cents an installment, what exactly are you accomplishing by continuing to offer eighteen of the first nineteen installments for $1.99? There’s not even the advantage now of being the first on the block to read it so what exactly is the reason for the price, apart from the idea you can fleece a mark who doesn’t know about the trade?  And even if that’s not the reason, you can see how it looks like that, right?  And what kind of consumer relationship do you think you build looking like that?

Anyway, that was to DC.  This is to you:  look, do you like Batman?  Goofy, pre-grim Batman with weird and occasionally really lame villians?  Then do yourself a favor: if you have a tablet, pick up the digital collection for super-cheap.  If you don’t, pick up the trade paperback for almost as cheap.  They’re Batman-shaped funhouse mirrors, reflecting a different time and a different country back at you. And if you do, let me know, so I can feel more like a successful proselytizer than just another rube, gulled again at the boardwalk.

8 comments on “Reprint of the Year? Unclear. Jeff Tries to Puzzle Out DC’s Batmanga Reprints….”