Hey, here’s a photo where something has gone wrong.  Can you see it? 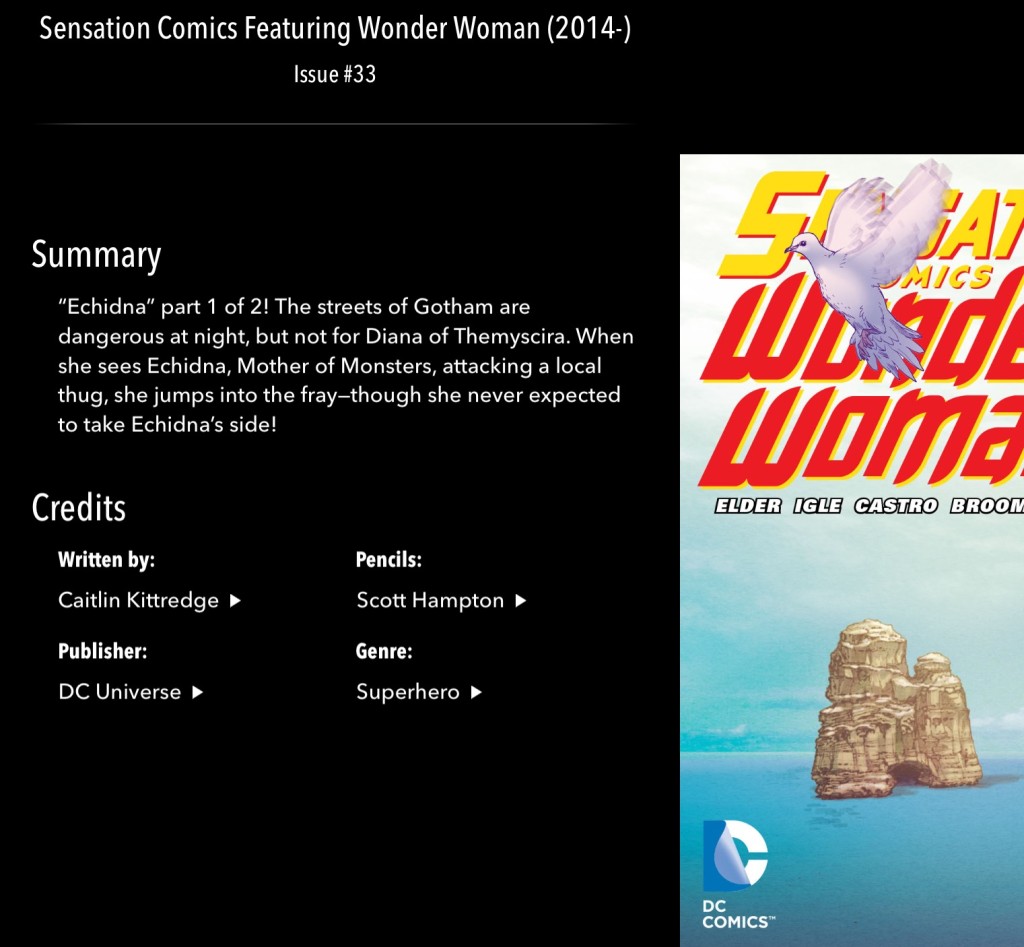 You see it, right?  (No, it’s not that half of the comic cover is cut off—that’s intentional.)  But since I was so incensed I took two screenshots, here’s another: 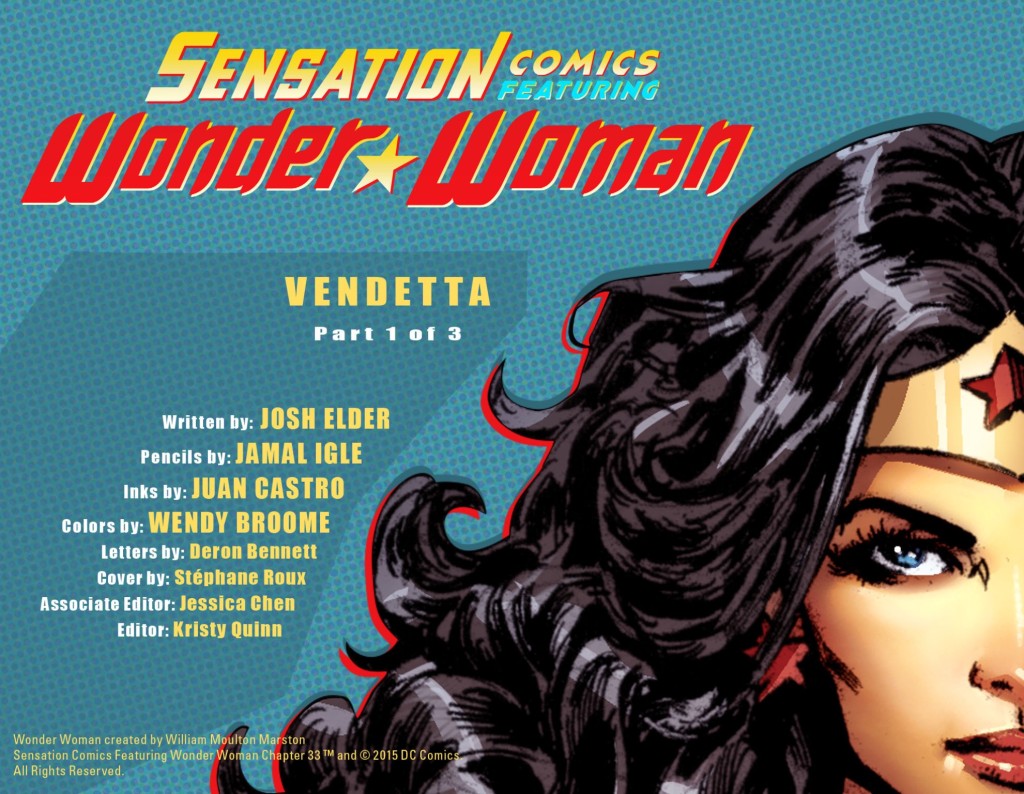 Here it is again. NOT RIGHT.

The first image is the description of Sensation Comics Featuring Wonder Woman #33 as it appears when you peek at it on the (broken, useless part of the) Comixology app where you see how stuff is listed in the store.  The second image is the actual credits page from the book.

You will notice these two list of credits are not the same, and the number of parts in the story are not the same.  If it’s any comfort, the stories are also not the same:  Vendetta is a story about Wonder Woman trying to put an end of the civil war happening in the Central African republic of Itari, where the Uwanges and the Mbindis are fighting, and at the end Ares, The God of War, shows up to complicate matters.  Because of a bunch of stuff going on this week, I had far less time to read comics than usual and so, honestly, this was just going to be a quick capsule review of the story.

But, okay, let’s recap.  This is a ninety-nine cent weekly comic about Wonder Woman, which is a thing I want to support and in fact am support by subscribing (which is why I had no idea how Comixology was describing the issue—I just download the damn thing and read it).  In the nine months since Sensation Comics started its run as a “Digital First” comic, we’ve had:

To the untrained eye, this looks like a remarkable amount of clusterfuckery, although the more time I dug around, the more sense it makes…kinda?  For example, even though Sensation Comics and Wonder Woman ’77 both have Jessica Chen as an associate editor, Sensation editor Kristy Quinn isn’t listed at all on Wonder Woman ’77.  So you have two separate editors, one or both of whom may be too busy or too bad at communication to let the other know, hey, “by the way, my book is scheduled to go digital at this time so you should let your readers know.”

It looks like another problem exists between the print and digital editions as far as pricing, packaging, and promotion goes, a general problem which bleeds over into the Wonder Woman titles specifically.  (If you want to see unbridled confusion, you don’t have to dig deep into the Net to find threads of people being baffled by whether a specific issue number is the print or digital edition.

In fact, if you check out the Amazon Kindle entries for Wonder Woman ’77 #1 (the first issue of the digital series) and Wonder Woman ’77 #1 (the collection of all six of the digital issues), they have the exact same numbering, author, artist, and they share the same 18 reviews.  Although the descriptions are slightly different, they are both for the first story and are therefore interchangeable.  Only through publication date, price, and file size (one lists a page count of “69 pages (estimated)”  which really doesn’t mean much since the half-pages of a digital issues make 11 “regular” pages into 22 “digital” pages)  can you figure out which is which…if you know what you’re looking for. 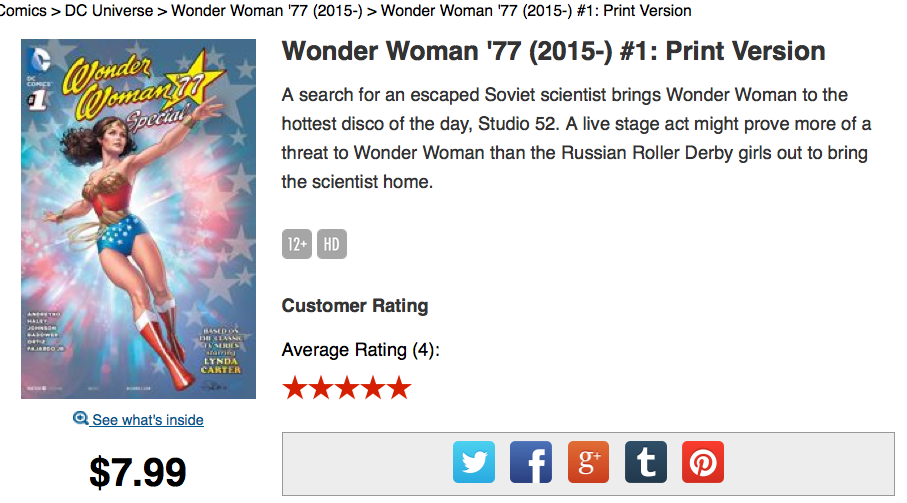 By contrast, Comixology distinguishes between the two identically numbered issues by calling the collection “Wonder Woman ’77 #1:  Print Version” even though, yes, it is something you can buy digitally.  (I pity the poor fan of the Wonder Woman TV show who only now finds out about the series and then goes online to shop for it.)

Is this standard for DC Digital?  Because if it is, it doesn’t seem like they’re pioneering a new marketplace for content as much as they’re undermining that new marketplace…or maybe they’re deliberately trying to be those pioneers who got eaten by bears or who had to resort to cannibalism to survive and died anyway. Recently, Graeme and I discussed DC’s long-ago splitting of The New Teen Titans book into two titles, one for the newsstand and one for the then-newish direct market.  In some ways, this is very different because the Teen Titans were near the top of the comics market at the time and Wonder Woman, bless her, is not.  And in some ways, this strikes me as pretty similar because the Teen Titans publishing split marked the beginning of the end of my time as a reader.

In a previous post, I talked a bit about my buying habits for digital comics, and those habits make me loathe to give up on Sensation Comics.  I tend to be better at keeping up with weekly DC Digital books I subscribe to than I am at the larger anthologies of 2000 AD and Shonen Jump Alpha.  I want to support Wonder Woman comics for all ages readers.  I like a marketplace where new talents can break in.  And at ninety-nine cents, I can forgive a lot of dross (although I have to admit I’m also getting tired of the unchanging status quo of the Wonder Woman books, the samey-sameness of the stories, and how everyone is either Wonder Woman learning a lesson or Wonder Woman teaching someone a lesson).

Marvel and DC have experimented with weekly content and one of the things they’ve learned is that they’re not very good at it, and those are on books that cost anywhere from three or more times the cover price of Sensation Comics.  Even with the same page count of a monthly book, the amount of work required for editorial shoots up dramatically for a weekly title, especially an anthology which might mean literally four times the amount of communication and coordination with talent.

So I get it, I do.  But what’s bothersome is that DC doesn’t, even nine months into Sensation Comics‘ digital run, a run that is starting to make the print strategy of “solicit dozens of titles three months in advance with minimal information for the few thousand retailers in existence and just assume they’ll read and track any online promotional push” look sophisticated.

(In fact, I don’t doubt part of the problem with Sensation Comics‘ mishaps is that Comixology and Amazon—the two largest (and only?) retailers of DC Digital Comics—don’t have anything like the level of the skin in the game of print retailers: that Wonder Woman ’77 digital trade had its price adjusted in less than two days of a retailer complaining.  Sensation Comics #33 has been on the market for exactly as long but still hasn’t been corrected.)

I don’t have a conclusion for this piece, or a moral, or even the kind of weirdo turn into dourness I usually end up with.  In The Unnamable, Samuel Beckett wrote, “Where I am, I don’t know, I’ll never know, in the silence you don’t know, you must go on, I can’t go on, I’ll go on.”  He was probably writing about life or language (or language as life), topics far larger and even more absurd than comic book reading.  But I do wonder who feels more ridiculous: the publishers of Sensation Comics Featuring Wonder Woman, or the purchasers of Sensation Comics Featuring Wonder Woman.  At this exact moment, I kinda feel like I’ve got the edge.

6 comments on ““Wonder” As In “I Wonder What They Were Thinking”: Jeff Ponders Sensation Comics (Again)”