It struck me, recently, that my oft-repeated (to myself, at least) belief that I am not really that into the whole autobio comics scene was utterly flawed. Despite proudly proclaiming this for a number of years while announcing that Eddie Campbell’s Alec — autobio in all but name, literally; it’s well-known that the series presents barely fictionalized versions of Campbell’s true-life tales, with names changed to protect the innocent, guilty and everyone in between — was the exception that proved the rule, I have been forced to accept that it’s simply not true. What I’m really not that into, it seems, are bad autobio comics.

The realization came to me last week when, soured on comics and the culture surrounding them, I turned to Lucy Knisley’s last couple of books to recharge my love of the medium. Knisley was someone I discovered via her First Second book, Relish, a graphic memoir that’s gone on to become a present for foodie friends on more than one occasion; lured in by her drawing style, it was her writing — conversational, warm but nerdy in the sense of it being smart and unashamed to be enthusiastic about her knowledge and interests — that made the book so charming and beloved for me. It was a book that managed to be intimately personal and universal at the same time, and watching the seeming ease with which she pulled it off turned me into a fan. 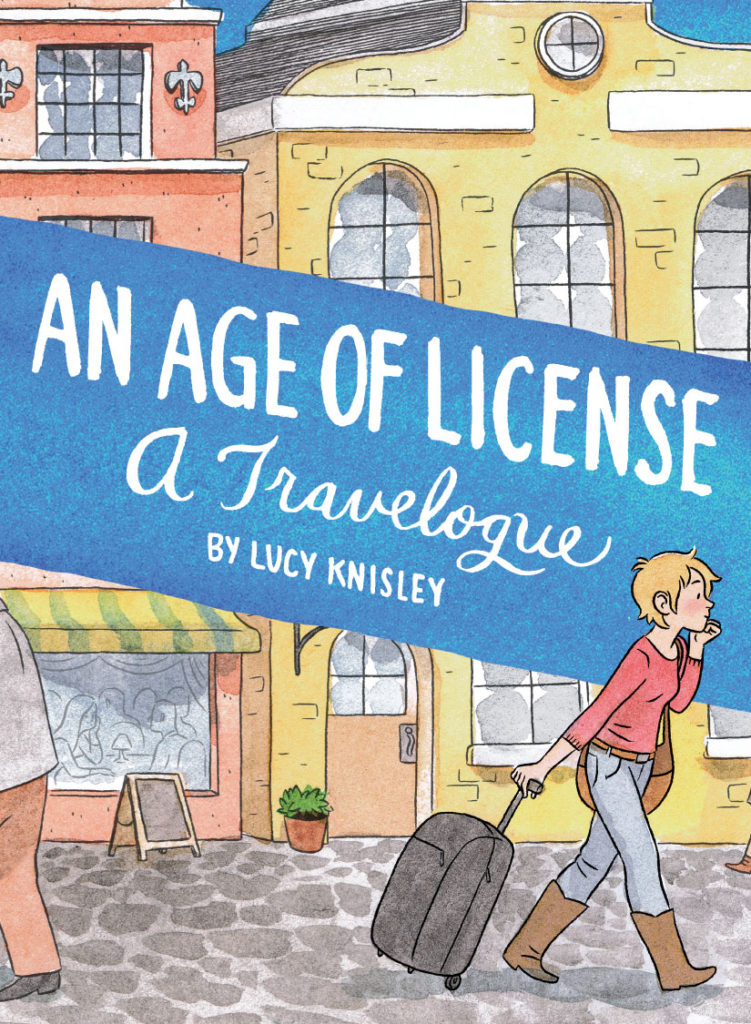 Her following two books, An Age of License and Displacement, are a departure from the laser focus of Relish; both are, essentially, edited diary comics of a couple of specific periods in her life created in the moment — or, at least, that’s how they read (There is an insert during License that suggests some level of editorial intervention after the fact, which is interesting to discover; it doesn’t interrupt the momentum per se, but it breaks the sense of taking the journey with Knisley temporarily). There’s an excitement and intensity that comes from this; events feel more unpredictable and charged with significance, while Knisley is freed from the pressures of having to come up with a larger meaning to what we’re reading, or tying all the threads together.

Of the two books, An Age of License was my favorite, in large part because its subject matter — Knisley undertakes a trip across Europe after being invited to a comic book convention in Norway, in part fueled (subconsciously) by the aftermath of a break-up — allowed for more variety in subject and emotion than Displacement, which follows Knisley as she accompanies her grandparents on a cruise, only to come face to face with how old, and how frail, they really are. 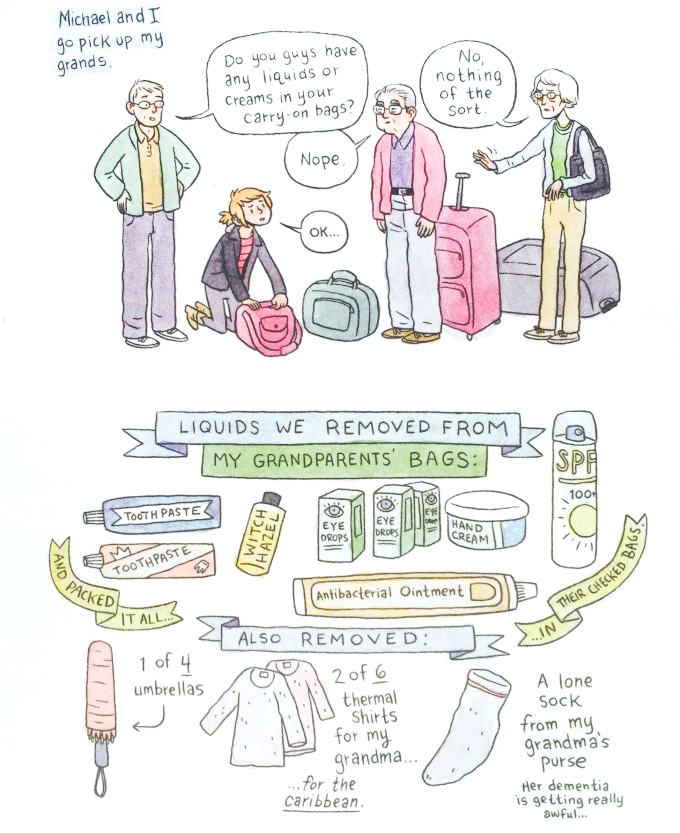 The latter book is a worthwhile read, with Knisley overwhelmed and unhappy with both her decision to go on the trip in the first place, and her helplessness in the face of her grandparents’ aging, but in a strange way, its coherence and empathy works against it; I, too, started to feel frustrated and overwhelmed that things weren’t — and couldn’t — get easier for her, and the more things felt oppressive, the greater my urge to escape grew to accompany her own sense of feeling trapped.

License, meanwhile, is messier and, as a result, a more exciting read. The contradictions that would feel cliche and artificial in fiction — in the midst of falling for someone new, she finds herself wracked with sadness and loneliness when thinking about her ex, for example — make her more human and relatable, in large part because her own disbelief in the illogic of her feelings is something we all have experience with; she manages to simultaneously share her emotions, contextualize them as honest and as ridiculous, and it’s the tension therein that feels genuine — to me, at least.

Both books, meanwhile, unfold with Knisley’s lively cartooning, which adds to the feeling of immediacy and reportage. There’s a life to her line (and a loveliness to her watercolors in Displacement) that is disguised by how open and easy it is to “read.” Like the best cartoonists, her strength is hidden in plain sight, because it looks so effortless and inviting. It’s artwork that’s deceptively difficult to write about, not only because it looks “simple,” but also because there’s a familiarity about the style: it looks right, in some strange indefinable manner. This is what cartoons look like, my brain says for some reason; this playfulness in the line, this level of abstraction and interplay between “cute” stylization and honest, “ugly” situations. I don’t know why.

So, yes; the Knisley books did exactly what I wanted them to. I finished them with a sense of, “comics can do whatever they want, if the right people are in charge,” and hungry to read more things created with that level of passion and identity and honesty. It was enough to finally put paid to my self-deception about autobiographical comics; I don’t want to read emo navel-gazing, perhaps, but something that interacts with the world around us and says something real about the creator in the process? Yes. I’ll have many, many more of those, please.