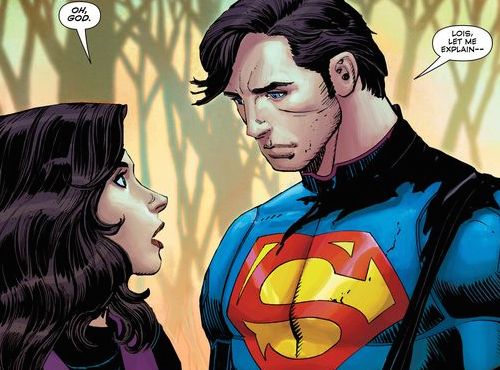 Beyond the headline-grabbing “Lois Lane finds out!” element of Superman #42, there’s something else very interesting going on under the covers of Gene Yang’s second issue as writer; something that speaks to the (wonderful, still highly recommended) issue of Action Comics that came out this month, in an unexpected way. Namely, when did Superman turn into what the kids would call a social justice warrior?

For those who haven’t had a chance to read Superman this week yet, here’s the basic plot: Superman, Lois and Jimmy are led to the headquarters of Hordr — yes, like Tumblr — a “tech company” that’s all about buying and selling information, and blackmailing people into doing its bidding. Those who want to read a strange, accidental parallel with the Gawker-being-complicit-in-blackmailing-Condé-Nast’s-CFO thing, feel free, but it gets odder: Hordr is essentially crime syndicate Google. There’s even a Hordr bus that picks employees up on the streets of Metropolis before flying them into the “campus in the clouds,” the Hordr_plex, where the corporate culture is all free coffees from floating coffee carts and happy employees promising to change the world.

This, as I said, follows on from the police brutality issue of Action earlier this month, with cops purposefully trying to turn a peaceful protest into a riot, going so far as to use tear gas to incite the violence they clearly want. Somewhere along the way, Superman has started to be a character whose adventures can be — are being — used to make social commentary, to varying degees, about the world around us.

Of course, Grant Morrison would excitedly tell us that he’s always had that in his DNA, and that it goes back to the earliest incarnations of the character. That’s true, to an extent; the first Superman stories definitely saw him as more of a force for change against corrupt institutions, but the character himself wasn’t really actively used to interact with the real world until the 1940s radio show, and honestly, has rarely done so since.

Maybe that’s because, traditionally, Superman has been too powerful to do so — considering everything he was able to do in the past, the idea of him dealing with real life injustices could easily have read as patronizing and insincere, not to mention potentially, accidentally legitimizing to the oppressors (Why didn’t Superman just dismantle Apartheid, for example? Wasn’t that unjust enough for him?) — whereas now, the newly-depowered Superman makes things more of a fair fight, perhaps.

Or maybe it’s that Yang and Action writer Greg Pak, neither of whom get to enjoy the white privilege of previous Superman writers, feel that the character is super-equipped (Pun only slightly intended) to talk about things that are strange, unusual and problematic with “the American way” because he stands apart from the societal norm in some way; finally, someone using the “strange visitor” part of the mythos for the forces of good!

Whatever the reason, both Superman and Action Comics currently feel exciting, entertaining and fresh in a way they haven’t done in a long time — yes, even including the Morrison Action issues, I’d argue. It helps that John Romita Jr., Klaus Janson and Dean White are killing the visuals on Superman, with Aaron Kuder and Tomeu Moray doing the same on Action, of course, but really: there’s something in the writing of these books that makes them seem like essential reads for those who like superheroes right now. I mean, come on: Google Blackmail.

4 comments on “Truth and Justice: Graeme Wonders When Superman Started Living In The Real World”