Oh, hello, everyone. Nice to see you all again. Sorry for having been so … intermittent, I guess, over the last while. The usual internet-content-provider excuses apply–“life got in the way,” “busy time at the ol’ dayjob,” etc.–but there’s also been a bit of that familiar pop culture malaise, a feeling not so much that I don’t enjoy anything I’m consuming, but that I don’t really care about any of it. Anything I would’ve written would’ve reflected that (you can probably actually see some of it in my PunisherMax post from a few weeks back–there were ideas that I wanted to explicate but just couldn’t muster the enthusiasm for), so I wound up largely not writing.

And that’s where things stood this week, this crazy-busy and generally weird week (in which I somehow wound up on sportstalk radio in San Diego discussing baseball?), when my wife and I realized that we had childcare and money and time Thursday night and could sneak away for a showing of Captain America: Civil War. Surely that would engage me, right? At one of those fancy theaters with leather seats and local beers and decent food, no less! Fun! Cheerfulness! Joy!

Orrrrrrrrr a film that leapfrogged my malaise the other way, by being just frustratingly not-as-good as I wanted it to be. Let’s put in a page break, because I didn’t enjoy the film nearly enough to be careful tiptoeing around any SPOILERS.

Okay, still using this stupid list format for some reason. Some reactions to the movie….

1) Reviews are not a good thing. I have a suspicion that my main reaction to this movie, the sense of mild disappointment and bafflement, stemmed more from the prerelease hype than anything else. I hadn’t read any reviews in full, but it was impossible to be on Twitter and not pick up the general sense of “This is a REALLY GOOD superhero movie,” and in some cases “A genuinely good MOVIE.” (Looking at you, Devin Faraci.) So I had in the back of my head a possibly unfair expectation that this movie flat-out failed to meet.

2) It was perfectly fine. That’s the thing. If I had heard “this is a rock-solid Marvel movie,” and gone in looking for that, I think I probably would’ve come away satisfied, and maybe impressed. Because … well, because that’s what it is. It’s the latest installment in the Marvel mega-franchise, in look and feel and tone and presentation. It’s better than Age of Ultron (it has more visual panache, a clearer story, better character moments, and much less of a sense of its own entitled smug weariness), and probably falls somewhere in my top three or four Marvel movies overall once everything’s considered. Because…. 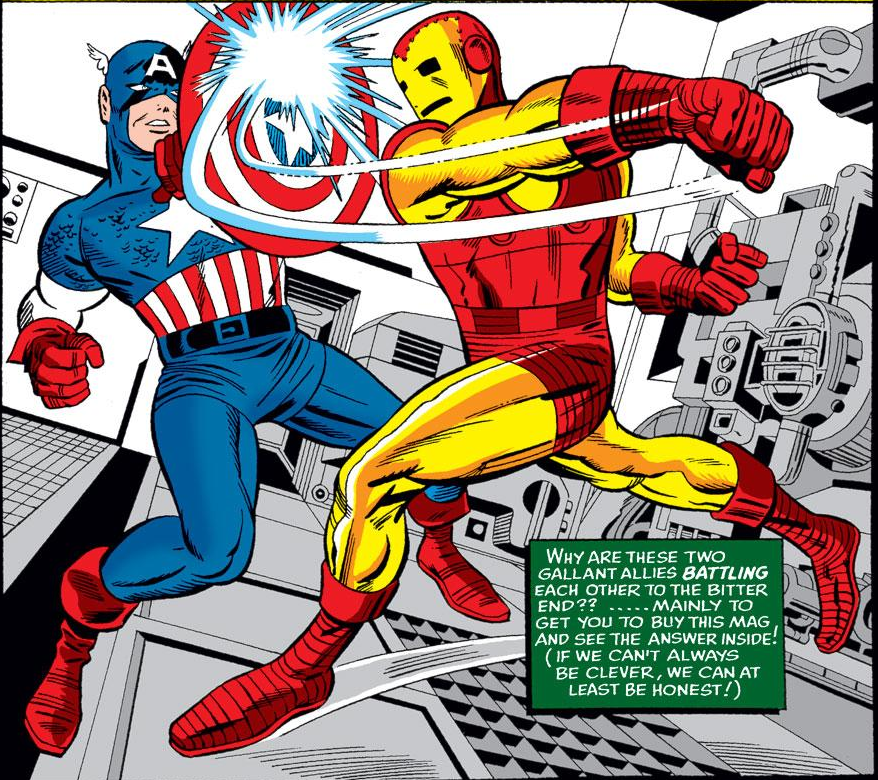 3) There are some genuinely excellent elements. The opening fight scene is very well done, with a clear sense of space and purpose, and the Avengers team working together smoothly and tactically. Actually, all of the fight scenes were well above average; even the shot of the two teams running toward each other that looked so comically stupid in the trailer works much better in context. The story is grounded firmly in the established character relationships and the past events of the umpty-trillion earlier Marvel movies, the conflict feels much more organic than it does in the eponymous comic series, and the villain of the piece turns out to be remarkably clever and subtle. Again, it’s an above-average Marvel movie. Also, as you’ve probably heard…

4) The new characters are terrific. Both Spider-Man and the Black Panther are very well represented here, even if both feel somewhat grafted onto the story. (Wakanda is integral to the plot, but the introduction of T’Challa is less so. Similarly, Spider-Man is well-used once he’s brought into the narrative, but there’s no real reason given why he in particular should be there rather than one of the other super-powered characters running around the TV shows or Netflix properties.) Both actors are exceptionally charismatic and well-suited to the characters they’re playing; I’m in the minority in that I’m more excited about Black Panther than Spidey, especially if the inclusion of Everett Ross means that they’re going to be mining my beloved Christopher Priest run for tone and/or content. But both stand as excellent additions to the universe, and both are used well if they had to be there at all. However, their inclusion furthered the feeling that….

5) This is not a Captain America movie. It just … it just isn’t. At best it’s a two-hander, as Tony Stark has arguably a more complicated character arc and just as much screentime as Cap. But in point of fact it’s an Avengers movie. Whole scenes are devoted to non-Cap subplots (Vision and Scarlet Witch, notably; Spider-Man and Iron Man; etc.), and there’s nothing in it that makes it feel specifically like Cap’s story rather than Iron Man’s (or the team’s). In fact, it’s only editing and choice of what to include that prevents it from being T’Challa’s story–he’s got a pretty complete arc as well. All of which would be fine–well-rounded supporting characters are a good thing, obviously–but all of that depth comes at the expense of depth in Cap’s story itself. You might ask, “Who the hell cares if it’s a Captain America movie or not,” which would be a very valid question, and not one that I have a good concrete answer for, other than “Apparently I do.”

6) Ham whiskey is even worse than it sounds. This movie theater offered craft cocktails and bottled punches as well as beer, and they were nice enough to pour me a sample of the country-ham-infused-whiskey based punch pictured above. “Is it, like, very hammy,” I asked the friendly waiter, and he started nodding before I even finished. “Yeah, man,” he said, “VERY hammy. Like, super ham flavor.” He was not wrong about that, he just failed to mention that it was revolting. Sorry, ham whiskey!

7) The music in this movie, like the other Marvel movies, is remarkably dull. How they manage to make this many superhero themes without accidentally stumbling across something memorable I’ll never know. The Star Wars: Rogue One trailer played before Civil War, and really drove home just how effective music can be at eliciting emotion. If there’s anything that Marvel really needs to fix, it’s this. Well, this and….

8) I’m pretty worried about Dr. Strange. The trailer for Dr. Strange played also, and I feel like the white-washing controversy is really doing an excellent job of distracting everyone from the fact that it looks like a really dull film. There’s still plenty of time for a course-correction, and it’s also possible that it’s just a bad trailer, but it has me worried. (Of course, the last two Marvel trailers that had me worried were Netflix’s Marvel’s Daredevil season 1, which turned out swell, and Ant-Man, which…..)

9) This movie made me really appreciate Ant-Man even more. Partially because Paul Rudd’s brief appearance here emphasizes how much more engaging he is to watch than nearly everyone else in this film, but also because it had so many things that this one lacked: a detachment from the ongoing Marvel narrative while still being part of the Marvel Universe, for one thing. A sense of humor and fun, for another. And a relatively tight runtime, for a third, because….

10) Good lord was this thing long. The official running time is 2:27, and you feel every single minute of it even thought the movie contains so many fun elements and setpieces. It’s just a long goddamned time to be watching men in tights yell at each other.

11) Ultimately, this is going to be a GREAT movie when it comes to cable. Unlike Age of Ultron, which has turned out to be un-re-watchable for me, I feel like this one will be something I’ll stop on if I’m flipping channels. There’s your pullquote from this review, Marvel: “Civil War sure is better than mindlessly flipping channels!” If the pre-release reviews had pitched it like that, I really think I would’ve liked it much more. 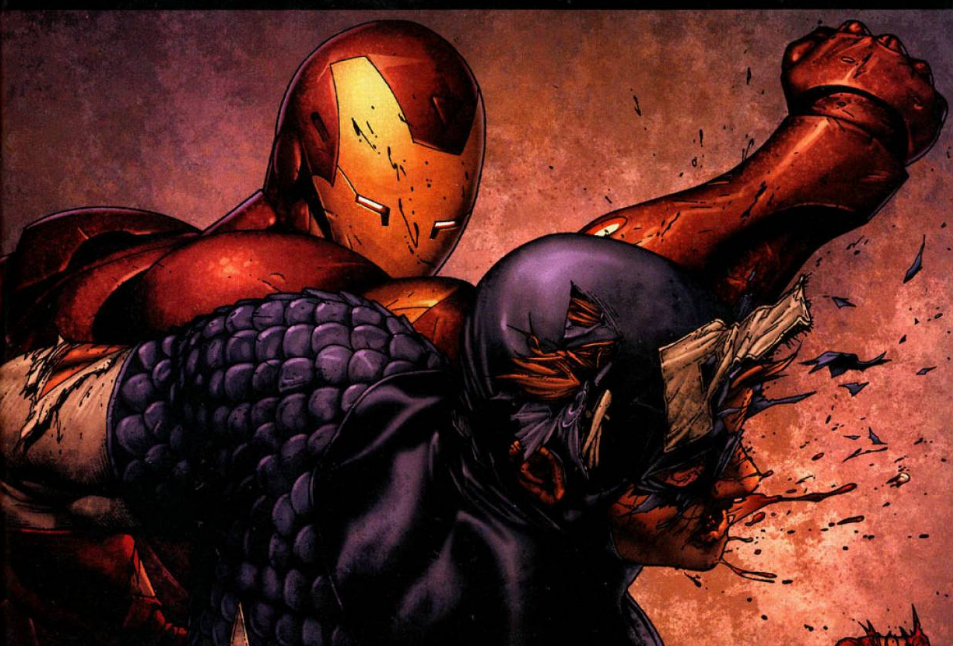