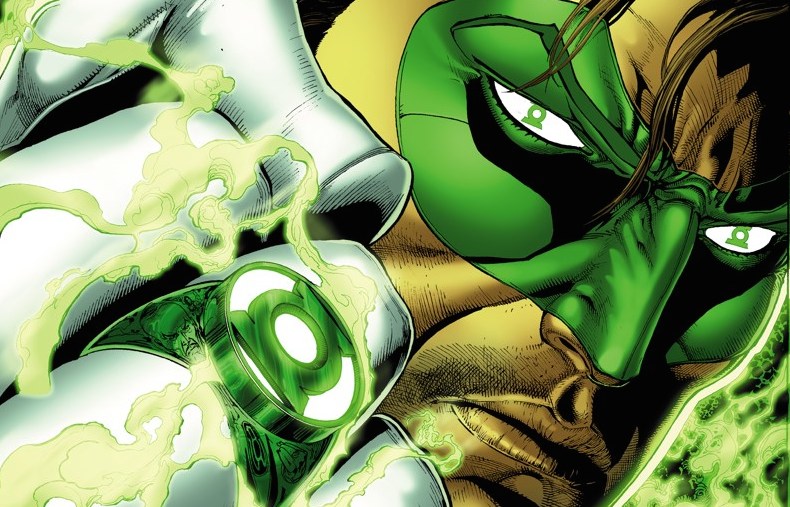 You might remember, back in June, that I did bi-weekly posts about the first month of DC’s Rebirth, with the intent that I’d keep that up while the new launches continued. And then, well, I didn’t.

I have the best excuse: at the start of July, construction — actually, demolition, initially — started on my house, which meant that my wife, myself and our two dogs had to move out, and things have been ridiculous ever since (We’re still out of the house now), especially when you factor in San Diego Comic-Con in there as well. Not only has my writing schedule been off, so has my reading schedule. Updating things on a bi-weekly basis? Are you joking?

Which means, basically, I have a bunch of titles to catch up on. Let’s do the July books, shall we?

Batgirl #1: I raved about this on the podcast, I think, but it’s one of the most successful Rebirth books for me so far — Hope Larson brings a new tone to the series that’s part YA, part manga and… it’s great. There’s an energy to this book (helped by Rafael Aluquerque’s art) that feels fresh and genuinely looking to please an audience that DC underserves in a way that most of the other Rebirth books aren’t. It doesn’t feel like a run that will be particularly lengthy, if only because the set-up is clearly temporary (for reasons I’ll get to in a second), but this is likely going to be a gem of the line while it lasts. 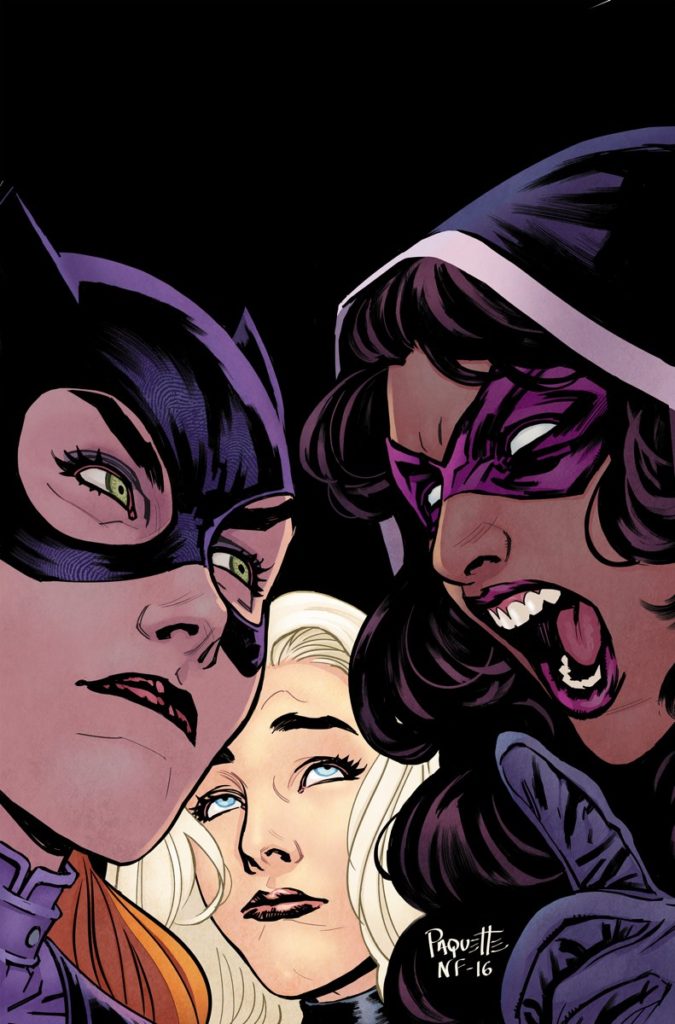 Batgirl & The Birds of Prey: Rebirth #1: As if to underscore the temporary nature of the Batgirl book, the Birds of Prey issue clearly states that it takes place after Batgirl returns from the journey she’s just set out on. This is an uneven issue that tries to do too much and falters in the execution. It’s a shame — the “first” issue of the regular series is already out, and it’s by the same team and far, far stronger than this issue — but this one alone feels a little unstable and overstuffed despite the promise of the premise. The art by Claire Roe is really nice, though, and something else that gets better in the next/”first” issue.

Hal Jordan & The Green Lantern Corps: Rebirth #1/Hal Jordan & The Green Lantern Corps #1: Also file under “uneven Rebirth issue, and then the regular series ends up significantly stronger.” Robert Venditti and Ethan Van Sciver have a lot to do in the Rebirth issue — essentially undoing the changes of the last year’s worth of the old Green Lantern series — and it just feels inorganic and forced. Once it’s out the way, though the first issue of the regular series feels a lot better, with more momentum and the sense that there’s a direction once again. As a GL fan who felt somewhat alienated by the “Hal Jordan, renegade” focus of the last series’ final year, this is pretty much what I’ve been waiting for all along — a nice mix of Gerard Jones and Geoff Johns’ approaches to the franchise.

The Hellblazer: Rebirth #1: I wish I could be more generous toward this issue, which was technically fine, but… that’s the problem. It’s just fine; the saving grace is Moritat’s art, while Simon Olver’s writing feels flat and Constantine-by-numbers despite an over-complicated plot intended to show that John’s a callous badass. It’s better than the first New 52 Constantine book, less fun than the last volume, but there’s room to grow. If nothing else, underwhelming Rebirth issues haven’t proven to be an appropriate guide of what’s to follow so far.

Justice League: Rebirth #1/Justice League #1: There’s a sense that Bryan Hitch is both writing the platonic ideal of Justice League comic, at least under the Grant Morrison theory — plot-driven, with earth-threatening stakes — and missing the point of what makes Justice League work, because these issues are frustratingly close to what I want while missing the mark dramatically. Perhaps it’s because the threats are indistinct to the point of being interchangeable (and therefore not particularly threatening, despite their scope), while the characterization is off just enough to be noticeable. Tony Daniel’s art is nice, though, and arguably better than Hitch’s on the Rebirth one-shot; I feel like I should point that out for Jeff’s sake. There’s potential here for the book to fix itself, but it’s definitely not there yet. 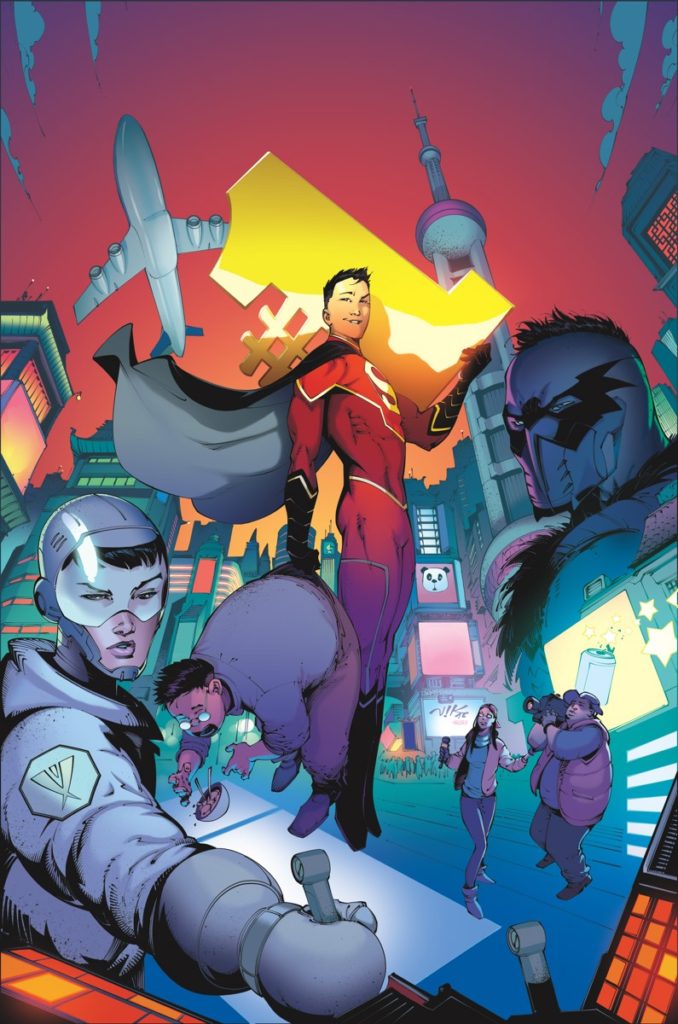 New Super-Man #1: I’m not quite sure what I really expected from this series, but I like what Gene Yang and Viktor Bogdanovic are giving me anyway; a jerk bully who gets super powers by accident and doesn’t really show many signs of that sudden redemption that means he’ll realize he should be a good guy anytime soon. Yang’s writing is sharp and goofy — the lead has tragic subtleties to him, but in such a way that doesn’t detract from his awfulness — and there’s hidden depths to the concept of a series centered around a China so determined to prove its strength to the West that it purposefully sets out to create its own Super-Man, Wonder Woman and Batman. Plus, seeing Bogdanovic getting to share his none-more-Capullo stylings outside of the Batman: Arkham books is nice, too.

Nightwing: Rebirth #1/Nightwing #1: I was cynical about this title, not only because it seemed like a retrograde step after Grayson, but also because it was Grayson‘s writing team without Tom King, A.K.A. the guy I was really into. Suffice to say, I was being an idiot; this is, to all intents and purposes, Grayson with His Costume Back, arguably more fun — if less formally experimental — than the previous book, but with the heart and, to a certain extent, the tone still intact. If anything, this book has more heart, which I appreciate fully, so consider me on the Tim Seeley train for this one. Javier Fernandez, who takes on the series with the first “regular” issue, lives up to Yanick Paquette’s Rebirth artwork, too. All told, this is pretty much what I wanted from this series and didn’t think I’d get.

Red Hood & The Outlaws: Rebirth #1: If only there was a polite way to say, “I’m not the target audience for this” and not have it sound like either passive aggressive dismissal or going easy on a bad book. And yet, I’m not — this left me utterly bored, but I have no interest in Jason Todd and it suffers from a sizable crossover plotwise with Nightwing (Both books have a premise in their opening storylines that are “Former Robins go undercover with bad guys in order to take them down while Batman frowns from the sidelines but believes in his proteges nonetheless”). It’s not a bad book, per se, but there’s nothing in either Scott Lobdell’s script or Dexter Soy’s art to win me over as someone who isn’t predisposed to enjoy it. It’s… the Red Hood book for people who really want to read a Red Hood book, I guess…?

Titans #1: This, meanwhile, was definitely more my speed — and that’s not a Wally West joke. It’s actually a pretty generic issue that gets by on the audience’s familiarity and affection for the characters in question as much as Red Hood, but the difference is that I actually have a lot of affection for these characters; enough, apparently, to get me to enjoy a book with Brett Booth artwork. (Good job, writer Dan Abnett.) Something that helped with my enjoyment is the last page reveal, which threatens to detourn the Dr. Manhattan plot of the Rebirth oneshot considerably if it’s not a fake-out; seems that all you need to get me back onside is an unexpected villain appearance that pulls the rug out from under my feet. Take note, everyone else…

At some point in the next couple of weeks, I’ll wrestle the August books to the ground, I promise. Unless some more complications with construction pop up, which is not entirely unlikely, I admit. Damn you, ill-timed publishing relaunches and/or home construction!