I had these plans, right? Since I’ve been doing some reviews of comics elsewhere on the internet (as Jeff described in his way-too-kind introductory post, below), I’ve been fortunate enough to wind up receiving some review copies. But the amount of writing I was doing was pretty limited, and I am the sort of sad, neurotic person who starts feeling VERY GUILTY when people are sending me things to review and I am not reviewing them.

(I am also the sort of sad neurotic person who always wants to send “thanks-for-thinking-of-me!” emails in response to press releases. I am ill-qualified to exist in the modern world.)

So I figured this new gig would be a chance to shed some of that guilt, and that I’d start by going through some of the avalanche of DC YOU books. (I know that everyone else on the internet has already gone through this exercise, but … well, I have a lot of guilt.)

I am, I think, one of the target audiences for this particular soft-relaunch/reboot thing. I used to read and enjoy DC comics, but I’d started tailing off in the years leading up to the New 52, and took the New 52 reboot as a chance to pretty much bail entirely. I finished out Morrison’s Batman stuff, kept up via library with Snyder’s Batman book and Johns’ Superman book, and generally found that the rest of the New 52 was of little interest to me.

But as people (such as, for example, the two guys who run this site) called attention to the more recent efforts – especially Grayson, but also the new Batgirl stuff, the inexplicably enjoyable Injustice book, and the Pak/Kuder work on Action Comics —  I found myself enjoying them, and intrigued by the wide variety in the relaunch.

But as I was reading the new Green Lantern book, which features Hal Jordan on the run(?) with some kind of DIY version of a power ring(?) and a style makeover straight from Spirits-of-Vengeance-era Johnny Blaze(?!??!?!), I found myself trying to figure out what the hell it is that makes me WANT to read a book that I have no immediate emotional anchor to.

Which, in turn, made me think of the book that got me into DC comics the first time.

Like most kids of my era (i.e. OLD PEOPLE NOW), my first comics were a scattershot mix of whatever my parents gave me to shut me up – some DC, some Marvel, some Archie … really, whatever was on the spinner rack by the register.

But once I started picking out the books myself, I leaned hard toward Marvel, following the same path that hooked so many other American kids at the time: I started with the licensed books, moved to the X-books and Spider-Man stuff, got tricked into buying the New Universe, and so on. But I never really engaged with DC. Just didn’t care. Didn’t even give them a shot. There was no need to – the books I wanted from Marvel were already pushing the limits of my allowance, so why explore?

Because sleepaway camp. When’s there’s no store to go to (and digtal comics are like 25 years in the future), you find the people with comics and you read whatever the hell they have, no matter how uninteresting it is.

Which is how I wound up reading a copy of Justice League International #23, by Keith Giffen, J.M. Dematteis, and Kevin Maguire. 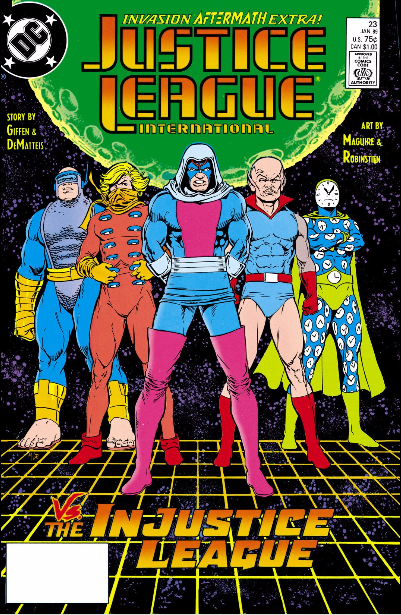 I had basically a Super-Friends-level understanding of the DC Universe, and this wasn’t exactly a natural  jumping-on point. It was an interstitial issue of the Invasion! crossover that featured the bwah-ha-ha era Justice League bickering and sifting through wreckage of an alien ship for 20 pages and vaguely battling a completely hapless version of the Injustice Gang, before culminating in a cliffhanger that had nothing to do with the action that had proceeded it. I knew nothing about any of the characters – maybe a vague understanding of Martian Manhunter, and I knew that Guy Gardner was not Hal Jordan – and wasn’t even particularly clear what the Invasion! thing was about.

But I loved that one single issue enough that I started buying the book monthly as soon as I got home. I tracked down the back issues. I followed the spin-offs, and expanded from there back through Invasion! to Legends, where this incarnation of the team started (kind of), and outward to other DC books.

(Basically, the dude who had that JLI issue at summer camp ruined me financially forever. I hope you’re miserable somewhere, Andy Neuwelt.)

So as I was sitting there the other day, trying to figure out why I was supposed to care about a new, more slender, less interesting incarnation of Lobo, I kept thinking about that issue of Justice League, and wondered why it had been so damned sticky when so many of these books just skidded off my eyes.

And then I had the bright idea of going back to that very issue – the issue that DC’ed me – and trying to see if I could still spot what had grabbed me so hard all those years ago.

(The obvious snarky answer is that it’s because that book was capital-G Good and these books were not, but I really don’t think that’s the case. Many of the DC YOU books that failed to capture me were objectively well-crafted, but whatever obsessive part of my brain has kept me coming back to comics for all these years just didn’t connect with them.

The second-most obvious answer is that I was 13 at summer camp and nothing is ever going to seem quite as awesome as things that happen when you’re 13 at summer camp. But as it’s impractical to ask DC to de-age us all and send us to camp to fully enjoy their new books, I figured I’d see if maybe there was something less abstract to it.)

Somewhat to my surprise, it kinda worked. At the very least I found a few commonalities that, it seems pretty clear, are ways to hook people (or me, at least) into a book. And while some of them were painfully obvious, at least a couple of them were things that I wouldn’t immediately have suspected. 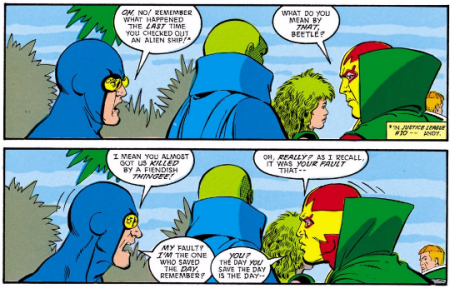 Tie back to things that happened before. This goes pretty firmly against the approach that Marvel’s been using lately, but I think it’s a hidden asset of the weird non-reboot-reboot that DC YOU is doing, and certainly an advantage over the standing start of the New 52. Previous continuity can be a surprisingly beneficial thing in comics. There are very few superhero books that I started reading at issue #1 when I was a kid, and the idea that there were these previous events – major and minor – is part of what I enjoyed about reading them. It’s a cheap shortcut to giving the characters false depth, but if you’re working in 22 page chunks separated by a month, cheap shortcuts aren’t an inherently bad thing. It can be hideously misused and overwhelming, but the use in this JLI issue is just about perfect: it gives some past continuity, illustrates relationships, and puts this particular situation into a longer spectrum of action. (Also, that footnote led to me back-issue diving and buying the referenced issue. Maybe I’m just an easy mark.)

In DC YOU, Grayson is a book that really nails this balance, I think — knowledge of what’s gone before deepens the book, but it isn’t essential to enjoying the story. Maybe not coincidentally, Grayson also happens to be pretty good at the next item, as well. 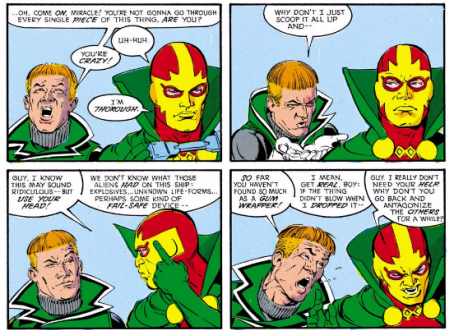 A little formalism is a really good thing. The talking head device above is pretty commonplace now (Bendis alone has probably done 1,200 similar scenes), but it was new to me at the time, and I totally loved it. The simple, simple trick of holding a static camera on these two characters for eight full panels as they just argued … it was something I remember really taking note of at the time. It helps to have an artist who’s an absolute master of facial expressions and physical acting like Maguire is, sure. But a big part of it is just choosing to approach a page that way.

Grayson nails this, as does The Omega Men — Tom King seems like a writer who puts a LOT of thought into formalist experimentation; I feel like he probably writes incredibly detailed scripts. In fact, I wonder if the reason I felt like I hadn’t seen this sort of effect before, back in 1989, is because it’s tougher to pull off in Marvel’s plot-art-script writing style than in DC’s full script. Regardless of the reason, the DC YOU books that engaged in more obvious flourishes like this (including, off the top of my head, Constantine, Bizarro, Gotham By Midnight, even the Quantum-and-Woody-esque chapter titles in Starfire) all stuck with me much better than did the more straightforward Green Lanterns and Green Arrows and Red Hoods of the line. 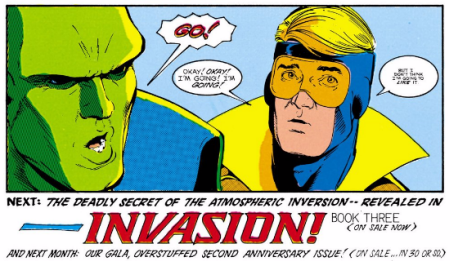 Cliffhangers work. Even if they’re really stupid non-sequiturs, as this one was. The fact that cliffhangers bring back readers is not exactly a groundbreaking discovery, but I had forgotten just how effective they could be — I went out and bought Invasion! #3 just to find out what the hell had happened here. I didn’t even bother finding Invasion! #1 and #2 until years later. The usual suspects continue to do cliffhangers well in the DC YOU (Geoff Johns, Scott Snyder), but the one that really stuck with me was Bryan Hitch’s last page reveal on the first issue of his JLA book, and he manages to nail another one this week in issue #2. 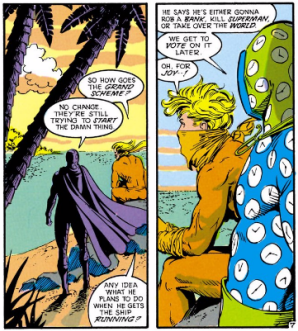 Fights are overrated. JLI #23 was the book that made me realize how little I cared about the supposed high-stakes fights in my comics. I enjoyed this book as a breezy sitcom, and, sure, there was a little action thrown in here or there, but it was immediately clear what was actually driving the book. Which, in turn, made me reconsider what it was that I liked about the other superhero comics I was reading.  You’d think the years of non-stop melodramatic soap operatics from X-Men would’ve tipped me off, but I was 13 and convinced that I was just waiting for Wolverine to stab people. And, again, I’d say that with remarkably few exceptions, the fewer panels devoted to explodey fight scenes in a DC YOU book, the more satisfying I found it. (With the exception of All-Star Section Eight, of course.Maybe “ welding dogs to faces” isn’t really “fighting,” per se. Also, I’m very definitely a mark for anything to do with Hitman.)

There’s a few more contributing factors, I think – humor was a HUGE draw for that JLI book, after all those years of misery and angst in the X-books, although the only DC YOU book that corresponds with is Bizarro. Somewhat weirdly, I’d also cite Bob Lappan’s lettering as something that I loved about the JLI run, and love to this day. It appears that Bob Lappan does not letter any of the DC YOU books, which I feel comfortable calling a small tragedy.

I dunno. Maybe all of this stuff says more about me than it does about what makes for a catchy comic – maybe this really is just a list of stuff that I like – but taking the time to revisit and ponder that issue really reframed how I found myself thinking about all these new DC YOU comics. Maybe next week I’ll actually manage to review some of them.

16 comments on “How To Hook Me On A Comic: Matt Accidentally Writes About Justice League International #23, For Some Reason”