I love the Detroit Justice League of America.

That’s not sarcasm, and I don’t mean it ironically; I genuinely love the characters, and the concept. They were the first Justice League I read even vaguely regularly as a kid; the newsagents at the end of my street would get in irregular copies when I was starting to pick up American comics, and it was just around the time of Steel, Vibe, Gypsy and Vixen making their mark on the book. They’re my league, in some strange, nostalgic, indefinable way. I genuinely love them.

More excitingly for me, it turns out that I actually like them, too. This past weekend, I picked up Justice League of America #233-236, the first appearances of the characters in the regular series (They’d debuted in Justice League of America Annual #2, a couple months earlier), and was relieved — and a little surprised — to discover that they’re actually pretty strong comics, despite the reputation they’ve gained in the decades since.

It’s not that they’re forgotten classics of the genre — they came out in 1984 (Yes, it’s the entirely-unrecognized 30th anniversary of Justice League Detroit), and there were inarguably better superhero comics being published at the time — but they’re definitely good, and I think that’s something worthwhile, especially for a series like this. Reading all the old Avengers books over the last year for the podcast, it’s become clear that there are times when flagship titles like JLA or Avengers aren’t any good — that they exist purely to fill a spot in the publishing schedule, without any larger aim, and without any real entertainment value, either. As a longtime Justice League fan, I feel relatively confident in saying that the beginning of the Detroit era for the JLA was more interesting and had more potential than anything else that book had seen on a regular basis in years. 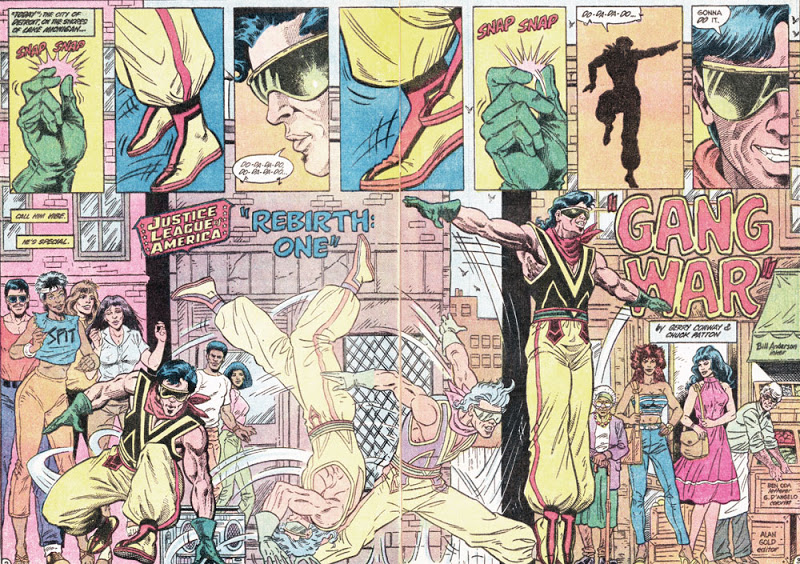 And these four issues — ostensibly, a four-parter called “Rebirth,” but it’s more like a three-parter with a prologue of sorts first — really, genuinely have a lot of potential. There are a lot of things thrown out in these issues that beg to be explored later, whether it’s the agenda of Steel’s grandfather, Aquaman’s creepy overstepping of boundaries when it comes to being a leader (At one point, he uses his telepathic powers to shut down an argument with Steel, which feels like something that needed to be followed up on) or, my personal favorite, Vibe’s putting on a cliched accent when he’s around the team that he drops when he’s at home (Something that is expressly called out in dialogue). These four issues genuinely feel like the beginning of something, and made me want to read more.

(I didn’t read these issues, when they came out first time around; my first issue was #237, and I admit to regretting not picking that up this weekend, as well. It was only $1! What was I thinking?)

That’s not to say that there’s not a lot that’s derivative, as well; Steel is essentially little more than a white Cyborg with more angst, while Gypsy — for all that we see her — feels very much like Gerry Conway is trying to retrofit himself his own Kitty Pryde character. The idea of the JLA suddenly made up of three teenagers, an equally unknown quantity in Vixen and four lesser-explored veterans remains awkward, with the explanation given in JLA Annual #2 being… tenuous at best. But, once you get over that hurdle, there’s more here to like than dislike.

There are also hints of Justice Leagues to come, as well: The attempts to insert sitcom into the formula via the team’s new Detroit HQ feel predictive of the Giffen/DeMatteis works to come, especially the I Can’t Believe It’s Not Justice League revivals. The soap operatics hint at Brad Meltzer’s Justice League, while the new-heroes-try-to-get-along-and-become-better-superheroes brings to mind Geoff Johns’ New 52 incarnation of the team. What may have seemed, at the time, to be very “un-Justice League” now reads, oddly, as an amalgam of ideas ahead of their time and execution contemporaneous with something like Marv Wolfman’s New Teen Titans or Paul Levitz’ Legion of Super-Heroes.

It falls apart, after these four issues, I know that: ideas and characters get dropped (Aquaman, who put the team and new approach together, is gone six issues later), and others get hijacked by big events (The Steel reveal proves to be a Crisis on Infinite Earths tie-in, I remember, which overwhelms the story underneath it all). Gerry Conway, who seems to have such confidence and purpose in these issues — there’s a sense of him being enthused by his new direction, convinced that this is what they want, even if it turns out he was apparently wrong — seems to lose interest, direction or both, midway through the run, and it never quite reaches this level again. This really might be as good as it got for these characters, sadly enough.

And yet, I find myself wishing that DC would collect the Mars-Earth War three-parter that led to this storyline, the JLA Annual, and these issues all together in one place, as a redemption of the reputation that the Detroit League has found itself saddled with. They’re not just “not as bad as you think,” they’re a glimpse at the Justice League that could have been, the Justice League that’s coming, and something that just might make you wish that these characters had been given more of a chance than they eventually received.

That said, who would’ve thought that Vibe would be the breakout star of the book, huh?

2 comments on “Don’t Forget About the Motor City: Graeme Revisits the Birth of Justice League Detroit”