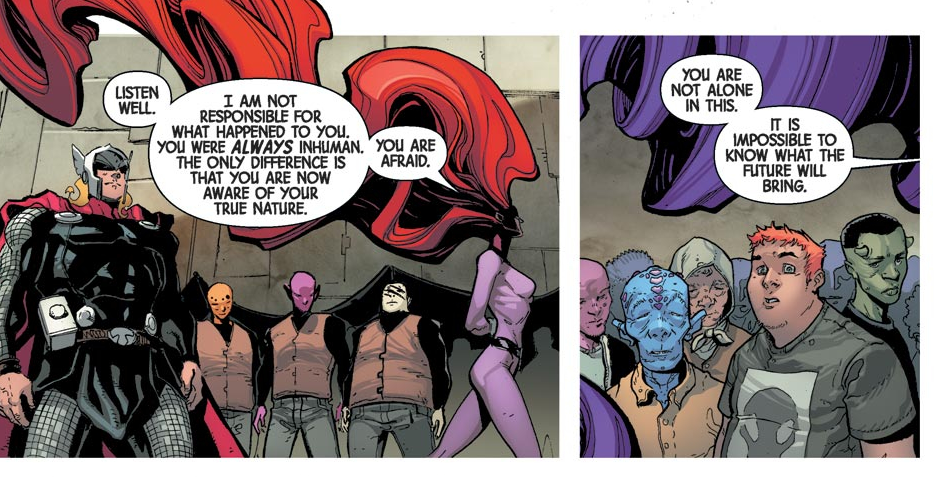 Chalk it up to professional curiosity, reader masochism or somewhere in between, but this weekend I found myself reading Inhuman #1-11 — which is to say, everything available on Marvel Unlimited — to try and see what they fuss was about when it comes to the Inhumans, and more importantly, whether there’s enough in there to justify the output that Marvel is demanding of the concept, once All New, All Different Marvel launches. (For those unaware, Inhumans will be replaced by two different series: Uncanny Inhumans, All-New Inhumans, with an additional Karnak spin-off coming, while Moon Girl and Devil Dinosaur will co-star an Inhuman, Ms. Marvel will continue to dip into Inhumans mythology as needs be and Uncanny Avengers adds “Inhumans” to its attempt to build bridges between mutants and humans.)

The short answer —or, at least the polite answer — is… I don’t get it. It’s not that Inhuman is necessarily a bad series, because it’s not, not really; it does what it does well enough, and with a certain amount of wit. However, it is a series that is both amazingly slow and depressingly generic; there’s almost certainly a point that’s being built to across the eleven issues of the ongoing series that I read, but I’m not only unsure what that point is, but fairly confident that by the time the series ends for Secret Wars in three issues, we won’t have reached it.

While Charles Soule’s dialogue has a certain amount of kick to it at times — nowhere near as much as he displayed on, say, She-Hulk, or even DC’s Superman/Wonder Woman or Red Lanterns, but there’s the occasional line where it feels as if he’s not just going through the motions — the plotting of the series is leaden and seemingly haphazard: the big bad of the series’ initial arc ends up being little match for the protagonists at the last moment, as if everyone involved suddenly had a change of heart, leading to a cycling through of dull, forgettable antagonists. 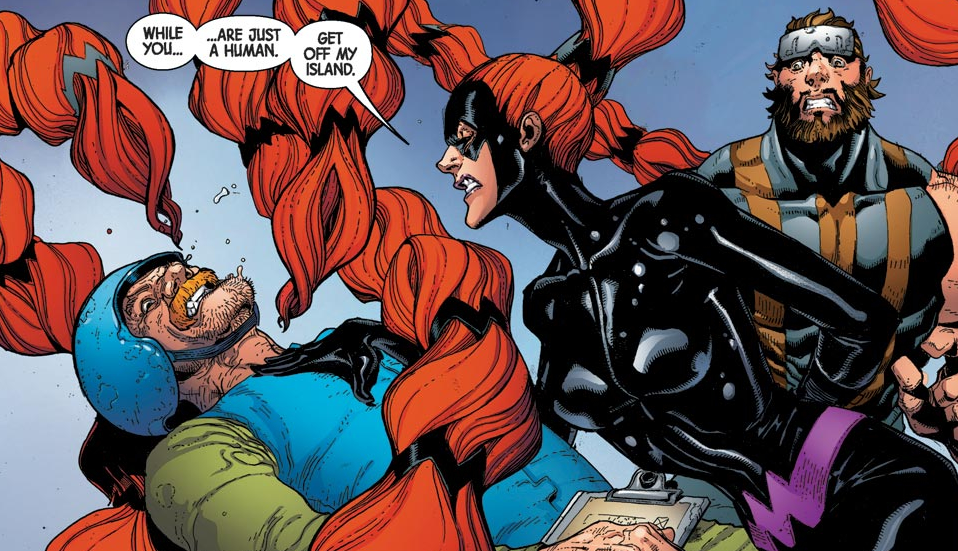 Of course, that might be the point; there’s certainly an intent to suggest that the true story of the series is the political in-fighting of the Inhumans themselves, but that is played out so uninterestingly so as to leave the impression that the characters old school fans might recognize as the Inhumans have been replaced by some particularly depressed, ineffectual teenagers. There’s a lot of sound and fury, but little-to-nothing behind it; for all the lamp shading foreshadowing, there’s no true building of tension to be felt, no political machinations with any weight to be seen. Everything is tell, with nothing to be shown.

Saying that feels like it should be a segue into talking about the art, which is difficult for me; Ryan Stegman, the primary artist on the book, is one that continually leaves me cold. He’s clearly influenced by a number of 1990s artists that aren’t my bag — there’s some Joe Mad in there, certainly (and fittingly, given that he’s the artist who does the first three issues of the series), but also a lot of John Cleary for those of you with truly long memories — with the end result that I read it as awkwardly cartoonish in terms of proportion with layouts that feel busy for the sake of busyness and lacking an internal logic to pull it all together (or pull it off, for that matter). There’s an issue of Pepe Larraz on fill-in art midway through the run, and they’re astonishingly more enjoyable overall, if only because I didn’t feel like I had to fight the art throughout each issue.

Reading these issues, I’m as much in the dark about why Marvel thinks the series deserves to be split into multiple titles as I was before I read them; not only are sales comparatively low for Inhuman, but there’s nothing in the actual work that screams “Yes, I need more space and time to tell this story!” Indeed, the opposite is true; what Inhuman needs is less space, and a significant tightening of the narrative reins and overall refocusing.

It’s obvious that Marvel wants the Inhumans to be a massive deal — the cover to the first issue, amusingly, reads “Marvel’s Latest Epic Begins Here!” unlike… well, almost any other Marvel title published in recent memory, mostly because they don’t have to tell readers that they’re big events — so much so that Matt Fraction got pushed off the book in favor of the hotter Soule, but there’s really no there there just yet. It’s a title not just in search of a concept, but also everything else: as it is, all that’s there right now is a void, an anti-book hoping that at some point it will all fall into place and mean something.

6 comments on “Graeme Wonders What’s So Special About Inhuman, Anyway”