I’ve been trying to catch up on recent Marvel series through Marvel Unlimited lately; I forget quite what the era I’m reading — the second-to-last wave of launches, basically — was called: All-New Marvel NOW!, I think? I know the most recent was Avengers NOW! and that there was also Marvel NOW! (The all-caps was, I believe, a branding decision on Marvel’s part to emphasize the now-ness of it all), but was there another one in there somewhere? I really can’t remember.

I mention this, nevertheless, because one of the good things about being so far behind is that I can read a bunch of issues on MU before making a decision one way or another on any given series: I didn’t really dig the opening issue of Magneto, say, but later issues brought me around. The first issue of She-Hulk was cute but nothing that knocked my socks off, but watching the trick repeated every issue gave the series a welcome, cumulative charm that is hard to resist. That kind of thing.

And then, there’s Iron Fist: The Living Weapon by Kaare Kyle Andrews, a book that is clearly a work of passion for the creator, and an unexpected flashback to a dark time for comics for me. It is, intentionally or otherwise, the most “Image Comics” comic I’ve read in years — and that includes the many titles actually being published by Image today that I pick up.

When I use that descriptor for Iron Fist, I’m neither talking about the publisher’s current output — perhaps obviously, given what I said above — nor even about the publisher itself, per se; what I’m talking about is the cliche of the comic book produced by the Image founders in their heyday. You know what I’m talking about: titles that are so visually-driven that everything about the writing is simultaneously the furthest of afterthoughts and wildly overwrought. (”His webbing — Advantageous!” indeed.) The school of comics that made Rob Liefeld a joke apparently forever more, and Jim Lee the co-publisher of DC Entertainment. Wait, maybe that was a Faustian pact or something. 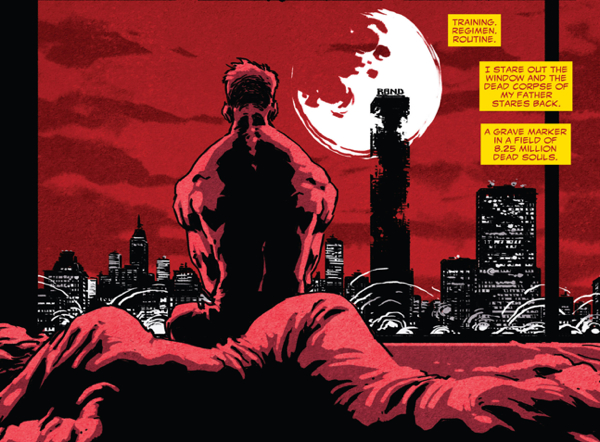 Iron Fist, though, is so very “Image Comics” in that school that it’s surprising; it’s very much not for me — as attractive as the art may be, I can’t get over the amount of Dark Knight Returns-era Frank Miller in it to fall in love with it, and the writing is far too lacking in subtlety on every single level for me to fall for it in any way. (For those wondering what that last comment means: the story revolves around a couple of retcons to Danny Rand’s origin, while also changing Rand’s characterization entirely from where he was when we last saw him so that he becomes a more intense, cartoonishly flat figure that honestly is reminiscent of little as much as the Christian Grey that appears in the 50 Shades of Grey trailers. There’s also a return to K’Un L’Un, because that mystical kung-fu Brigadoon has to be visited in every single Iron Fist story these days, for some reason. Oh, and there’s ninjas and Danny’s dad is a bad guy, because of course he is.)

But while it not being something that I enjoy isn’t exactly a surprise, the ineptitude of it on a narrative level is. There are some bold, and utterly misguided, storytelling choices in both art and writing in the first six issues of the title that I’m surprised got past the editor, whether it’s because they’re unclear, nonsensical or merely so unsubtle as to be laughable — the “DEATH” yelling out from some panel layouts, for example, being the latter and recurring in multiple issues. Do you get it yet? DEATH. SHIT IS SERIOUS, YO. Weirdly enough, the feeling I got from these issues wasn’t that Andrews was at fault for the failings of the book, despite his being responsible for writing, drawing and colors, but that the editors were. As I said before, Iron Fist is clearly Andrews putting his heart and soul into the book, and that passion really is visible on the page — but, like the Image books it feels close to, it’s something that needed a stronger editorial hand to remind him when to pull off the throttle a bit, or perhaps reconsider some of his choices. 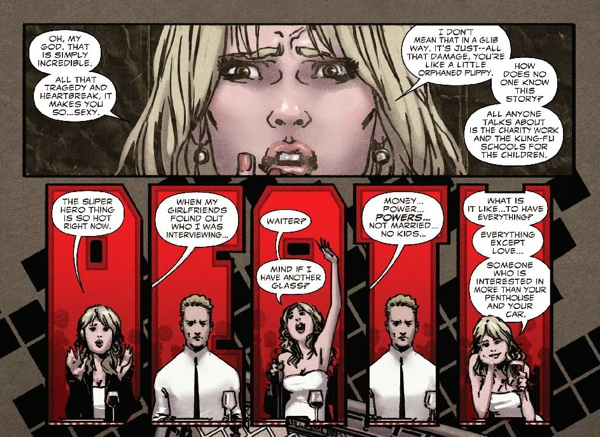 Iron Fist: The Living Weapon is something that will undoubtedly have found some fans — Miller junkies worried about how problematic he’s become in later years will find things to adore here, as will those for whom those early Image books arrived at just the right time in their childhoods — but I can’t help but feel as if the purpose it’ll serve best in the long run is reminding people of the importance of having a trusted outside eye look over things and saying, “Yeah, maybe you want to take a second swing at that.” Who would have thought that a Marvel title in today’s era would stand as a cautionary tale of too light an editorial hand?

3 comments on “Iron Fist: The Living Flashback To An Era We All Thought Long Gone (or, Graeme Is Catching Up on Marvel Comics Of The Last Year Or So)”