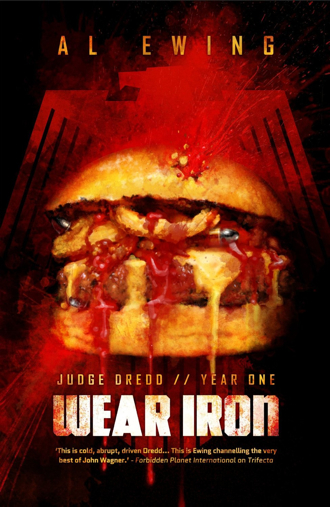 I can tell you exactly when I went from enjoying Wear Iron — the third in the series of Judge Dredd: Year One eBooks from 2000AD sister company Abaddon Books — to loving it. It’s the start of the third chapter, when the narrator decides to give a brief history of Inferno, the sport of the future that died a sudden death.

For those who don’t know their 2000AD history, it’s a fun little interlude that merely sets up the story to follow. For those who do, it’s an even-more-fun trip down memory lane, referencing not only the Inferno strip that ran early on in 2000AD’s run, but also its predecessor Harlem Heroes, while also setting up the latter Judge Dredd story “The Fatties.” It’s Al Ewing playing around in the larger mythology of the Dreddverse, and making it seem effortless.

“Fun” may not be the best descriptor for the books in this series (City Fathers and The Cold Light of Day were the first two, by Matt Smith and Michael Carroll, respectively) — City Fathers, at least, is a harder-edged crime tale, while Cold Light of Day feels very, very much like a Dredd strip from anywhere between Prog 200 through 400 or so, when Wagner and Grant were building their universe and populating it with extravagant social satires — but that’s okay; I’ll happily swap in “smart” or “addictive,” instead.

Historically, Dredd has been a strip that’s relied as much on visuals as writing; something that comes with having artists like Brian Bolland, Mike McMahon, Carlos Ezquerra and Henry Flint drawing things, no doubt. Translating the strip into prose should be problematic, as a result (“You mean we have to imagine the guy with the helmet and the big green boots kicking ass and frowning at people?”), but it goes surprisingly smoothly — the result is, perhaps, comedic in a different way than the comic strip version, but still very much recognizable as the same character and the same universe.

Part of that is down to the authors responsible — Carroll and Ewing are both regular Dredd writers in 2000AD, and Smith is, in addition to writing IDW Dredd titles, also the current Tharg the Mighty, so they’re all intimately familiar with the material — and the choice of setting for the series. As the overall title suggests, all of the stories take place in Dredd’s first year out of the academy, which has been left relatively untouched by the comic book canon and is ripe for exploration. 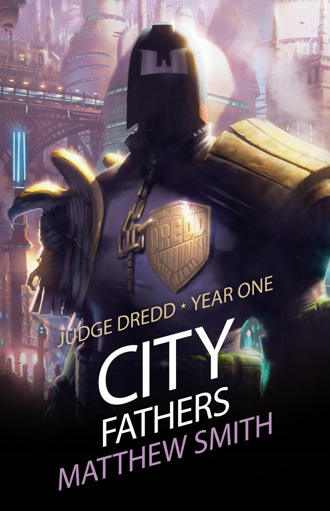 It’s also a period that allows Dredd’s clone brother, Rico, to be part of proceedings before he gets arrested and sent to Titan (Spoilers, for those who don’t know their Dredd history). To varying degrees, Rico’s a presence in all three of the stories, a corrupt clone who’s both a perfect foil for the stoic, humorless Dredd and also a time bomb waiting to go off. He’s a great character, and his appearance here will make you want to see more of him; thankfully, Carroll’s already launched a prose series about his time on Titan with this year’s The Third Law. (It also sent me back to re-read Rico’s comic book debut, Prog 30’s “The Return of Rico,” which is actually available online right here. That punchline! Early 2000AD stuff is so wonderful and so weird, looking back.)

The books, then, manage to stand alone from the comics enough to make them perfect introductory material for newcomers, while also offering enough background to make them perfect material for longtime fans who haven’t had the chance to read stories set during this time before. Add to that the nice price point — they’re about $3.50 each, making them essentially the price of a single U.S. comic book — and the people responsible and what you have is the rare comic-to-prose crossover that isn’t just entertaining for people who’re already fans of the property, but highly recommended reading for anyone who’s ever been curious about Judge Dredd in general.

(If you’re not into eBooks, a print anthology of all three titles has just been released, titled Judge Dredd: Year One Omnibus. Don’t say I don’t help the luddites amongst you — although, if you’re reading this, you’re not that luddite-y…)