Despite the fact that Graeme insists at the end of every podcast that I’m the punctual one here, I’ve fallen woefully behind. I’m not just behind on writing and posting, though–I’m behind on actually reading the damned books. And given the lunatic velocity with which DC has been releasing issues of their Rebirth titles, that has created an enormous backlog. (Like, literally enormous. Like a three-foot tall stack of books on my bedside table.)

In an effort to trim the to-read list and get some #content posted on this here site, I’m going to be writing more frequent, shorter posts while I try to get on top of this insane backlog. Today: Wonder Woman #3-9, written by Greg Rucka; drawn by Liam Sharp (3, 5, 7, 9), Nicola Scott (4, 6), and Bilquis Evely (8); and colored by Laura Martin (odd issues) and Romulo Fajardo Jr. (even issues).

The last time I read Wonder Woman, Greg Rucka was the regular writer. That puts me squarely in the target market for this particular bit of stunt casting, but there’s a bit of problem: these books kinda completely miss what I dug about Rucka’s previous run.

When that run started in 2003 (holy crap, we are all old!), the high concept was that it brought a political flavor to Wonder Woman’s adventures–part The West Wing, part Christopher Priest’s Black Panther, and all 2003. But that’s what roped me in: as a rule, I haaaaaaaaaaate the mythological elements of Wonder Woman stories. They’re fine in theory, but then it’s all weirdly ornate architecture and filigreed fonts and tortured sentence structure and my brain just switches off completely. The political stuff brought a welcome hit of modernity and relevance, and put the Themyscira stuff in the character’s background where it could add texture and depth but not add an entire Monsters Manual worth of gryphons and whatever.

That run went off the rails into a quagmire of DC continuity (hello, Countdown!), and I took that opportunity to jump off the Wonder Woman train entirely and let it sink into the muck without me. (The string of creators that followed included at least three false starts and a couple of my all-time least favorite writers, so it was as easy decision to make.)

What Rucka is doing here is pretty much entirely unrelated to that previous run; the only real continuity is the sheer Rucka-ness of it all. (Lots of tough women and other tough women and some special ops types, and a nicely invisible narrative voice that somehow still manages to be distinctly Rucka-ish.)

This opening run is divided up into past and present storylines, which is a smart way to approach a reboot: you get both the established character and a look back at the wide-eyed newbie version, all at the same time. The decision to tell those stories in alternating issues, though, would’ve been baffling if I hadn’t let a backlog build up. I tried to read the issues sequentially but wound up much more engrossed when I treated them as two separate storylines (the present day stuff in 3, 5, 7, 9, then the past in 2, 4, 6). This is a book that reads much better under its accelerated publishing schedule than it would if it were truly monthly. There’s also some mess in here about ambiguity in Wonder Woman’s memories of her own origin that feels like an “Anatomy Lesson”-ing in progress, but it’s backgrounded and seems mostly irrelevant to the actual story that’s being told.

And it’s… it’s fine. The writing is rock solid; Rucka is an old pro at this point, and whatever the changes to Diana over the years, he clearly has a firm grasp on who the character is and how he wants to portray her. The past story is a pleasant enough updating of her origins, and the present story does a nice job of tying directly back to the past to show how the years have changed everyone. From a writing standpoint, it’s … like I said, it’s fine.

I haven’t seen Liam Sharp’s art in years, possibly decades. I remember when he came onto The Hulk thinking that his characters looked like stiffer versions of Gary Frank’s, with more prominent veins. At some point in the intervening years, he has eliminated the veins, but the stiffness is still a major issue, especially in the quieter moments.  (There’s a significant kiss in #9 has to draw its emotional impact purely from Laura Martin’s hammering on the “golden nostalgia” color filter, because the body language is so impossible to read.)

Nicola Scott does much better work on her issues, although her effusive characters with their expressive gestures have the unfortunate effect of even more clearly illustrating the shortcomings of Sharp’s stuff. And Evely turns in some solid, expressive work on the high-adventure story she’s asked to handle; I’d be very happy to see her take over for Sharp in the present day stuff.

Somewhat unusually (for me, anyhow), the weakest point in the whole run is the lettering (by Jodi Wynne), which is not something that usually bothers me. (“Not true!” my brain screams, reminding me of when Pat Brousseau suddenly filled in for Tom Orzechowski on some X-book in the 1980s. Still, it’s rare enough that I can remember the specific times it’s happened.) Something about the letterforms comes across flat and uninflected, and the word balloons seem too big, leaving the letters floating in pools of white space. I got used to it as I plowed through the issues in a one-r (“one-r” is TM and copyright Graeme McMillan), but it was hugely distracting as I tried to get going.

Not as distracting, though, as the way a post-kiss Diana and (SPOILER!, I guess) Steve Trevor seem to be positioned so similarly to Superman and Batman in the ad on the next page. 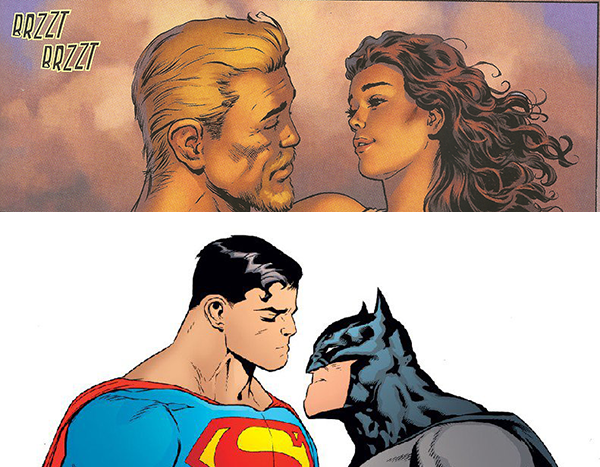 THAT was probably the most weird and unexpected thing about this whole run.