Despite the fact that Graeme insists at the end of every podcast that I’m the punctual one here, I’ve fallen woefully behind. I’m not just behind on writing and posting, though–I’m behind on actually reading the damned books. And given the lunatic velocity with which DC has been releasing issues of their Rebirth titles, that has created an enormous backlog. (Like, literally enormous. Like a three-foot tall stack of books on my bedside table.)

In an effort to trim the to-read list and get some #content posted on this here site, I’m going to be writing more frequent, shorter posts while I try to get on top of this insane backlog. Today: Sixpack and Dogwelder: Hard-Travellin’ Heroz #1-3, written by Garth Ennis, drawn by Russ Braun, colored by John Kalisz, with covers by the late, already-much-missed Steve Dillon.

I was not optimistic about this book, to say the least. As has been (exhaustively) covered elsewhere on this site,  I’ve been very meh toward Ennis’s recent output, a feeling that escalated when I found the last Section Eight series to be unreadable (literally, I think I quit at issue #3 and never had any interest in going back). Not only was it Ennis on autopilot in his “humor” mode, which is scattershot at best; not only was it a story starring one-joke supporting characters who weren’t that funny to begin with; it also felt like it somehow cheapened Hitman, my favorite of Ennis’s past works. (That feeling is ridiculous, but it didn’t help.)

So, yeah, this was not a book I was looking forward to, and for the first 15 pages or so of the first issue, it lived down to every expectation. But in the final few pages, Ennis did something I wasn’t expecting: he escalated the superhero-ness of the whole thing. Ennis’s open loathing of the tropes of the superhero genre is old news by now, but somehow him bringing in The Spectre–in full-on giant head in the sky mode–to pursue Dogwelder plays less scornful and more as the kind of sweetly bonkers thing that marks Al Ewing’s Marvel work.

And then John Constantine shows up. Preacher and Hitman (and Punisher) are the characters far more identified with Ennis these days, but he had a long, influential run on Hellblazer as well–his hard-drinking Constantine is my default, rather than the more poetic narrator Jamie Delano had crafted in the early stretch of the series. But here Ennis is writing a post-Vertigo Constantine, with a different accent (I’m guessing it’s Ennis imitating an American writer trying to do Constantine’s Scouse dialect, although I’m supremely unqualified to judge), and with a genuine grudge against the world for dumping him in with the superheroes.

And, again, to my extreme surprise, the gags landed for me. Constantine shows up riding a flying surfboard, wearing a an astronaut’s helmet and carrying a “Hellblazer .44” raygun straight out of Flash Gordon, screaming “Look what they bleedin’ DONE to me…!” and it’s over-the-top enough that I chuckled instead of rolling my eyes.

Part of what helps soften Ennis’s usual bitterness is the art: Braun’s thicker, cleaner line plays better in this setting than John McCrea’s did in the previous series. It makes the book feel more like it’s in on the joke and less like it’s actively scorning its own genre. Whoever designed the second issue’s title (“Heckblazer,” in the old Hellblazer logo font) also helps things along.

(The cover of that issue is kinda heartbreaking in light of Dillon’s recent passing, though–what may very well be his last published Constantine portrait, and the character is bracketed by Six Pack and Dogwelder.)

Three issues in, Ennis seems to have settled into a groove of gentle ribbing parody that’s landing pretty well for me, and he’s also managing to give Dogwelder some slightly deeper characterization (deliberately cliched, and also creepy and weird, but better than him being a total cipher), plus he’s sort of returning to one of the characters where he made his name. It’s far from an essential work, but it is a more entertaining one than the terrible title and preceding miniseries might lead you to believe. 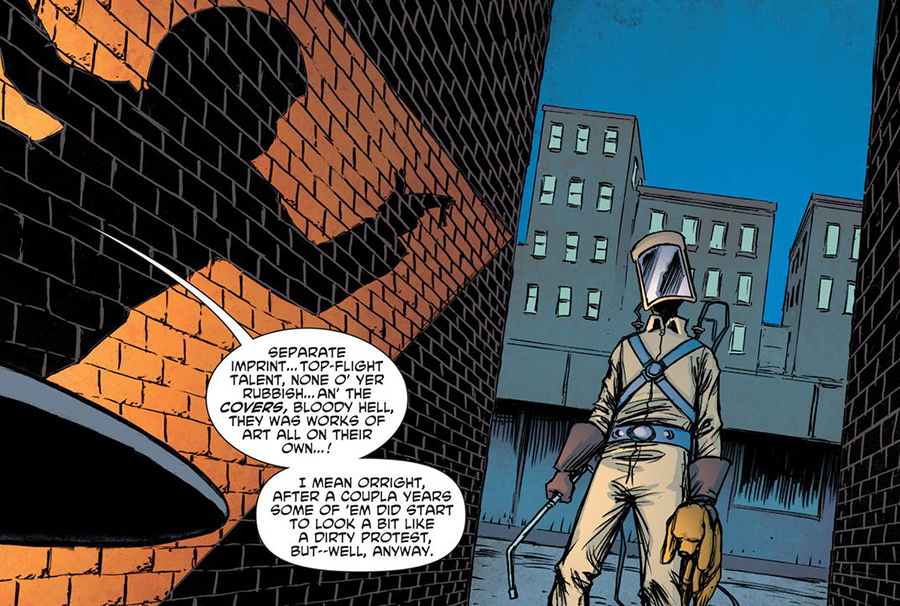 One comment on “Matt Catches Up 01: Sixpack and Dogwelder: Hard Travelin’ Heroz”