A bonus post to make up for that time earlier this month that I left you guys to go A WHOLE WEEK without my musings. This is in some ways something that’s better suited for the Wait, What? tumblr, but (a) I don’t have the keys to the tumblr, and (b) I’m a cranky old person who believes in blogging the old fashioned way, with LOTS AND LOTS  OF WORDS, and doesn’t much truck with your jiffs and giffs and vines and sharing stuff anyhow.

Also, because I’m posting this hot on the heels of my last post, make sure you don’t miss that thrilling episode of Matt Finds Something To Be Disproportionately Cranky About.

One of the great things–and, if I’m being honest, awful things–about digital comics is that you can buy them at any time. Even when your defenses are low, or you shouldn’t be allowed to make any sort of financial decision at all, no matter how minor. Say, for example, when you’re having a genuine fit of insomnia and it’s 3:00 a.m. and you can’t focus to read anything but it suddenly seems absolutely vital that you purchase Flash 80-Page Giant #1 from 1998, for no real reason whatsoever. 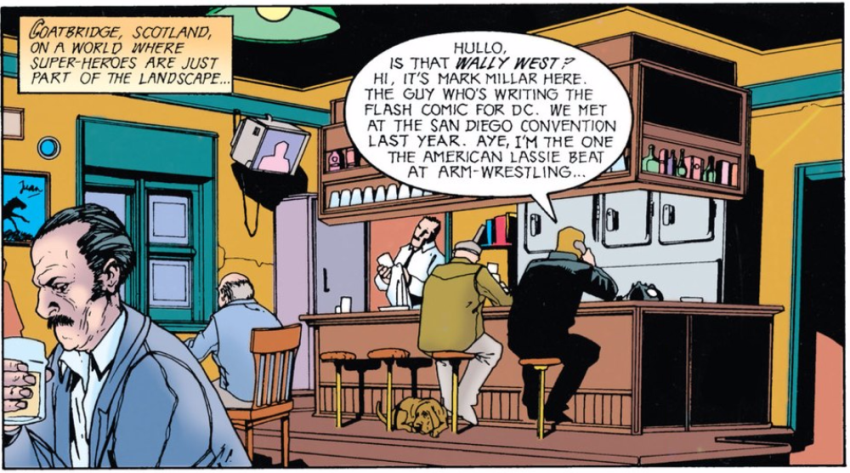 (The reason, as best I can account for it: the creator list included Mark Waid, John Byrne (writing AND drawing in his fascinating-but-terrible late-1990’s style!), Oscar Jiminez, Christopher Priest, Pop Mhan, Ethan Van Sciver, and Mark Millar, among many others. Basically it was enough guys (and, yes, they were all guys [sad emoji]) that I at least trust to put together either a good story or interesting failure that it became imperative that I buy the book immediately.

Annnnnnnd … it was a super-hero anthology book. A bunch of decent-if-unremarkable stories. Perfect for the unfocused, cotton-candy-brained insomniac mind, but nothing truly great nor anything truly awful. (Well, in the spirit of honesty I should admit that I couldn’t finish Byrne’s story, but it was just boring, not even interestingly dreadful.)

But there was this one weird thing: the Millar story, with some ropy early art from Ariel Olivetti. 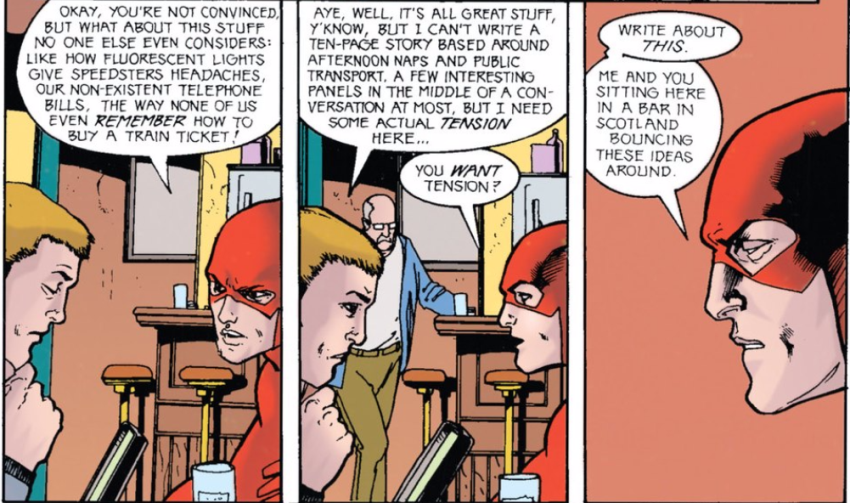 This is from 1998, a period where Millar still had some of the all-ages fun-superhero in him from his Superman Adventures stint, before he really started leaning into bratty teenage shock value,  and “adult” themes, and also where he was still regularly paired with Grant Morrison. So it’s perhaps unsurprising that he goes for a bit of b-grade metafiction in this story.

(It seems germane at this point to mention that, in my days teaching creative writing as a grad student, it became eminently clear that metafiction is the first refuge of an undergraduate on deadline. [And that, in turn, explains a large portion of my own undergraduate oeuvre.] To say we discouraged it would be a drastic understatement.)

So in this one, the character Mark Millar is a comic book writer, yes. And, yes, he talks to the Flash about what to write this very short about. But the conceit here is that he doesn’t bring the Flash to “our” world, or pretend that he’s entering the Flash’s world. Instead, it’s a story set on an Earth where there are comic book writers writing about the superheroes. (A gag that he’d return to, much more cynically, as part of a largely-forgotten series of one-shots for Marvel a year later.)

It’s … fine, I suppose. Millar goes to great lengths to squeeze in some his characteristic bonkers ideas as one-panel flashbacks, and to drop in some of the clever-slash-stonerish ideas he’s had about speedsters (fluorescent lights, maaaan!) into the dialogue, two tics that feel a bit labored. And the entire premise is never quite as clever as Millar seems to think it is. But it’s a brisk, unoffensive read, and possibly the most perfect story in the book for an insomnia episode.

The best part, though, is the last two panels in this throwaway exchange, in which Millar manages to inadvertently predict the next decade of DC’s history–including, depressingly, their occasional tone-deafness at dealing with minority characters. 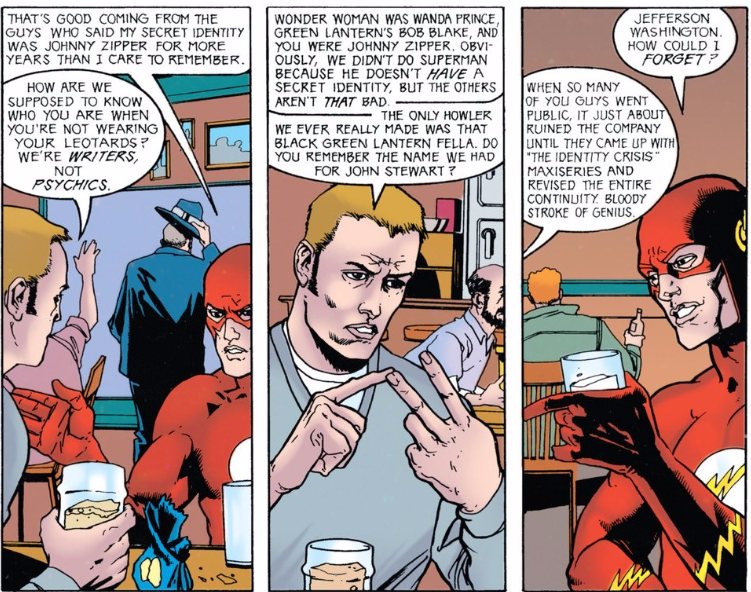 I’m exaggerating for effect, of course. (It is a Mark Millar comic, after all. Exaggeration is part of the package!) This doesn’t precisely predict DC’s future. What it does instead is manage to conflate Marvel’s then-future (all the heroes revealing their identities) with DC’s (Identity Crisis, more reboots) — and probably also shows what was in the back of Millar’s head when he was writing Civil War years later: we can always just reboot this out of existence.

(I’m not gonna lie, though: I chuckled at the “Superman obviously doesn’t have a secret identity” gag, because I’m an easy target, and also because of the whole insomnia thing. I hate being tired.)