As a concept, I like Image Comics a lot: a reasonably diverse slate of books covering a variety of different genres, by creators who have a genuine stake in what they’re doing. In actual fact, I tend to view Image Comics a lot like I view most prestige TV: as media that I always mean to consume more of than I actually do.

But I’m always curious to read what Image Comics publisher Eric Stephenson has to say about the state of comics. He’s a smart, opinionated guy, generally unafraid of pointing out potentially uncomfortable truths. Usually, those truths don’t bother me, but this recent interview Stephenson did with SKTCHD managed to baffle me on a couple of different levels.

Much of the interview is actually kinda rote: chasing collectors is bad strategy, wants to grow readers, in it for the long haul, etc. About what you’d expect, and mostly stuff that I generally agree with. But about midway through, there are couple of different points that really rubbed me wrong. 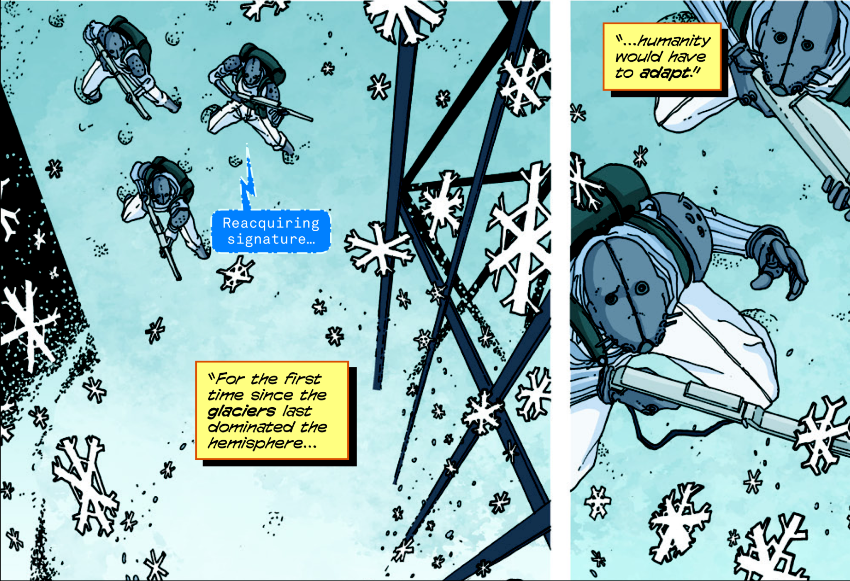 First, this, on the dangers of people waiting for the trade:

And it’s frustrating, because there are readers who will wait for the trade paperback collection or whatever, and what’s happening there is they’re essentially killing any prospect a book has of going on. A series can’t last if everybody jumps ship from the monthlies and decides they’re going to wait for the trade.

Unless I’m misreading, he’s essentially saying that the readers deciding to wait for the trade is what’s killing books. And I’m pretty sure I’m not misreading, because he goes through a few more details and then returns to the same point again:

For creator-owned or self-published comics, for comics from smaller publishers actually focused on comics — there isn’t a corporate safety net there for this stuff. There isn’t a Disney or a Warner Bros. using the comics as an incubator for movie and TV ideas. It’s comics created by men and women who, by and large, are telling the kinds of stories they want to tell, the way they want to tell them, and their efforts are being stymied somewhat by this wait for the trade mentality.

I’m just gonna be blunt: claiming that it’s the readers who are stymieing things strikes me as incredibly wrong-headed. Part of this is because of anecdotal annoyance based on my own experience, yes: of the Image books I read, I prefer nearly all of them in large chunks. The exceptions are Saga, which I buy in single issues because I find the cliffhangers to be an integral part of the experience, and The Wicked + The Divine, which I buy in single issues to avoid spoilers, but always prefer when I reread them in a chunk.

What I am saying, basically, is that the creators of these books are the ones who make the single-issue experience both desirable and sustainable.

Sometimes, as  with Saga, that’s just through sheer craft. Other times it’s extraneous stuff: I prefer Sex Criminals in collections, but I see where a lot of people flock to the singles because they like the feeling of community in the letters pages. Or the essays that Ed Brubaker’s been putting in his books. I’d buy Phonogram in every format known to man regardless, but the different backmatter in the issues as opposed to the trades certainly helps make that decision feel less wasteful.

And I bought Nowhere Men‘s return in physical single issue, despite having received a review PDF, just because I was so excited about it.

What I’m saying, basically, is that it’s not my job as a reader to keep your book alive by buying single issues; it’s the creators’ job (quite literally) to make their single issues desirable enough to keep me buying them.

(And all of that leaves aside the fact that they’re actually selling the single issues to comics retailers, not, for the most part, to the readers. It’s tough to stymie creators’ efforts when you’re not even the actual person giving them money.)

(Also, I’m noting Image books here because it’s a Stephenson interview, but it’s sure easy to ascribe the same attitude to other companies. The recent slew of Vertigo launches, for example, contained a pretty substantial number of books that gave me no reason to buy the single issues at all.)

That was the first oddity. The second was this quote, which followed immediately on the stymieing bit:

You’re right, though, there’s this obsession with first issues and what’s new that is really puzzling, especially since, if you’re just looking at it in collector terms, the first issue of a long-running series is ultimately going to be worth more than the first issue of something that isn’t around very long. It’s more short-term thinking, really — buy a first issue, flip it for as much as possible as quickly as possible. These are people who look at comics as investments, but they’re basically undermining the longterm value of the comics they invest in by only focusing on the first issues. The most valuable first issues are attached to series or characters that have staying power.

I don’t mean to show my naivete, but … is buying first issues for potential value really a thing that happens any more? The reason first issues were valuable, theoretically, was because there was a scarcity (due to age, due to no one ordering a book initially, etc.) or because there was demand (because people wanted to read the first issue and there were a finite number of copies out there).

But there’s no scarcity in comic book content anymore. (This is the reason that variant covers are the primary “collectible” filigree in comics marketing: because they’re not included with the digital copy, and they’re often not reprinted in collections.) And anyone who just wants to read the first issues to be able to understand the rest can do it digitally–from home, at midnight, while drunk, if they want.

Again, maybe this is me being naive. I haven’t worked in a comic store since 2008, and even then it was just a few hours on weekends. But no one cared about the “value” or collectability of first issues then, and that was pre-digital.

I honestly assumed–and honestly thought we all assumed–that Marvel relaunches their books to create the illusion of a jumping-on point. To convince people that they don’t need to know 337 previous issues of continuity to follow the story.

Stephenson’s assertion here doesn’t aggravate me like the previous one did, it just flat-out baffles me. Is this really what he believes? It he right? Are there really people who do this?

Ultimately, none of this matters that much. Stephenson was likely speaking off the cuff, and I’m likely over-parsing his words like a talumdical loon.

But it did seem sorta funny that the first Image book I read this week was a first issue, Snow Fall #1, written by Joe Harris with art from Martin Morazzo. I’ve liked Harris’s writing back to some X-Men limited series he did with Phil Jimenez back in the mid-Nineties, and Morazzo’s art is appealing, vaguely reminiscent of Gabriel (Locke & Key) Rodriguez’s, with touches of Frank Quitely. The book is slickly designed, by Tom Muller, and the story has a bit of an eco-cyberpunk-meets-V-for-Vendetta vibe that’s not at all unappealing.

And yet…there’s just something about this story–the way it tries to pack in backstory and characters and exposition– that makes me think it would be much better suited to larger chunks. Which left me disinclined to pick up the next issue, but intrigued enough to check out the eventual trade.

Unless, of course, my disinterest in buying the single issues stymies the trade release. I’d feel pretty guilty about that at this point. 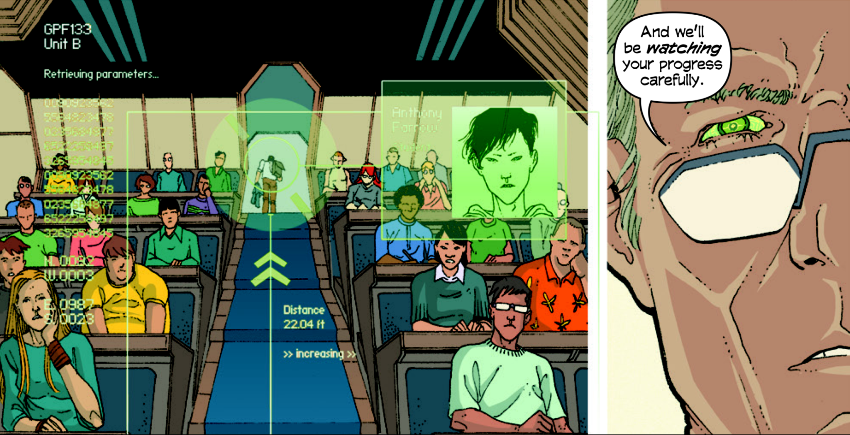