I’ve been doing a readthrough of a big chunk of the original Captain America series on Marvel Unlimited–basically, starting with the issues that kicked off the storylines that I remember from when I be 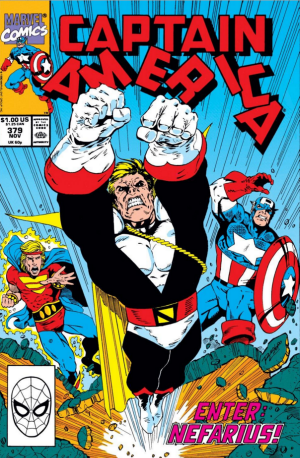 came a regular reader and then, theoretically, through to the end. In practice this meant starting around issue #300, which is where the groundwork really starts for the replacement Cap storyline (#332-#350), which was where I started reading the book in earnest. I would drop off a bit later, then rejoin for Mark Waid’s series-ending run in the mid-nineties. This time, part of the goal is to plow through the issues I’d missed.

It’s been a pretty dry exercise; most of these books are written by Mark Gruenwald and–not to speak ill of the dead–he’s a writer whose work has not aged particularly well. There’s a flatness of affect in all the characters, a weird joylessness to most of the issues (weird especially because Gruenwald has become legendary since his passing as a genuinely good, cheerful dude who had an encyclopedic knowledge of the Marvel comics he loved), and some pacing choices that seem incredibly odd by modern standards but that MUST have been clunky even back then.

That replacement Cap storyline is much dryer than I remember as well. Removed from the thrill that I had as an 11 year-old of wondering if this really WAS it and Cap really WOULD be replaced forever, it’s a storyline that features a humorless, self-important Cap wandering around Reagan’s America shouting at hippie eco-terrorists and fighting Iron Man. (I hope the upcoming Captain America: Civil War gets in some good hippie yelling along with its own Iron Man punch-up.)

Things actually pick up after (SPOILER!) Steve Rogers retakes the mantle of Cap, when Gruenwald, with then-regular artist Kieron Dwyer, send him on a pulp, Indiana Jones-esque globe-trotting quest for a bunch  of Bloodstone fragments. This kicks off a fairly strong stretch for the big, but it’s all still very comfortable stuff, toothless even at its very best (which is probably the the Acts of Vengeance crossover issue in which Magneto remembers that Red Skull is a Nazi; I would pay legit cash money to see Michael Fassbender and Hugo Weaving do a version of this issue onscreen).

Basically, nothing here shocked me until I got to issue #379, a genuinely dreadful issue guest-starring Quasar (whose solo title was written by Gruenwald), with egregiously stiff fill-in art from Chris Marinnan underneath the “I can do that McFarlane thing too, I swear!” Ron Lim cover. The issue itself was bad enough that I was, by the middle, just swiping pages to get to the end, which may be why I stopped at the letters page; I don’t know. But I did, and there it was: a letter from then-13 year-old me, and holy god is it embarrassing.

Let’s take a look together!

First, let me post in a scan of the actual letter, lest you think I am choosing to make this up to humiliate myself with fiction rather than reality. (Belated thanks to whoever laid out this letters page for splitting my letter across two columns so I had to cut and paste it to put in here. Jerks.) 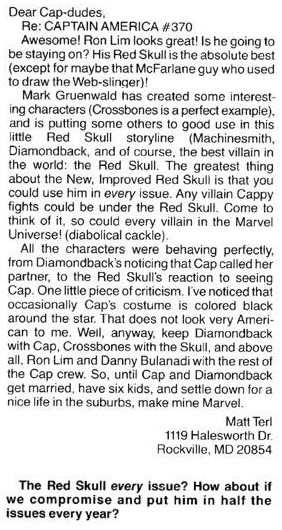 From one perspective, there’s not much to add to that. But, in longstanding bloggy tradition, let’s go through line by line and make fun of this hapless, sad writer. (Miss you forever, FJM!) Original text in blockquotes, my snark in plaintext.

I realize this is thin defense, but it was 1990 and I was 13. I’m sure Cap-dudes sounded perfectly reasonable on the heels of Batdance and Bartman and all that cowabunga stuff. Ecto-cooler for everyone! 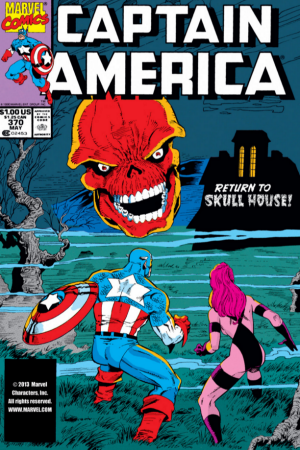 So this is interesting, because I think I wrote the letter a month early: I remember liking Cap #370, but LOVING Cap #371.

Cap #370 is the culmination of a multi-part Red Skull storyline, in which the Red Skull’s operatives free him from Magneto’s trap and take him back to Skull house; Cap and Diamondback pursue him there. But #371 is a “quiet” issue, in a way typical to the Marvel books of the era: following a long cross-over or multi-issue adventure, the cast would get to try to have some downtime (i.e. soap operatics) unencumbered by superhero action (i.e. disrupted by a villain-of-the-week not part of the overarching series mythology.)

In this case, Cap (straitlaced man-out-of-time!) finally went on a date with Diamondback (pink-haired ex-criminal); villains kept threatening to disrupt it, and Diamondback’s friends (members of the shady Serpent Society!) prevented it while staying out of sight. It’s basically a superhero sitcom dramedy, and if you’ve been reading my writing here for any length of time, you know that’s right in my wheelhouse. Maybe I wrote a letter about that one, too. Thank god it didn’t get printed.

Awesome! Ron Lim looks great! Is he going to be staying on? His Red Skull is the absolute best (except for maybe that McFarlane guy who used to draw the Web-slinger)!

Few things here: 1) I legitimately loved Lim’s art when he came on this book; in hindsight I have no idea why. At the time I thought his work looked slick and fluid, where now it reads as stiff and awkward. But looking at the splash page on that issue, of Cap’s glove and shield punching up through rubble, I can see why thirteen-year-old me was pretty goddamned psyched. KRK-TOOM! 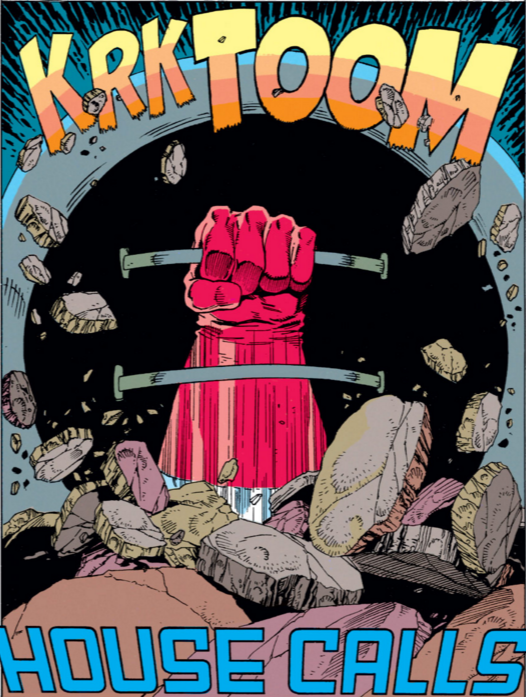 2) Remember when there was no internet and WRITING A PHYSICAL LETTER TO THE COMPANY seemed like a reasonable way to find out about changes in creative team?

3) Not only does Lim draw a good Red Skull in that issue, he draws a fun display of the Skull’s old masks, each in the style of a previous artist, as if the changes to the mask were deliberate and not just because John Byrne couldn’t be bothered to draw like Mike Zeck or whoever. I loved that kind of thing then, and still love it now.

4) Lookit me talking about art before writing, something I regularly fail at now.

5) I still like Danny Bulanadi’s inks. He’s got a bit of Terry Austin to him, lots of fidgety little lines, but he regularly gave dynamism and early-90’s sheen (for better and for worse) to pencilers who looked dry and house-style-ish else where — Ron Lim here, Paul Ryan on Quasar, etc. Look at fiddly detail on the rubble around the shield in that splash page!

Mark Gruenwald has created some interesting characters (Crossbones is a perfect example) and is putting some others to good use in this little Red Skull storyline (Machinesmith, Diamondback, and of course, the best villain in the world: the Red Skull.

Nice job not closing the parentheses, Terl. Didn’t that Apple IIe have grammar check? (No, no it didn’t.)

The greatest thing about the new, improved Red Skull is that you could use him in every issue. Any villain Cappy fights could be under the Red Skull. Come to think of it, so could every villain in the Marvel Universe! (diabolical cackle).

2) If I ever invent a time machine, after I kill Hitler and see Guns n’ Roses play live at the Whiskey, I’m going to travel to 1990 and smack younger me with a rolled up copy of one of the trillion mid-aught’s comics featuring Norman Osborn while screaming “SEE? SEE HOW THIS WORKS OUT?!??! BE CAREFUL WHAT YOU WISH FOR!!!!” Then I’ll tell him to buy Apple stock and come back home.

All the characters were behaving perfectly, from Diamondback’s noticing that Cap called her partner. to the Red Skull’s reaction to seeing Cap.

I don’t disagree with this, actually. The Red Skull, broken and near death, regains his will to live when he sees his hated enemy. It’s a nicely overwrought bit of melodrama. 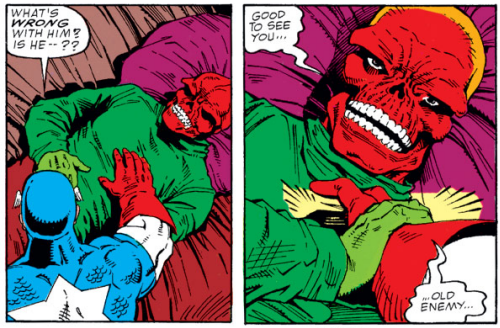 Up to this point, Cap has assumed that Skull is an imposter, and it’s only after his eyes come back to life in that second panel that Cap realizes the truth. Fun stuff! I love comics!

Me noticing Diamondback noticing Cap calling her partner is also apt, but only because Gruenwald writes the lovestruck Diamondback with the emotional depth of a seventh-grader.

One little piece of criticism. I’ve noticed that occasionally Cap’s costume is colored black around the star. That does not look very American to me.

I am 99% sure I didn’t write this. No joke–I remember seeing this letter when it ran and thinking, “I didn’t say anything about the black coloring.” I’m assuming Marvel liked to sprinkle in a little healthy criticism in overly-gushing fannish letters just to make them palatable. I can only assume the editors who had to do this at the time now look at Twitter and laugh and laugh about how they used to have to make up negativity. 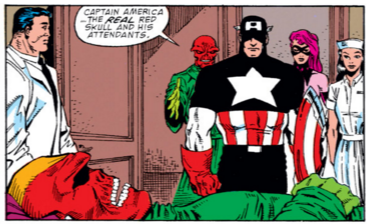 Also, way to make me look like a jingoist loon with that “not very American” stuff, editors. Thanks loads.

Well, anyway. keep Diamondback with Cap, Crossbones with the Skull, and above all, Ron Lim and Danny Bulanadi with the rest of the Cap crew.

I like to think I’m the reason Ron Lim got the regular gig. I’m quite obviously not, but I like to feel important.

So, until Cap and Diamondback get married. have six kids, and settle down for a nice life in the suburbs, make mine Marvel.

I absolutely LOVE the derisive hipster-esque mention of the suburbs here, followed by the Rockville, MD address. Rockville is just about the suburbiest suburb that ever urbed. (If you’re watching Real Housewives of Potomac, Rockville is the much-less-snotty town right next door.)

And what in the name of god was I doing putting my full address in there? Was I clinically stupid? It’s a miracle no one ever stole my house or whatever.

[They respond:] The Red Skull every issue? How about if we compromise and put him in half the issues every year?

Way not to even have the guts to respond to the criticism you yourselves inserted, Marvel. Why IS Cap’s costume colored black sometimes?!?!?? WHAT ARE YOU TRYING TO HIDE????

Anyway, the moral of this story is not to write letters to anything ever because one day three decades later they’ll get digitized and you’ll stumble across them and be gripped with an indefinable sense of skin-tightening shame combined with crushing sadness at the lost naivete of youth. Just stay at home, be quiet, and don’t communicate with anyone ever. It’s the only way to be safe. 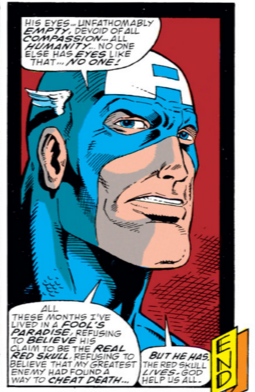