I am in awe—literal, no-lie awe—of the wild disparity between Marvel Studios and Marvel Comics. While Marvel Comics flails around and tries one desperate rebooting after another so that a hypothetical new reader won’t be “lost” or have to know a bunch of convoluted continuity, the movie side of the house basically says “Screw you, if you want to fully enjoy this year’s summer tentpole you have to have watched—and paid attention to—eighteen previous movies that would take up nearly two full days of your life. And while Marvel Comics continues to shrivel up into itself, Marvel Studios turned a nearly three-hour movie starring nineteen major movie stars WITHOUT AN ENDING into one of the biggest films of all time.

It’s become clear that, every step of the way, the comics side of the house CANNOT figure out what makes the movies successful, and it’s become equally clear that they’re gonna keep trying. Case(s) in point: this year’s two main Free Comic Book Day offerings. (SPOILERS for both books follow after the jump.)

The AVENGERS: FREE COMIC BOOK DAY issue shouldn’t irritate me as much as it does. I generally like Jason Aaron’s writing, as well as his willingness to go ultra-bonkers with the Marvel Universe-ness of it all. I enjoy Sara Pichelli’s art, and Justin Ponsor’s colors are reliably good. The story itself might even be okay, in that bonkers Jason Aaron-y way: Odin reveals to Black Panther that he was part of an ur-Avengers team a literal million years ago, and he (along with previous versions of Black Panther, Phoenix, Ghost Rider, Iron Fist, and Dr. Strange) killed a Celestial, and now that Celestial is back. (Back through Loki’s machinations, of course, because you can’t launch an Avengers team without it being Loki’s fault.)

But I can’t get past the self-consciously regressive nature of bringing back the Cap/Iron Man/Thor trio, in their original white male forms, as the only heroes who can save us all. It would be easy to say that commerce is at the core of this, bringing the comics more in line with the movies, but … I mean, is anyone REALLY sure that we’re gonna have original Cap, Iron Man, and Thor after the next Avengers movie?

If I’m being fully honest, it’s not the story, which is fine for what it is. (Where “what it is” is a thin prologue-to-a-prologue in a promotional free comic, albeit by a good creative team.) Here, look: 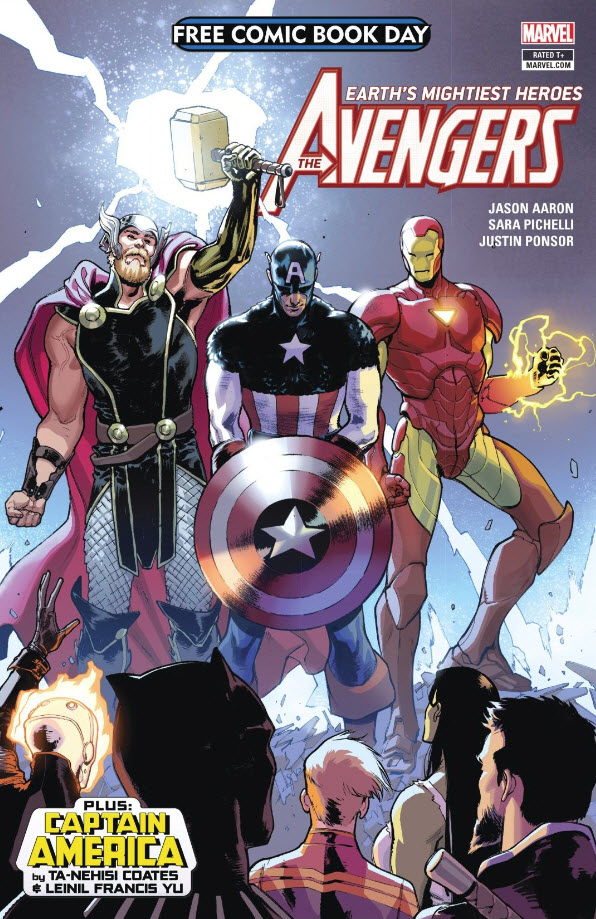 I mean, sure, it’s our beloved old-school heroes, returning yet again. But look at the optics on this thing: it’s two white guys and one guy who is completely covered up (but who is known to moviegoers around the world as a snarky super-rich white guy) standing godlike in the middle, while the Latino guy, the African king, two powerful women, and (to be fair) yet another super-snarky white guy all gaze up at them from below.

It looks, at best, like modern Marvel worshipfully welcoming the return of the white-guy status quo, and at worst like … well, like something even less good. The whole thing just left a bad taste in my mouth, probably compounded by the AMAZING SPIDER-MAN: FREE COMIC BOOK DAY book.

Because at least the Avengers had Aaron’s fondness for the weirder nooks and crannies of Marvel publishing, and the promise of some large-than-life cosmic fooferaw. The Spider-Man book, written by Nick Spencer with art from Ryan Ottley, Cliff Rathburn, and Laura Martin, promises, basically, two things: (1) If you liked Spencer’s acclaimed Superior Foes of Spider-Man series (which, it should be noted, stopped publishing four years ago), you will be happy; or, (2) If you enjoyed Spider-Man comics in the mid-to-late eighties, you will be … well, theoretically happy. You will be familiar with the situations, anyway.

Basically, this book feels like nothing so much as someone dusting off the old standards and playing them with absolutely no enthusiasm or innovation whatsoever.

This sounds hyperbolic, and I suppose it is, so instead of making sweeping statements like that, I’m gonna go through page by page and detail what I found painfully regressive on each one.

This is Marvel Comics now: actively seeking to recreate a past that’s much better in hindsight that it was to actually live through, in service to the whims of white guys who are terrified of anything changing out from under them. It’s ten pages that assert that familiar mediocrity is more saleable than even the slightest hint of novelty. It seems like Marvel Comics looked at the movie side and said, “Hey, people like this Spider-Man because he’s just like he was when they were kids!” instead of “Hey, people like this Spider-Man because he captures the spirit of the character while inhabiting a more modern world!”

In the end reading these stories basically gives me the weird, paradoxical feeling that by desperately trying to recreate the comics of my childhood, Marvel has somehow abandoned everything that interested me in their books. (On the other hand, the Invader Zim Free Comic Book Day story was spectacularly. It made me laugh and reminded me what I always liked about Jhonen Vasquez’s work without needing to feel like it was slavishly pandering to my nostalgia. You should all totally read that one if you haven’t already.)

(And also so I don’t go out on a totally negative note, here’s that panel with the webbing trick that I liked.) 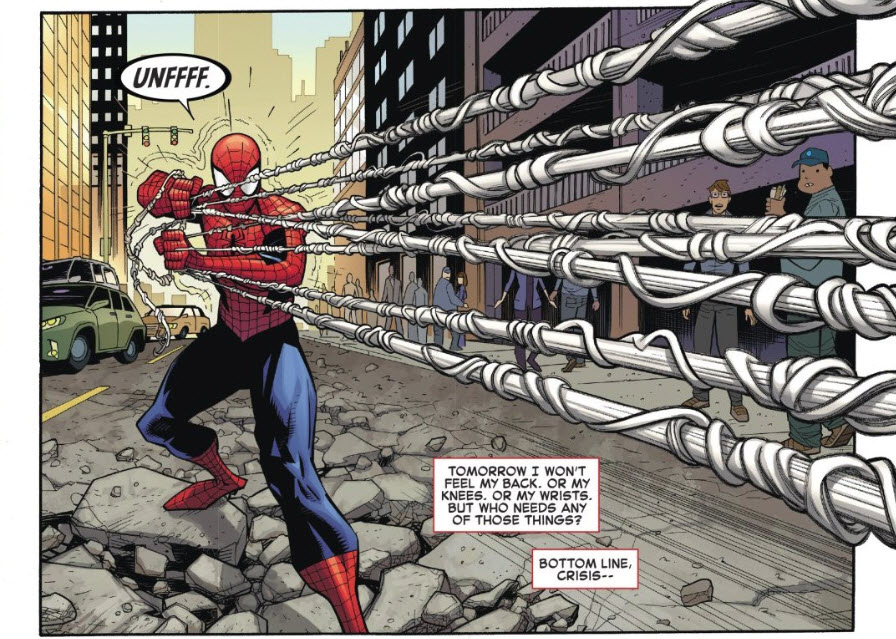 One comment on “Not Worth The Price: Matt on Marvel’s Free Comic Book Day 2018”