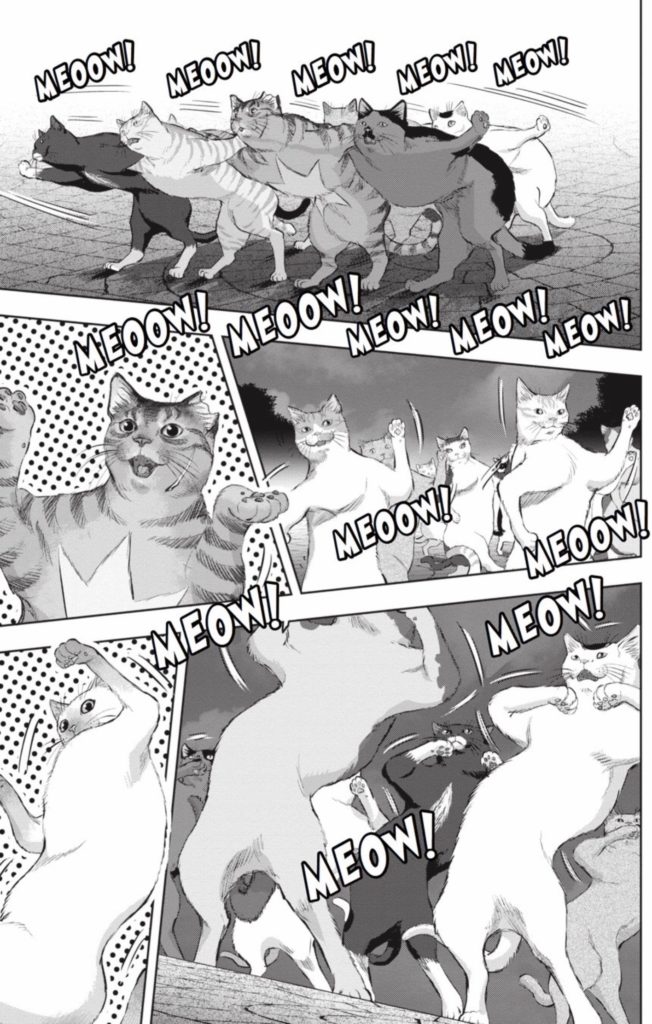 0:01-09:21:  Greetings from Graeme “Wonders of Technology” McMillan and Jeff “How can that even be?” Lester, where we start off slow, with talk about Skype weirdness, Twilight Zone pitches, and (literally) the weather (although with a comic news twist!)

09:21-15:29: We’ve done well over three hundred episodes of this podcast (when you count in the Baxter Buildings).  Have we ever talked about Garfield before?  Well. Guess. What.  Also discussed: kid’s comics; Doonesbury; vol. 2 of Nyankees, and more. 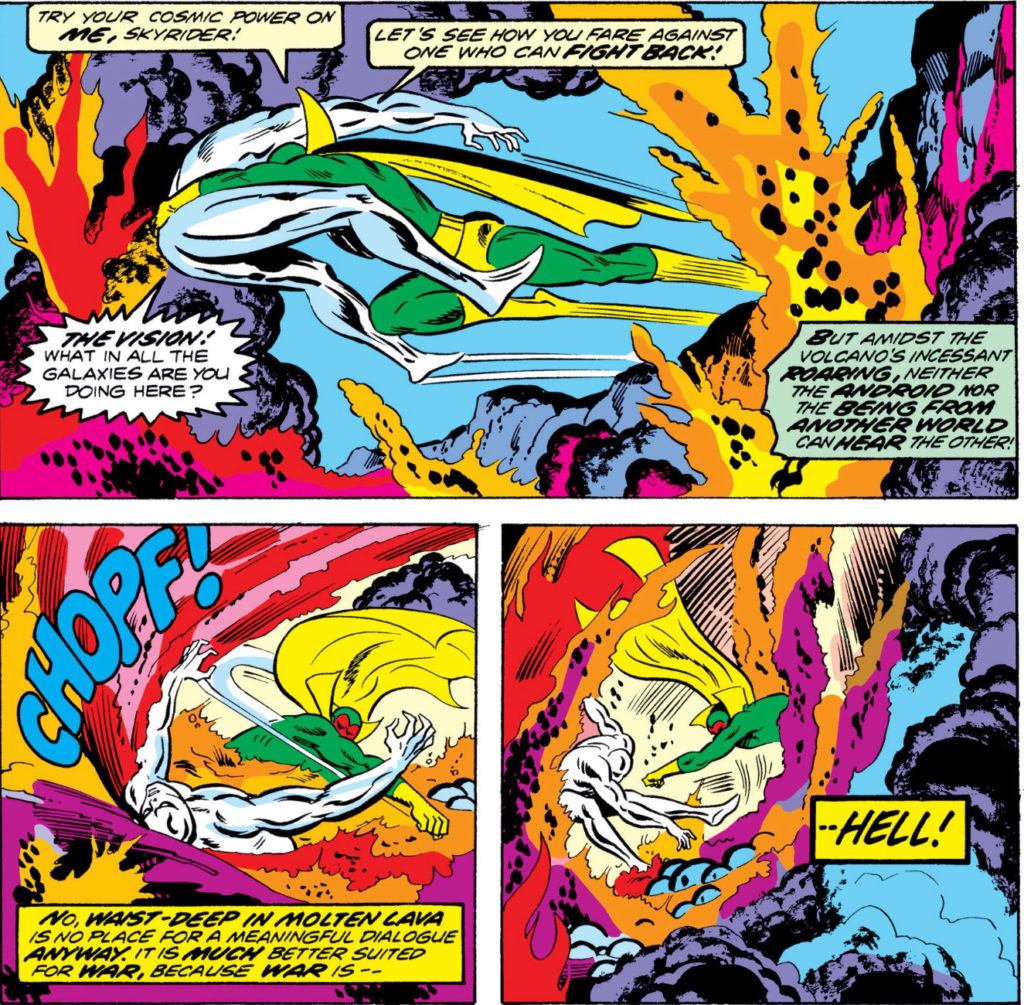 15:29-1:29:18:  Aaaaaaaaand here’s hoping you’ve seen Avengers: Endgame because Jeff has seen it and he wants to talk about *all* of it.  Please skip this discussion if you haven’t seen the film (or maybe even if you have and don’t want us mucking it up with our takes, particularly Jeff’s faux-Baudrillard nonsense) and enjoy the rest of what will be for you a conveniently short episode!  But otherwise…discussed: “finally” seeing a movie in its eighth day of release; lowered expectations; Avengers: Endgame as the cinematic equivalent of a Steve Englehart comic; Avengers: Infinity War as a Jim Shooter comic; the use of Captain Marvel in Endgame; intentionality; Taterpie’s excellent essay on Avengers: Endgame’s treatment of Steve Rogers, as well as Meg Downey’s excellent piece on the same; two video essays from Patrick Willems about the MCU; agreeing with Tony Stark; the MCU and Republicanism; the MCU and 9/11; Jeff’s theory about time travel movies; season 8 of Game of Thrones; Dave Itzkoff’s interview with the screenwriters of Endgame; The Russo Brothers’s understanding of the end of Endgame;  an excellent piece about Fat Thor and Chris Hemsworth’s Centr app; “real” movies, “blockbuster” movies, “genre” movies, and, y’know, movies. 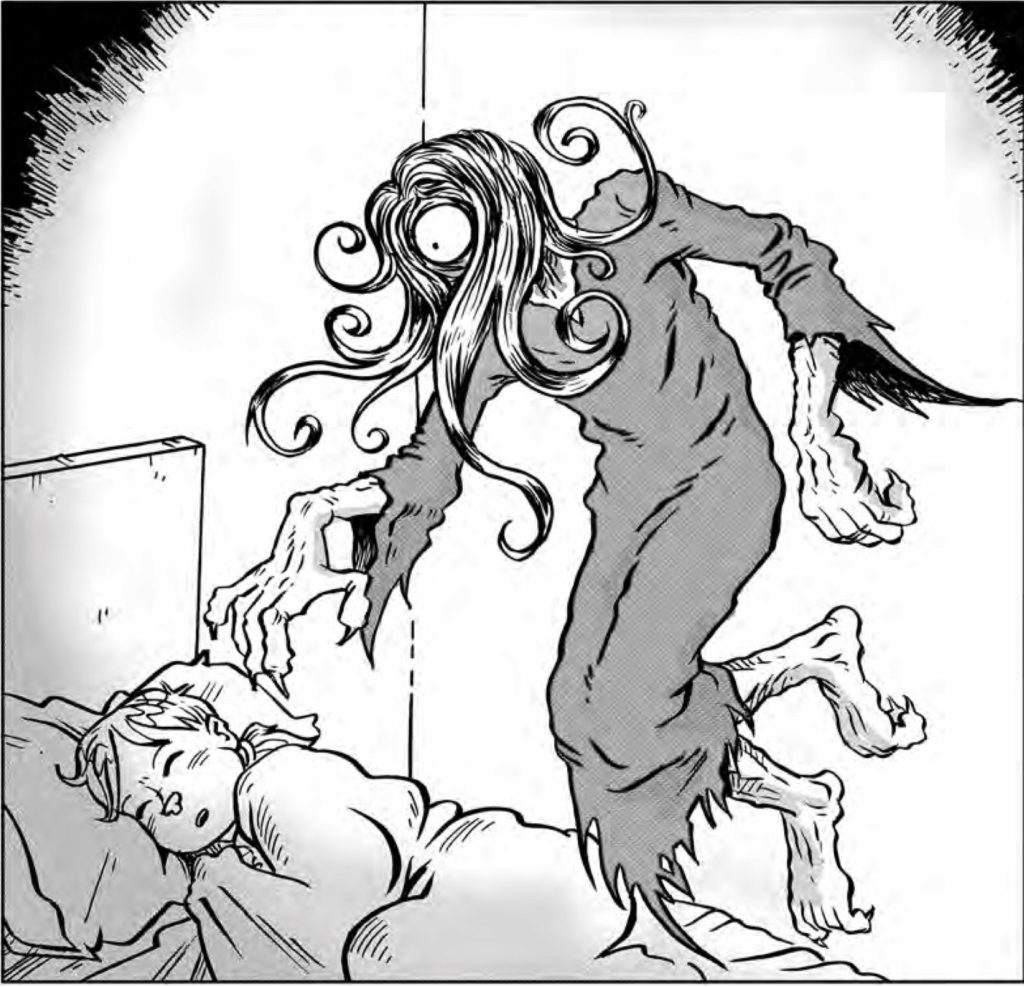 1:29:18-1:39:09: And now…comics! (Whew!)  Graeme has read a lovely batch of comics at their most comicsy, doing what the medium can do best: Dan White’s Cindy and Biscuit books; Aud Koch’s “If You Wander In The Badlands,” and the work of Molly Mendoza. 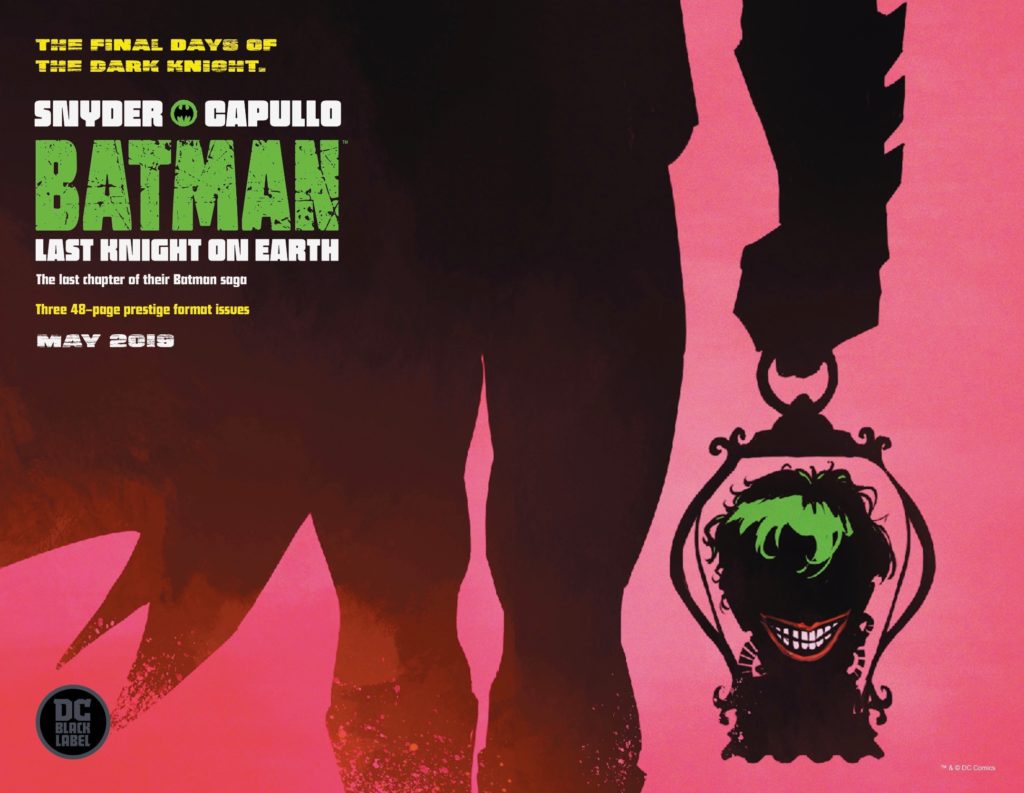 1:39:09-1:52:08: And we both read Year of The Villain, DC’s intro-on-the-cheap to their upcoming events that feature, well, villains.  Also discussed: Batman: Last Knight on Earth; Scott Snyder’s interview about The Last Knight on Earth and the free preview running around in DC comics this week; incorrect prep materials and faking your way through interviews; Hickman’s Avengers; and more. 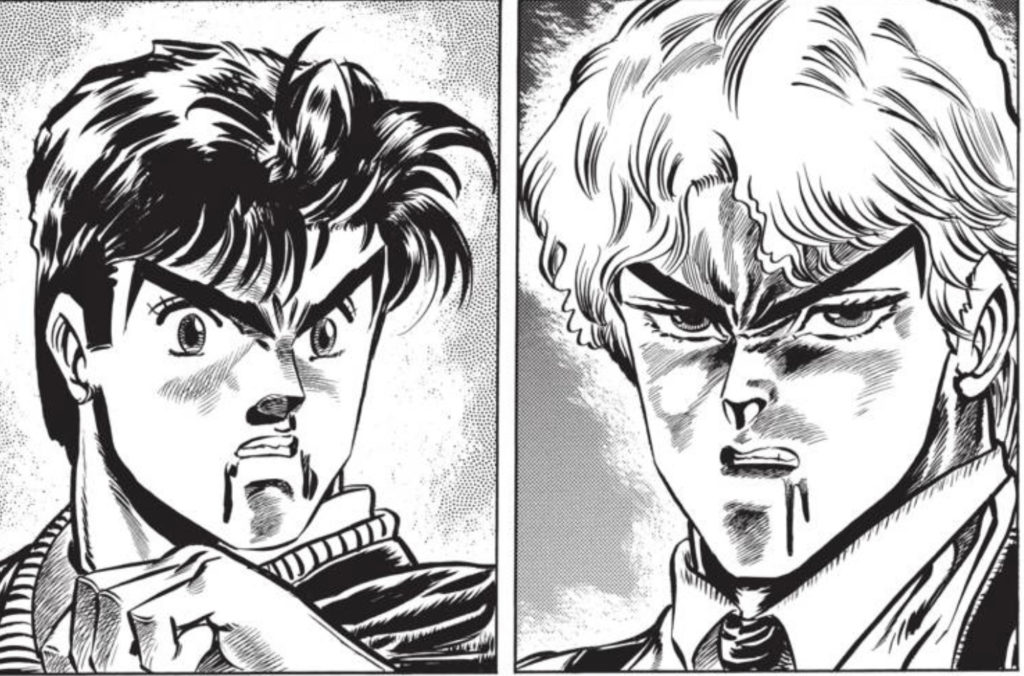 1:52:08-2:04:08: We talked about this a bit last time and we’re revisiting it again:  Jeff has read DCeased #1 and can’t tell if it lands differently in a DC Universe where continuity feels out of joint, and how much that seems to be the standard these days.  Also discussed: Female Furies #3 and #4; Savage Avengers #1; The Green Lantern #7; old issues of Detective Comics on the DC Universe app; six chapters of JoJo’s Bizarre Adventure (now available on the Shonen Jump app); Aoharu X Machinegun Vol. 1; and more. 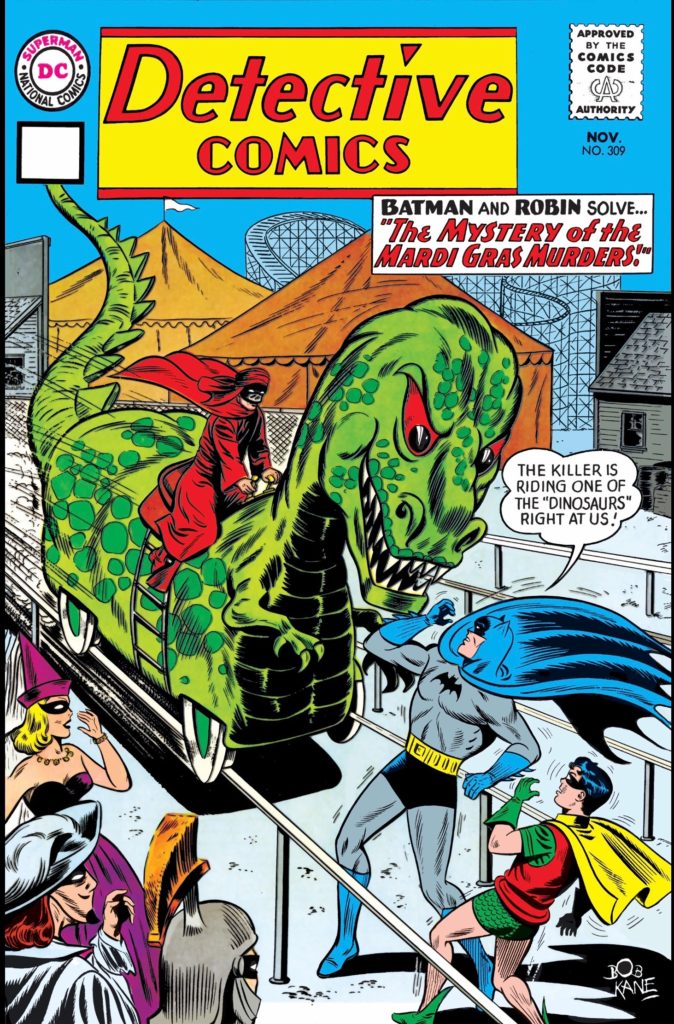 2:04:08-2:17:54:  Jeff is really enjoying the comic streaming services these days and so we return again to discussion of the DC Universe app in the wake of its first post-upgrade release of 12-months-ago comics and (thankfully!) a bunch of old Detective Comics and very old Teen Titans books.  Also discussed: our first buggy experiences while using the app; Jeff’s preference for the old junk; Graeme’s rediscovery of Countdown to Adventure and DC’s forgotten Lady Styx-verse; notably missing work on the app (only 12 issues of Kirby’s The Demon?!); mixes of scans, refinished pages, and black and white material; the fate of Wildstorm; and more. 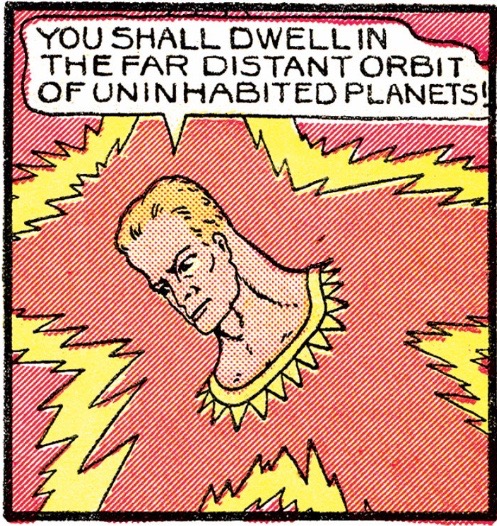 2:17:54-2:28:30: Since we’re recording this on Free Comic Book Day, Jeff feels compelled to plug his participation in Luke Herr’s FCBD bonus installment of the Exiled podcast, and the fun he had playing Stardust the Super-Wizard alongside Jean Adaser (Dr. Light); Madison Rowan (Mysterio); and Mr. Al Ewing (Kid Colt).  Don’t ask, just….buy it? Also discussed: the crunchy sound of Hammond organs and why the Internet is a Beautiful Place.
]
2:28:30-end: Look for us on Stitcher! Itunes! Instagram! Twitter together and separately: Graeme and Jeff! Matt! Tumblr, and  on Patreon where a wonderful group of people make this all possible, including Empress Audrey, Queen of the Galaxy, to whom we are especially grateful for her continuing support of this podcast.  (Also, don’t forget about Spotify!)
Next week:  Skip week! Time for Jeff’s semi-annual pilgrimage, so we will be back in two weeks for what will either be a Drokk! or another Wait, What?  (Smart money is currently on the latter.)

00:00-55:05: Greetings! But then, in under thirty seconds, Jeff drags us into the state of Marvel Comics because he knows Graeme has some thoughts on the Marvel Legacy “comic book industry changing” announcement of Friday, which involved 51 comics announced across six different websites, the social media accounts of their PR people, the occasional PR mailing and via the game-changing, high-density-information tool of …animatedGIFs, you guys! Yes, what better way to communicate plans about your much-needed initiative than the very tool most of us on Twitter use to make our “I can’t even” tweets seem interesting?    It’s a very big conversation that, if nothing else, feels like we’re a little more worried about Marvel’s future than Marvel is?  Anyway, be prepared because, as Graeme puts it, “I apologize, because I’m about to complain *a lot*!” Also discussed:  the 51 titles announced and the one missing title; our dim memories of Spirits of Vengeance; the “innocence” of Marvel Two-In-One and Marvel Team-Up; homework; whether or not anyone is really calling for Marvel management to leave; a related digression about the perception of digital comics, digital trades, and Marvel’s recent digital fire sale on Amazon; bewilderment; terror; suffering; etc. 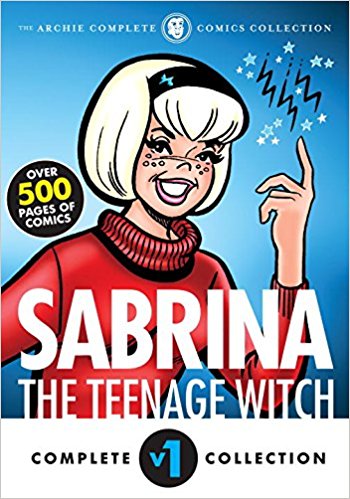 55:05-1:00:54:  But we got you through all that so we could get to this: comic books!  Sweet, sweet comic books!  First up: Graeme is very enthusiastic about The Complete Sabrina the Teenage Witch: 1962-1971 (Sabrina’s Spellbook), a book he describes in a way that reminds Old Man Jeff of a scene from The Big Chill that either isn’t on Youtube (because Jeff’s too old) or Jeff can’t find on Youtube (because Jeff’s too old).  Too bad, Jeff!   Graeme also likes the back-up story by Tony Bedard & Ben Caldwell back-up for the Wonder Woman/Tasmanian Devil one-shot. (The joke from the Bugs Bunny/LOSH joke also sounds pretty great.) 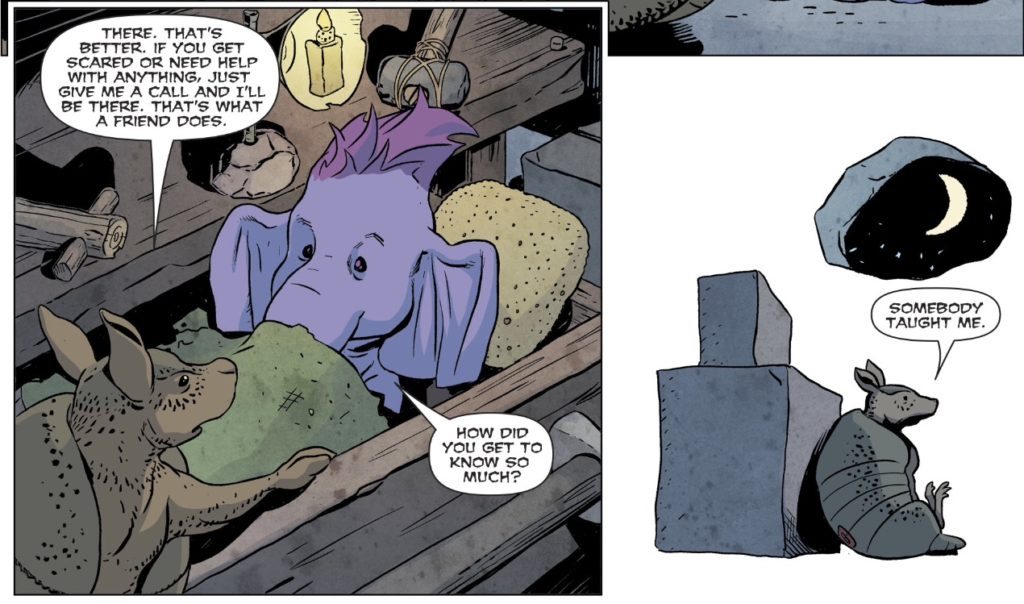 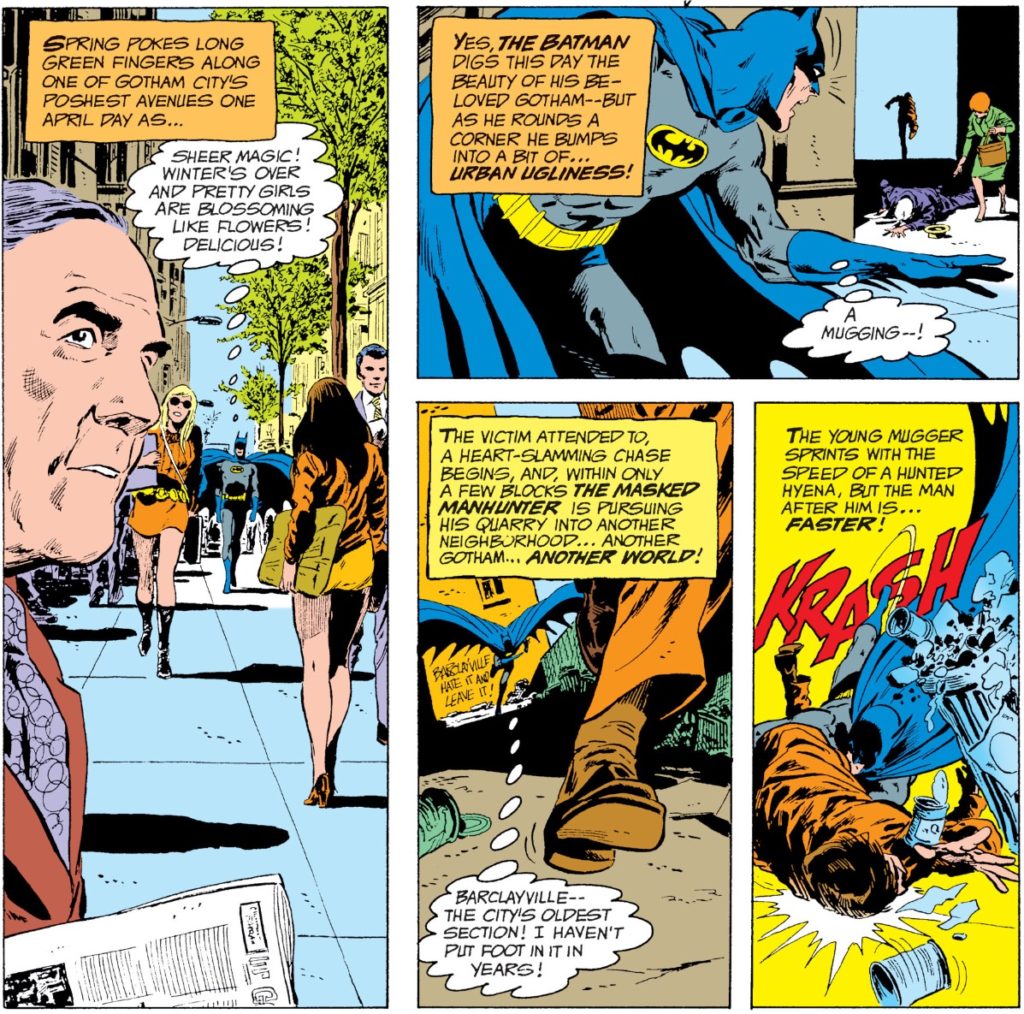 1:04:57-1:22:55: And then….Jeff has more stuff he needs to get off his chest about Tom King’s Batman, Yes, those of you paying attention will not be surprised to see our podcast’s ongoing subplot of 2017 arise yet again!  And yet this probably will be the very last take on it for some time (God willing!) as Jeff talks about reading the first two trades, “I Am Gotham” and “I Am Suicide,” looking at “The Brave and the Mold” issue, the Bat Hound storyline, and having a rough outline of an epiphany while reading those in light of his recent reading of Bob Haney’s Brave And The Bold issues. 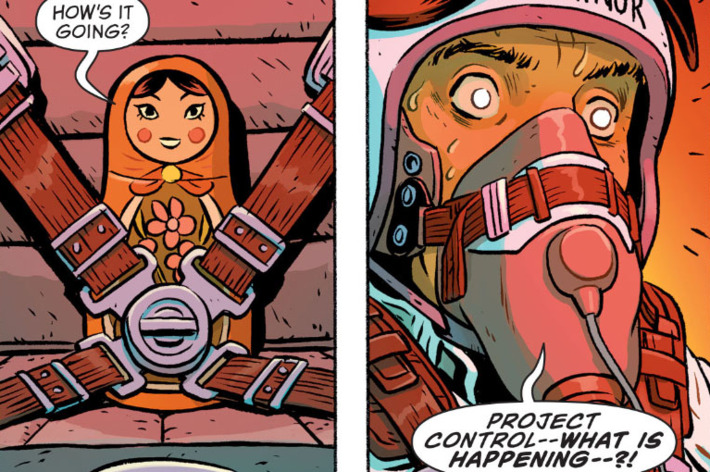 1:22:55-1:43:41: And the flipside of this, but also related in Jeff’s mind is his very recent read of Doom Patrol: Brick by Brick Vol.1 by Gerard Way and Nick Derington.  On the one hand, Jeff feels like Way is striking a great balance between being respectful of the characters and using them as a way to talk about and embody other experiences…but Jeff is also a little vexed by the way some of the more traditionally important tasks of fiction writing are handled. By contrast, Graeme has *a lot* of love for the book, and confesses to being unable to be objective about it at all.  Leading to some metacritical talk about criticism, subjectivity, and objectivity. 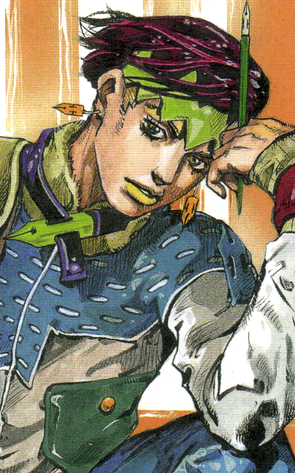 1:43:41-2:06:10: And to drag in another layer to this, Jeff read Manga In Theory and Practice by Hirohiko Araki, creator of the *amazing* JoJo’s Bizarre Adventure, and wants to not only talk about some of the practices Araki discusses in that book, but also the conflict and challenge of reading in translation the works of a cartoonist from a very different culture. 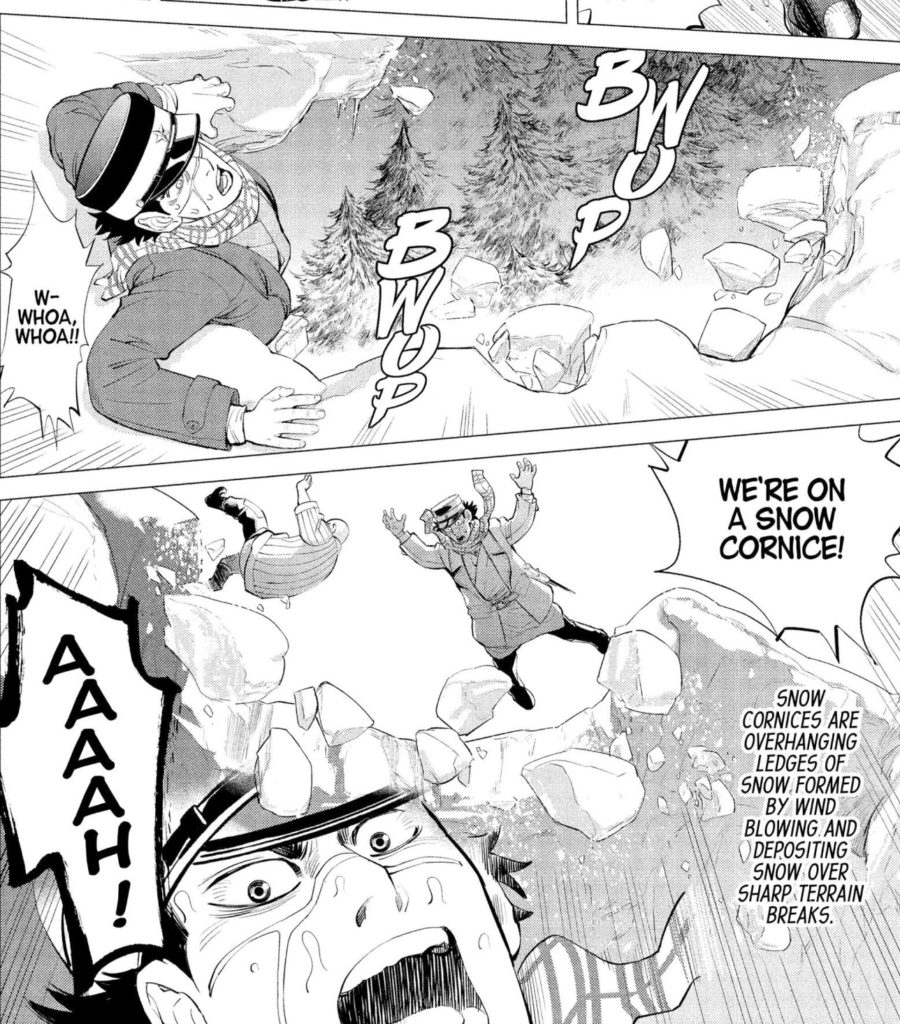 2:06:10-2:11:21: And! Jeff has read volume 1 of Golden Kamuy by Satoru Noda and it was rad.  (Even with  the fucked up thing that keeps happening to Viz’s digital manga recently.)  Is it possibly the best bear-punching comic ever?  A controversial statement, we know….but Jeff loves this book.
2:11:21-2:22:49: And and!  Jeff also really loved the book My Lesbian Experience with Loneliness by Nagata Kabi. Also discussed: Jeff’s new iPad, Comixology, GoodReader, and The Leopard of Lime Street (a.k.a. an early British attempt to do Spider-Man)….which leads us into some preliminary comments about both the Clone Conspiracy trade and Peter Parker: The Spectacular Spider-Man #1 by Chip Zdarsky, Adam Kubert, and (holy cow) Goran Parlov.
2:22:49-end:  Closing comments, but first a big shout-out to the fine folk at 2000 A.D. for putting a pull-quote from Graeme from this very podcast on Judge Anderson: Year One! Look for us on  Stitcher! Itunes! Twitter together and separately: Graeme and Jeff! Matt! Tumblr,  and  on Patreon where a wonderful group of people make this all possible, including the kind crew at American Ninth Art Studios and Empress Audrey, Queen of the Galaxy, to whom we are especially grateful for their continuing support of this podcast.
Next week:  Wait, What?, Episode 228!!

MERRY CHRISTMAS, EVERYONE! Guess who was cleaning up the wrapping paper early this morning and suddenly remembered he had a post to write?  Don’t worry, it won’t be too horribly long (or…will it?) but…