I’ve talked on the podcast about the emotional rollercoaster that was Heroes in Crisis for me; I was underwhelmed, then slightly more whelmed, and back and forth — slightly more on the under side, admittedly — until a final issue that, at the time, felt as if it earned a lot of goodwill back merely by going for a sentimental, illogical fix that felt emotionally right, even if I could see why a million fans would disagree. So, when the collected edition ended up in my mailbox, I figured, why not read the whole thing in one sitting, and see how it holds up?

So, there’s some good news and some bad news. 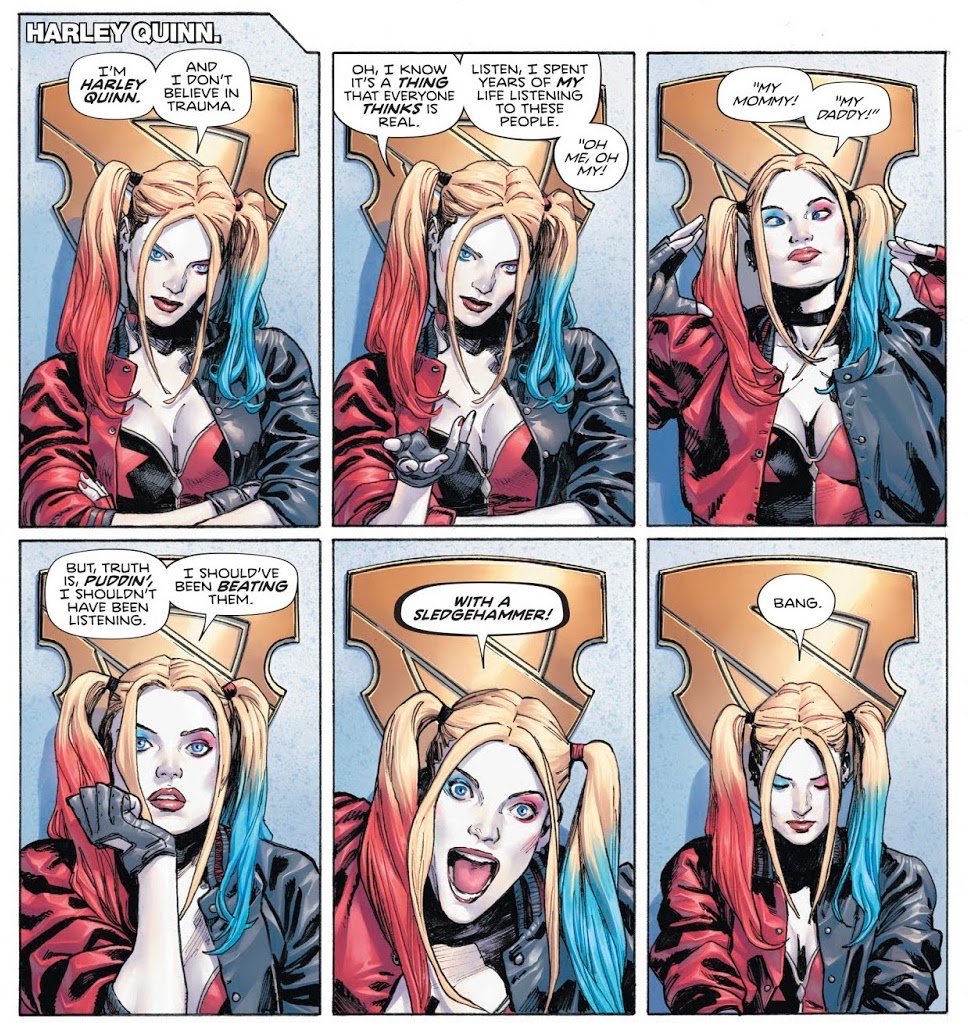 The good news is that Heroes in Crisis worked a lot better for me on this read-through, for a number of reasons; the bad news is that many of those reasons center around the idea that — having read the series through before, I was less distracted by things like, “Failing to live up to preconceptions set by the work and its promotional material” this time around. That seems… kind of like a problem…?

Let’s get this out of the way first: Heroes in Crisis fails as a murder mystery, I think, not least of all because the murders are revealed to be manslaughters with some evidence tampering after the fact. Additionally, there’s the fact that the comic is an unreliable narrator, with the reader seeing two (equally untrue) interpretations of the deaths at different points in the series, in an attempt to misdirect the reader while also setting up the eventual reveal. (The comic is actually so unreliable that it’s still unclear to me after multiple readings whether an on-panel death in the third issue points to a last-minute rewrite of the big reveal, or else another purposeful misdirect that’s setting up the big reveal. That, too, is a problem.) 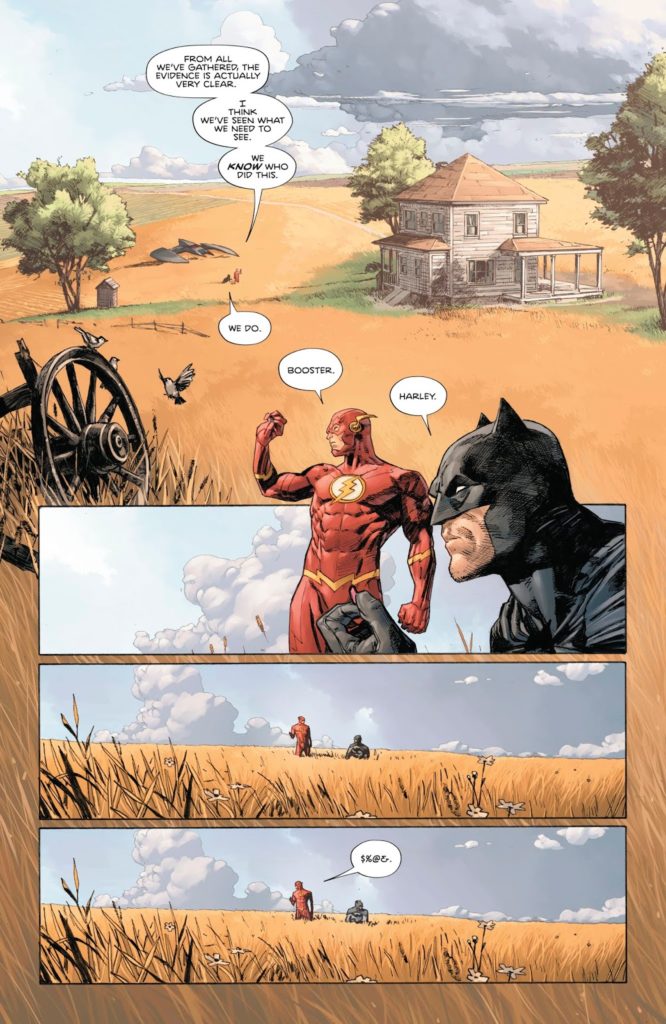 It’s also not, despite the way the book was marketed, a “big” story. Indeed, it’s almost obtusely the opposite — it’s purposefully internal and insular, and the eventual big reveal is literally, “I kept everything to myself and then when I didn’t, it killed everybody” — and, although the “trinity” of Superman, Batman and Wonder Woman appear, they’re far from the main characters of the book; indeed, Wonder Woman is barely present, which honestly feels like a mistake upon re-reading, if only to counter-balance the omnipresent maleness of the story. (It’s literally one where the phrase “Bros before Heroes” is used in two different, important, scenes.)

And yet… if you can divorce Heroes in Crisis from the context it was originally placed in — which it arguably places itself in, thanks to the fake-out of the murder mystery introduction — it’s a far better comic that it’s given credit for. Or, at least, that I was giving it credit for. There’s a subtlety at play in the writing that got lost in serialization, especially amid the expectations the series had at the time — knowing the end from the start, you can see that King actually lays clues and foreshadowing in place far earlier than it would seem; outside of the plot, there’s a lot of really nice character work, even if it can seem at odds with the way we expect some of those characters to act — and a surprising humor to the whole thing, as well, despite the obvious grimness of the whole thing.

(Re-reading this, I started to feel as if Tom King is a Marvel writer in some deep way; he writes characters as characters and eschews the good guy/bad guy dynamic that I think DC thrives on, to some extent. There’s a moral ambiguity and a need to portray everyone as flawed, rather than iconic, that feels as if it’s more suited to Marvel’s sense of mythology than DC’s. Which, of course, might be why he’s been so successful at DC. Never doubt the power of counter-programming.)

I feel like I should say something about the art, but I’m not sure what. Clay Mann is a strong superhero artist, and he draws really attractive figures that, for the most part, emote what King needs. There’s an element of female objectification throughout that’s distracting and, at times, overwhelms the moment that Mann should be selling, which is disappointing; Travis Moore is a capable fill-in to accompany Mann without the seams being obvious on some pages, and the other two artists — Lee Weeks and Mitch Gerads — are very good at what they do, and they do it capably. Yet, it’s not really an especially visual book, despite double page spreads for each title reveal that were clearly created with the intent of allowing Mann to show off. Honestly, the most notable thing about the visuals for Heroes in Crisis for me might be just how great Tomeu Morey’s colors are. 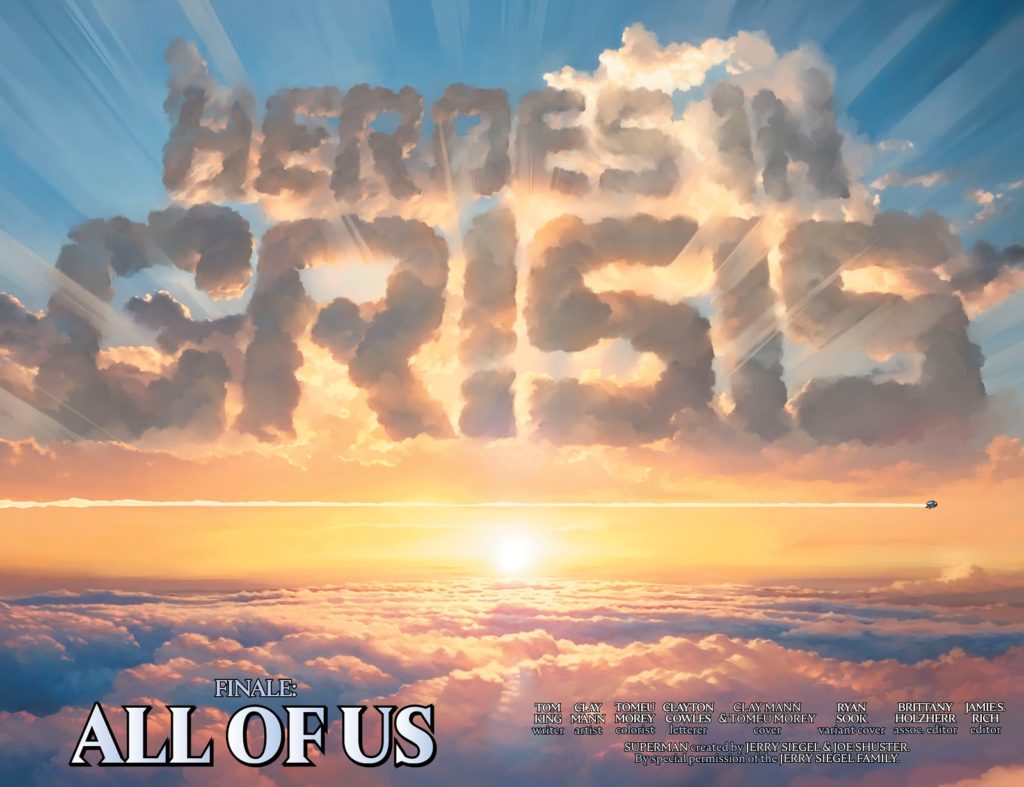 It remains a messy book, with moments where I read and thought, oh, really? even now, being more generous towards it. (Hello, the “She sent it 35 seconds ago” line, or Gnarrk quoting Keats in a full page splash.) It’s definitely overly ambitious, and could have benefited from a firmer editorial hand to keep it from losing focus. Yet, for a book about trauma and the pressure of living up to expectations — of, really, failing to live up to expectations, in many ways — it feels right, in some way, for it to be such a mess in the ways in which it’s a mess. It feels consistent, or coherent, perhaps. Right, in some way.

I’m glad I re-read it, and found new things to appreciate in it, but doing so also just made it particularly clear how Heroes in Crisis failed to measure up to what it appeared to be, when it first launched. How much that matters — how much it will matter to readers going forward, reading it separate from the pre-release hype of the original run — is, I suspect, something that will up to each and every individual reader’s personal preference. YMMV, as the kids once said, in other words.

10 comments on “The Mistakes We Made Along The Way”