PREVIOUSLY, ON THE WAIT, WHAT? ROUNDTABLE. We have exhausted about a trillion words in a look at four recent first issues: Batman & Robin Eternal #1 (DC), written by Scott Snyder and James Tynion IV with art from Tony Daniel; Survivors’ Club #1 (Vertigo), written by Lauren Beukes and Dale Halvorsen, with art from Ryan Kelly; Paper Girls #1 (Image), written by Brian K. Vaughan with art from Cliff Chiang; and Doctor Strange #1 (Marvel), written by Jason Aaron with art from Chris Bachalo and, in a backup story, Kevin Nowlan. Everything dies. You, me. Everyone on this planet. Our sun. Our galaxy. And, eventually, the universe itself. This is simply how things are. It’s inevitable. Then Jeff was mid-thought, addressing a question Matt asked about if we were being too harsh on these first issues when abject failures like Telos #1 exist.

JEFF: My hope is that if we are being overly demanding of first issues, it’s a two-way street. We’re not just being demanding of the books, we’re being at least a little demanding of ourselves, too. The stuff we write here does make me feel a little more culpable, and more willing to make sure I’m tracking my own motes. 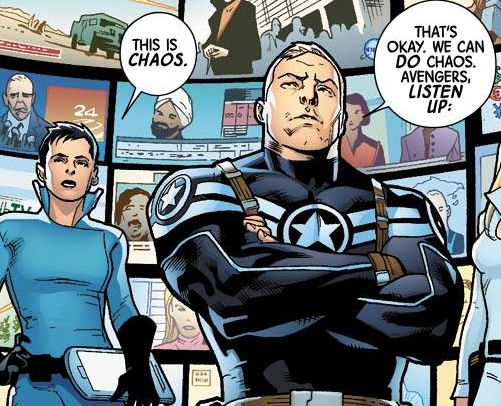 And if we do end up being a little inconsistent, at least in terms of siding with surprise and delight over our own carefully developed checklists of what makes a good issue, I think there’s a chance that’s mostly to the good. Checklists lead to formulas, and formulas lead to hackwork, no matter how expertly that work is done. (And god knows, there are times when I feel like Marvel over the last ten years has been something close to a golden age for expert hackwork.)

Leaning in to delight and surprise and charm probably puts us closer to something like honest-to-god art, and even a big formalist like me thinks that’s probably the right side of things to err on. There’s more to good art than just that, of course, but it’s harder to feel like one’s in the presence of anything like good art when you’ve just finished your third first issue with the exact same “you’d think that’s the closing twist, but here’s the real closing twist.”

MATT: I think part of the problem I’m having is that my opinion of first issues is colored really dramatically by what happens in subsequent issues. So while I was neutral-to-positive on the first issue of Southern Bastards, Jason Aaron kept turning the story away from the areas that seemed promising to me and I’ve bailed on the book.

And if I’m being totally honest and not trying to slightly hide my super-mainstream sensibilities, I should admit that one of the most successful first issues I’ve read in the last year or so—FOR ME—was Star Wars #1. It so thoroughly nailed the feeling I wanted from a Star Wars comic, applying Aaron’s rock-solid smooth-reading professionalism (Jeff, are you with me that he should probably be mentioned in the same group of reliable comics scripters we put Ennis and Vaughan into?) to the familiar characters and tropes of Star Wars so effectively that I kept hearing the music cues, and seeing the page turns as stupid wipe transitions. By issue #3 it was all feeling a little rote—still solid, but much less exciting—but I was recommending that first issue to people who had never even read comics before. 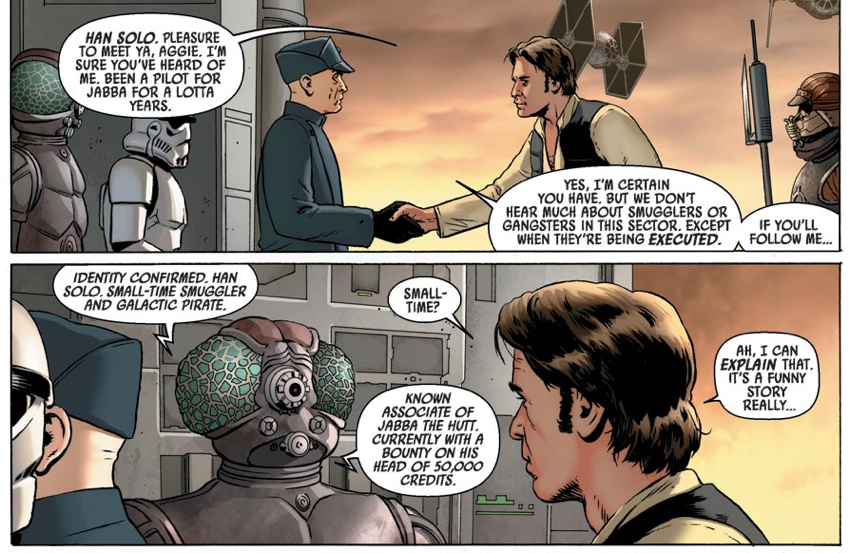 Conversely, I was really lukewarm on the first issue of Grayson—enough so that I didn’t pick up the next couple. It wasn’t until I read the Future’s End issue—on Jeff’s rave review, I believe—that I went back to read the rest.

Seems to me that there are two ways first issues can go: they can be like first albums, channelling all of a creator’s interests and experiences and enthusiasm into one amazing shot, which sometimes leaves them scrambling to match in the difficult-second-issue follow-up.

Or they can be like pancakes, where—even though I’ve been cooking the damned things for years—I still almost always have to start with a sacrificial pancake that’s 95% likely to be doomed to failure so that I can get through the rest of the batch efficiently and without error.

(I guess there’s a third option, which is first issues that are hot garbage presaging a series that’s equally appalling, but that seems—with the possible exception of Telos—beyond the remit of this roundtable.)

To wrap this thing up: do my categories track with what you both are discussing, or have we wandered so far afield of each other that we’re talking about totally different things?

JEFF: No, I think your categories are solid. And, in fact, it’s funny you mentioned Star Wars #1: that book came so close to making my “good first issues” list I was still debating it after I typed them out.

So, but, here’s the thing, I think: forty years ago, you didn’t really have first issues for popular ongoing concepts unless a licensed title moved to a different publisher, or the concept was getting a second title. Companies didn’t need to restart Amazing Spider-Man or Superman or whatever. You cancelled a book when it failed, and the character came back in a different super-team or something, and/or you moved a book to bimonthly publication status where the publisher was able to make money on it because they were spending half as much.

So part of the reason why I didn’t put Star Wars #1 on my list was the idea that, you know, it’s Star Wars. Aaron and Cassaday did a great job of capturing the perfect vibe, but that’s still not the same as having to build a vibe from scratch. And so I think there’s something resonant about you comparing albums to pancakes: one is something from which we have artistic expectations, and the other is one where we want to be filled up and satisfied. 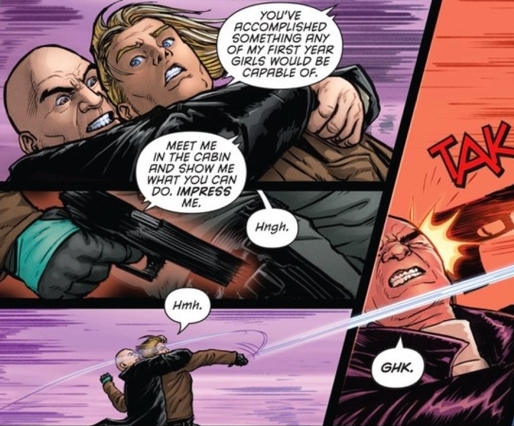 Now, I know that wasn’t your point, Matt. You’re clearly mentioning a number of different titles that by mainstream definitions would be considered “product”—there’s no way someone pitched the Grayson series first, and DC went, “huh, that’s such a good idea we’re going to launch a huge event around it about all the supervillains pushing the moon out of orbit” (or whatever happened in that damn thing). And yet, creative teams that have ambition and chops can bring enough of whatever we consider art to what is configured and run like assembly-line product.

But I do wonder if part of our confusion in definition comes from, forty years ago, Marvel and DC didn’t turn out first issues of pre-established characters (unless those characters, like Dr. Doom or The Silver Surfer or The Inhumans, had started off in the pages of another title). They did new characters and concepts, even if those concepts were as threadbare as “It’s kinda like Spider-Man, but if Flash Thompson had been the one who got the powers.” It wasn’t until the Eighties that characters’ titles got rebooted because popular creators had hot takes, and it wasn’t until after that companies started pretending they were rebooting books because popular creators had hot takes (when really it was they needed to combat sales attrition).

So, yeah. (A) Jason Aaron is so close to being in Ennis and Vaughan territory in terms of his ability to craft an engaging page-turner, and (B) first issues have to do so many things—and we don’t always know if they accomplish some of those things until much later after it comes out—it’s no surprise we’re kinda like the three blind guys describing the elephant. As a hose, the elephant is pretty great but there’s a lot to be said for it as a palm leaf.

What do you think, Graeme? Did we try to tackle too much by using these four first issues to talk about first issues generally…or is that talk going to be doomed anyway, just because first issues have so much to do? (Or was it just doomed because you guys let me get involved?)

GRAEME: A Wait, What? project ending up too ambitious for its own good and derailed by multiple diversions into different, but related, topics? But that NEVER happens! (And to prove my point by quickly derailing myself: I’m amused at the trinity of Ennis, Vaughan and maybe Aaron as utterly dependable writers, because two of those three are very hit-and-miss to me—and Ennis more miss than hit, although I can definitely see his professionalism in everything he does—and BKV has been becoming less reliable in recent series; am I the anti-matter Lester and Terl?!?)

We’re going back and forth about what first issues should do, but I think that you nailed it earlier, Jeff: it’s really about making us want to come back for that second issue, by hook or by crook—setting scenes, introducing characters and concepts or being as oblique as humanly possible aside. It can be about nostalgia—which is why Star Wars #1 worked, let’s be honest; it felt like the movies!—or the shock of the new, but there has to be that feeling that we WANT MORE, and ideally as soon as possible.

In theory, these four issues should’ve given us a spread of approaches—there were two all-new series, a revamp/reboot for an all-new, potentially ongoing series based on an existing character, and the first chapter in a limited-run mystery—and had more of a chance for, if not impressing us, then at least satisfying us…but I feel as if they all just ended up leaving us dissatisfied for different reasons. If this is a snapshot of how the current incarnation of the mainstream industry is offering to try and get new books off the ground, maybe we should be more concerned about the health of these things than we were.

One comment on “The Wait, What? Roundtable! Four Firsts (Part 3)”