Howdy, Whatnauts! Matt here. Given that AMC screened the premiere episode of their new Preacher TV show at SXSW, have released trailers for it,  and even set a proper release date (May 22, Preacherheads!), it looks like yet another unfilmable work is about to show up on screens.

But it’s been a long time since Preacher #1 hit the stands–21 years, meaning that from Preacher #1 to now is about the same amount of time as from Jack Kirby’s OMAC to Preacher #1–so this felt like an appropriate time to get with Graeme and Jeff and take another look at the first twelve issues of Garth Ennis and Steve Dillon’s Vertigo series: how it holds up, how it doesn’t, how we think it might play on TV, and so on.

If you somehow haven’t read it, the book opens as the story of Jesse Custer, a small-town preacher who speaks with the word of God; his ex-girlfriend Tulip O’Hare, now a hitman of some kind; and the roguish Irish vampire Cassidy, who is Irish and roguish. And then it goes on for 70 issues of graphic violence, swearing, ruminations on masculinity and religion, and long stretches of puerile humor. We actually wind up covering the whole series to a certain extent, enough so that if you actually haven’t read the book and don’t want to be spoiled for it (in multiple ways), you really should probably avoid this series of posts altogether. With all that said, let the preachin’ begin.

MATT: I’ll lay out my bias up front: I was a tremendous fan of Preacher when it came out. It combined so many of the things I was into in those days–cigarettes and Tarantino movies and banter and being stuck on ex-girlfriends and drinking and cursing and trying to understand what it meant to grow up–that it was one of the first comics I ever read that felt like it was written just for me and my circle of friends at the time.

But I know not everyone felt that way, so maybe we should all lay our cards on the table first. Guys, what was your previous experience like with this book?

GRAEME: My relationship with Preacher is… complicated but distant? I picked up the early issues when they were coming out after trying, repeatedly, and failing, equally repeatedly, to get into Garth Ennis’ Hellblazer run. I read so much of it — the Will Simpson issues, the early Ennis/Dillion issues, the Heartland one-shot — because (a) I wanted to be someone who liked Hellblazer, having liked the idea of Hellblazer so much, and (b) I’d loved Troubled Souls, Ennis’ first comics work, which I read when it was serialized in Crisis. Ennis, I thought, was someone who had potential but was going in a different direction from what I was interested in.

Preacher really cemented that for me. I made it through… the first four or five issues first time around? But it was the Ennis that I had no interest in — the one who could simultaneously condemn bigotry while filling his stories with subtextual gay panic and what’s since become “kinkshaming,” whose work centered around a concept of “maleness” that I found alien and offputtingly macho — and I drifted away… only to drift back years later, when my sister’s boyfriend appeared on the scene, and was a massive Ennis fan, and a Preacher fan in particular.

He loaned me the entire series, so I tried to push through and made it as far as… the 50th issue, maybe…? Before I realized that I really just had no interest in it. It was a culture that didn’t speak to me, and beyond going, “Oh, Steve Dillon’s inks are really nice this issue,” I found very little I enjoyed about it.

Which makes this a great time to revisit the series! I felt like I should put that in there so that this doesn’t seem like a total downer. 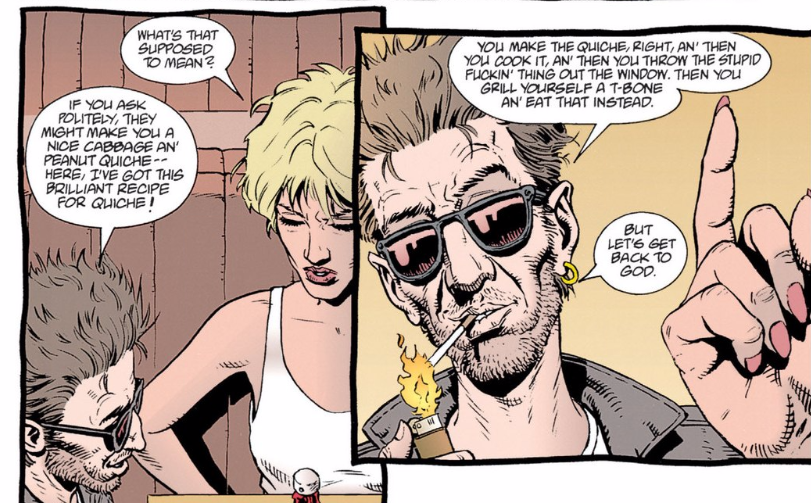 JEFF: I guess I’m in the man in the middle here, and although I’m much closer to Matt overall, it’s hard to overstate how much I *loathed* the three [?] page preview of Preacher that ran in one of Vertigo’s Specials right before the first series debuted. Even now, re-reading that sequence, the diner sequence that opens everything up—the first three pages of issue #1—sets my teeth on edge so much my skull threatens to collapse like a poorly constructed house.

It must’ve been at least two years before I picked up the first trade (because volume 1 and volume 2 were the only ones out) back in the days where I’d pick up a trade just because it seemed like everyone in my god-damned comic book store was buying the book. (Since the store was Comix Experience, chances are good everyone actually was.) And that first trade clicked, so I picked up the second which was even better, and then I was buying up the back issues, and then I was hooked on Preacher and on Ennis, when previously I’d been ice-cold on the one and coolish on the other.

As I recall, part of what made the difference—apart from the fact the book gets immeasurably better after those first three pages—is that I’d gotten at least a little bit into Joe Lansdale, and Lansdale’s mix of languorous conversations, grisly violence, juvenile humor, and modernization of the Southern Gothic tropes is about as perfect an introduction to Preacher as you can hope for. If you like one, chances are very good you’ll like the other.

In that sense, I wonder to what extent the diner scene–which is pretty clearly a signifier to the omnipresent influence of Quentin Tarantino–was an honest extension of Ennis’s intentions and how much it was an attempt by he and marketing to signal to the crowd of Pulp Fiction lovers that, again, “if you like one, chances are very good you’ll like the other.” It’s not as if Tarantino isn’t also a very sympatico creator to Ennis as well, with Hitman pushing that influence even more to the fore, but… I dunno. That diner scene clearly bugged the crap out of me.

Anyway, I liked Lansdale, and I liked Preacher. And for a very nice long time, I really enjoyed both. Ennis has other things he brings to the equation, mind you—most definitely—but that’s pretty much how it began for me.

So, Matt, now that we’ve got our bonafides out of the way, why don’t you tell us what it was like for you to revisit this all these many years later? 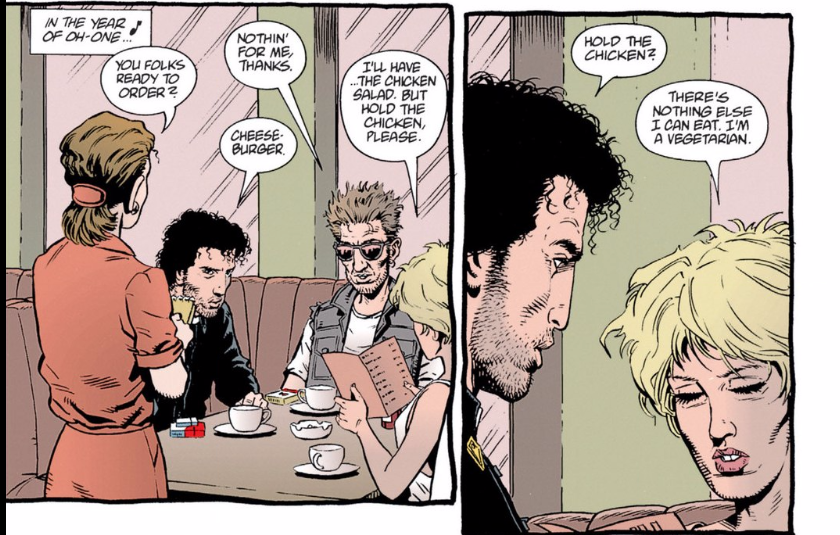 MATT: Well, the diner scene bugged the crap out of me, too! Although, as usual, my reactions come from a much simpler (i.e. dumber) place than yours do: first of all, I just flat-out don’t get where it’s taking place in the narrative. There’s things people know that they shouldn’t know yet, and/or they shouldn’t all be able to be together in the diner, and/or a whole bunch of other um, actuallys that really stood out to me this time that I had never noticed before.

(Also, Tulip orders “chicken salad, but hold the chicken, please” in a diner, which to ME means that she’s ordering a bowl full of mayonnaise and diced celery, but whatever.)

Anyhow, that’s all probably way more granular than you meant, so here’s the more accurate answer: it was fun, mostly. I’ve lately found myself mentally divvying up media that I consume into invisible and challenging — basically, how much brainwork do I have to put into reading/watching/listening to it, whether deliberate (as in The Invisibles or Infinite Jest or what the hell ever) or accidental (as in trying to decipher some comic with subpar art, or a movie where everyone’s mumbling inaudibly).

When he’s on, Ennis’s writing is, for me (and I suspect Graeme will disagree), pretty invisible, and that held up on this reread. The dialogue still (mostly) ping-pongs along well, the violence still plays somewhere between Peckinpah and Looney Tunes, and the pages kept on turning.

Honestly, it was much better than I expected — except for the things that weren’t. And hoooooooooo boy are there parts of this book that deserve the big ol’ #PROBLEMATIC label. Graeme, were you just being circumspect in referring to “subtextual” gay panic, rather than “gay panic serving as a crucial plot point”? 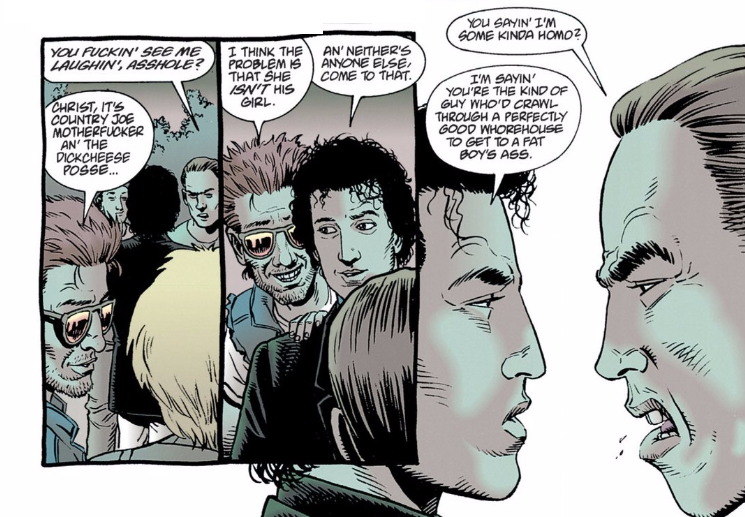 GRAEME: Yeah, I didn’t really want to follow you saying “This book was right where I was back then!” by yelling THIS IS THE MOST PRUDISH, TERRIFIED-OF-EVERYTHING-EXCEPT-WHITE-STRAIGHT-MEN-WHO-WATCH-WESTERNS PIECE OF SHIT EVER right away. But… it is, right?

It’s not just that it’s homophobic, although, holy hell, it really is — but the whole thing has an air of being written by a teenager who’s just realized no-one’s going to tell him no. Angels that swear and drink! A kid who survived a suicide attempt, but ha ha his face looks like a butt! By the time I got to “John Tool,” who actually says in his introductory monologue, “I was born with a Kick Me sign on my ass. Only one testicle… and one long run of bummers dating back to the first grade. I’m the unluckiest cop in the world,” I was ready to throw the book across the room. We actually have jokes about guys only having one ball.

If I didn’t like this book back when I first came across it — and I didn’t! — then that’s just multiplied by an unspeakable amount this time around. It’s as if Kevin Smith tried to ape Quentin Tarantino while directing a Donald Trump speech. It longs for a Great American Myth that never existed, and it hates the world around it for not living up to the lie, except with added fart jokes. I don’t get why people can lionize it, with the arguable exception of the fact of Steve Dillon’s art being nice in places.

Seriously, Jeff. You have to explain this to me.

JEFF: Oh, great. I’m the one you pick to follow that amazing bit of (essentially correct) vitriol? Thanks, Graeme.

In Part 2: Jeff explains this to Graeme! 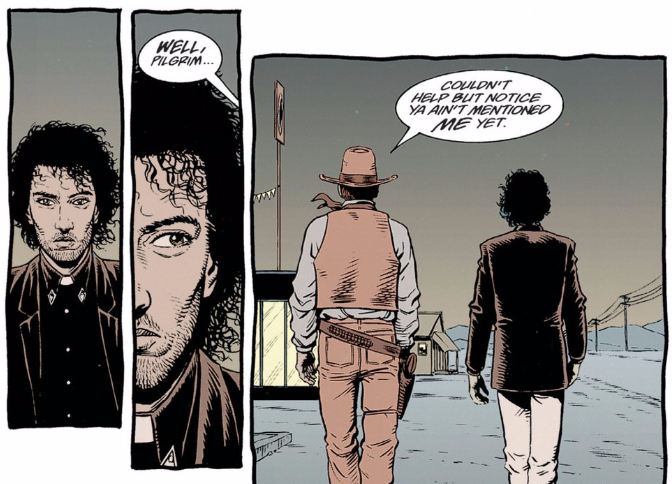 8 comments on “The Wait, What? Roundtable! Preacher, Part 1”