This is the third and final part of our roundtable discussion about Preacher, the Vertigo comic series that is somehow about to become a TV show! As such, it is a pretty terrible place to start, so let me point you at Part 1 and Part 2. And now we rejoin the conversation on me grappling with the fact that I work that I loved as a callow young man no longer has the same hold on me it once did (because I am apparently completely unfamiliar with the concept of “growing up”).

MATT: God, my ambivalence about this book that I supposedly love just grows and grows every time I contribute to this discussion.

I think the significance of the cowboys is that Ennis likes Westerns, and Westerns have cowboys, and some cowboys are good guys and some are not. There’s no doubt that Ennis has thoughts about America–the (great) Superman issue of Hitman and the (abjectly terrible) Native American issues of Hellblazer both illustrate that–and maybe he’s trying to make a larger point here, but it’s abjectly failing to land for me.

And I’ll double-down on that, and say the more weight I try to bring to it, the worse I think the book gets. I mean, I’m sure there’s a read on Odin Quincannon as an avatar of capitalism, and on his meat-humping as … I dunno, some weird Marxist parable or something … but that already-slack section of the story only works for me at all if it’s totally surface level.

To be fair, this tension is present in the actual work itself: Starr’s backstory as a bullied child and soldier dealing with real-life terrorism sits REAL uncomfortably with his body horror/comedy transformation into a giant penis, and so on. Or, to keep it to the sections we’ve read for this roundtable, the bit where Sheriff Root cuts his own dick off and then kills himself afterward sits SUPER weirdly next to the scene it inspires (of his son Arseface swearing vengeance in the rain).

So maybe it’s very simple: maybe I just don’t WANT to see anything deeper in this work, because, frankly, ugh.

Graeme, can you maybe express it a little more articulately than that?

GRAEME: Sure, hand it to the guy who hates the series.

For me, I think the two cowboys stand for exactly what you think they stand for, Jeff. It’s not that I don’t think that Ennis is trying to make a larger point about America and Americana, it’s that I think he doesn’t manage to actually make that point. Just because Star Wars has a bad guy whose name is essentially “Dark Father” doesn’t mean it really says anything about the way sons have to deal with the sins of their parents, after all. 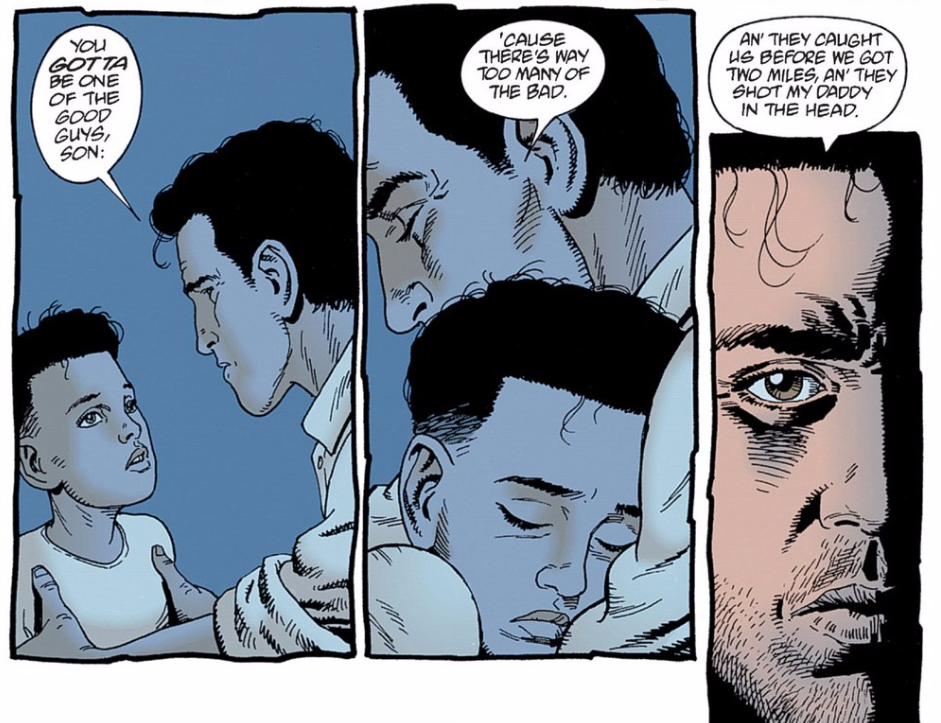 (Even more than the Kurt Cobain reference above, I suspect that comparing Preacher to Star Wars is what’s going to drive Jeff to reaching into the computer and try to throttle me.)

Look, I’m biased; I don’t see what others do in Ennis’ work, in large part because I’m not that interested in his ideas about masculinity in the modern world — which, to my eye, seems to constitute 90% of what he writes about. So I feel closer to Matt when he writes that he doesn’t want to see anything deeper in the work because it will be awkward (and awkwardly handled); there’s not a lot of subtlety to be found in Preacher — see also, “I want to explore America, I know, I’ll have a good cowboy and a bad cowboy” — and where there is subtext, it’s subtext I find myself unwilling to explore too closely, because… well, “frankly, ugh.”

JEFF: Well, okay then. This clears things up tremendously for me. (And probably everyone is relieved to know comparing Star Wars to Preacher actually didn’t make me put a hit out on Graeme because, eh, Star Wars. But ooo, yeah, that Kurt Cobain reference, Graeme! I’m still fuming.)

And to be clear, I’m not saying that Ennis does a GOOD job of handling these things–not at all!–but I do appreciate there’s an attempt to put them in there in the first place. If part of what we’re doing with this roundtable is sitting around going, “ugh, why did everyone love this stuff so much in the first place, anyway?”

I think all of our reasons so far–Ennis was as good a craftsman as you were getting back then; the ‘90s were ridiculous; people are insensitive dopes–have been good, but I do think “this book felt like it was trying to say something, and people appreciated that (even if in retrospect, what it might be saying was (a) unsophisticated and (b) didn’t work)” is also worth including as a reason.

In fact, now that I think about it, what may be the reason to re-visit Preacher is the way in which Ennis’s take here on masculinity, arguably more than any of his other takes on masculinity, is worth looking at as a study in gradations of toxic masculinity. Root, Starr, Odin Quincannon, Cassidy…and, yeah, even though I don’t think Ennis intends him this way, Jesse Custer himself is just one more dude powered by self-righteousness and violence to hide his insecurities and traumas. 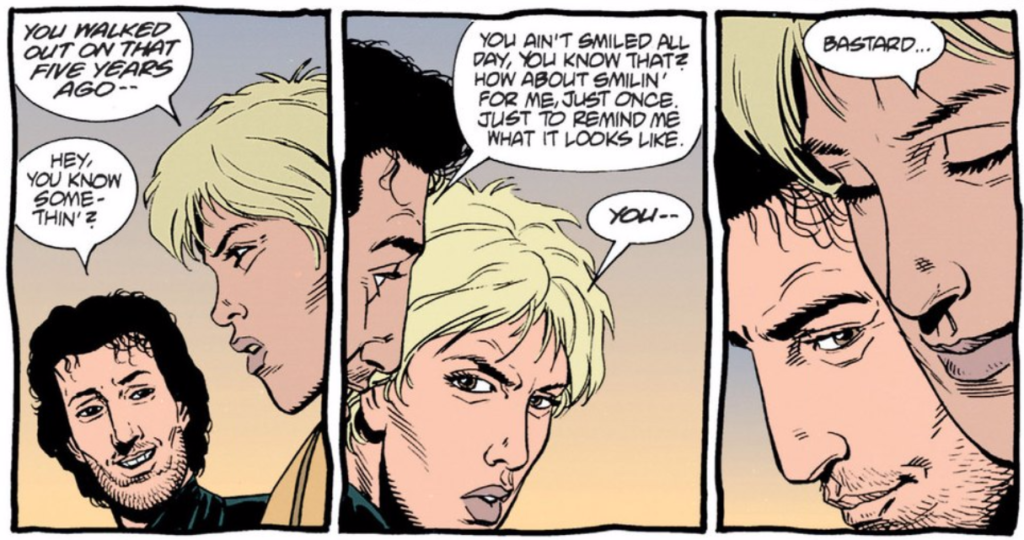 I don’t know. You guys keep mentioning The Invisibles as another disappointing re-read. Is there a third book in the sequence of “Vertigo in the 90s” we should try reading? And if so, what should it be (he asked, already knowing the answer)?

MATT: I’m pretty sure this isn’t what you meant, but Transmetropolitan’s riff on U.S. elections has actually become almost terrifyingly prescient. I’d suggest a roundtable on that, but it would probably depress me to the point where I’d want to shoot myself in the face.

And if there’s one thing I’ve learned from this Preacher reread, it’s a real short trip from shooting oneself in the face to performing terrible Oasis covers in New Orleans. And no one wants to see me do that.

And Transmet is a good suggestion, although I’m sure Jeff was hoping we could slog through Sandman one more time. (Really, though: Shade the Changing Man! Now there was a comic that thought it was saying important things, and in retrospect only seemed to be doing so because it was the ‘90s.)

JEFF: Hilariously, yes, I did in fact mean Transmetropolitan, even though neither of you thought I did? If Sandman, Shade, and Doom Patrol are the trifecta of Vertigo’s early ‘90s, surely Preacher, Transmet, and The Invisibles are the mid-to-late-’90s. Maybe we…should do it, depending on how we thought this turned out?

GRAEME: I’m going to give Jeff the win for his “People thought Preacher was saying something” as a major reason why we’re even giving this a re-read, though; this was (maybe still is, by some?) thought to be a major work of comics because it is more than just the norm, and the idea that it had something to say was a big part of that. In retrospect, I’m left unclear what that actually could be, beyond a teenager’s sense of RELIGION IS, LIKE, DUMB, AND SO IS AMERICA, YOU’RE NOT MY MOM AND DAD, but… maybe that’s important in some way. “Preacher was part of American comics’ adolescence” does have some kind of ring to it, really. 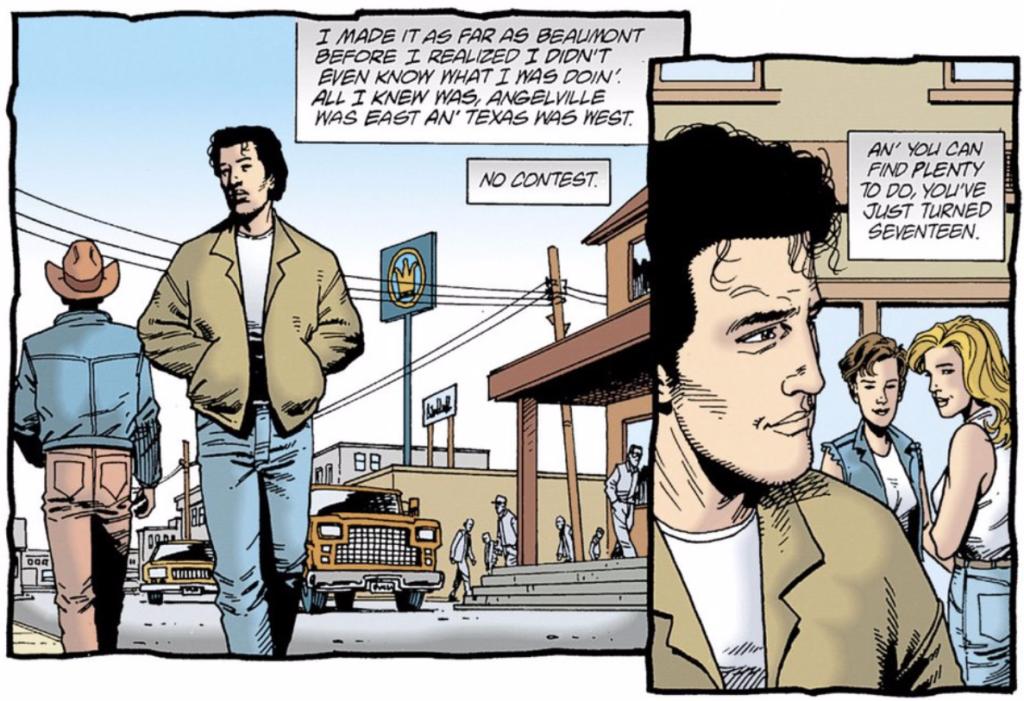 But Matt: Someday you will find me/Caught beneath the landslih-ih-ihihde…

JEFF: Oh, god. Somehow the Darkest Timeline I tried to avoid, where I brought up Oasis as a counterpoint to the Cobain shit-talking, and it all descended into a bunch of Oasis lyric quoting? Somehow it all happened anyway? We really can’t escape the ‘90s, can we?

4 comments on “The Wait, What? Roundtable! Preacher, Part 3”