A few weeks back, Jeff, Graeme and I spent like a billion words revisiting the Preacher comics. One of the primary motivators for that lookback was the then-imminent debut of the Preacher TV series; I was skeptical of the show going into the reread, and doubly so after finding how much the passage of time had dulled my fondness for the book.

“Obviously there are going to be some major changes across the board,” I wrote, full of my characteristic optimism and good cheer, “but … I’ve gotta be honest, I left this re-read thinking that if the show is even remotely faithful to the book, it’s going to be unwatchably bad. I just don’t see any way that these elements can work onscreen, no matter how they’re reconfigured.”

That’s the attitude I took into Sunday night’s public debut screening of the show’s pilot episode, and I was pleasantly surprised to find that nearly every change the creators made–and there were a lot of them–was a marked improvement over the rapidly-aging source material. It’s not a perfect show, and I’m not even 100% sure that I’m fully onboard with it yet, but #realtalk, that pilot was about 2,000 times better than I expected. Here are a few reasons why (chock full of SPOILERS, so stay away if you’re planning to go in clean).

1) They nailed the tone. I would be fascinated to hear from people who watched this show without having read the source material, because the tone is literally all over the place–from cheesy sci-fi to bonkers action movie to gag comedy to grossout humor to bareknuckle machismo–and it just expects you to come along. The general comparison for Garth Ennis’s writing is Quentin Tarantino, but this feels like it owes more to early (good) Guy Ritchie. They’ve also hit the right balance of collegiate-level religious skepticism, which was always going to be a challenge for this show. Cynical anti-religious swagger can very easily grow just as tiresome as earnest pro-religious proselytizing, and it looks like this show may have found a line to walk. 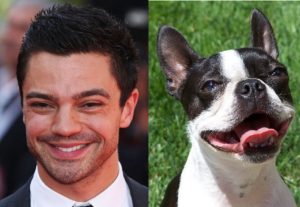 This image was already on the internet because the comparison is so obvious.

2) The casting is better than I expected. Dominic Cooper still looks to me more like a particularly friendly Boston Terrier than like Steve Dillon’s illustrations of Jesse Custer, and listening to him constantly try to mold his accent into something vaguely Texan is painful, but he does a HELL of a job with physical acting as Jesse. The way he stands, smokes, broods, and punches, it looks to me like Cooper has been studying the body language in Glenn Fabry’s covers as well as in Dillon’s pages–it’s impressive body work. Ruth Negga, whom I found uncharismatic in the extreme on Agents of SHIELD, is a delight as Tulip O’Hare, bringing more sparkle and charm to the character in a few short minutes than the Ennis-scripted comic version managed in the entire run of the series. And Joseph Gilgun…well, he looks like Cassidy, anyway. It’s unclear just how much this iteration will resemble his comic origins, so for now it’s enough that he can fake the blarney oul Oirish vampire schtick convincingly.

3) They’ve minimized the coincidences. Ennis’s writing is nasty with coincidence after coincidence, especially in the start-up to a story. (In Preacher the comic, Tulip botches a hit and stumbles into Cassidy’s car as a getaway, thus picking up a vampire at a crucial moment. She HAPPENS to see the explosion of Jesse’s church and happens to uncover him in the rubble. The Genesis spirit HAPPENS to go straight to Jesse. Cassidy HAPPENS to lead them straight to a serial killer. Jesse’s psycho family HAPPENS to spot him and Tulip. And so on and so on and so on.)

The TV show streamlines all of that, giving most of the initial main characters, including Tulip, roots in Annville, Texas, where Jesse has put out his preachin’ shingle. The power that enters Jesse now tries out a number of other hosts first. The only real coincidence is Cassidy dropping into this particular situation–but any decent story can sustain the weight of one coincidence. It’s the endless daisy chain that can grow tiresome.

4) They’ve modernized the attitudes. The women in this show, even the supporting characters, are identifiable as actual human women. We make it through the first episode without any notable instances of homophobia or belittling of mentally handicapped people. Even idiot Sheriff Hugo Root has the bulk of the racist invective excised from his conspiracy theories. Jesse feels far more tortured and troubled onscreen than he does in the book, and it serves to add depth to a character who could very easily trend toward superheroic.  (For most shows, “They don’t do anything overtly racist” wouldn’t be a triumph, but this is Preacher.)

5) They eliminated John Wayne, at least so far, along with some other clunky elements of the book. Look, let’s be honest: the John Wayne device seemed kinda cool at first in the comics, but even there it quickly became tiresome. Onscreen, it makes much more sense to be having Jesse flashing back to snippets of advice from his dead dad, rather than channeling an even more #problematic iteration of the device from True Romance. They’ve also, thus far, eliminated the thing where Jesse inadvertently obliterates his entire congregation, which saves me from having to root for a guy who starts off the series by blowing up a hundred-odd churchgoers. By casting Ruth Negga, they’ve eliminated the “three straight white leads” issue, and they’ve also stripped out Tulip’s failure as a hitperson, instead making her a hypercompetent MacGyver-esque hero to local children.

6) They’ve made Arseface less awful, maybe. At a bare minimum, they’ve created an Arseface who functions as an actual character with something approximating a normal understanding of the world around him, rather than Ennis’s running joke of a character who behaved however the plot required (innocent, angry, competent, idiotic, etc.). I’m still not sure the character serves any real point in the story, but at least there’s the possibility now.

So….. Again, many of these changes are specific and minor. Others are so massive as to not even be changes, but wholly different approaches to a common concept. But each of them, I think, has been as good a decision as the showrunners, writers, and directors could possibly have made. I’m not totally sold yet, but I’m much, much closer than I expected to be after our Roundtable. (And I should mention in full disclosure that it’s been one of those shows that sticks with you–in the time between watching the episode and publishing this, I’ve enjoyed ruminating over the show, and considering it on a deeper level. Basically the last line of this piece is much more positive now than it might’ve been if I’d rushed to post Sunday night. Now let’s see if episode 2 loses all that good will by introducing a HILARIOUSLY effeminate gay character or something!)

One comment on “The Wait, What? Roundtable Solo Follow-Up! Preacher, The TV Pilot”