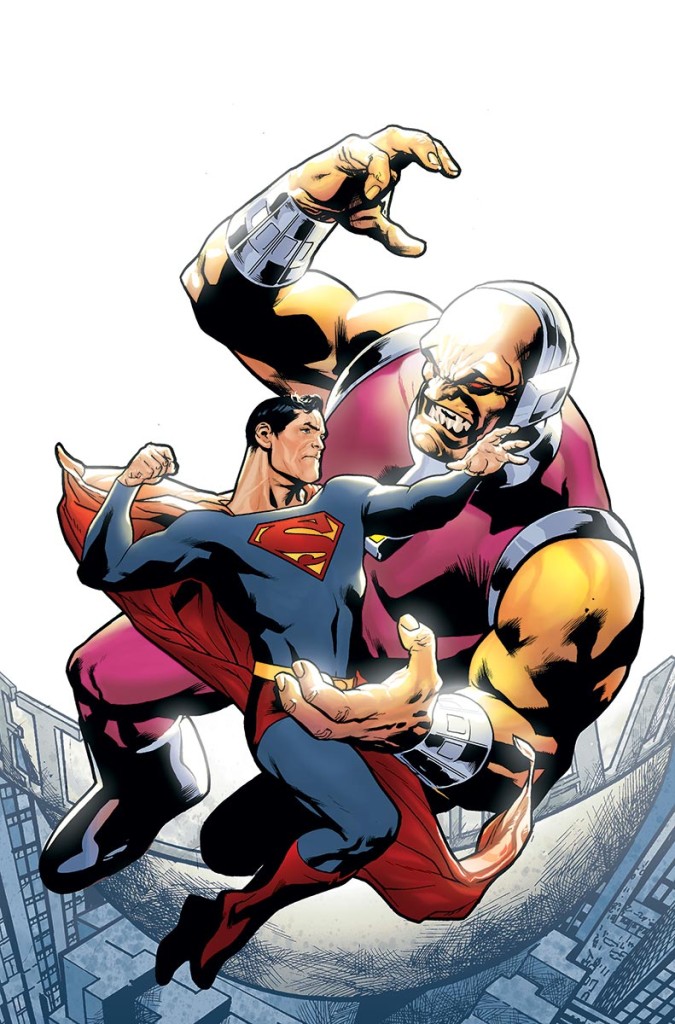 (Yes, I know I should do five thoughts, really, but we’re recording the second episode of Baxter Building today, and I’ve got to get caught up.)

One.  This collection of comics exists for reasons I can only guess at.  Issued in 2013, this sorta flimsy trade paperback collects DC Comics Presents issues #27-28, #36, and #43, as well as Superman Annual #11, the classic “For The Man Who Has Everything” by Alan Moore and Dave Gibbons.  Mongul, created by Len Wein and Jim Starlin, is basically the DC re-skin of Marvel’s Thanos, who is himself Jim Starlin’s analogue for DC’s Darkseid—and it says too many revelatory things about me that I eschew the mercenary zeal of someone ripping off their own rip-off when it’s someone like Rob Liefeld but exalt it when it’s Jim Starlin—so, like Thanos, Mongul is basically a guy with death’s head grin and shit-ton of muscles but also a bunch of crafty plans and tools and a tendency to start the game when he’s already at your one-yard line.

As I said, I can only guess at why this collection actually exists.  Was Mongul a thing in 2013?  Or did DC issue a trade paperback because after Marvel’s success with The Avengers, Thanos was indeed a thing and here was a chance to cash in on second hand library trade paperback curiosity?  My only-slightly-more-sensible alternate theory is that the movie Man of Steel was released in 2013 and DC needed to get a lot of Superman trade paperbacks into print and anything that at all resembled the tone of the Zack Snyder film had that much more pull of stuff that didn’t.

This thought occurred to me after reading the punch ’em up of “For The Man Who Has Everything,” where an enraged Superman cuts loose against Mongul, tearing apart a huge chunk of the Fortress of Solitude in the process.  Reading it this time around, the fight kinda reminded me of the no-holds-barred Supes-vs.-Zod finale of Man Of Steel.  You, as a reader, are supposed to be kind of terrified of it, this fight makes clear in a way the movie’s fight didn’t.

Two.  The pre-Crisis DC Universe was kind of like an old high school yearbook, one which creators and readers would sit down and flip through from time to time.  The nostalgia was part of the machinery at this point.

Well, either that, or there was a certain je ne sais Alzheimers motif going on.  I mean, in this slender trade paperback alone, check out this banner: 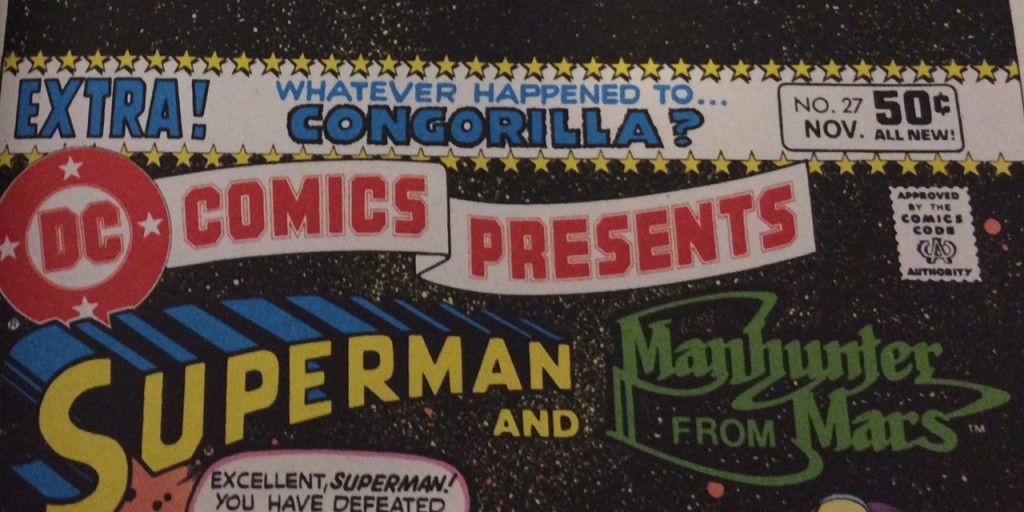 and this story title: 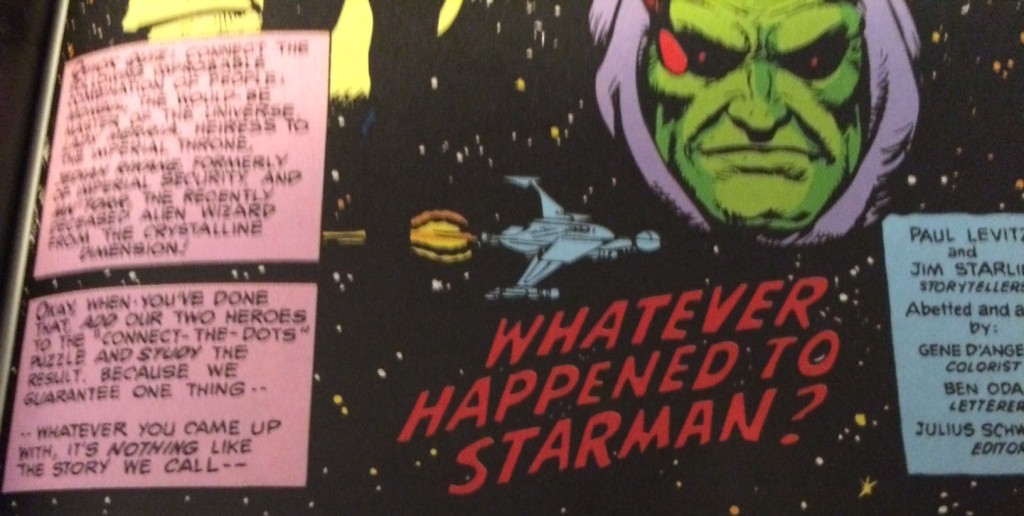 and this (unresolved) cliffhanger: 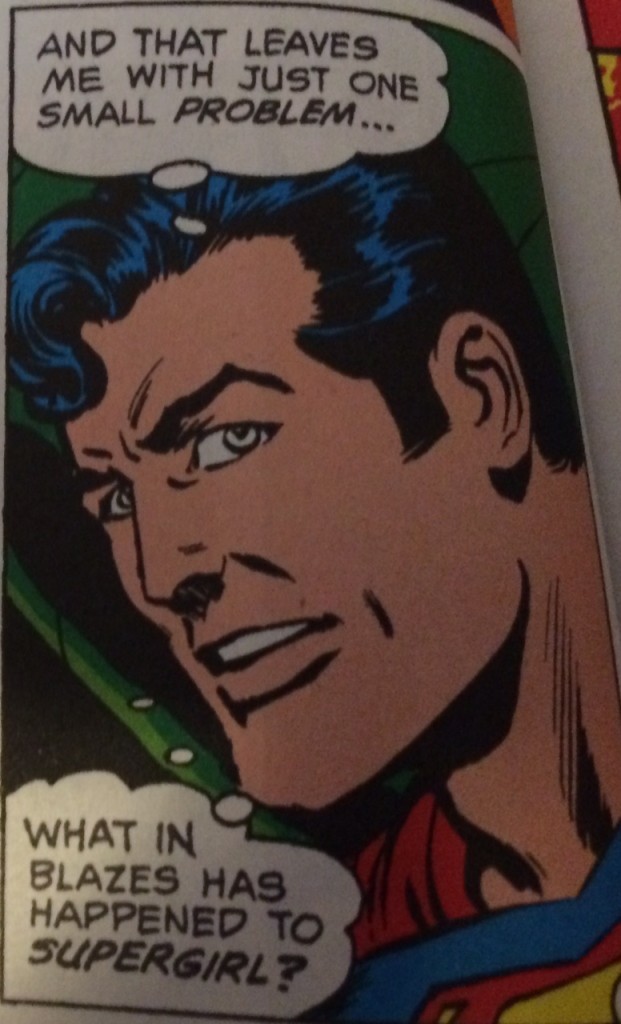 Throw in Alan Moore’s Whatever Happened to the Man of Tomorrow and it’s not hard to imagine the pre-Crisis DC Universe as a doddery academic type, the kind that pats down his pants pockets and wonders “Whatever happened to that idea I had for a cross-dimensional wormhole spitting out imperfect duplicates onto a planet where people could only communicate by clutching telepathic grass?”  No wonder the tone of the New52 imperiled so much distress and embarrassment?  Nobody wants to see an absent-minded academic pull on some leather pants and suddenly start talking about how *edgy* he is!

Three.  And this is how I figured out the importance of The Legion of Super-Heroes to pre-Crisis DC.  After all, the Legion are first and foremost as a bunch of kids in the far future who basically sat around and asked “Whatever happened to…” and then would go back in time to find out.

The Legion is so Ouroborian it’s a miracle they weren’t invented by Borges.  Starting out as perhaps the most brilliantly transparent shills to comic book readers ever created—they are literally a super-powered fandom—they went on to embody the perils presented by an industry populated by the fans devoted to the source material they now shepherd.

Take, for example, this collection’s reprint of DC Comics Presents #43, wherein The Legion of Super-Heroes have to help Superman defeat the combined menace of Mongul and the Sun-Eater, but not before debating whether or not in doing so they will create a time paradox:  “Jimmy Olsen has called us for help.  We have to decide if we should answer.  Should we risk upsetting the laws of time travel?” For two pages, the Legion debates helping with exactly the kind of missing-the-point commitment to exactitude that editors might debate approving the use of characters in a crossover.

It’s hard for me not to see this kind of thing as being deleterious to the story’s excitement.  At one point, Brainiac 5 points out, “we have no risk of changing the past by interfering—our history clearly shows the earth survives. We only put only our lives at hazard!” which I guess does a great job of establishing the Legion’s heroic bonafides but definitely dampens the dramatic stakes as far as the earth and sun-eating is concerned.  And yet, this kind of thing is precisely the stuff Legion fans used to chow down on before the future became its own deep cosmology and the LSH had more to do than just plot another trip in the time bubble.  “Do we dare change time?” asks The Legion, just as Paul Levitz, in writing this issue, must’ve asked himself with a shiver, “Do I dare bring back Ferro Lad?”  (Ferro Lad, who had first died protecting the future from the Sun-Eater, is actually described more thoroughly and with more complexity than Mongul.)

At the end, when Superman weeps for the death of Wildfire, it’s suggested that there are mysterious holes in Superman’s power of total recall.  (The Legion have to remind him that (a) Wildfire is just energy, and therefore can’t be killed, and (b) Wildfire is a total asshole, and nobody should be sad at the prospect of Wildfire dying.)

“Whatever Happened to Superman’s Perfect Memory?” is the question suggested by the end of DC Comics Presents #43, but it is a question for another story, another story that seems oblivious to its own obsession with obliviousness, where the only two events worth crafting a story around are the trauma of forgetting and the joy of remembering, the two strongest events for a  comic book collector, each capable of being felt with no more than the touch of a longbox.

One comment on “Three Thoughts: Jeff vs. Superman Vs. Mongul”