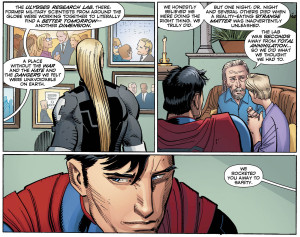 Reading the third issue of Geoff Johns and John Romita Jr.’s Superman, I found myself both enjoying the issue and fascinated by the ways in which Romita’s art — with the lovely Klaus Janson inks that give it a rougher, blockier edge than other inkers, and Laura Martin’s bright colors — disguise the fact that, in many ways, “The Men of Tomorrow” is both a Greatest Hits of Recent DC Superman Stories and the chance to finally move past a lot of tropes that are beginning to feel a bit tired.

By the end of #34, the third issue in the run (out tomorrow, so I’ll avoid spoilers), we’ve finally met the villain of the piece but the overall arcs of the run remain unchanged: Superman has discovered Ulysses, who is essentially an alternate version of himself but from Earth, presenting us with two very, very familiar Superman themes at this point:

• A Superman (or, in this case, Superman analogue) who might not be trustworthy, and
• A Superman who gets to go home

The former is something that DC has become increasingly fascinated with. Both Earth-2 and Injustice feature Superman-Gone-Bad as a major plot point, after all, and in the “main” DCU, Grant Morrison’s run finished with the New 52 Superman facing off against the weird genericized Superman monster from the alternate world (All-Star Superman also featured the hilariously Scottish Kryptonian heavies).

The latter, meanwhile, may be a lesser Superman trope but one that Geoff Johns set in motion at the very end of his Action Comics run some years back, when he brought back the Kryptonians from the shrunken Kandor and set the “New Krypton” storyline in motion (A storyline that, while it does fall apart at the end, is as close to 52 as DC has managed since that series ended, I maintain).

With “The Man of Tomorrow,” Johns definitely isn’t breaking new ground in terms of plot, but there’s something to be said about the execution. By bringing in Ulysses — and also with the introduction of the villain in #34, who has a certain level of deja vu to those readers who remember Infinite Crisis’ “Sacrifice” storyline — Johns gets to have his cake and eat it too, creating a way in which to explore those themes without actually altering the classic Superman status quo in any way. In fact, as the scene in the Daily Planet in the first issue showed, he’s seeming reconstructing that status quo, which has fallen into disrepair in the New 52. 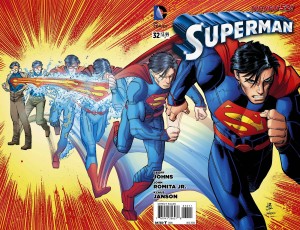 Because of this — and, in many ways, because of the way in which Superman is essentially a passive observer for much of these three issues to date — Johns’ Superman is the most Silver Age he’s written so far, and the most traditional version of the character seen since Morrison jumped ship (As I said in the podcast, the Calvin Ellis Superman in Morrison’s The Multiversity is very Silver Age, too, in many ways). He’s not the Silver Age Superman — I suspect that Johns is too enamored with the melodramatic character dynamic and angst of the 1980s to deliver the hyper-competent, paternal Superman of the ‘50s and ‘60s — but he is kinder, calmer and quieter than might have been expected from Johns’ previous outings with the character.

That kind of hero may not necessarily square with Romita Jr.’s artwork, at least in theory — Romita Jr. is an extremely dynamic, overblown artist in the best possible way; his characters overact, and feel constrained and uneasy when not in motion. And yet, there’s enough action in the stories to show off those chops (even if it’s not necessarily the action you’d expect — Superman running through a room changing his costume, say, or flashbacks to Ulysses being sent from Earth), and somehow the tension Romita brings to the quieter scenes adds something to the experience, rather than contradicting it.

That tension also, as I said above, disguises Johns’ story in some way. You expect something to happen at any moment, but the dramatic moment in the scene is Superman being told that he’s welcome in someone’s home, or something equally… small. What should feel like a disconnect in tone between the story and art instead works to the overall comic’s benefit; there’s a sense of uncertainty and surprise in what is, in many ways, an extremely conservative, traditional comic. Johns is putting the toys back where they “belong,” and yet the whole thing reads fresher and more exciting than that exercise should be to jaded eyes. I know where he’s going, ultimately, but I can’t quite tell how he’ll get there.

Whether or not this balancing act will be able to be sustained long term isn’t clear — we have no idea how long either Johns or Romita Jr. are staying on the title for, or whether the bloom will fall off their rose sooner rather than later — but for now, Superman is one of DC’s most curious books, even though it’s not necessarily doing anything new, per se. Whatever happened to the man of tomorrow, indeed.