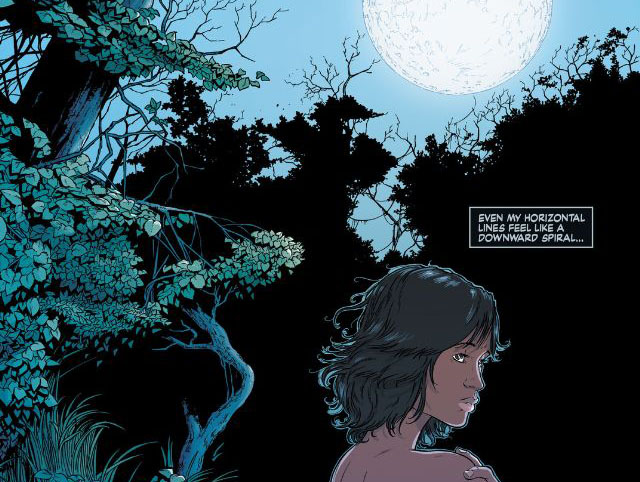 But that ignores the other, much simpler fact about Vertigo, which is this: sometimes, it’s just a really reliable source for propulsive, pulpy entertainment. Y The Last Man might be the best example, but even books that are usually lumped under the “auteurist” category were successful because they were gotta-read-the-next-issue engaging–Transmetropolitan and 100 Bullets and stretches of The Invisibles and Hellblazer, and even, for all its many flaws, Preacher all may be associated with specific creators, but they’re also just really entertaining stories.

That’s what came to mind when I read these three new(ish) Vertigo collections–the first volumes of Unfollow, Clean Room, and Jacked: these books felt like trad Vertigo to me in that sense, even though there’s not a single wise talking cat to be found. 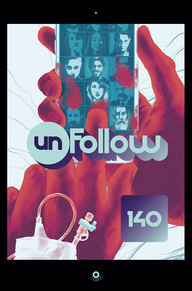 Unfollow is probably the strongest of the bunch for me, at least from a propulsiveness perspective. From Charlie and the Chocolate Factory to The Long Walk to Hunger Games to Lost to Battle Royale to Wicked + The Divine to even the dumbest TV reality show, there’s something about books that start with a defined number of characters trapped in a confined space (or confined situation, at least) that has always appealed to me.

It’s partially a weird mental laziness, I think–I often wonder when writing a story how to pick the spot where it starts, and even my favorite writers (looking at you, Neal Stephenson) have a really annoying habit of not knowing quite where a story ends, and both those things drive me nuts. Building your story around a specific event neatly sidesteps that problem: the structure of the story is defined by the framework of the event. You introduce characters to the reader as they are introduced to each other and/or the audience, you track them until the game ends (or the situation is resolved), and we all go on our way.

Rob Williams’ story for Unfollow does exactly that–it’s the Willy Wonka paradigm (eccentric rich guy creates elaborately weird situation in which to bestow a gift on one or all of a select group of people) for the social media age (the subtitle 140 Characters is a genuinely likable pun) with a bit of Battle Royale thrown in (violence!). The characters are sketched distinctively enough for this sort of story–it’s the Lost thing of providing an archetypal character for memorability and then layering depth on as we get to know them–and the plot moves agreeably quickly.

The real star, though, is the art and coloring. Art comes primarily from Mike Dowling with color from Quinton Winter, and it is gorgeous. (R.M. Guera draws one issue with color from Guilia Brusco and it’s fine, but Dowling and Winter are the stars here) Dowling’s art has some of the linework of a Michael Zulli or Charles Vess, but with a more grounded quality than those two tend to bring. Backgrounds occasionally dip out, but they’re always there when they’re necessary and the scenes are always carefully staged and well-blocked. Winter’s coloring is also gorgeous, and the main reminder that Vertigo is in a very different place than it used to be. This is a carefully chosen, full palette of color, as far as possible from the eight shades of yellowy-brown that used to characterize Vertigo books.

The series may be trying for something deeper; the story, once told, may be more than just an enjoyably propulsive elimination game, but even if it isn’t, it’s worth following. 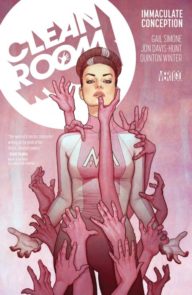 Clean Room didn’t excite me quite as much, but I honestly couldn’t tell you why. At every step of the story, I felt like I was enjoying it. I was curious to know what would happen next, how the (genuinely) horrific events of the prologue impacted the present-day story. Gail Simone is an experienced writer, and one whose work I’ve enjoyed before. She works in multiple tones (it’s strange to remember now that she broke into the industry by way of an online humor column), and is able to deploy more than a few of them here.

It also avoids most of the obvious pitfalls. The story centers on reporter Chloe Pierce and her attempts to understand the secrets of the Honest World Foundation, a somewhat Scientology-esque religion/cult led by a woman named Astrid Mueller. There are plenty of chances for the story to detour into obvious, tired Scientology gags, but Simone largely steers clear; she seems much more interested in using the structure and loose framework of Scientology to build a creepy, sci-fi/horror/conspiracy mash-up.

The art isn’t the problem, either. Jon Davis-Hunt, sometimes aided by colorist Winter, turns in gorgeous cartoony work that stands in stark contrast to the violence and body horror–like seeing Art Adams draw an issue of Preacher. Like Unfollow (and several of the other concurrent Vertigo launches), the art is almost self-consciously un-Vertigo, as far from Will Simpson’s scratchy lines or, again, the endless sepia colors of the 1990’s material as physically possible while still remaining the mainstream major publisher style.

And yet Clean Room ultimately somehow wound up being less than the sum of its parts. I never found myself attached quite enough to any of the characters, nor convinced enough of the jeopardy of their situation, for any of the book to stick in my brain. I’d be willing to give it another shot if I came across the next trade in the library, but for whatever reason it didn’t have the ambiguous “stickiness” that characterizes the best airport novels. 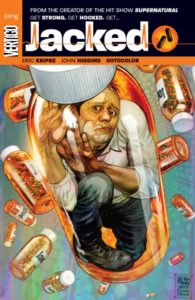 Jacked comes a little closer to that ideal, possibly because it was a limited series and is thus as a collection reads as a mostly self-contained story (albeit one with an easy sequel hook on the end). The problem with Jacked, though, is just how familiar it feels: regular middle-aged shlub gets some magic pills that make him superstrong–it’s a little bit Major Bummer: The Later Years, a little bit Luther Strode (but much less stylish), even a little bit The Filth, at least on the surface. This is well-trodden territory, and first-time comic writer Eric Kripke (who created Supernatural for TV) doesn’t seem to have quite enough to elevate it.

He sells the middle-agedness well, that’s for sure. It’s clear that this is written by a guy who has dealt with the onset of the bad knees and acid reflux and all the other horrible parts of middle-agedness, and weirdly what I found myself wanting from Kripke is just a quiet suburban story–a comic book American Beauty, only not terrible. As soon as the superpower enters into it, I found myself ever so slightly … bored, I guess? Which is a weird word to use for a story where a dude bludgeons his drug-dealing neighbor into a pulp, but there it is.

Kripke is good enough that the pages keep turning, and John Higgins (with assists from Marc Olivent and Sally Jane Hurst) is an experienced, professional artist who keeps the story clear and easy to follow. But Higgins, like the story, seems much happier with the banality of life and the more simple violence (a dog clamping its jaws on a dude’s wrist; a non-super-powered beating) than he does with the super-powered fisticuffs. (Higgins’s art is also fascinating but it, more than either of the two above, makes it clear just how lurid the new Vertigo coloring is. He feels like a totally different artist from his Pride & Joy or Hellblazer days, despite having kept his style largely the same.)

It’s nice to see Vertigo releasing a steady stream of less-pretentious material, and even nicer to see them embracing a wider variety of art styles for these stories. Not every one has been a memorable masterwork, but, like airport novels, every one of them has been a pleasant way to burn off a chunk of afternoon.  (Except for The Dark and Bloody. I just haven’t been able to get into that one at all–as soon as the psychopomps creep back into Vertigo, I guess I tune out.)