More than a week late in returning to posting here, and I was starting to worry. I wasn’t deeply enough into anything i was reading for it to generate a full post’s worth of blather here, and I couldn’t tell if the problem was me or the material. This problem turned into a frustration spiral, fueled almost entirely by self-flagellation (“why don’t I read anything good!”) and concern about comics in general (“what if current comics just aren’t good?”).

And then two things happened: I read a bunch of stuff that was pitched at just the right level of light fun and/or accessibility, which was apparently what I was in the mood for, and I remembered that I could just compile a bunch of shorter write-ups here.

AND THEN EVERYTHING WAS OKAY AGAIN FOREVER, THE END 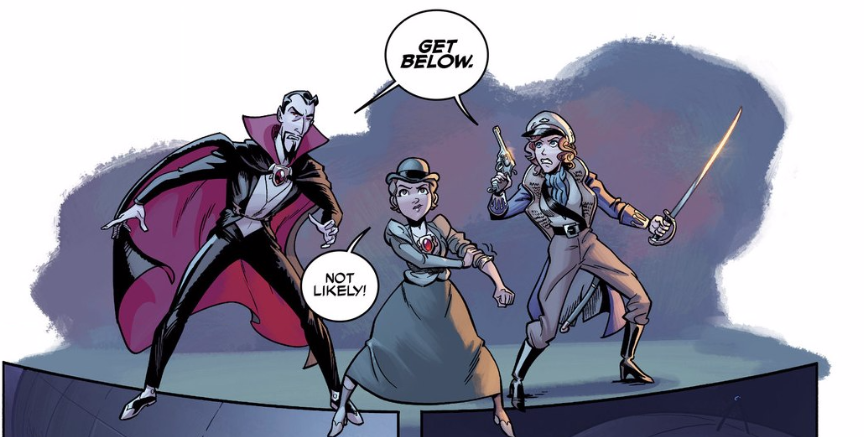 I was very, very happy to see the arrival of Dracula the Unconquered #3. It’s been at least three years, maybe more, since the last issue of Chris Sims and Stephen Downer’s pulp adventure take on Dracula, and I was initially happy just that it existed. One of the terrific things comics offer is that same thrill as in music, of watching people work their way up through increasingly larger venues and refine and change their sound as they do it.

I’ve used that analogy before in reference to Sims, and I think part of the reason it feels so apt in his case is that he, like so many young musicians, is incredibly open about his influences and reference points. Which is a long, roundabout way of saying that Chris Sims has made it abundantly clear that he is a dude who really digs Dracula. And this was his chance to write the Dracula that he wanted to see, incorporating elements of the original Bram Stoker version, the Marvel version, and lord knows how many others.

They self-published two issues digitally, and then they stopped — presumably Sims was focusing on his Marvel work, and I seem to remember him mentioning that life got in the way for Downer, as it does. Now, two years later, the continuation has surfaced on Comixology, and it’s a pleasure to see.

The tone here is pulp adventure, Dracula and his new assistant, a librarian named Thalia, working against an army of the undead and fighting air pirates in zeppelin battles … this is Sims mashing up a few dozen things he likes, and Downer drawing them in a clean, cartoony style. I can’t point to any one element of the comic that I especially loved, and there are echoes of other books here that weren’t present when I read the original two (especially Nimona, which hadn’t even been created when Sims launched this book in 2011), but Sims clearly has such enthusiasm for the subject and Downer’s art is so … “cute” and easy to look at, the whole thing lands with exactly the tone of pleasant likeability that I was looking for this week.

Also scratching that itch was the trade collection of Al Ewing and Alan Davis’s Avengers: Ultron Forever. I’ve tried to read these books before, on Marvel Unlimited, but they originally appeared in special one-shots of New Avengers, Uncanny Avengers, and Avengvers, and those don’t appear sequentially in Unlimited and apparently my level of interest in this story was insufficient to overcome my unwillingness to futz around to that extent in Unlimited’s notoriously cranky interface.

Which is a damn shame, because this — like so much of Al Ewing’s other writing — is delightful fun! It’s a standalone story premised on Dr. Doom pulling a team of Avengers from throughout time to fight Ultron in the future. That’s not a premise that’s inherently promising (it’s something that feels like it happens twice a month in comics — there are emphatic echoes of Kurt Busiek and Carlos Pacheco’s similarly-titled Avengers Forever, but also of Days of Future Past and Spawn/WildC.A.T.S and god knows how many other things that I’m forgetting), but what’s great here is just how well done it is.

Ewing is something of a master at making things seem big and fun and new and exciting while also recalling a generalized, platonic ideal of the “Marvel style from back in the day” where “back in the day” is whatever era of Marvel’s books you most enjoyed. I tend to spot the echoes of the 1980s stuff I grew up with, but I can imagine someone else seeing 1970s cosmic, or focusing on the obvious Kirby love. This book (which I eventually read as a trade from the library) applies that skill to the “cross-time team” trope, and the result is a perfect superhero adventure comic.

Ewing also continues his trend of selecting diverse characters to staff his books with, which is also welcome. I tried to (re)watch some of Avengers: Age of Ultron on cable the other day, and the overwhelming white-male-ness of the main cast as the movie opens was striking. (The movie also felt plasticky and boring as hell after Fury Road and Force Awakens and the Marvel Netflix stuff, and my reaction to it now, after mildly enjoying it in the theater, has drastically diminished my interest in Captain America: Civil War. Oh well.)

Alan Davis’s art is … well, it’s Alan Davis’s art. It’s great, classic super-hero stuff; his style never felt of a particular era to me (unlike, say, the Todd McFarlanes and Rob Liefelds of the world), and as a result it still works as well today (on a story like this) as it did on Captain Britain thirty years ago.

The book did not leave me any wiser, or richer, or more engaged in some kind of overarching Marvel Universe metanarrative (although, in classic Marvel style, it does include footnotes directly referencing past issues from across Marvel’s long history). It just made me smile, and turn the pages quickly, and enjoy some superhero fiction on exactly the surface level that I needed at that time. Good stuff.

The first three issues of Tom King and Mitch Gerads’s Vertigo miniseries Sheriff of Babylon, on the other hand, required substantially more engagement. These are not books for casual perusing, flipping pages to see robots punching thunder gods or whatever. But the effort you put in is rewarded. There’s some Le Carre here, some wonderfully tedious reality to some of the statecraft … but not so much that there’s no action. There’s some [Generic Iraq Story] here, because that’s the genre the book is working in, and it’s a genre that’s already been well-mined.  There’s a lot of Three Kings here, that modern, ironic, knowing look at American soldiers working a job in sandland that they don’t fully understand. And you can feel King’s own CIA experience as well, lending some heft and verisimilitude to the whole effort. It’s an impressive conflation of influences and interests.

Every time I write about King’s work, I mention his formalist bent, and that’s present here as well. But I think I sometimes (already!) take it for granted how well he executes them, and how they tend to serve the story rather than just being pointless filigrees to it. I don’t think I would’ve enjoyed the book quite as much if hadn’t had #1-3 to read in a chunk–this is one that’s going to read really well in collected edition, if King and Gerads keep the quality level up, and could even become one of those canonical perennial bookshelf comics.

Gerads is similarly easy to take for granted. His work is pretty unflashy, but it’s remarkably clear even when conveying beats that require a thorough grasp of space, or speed, or the passage of time. The characters are all well-sketched and well-acted, even when similarly dressed, and he meshes well with King’s formalism–he’s either selling exactly what King is asking for in the scripts, or he’s capably matching his own pacing and layout choices to King’s voice.

The art and script –and the coloring and lettering, for that matter — all work together to provide crucial inroads into following what could be a confusing story, which is exactly what good comics SHOULD (but so often don’t) do. And it’s that alchemy, that sense of a whole team working together to tell the story, that helped this much meatier comic be part of this list of things that I’ve characterized as “light fun”. This book is a lot of very good things, but I don’t think I can call it light.