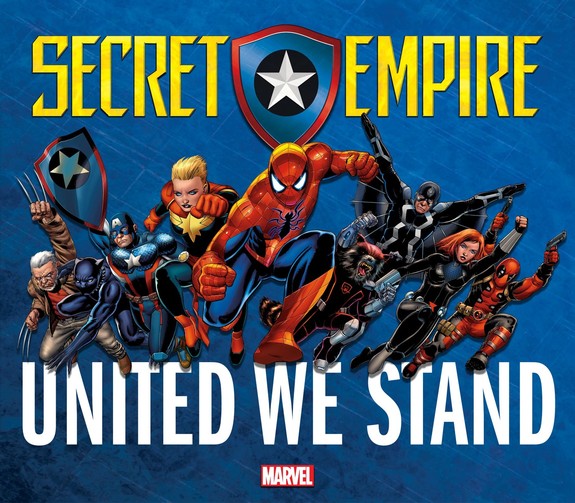 0:00-34:58: Greetings, and wishes for a happy new year!  Believe it or not, we are super-hasty in this part and in literally less than a minute we are discussing….Rogue One: A Star Wars Story!  Jeff finally saw it after hearing good things about it and…well….yeah.  A little disappointed, y’all. Turns out Graeme didn’t like it much, either, so listen to a lot of interstellar griping with the occasional tie to a useful article.  FULL SPOILERS! JEFF TALKING ABOUT METATEXT! LOTS OF GRIPING! STEERING US INTO MODERN AMERICAN POLITICS STARTING AROUND 23:09 (hey, this was recorded on the day Trump shit-talked John Lewis) AND EMERGING AROUND 34:58.
34:58-1:05:13: Okay, it’s not too hard to imagine how we got from Trump to Marvel, I hope, but yeah that’s where we ended up, considering Marvel has been doing some really strange stuff recently? “Free” overships, Secret Empire and its promotional art (with a long digression from us about how well Black Panther is currently selling), and then we’re talking about the casting call descriptions for The Inhumans TV show. Also discussed: Imax, Who Watches The Watchmen in Imax?, the opening to the theatrical release of Buck Rogers in the 25th Century, the Sinbad movie that never happened, Candle Cove, interviewing Max Landis, and all too much more.
1:05:13-1:16:54: Other things Jeff didn’t enjoy and is surprised and baffled he didn’t: Superman #14 by Peter J. Tomasi, Patrick Gleason, Ivan Reis and Joe Prado featuring characters invented by Grant Morrison for Multiversity.  Also discussed:  the next stage in the Rebirth master plot with the Batman/Flash crossover and more.
1:16:54-1:28:07: Oh, and another thing that Marvel is doing that’s weird and does not seem good: modifying their digital code plan so you no longer get a digital copy of the issue you’re buying!  Jeff talks about how that and Rebirth’s publishing schedule may be pushing him to make a hard decision he doesn’t necessarily want to make.
1:28:07-1:49:10: Graeme re-read Morrison’s run on New X-Men and also Neil Gaiman’s Book of Magic!  What’d he think? And how much will Jeff interject? (the answer: “a lot” probably is not that much of a spoiler, sadly.)
1:49:10-2:16:36: By very sad contrast, Jeff finished the digital trade of Son of Satan Classic, a big ol’ collection of one of the stranger heroes from Marvel’s very strange superhero horror phase.  Jeff talks about the character, why the character doesn’t work, and why Son of Satan #8 is the only SoS comic you really need. Also discussed: misunderstanding superhero comics and Understanding Comics; Tom Scioli and more.
2:16:36-2:43:41: In talking about books where we actively find ourselves eager to find out what happens next, Graeme talks about enjoying the velocity of Justice League vs. Suicide Squad. Also discussed: the last issue of Civil War II, the first issue of Unstoppable Wasp #1, the most recent issues of Moon Knight by Jeff Lemire, Greg Smallwood, Francesco Francavilla, Wilfredo Torres, and James Stokoe, Plus a lot of other comics we’ve read!
2:43:41-end:  Closing comments! But first:  We make a plan for a January podcast episode!  Look for us on  Stitcher! Itunes! Twitter together and separately: Graeme and Jeff! Matt! Tumblr,  and  on Patreon where a wonderful group of people make this all possible, including the kind crew at American Ninth Art Studios and Empress Audrey, Queen of the Galaxy, to whom we are especially grateful for their continuing support of this podcast.
Next week:  Next week is another Wait, What?! (Wait, What?) Come back and join us, won’t you?