Amanda Conner and Darwin Cooke’s Silk Spectre is, on some levels, the most faithful of the entire Before Watchmen project. Not only does it begin with a reference to a scene from the original book — the breaking of the snow globe that is hijacked into Dr. Manhattan’s narrative in #9 — but Amanda Conner approaches the visuals of the whole thing with Dave Gibbons clearly in mind; it’s not just that she adopts Watchmen‘s nine panel grid for the majority of the series (There’s one sequence where she breaks the format, and it’s both smart and cute; as Laurie gets high on LSD, the format starts literally falling in on itself), she’s clearly paid attention to Gibbons’ eye throughout the entire thing, and works to recreate his staging in a number of places. Of all the Before Watchmen books, Silk Spectre feels like the one that has spent the most time actually paying attention to Watchmen. 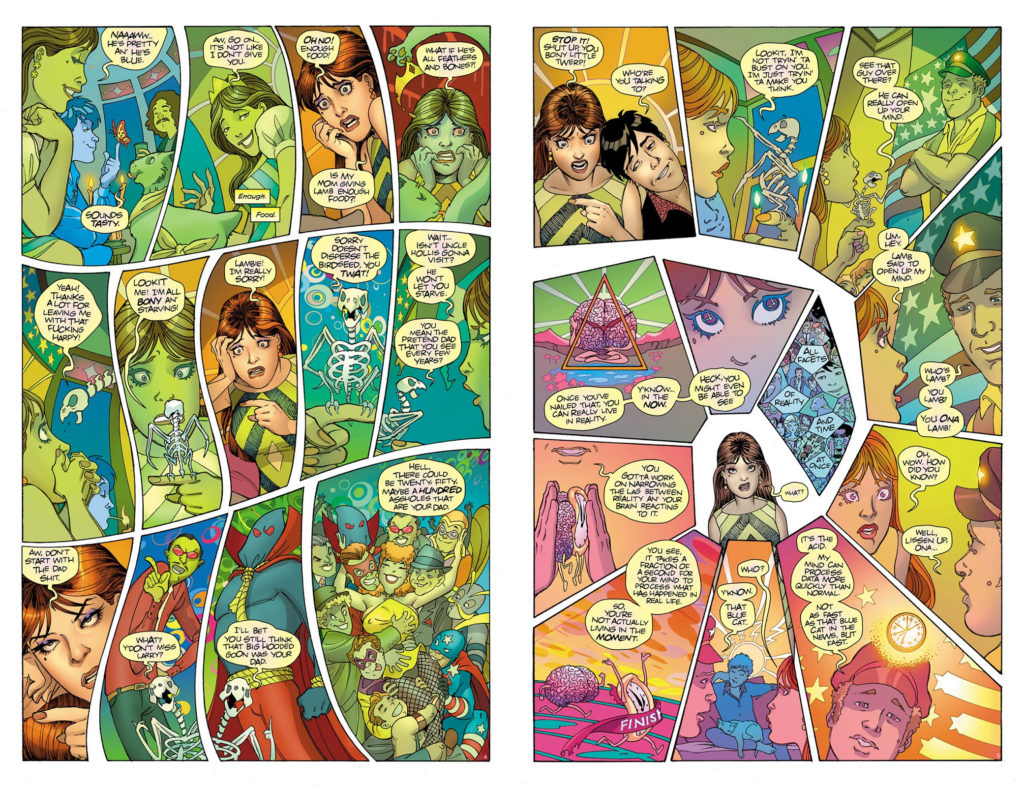 It feels strange to call Conner the unsung hero of Silk Spectre; she co-wrote it with Cooke and drew it, after all. Her’s is the largest contribution to the series, and yet, somehow I feel that she was nonetheless overshadowed by Cooke upon release. Comparing Silk Spectre with Minutemen, it’s clear that Conner was an active voice in writing the book — both in terms of overall tone and individual charactertization, this book reads very differently from Cooke’s solo series.

It’s more fractured and less chronological (More of the Moore Watchmen influence, again), less insular and more curious and concerned with the outside world rather than the internal narrative of its leads — as the original Watchmen explored the 1980s, this takes place for the most part in 1966 San Francisco, with Laurie dropping out into a sanitized version of the counter culture — and, ultimately, more willing to allow its characters to be complicated and contradictory without smoothing out the edges for readers. Once again, it feels more true to what Moore and Gibbons were aiming for in the original book. 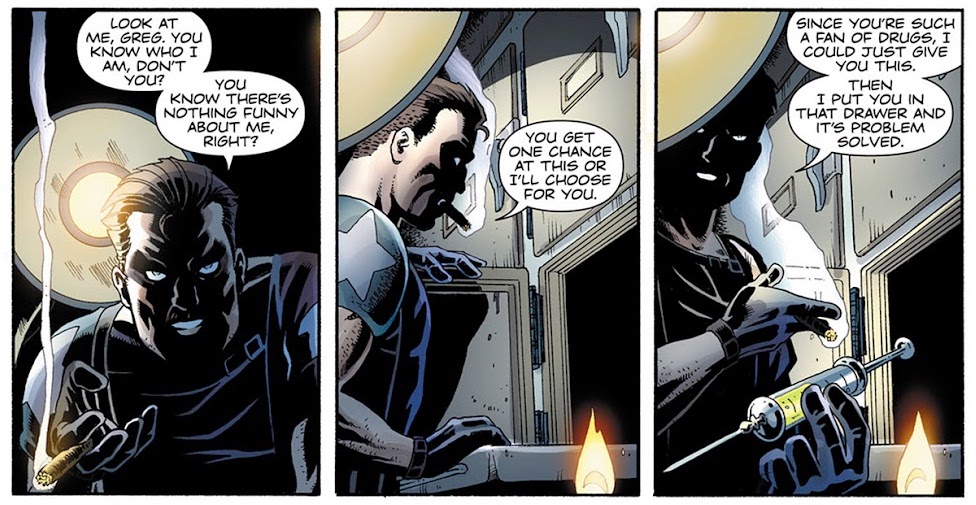 It’s tempting to say that this series outstrips its predecessor in a couple of ways, which would be entirely unfair — not only does Silk Spectre have different ambitions than Watchmen, it’s noticeably less ambitious (Although, I hasten to add, I don’t mean that as an insult in any way; Watchmen‘s ambition is its undoing in many ways, for me). Nonetheless, Silk Spectre‘s characters feel genuinely complicated and alive for me in a way that Watchmen‘s never do, with the latter book feeling the hand of its writer all too clearly, shuffling pawns around the board the entire time. Similarly — and perhaps sensibly, considering it’s the sole female-led Watchmen project — it manages to offer up the most three-dimensional, non-cliched women in the entire franchise. Not that that’s hard; Watchmen — the original book and also the larger storyline with all of this Before Watchmen ancillary material — is depressingly, claustrophobically, male.

The teenage Laurie is at the center of Silk Spectre, and Conner and Cooke lay groundwork for Watchmen that deepens her portrayal in that book significantly, both in terms of her complicated relationship with her mother, but also the ways in which her actions in the mid-80s are fueled by a more optimistic, stubborn and ultimately tragic self from two decades earlier. Sally, too, benefits from being shown as something other than the broken figure she comes across as in Moore and Gibbons’ work; there’s something unsettlingly rewarding about seeing her actively being a complicated figure who, over and over again, demonstrates how difficult she is to love, instead of simply having other characters tell the reader in pointed terms. 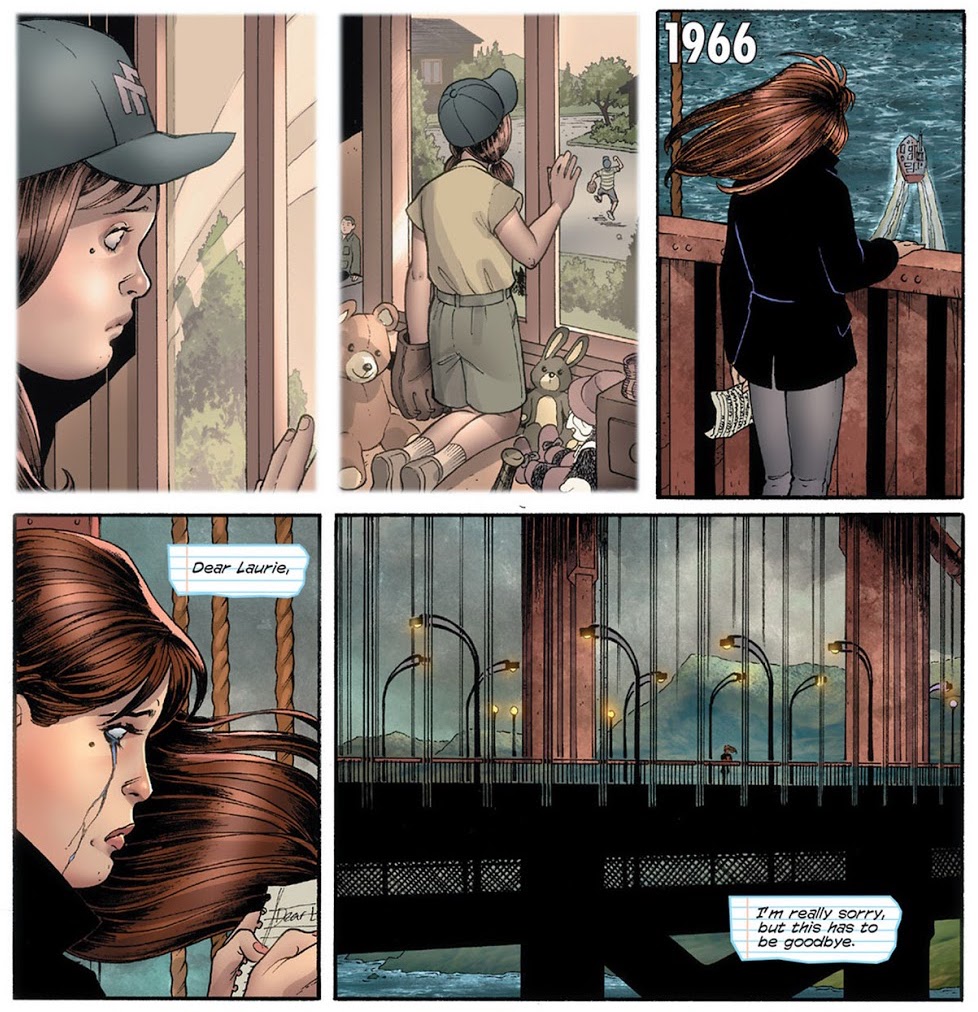 (In this, Silk Spectre completes a makeover started in Minutemen, in which Sally’s relationship with Larry is flipped so that she’s seen as the dominant one with Larry far more of a nebbish background figure than he comes across in the original Watchmen. Stripping one layer of victim away from Sally sits easier with me than I suspect others would feel, if only because the women in Watchmen have always felt particularly artificial and “male-gaze”-y in my eyes; YMMV, as the internet reminds us.)

Silk Spectre is far from perfect — the analogies of pop culture figures feels really strange and cowardly, especially given their importance to the overall plot, and it doesn’t get around to finishing its thoughts on some of the themes raised early on, particularly on how Sally’s sexuality informs Laurie’s behavior — but it’s probably the best of the Before Watchmen books on a number of levels. That’s not intended as merely faint praise; it’s a solid showcase for Conner not just as artist, but as writer, as well. Laurie is perhaps the most absent of the core Watchmen cast, but this mini feels like the showcase she deserved all along.

4 comments on “Wait, Watchmen 3: The Ghost of You Clings”